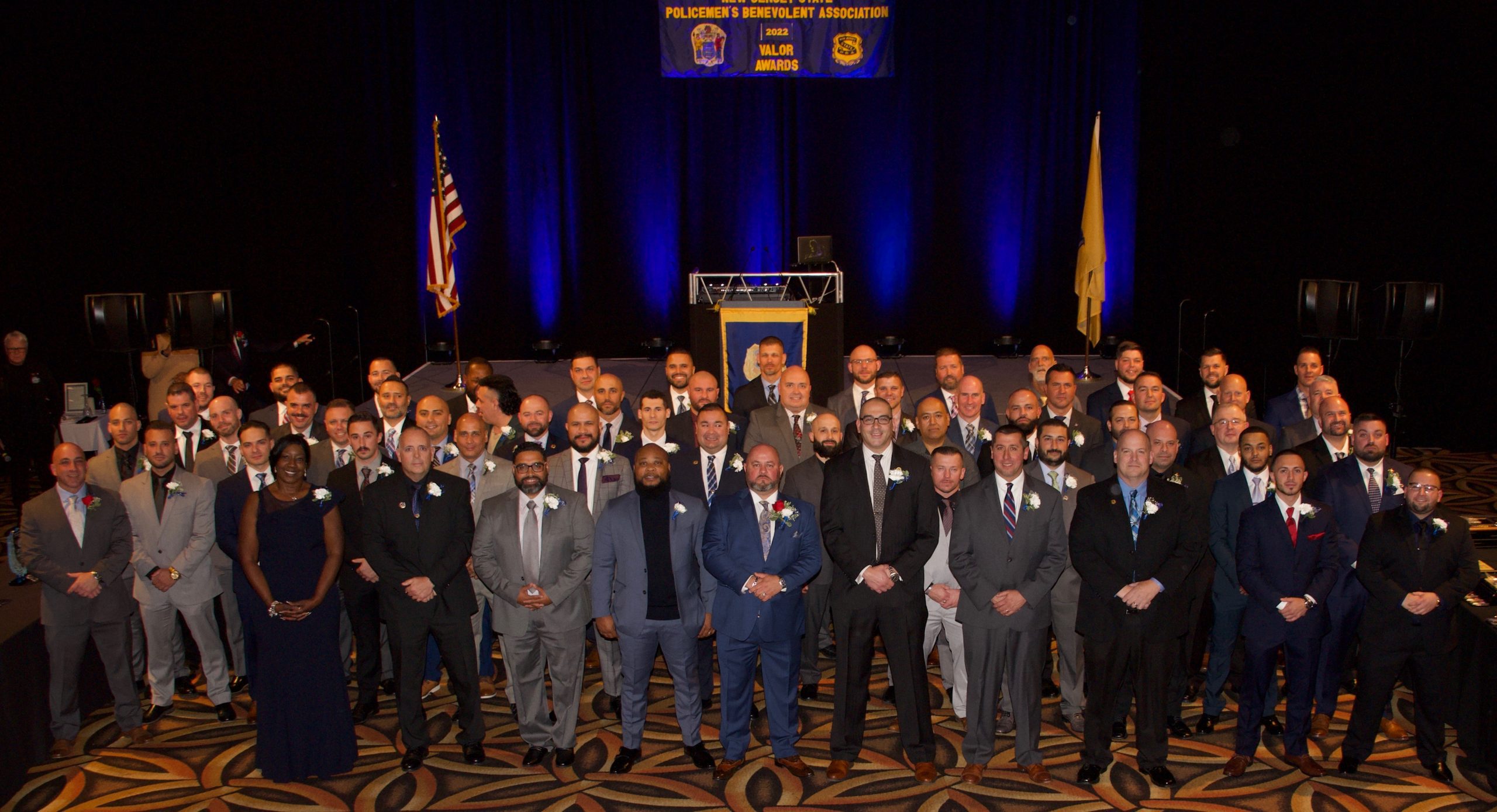 Why We Take the Oath

Picture this: It’s a fall Friday night. The air is crisp. The lights are bright. The bleachers of a high school football stadium are packed. Seems like any other game.

That was the case for Pleasantville High School football players and their friends and family members on Nov. 15, 2019. Until it wasn’t.

Robinson and several other Pleasantville PD officers were watching the game when chaos ensued. Gunshots erupted from the crowd, causing spectators to run.

“Once we heard shots ring off, we all kind of looked at each other in disbelief,” Robinson recalled. “And after that, of course, we naturally just ran toward the fire.”

With the help of bystanders and Detective Sergeant Brandon Stocks, Detective Astrid Aurelus, Officer John Marciante, Officer Xavier Evans and Officer Juan Morillo, Robinson was able to get a description of the gunman.

“Black jacket, gray sweatpants, and I’m like, ‘That could be anybody,’” Robinson detailed. “So I turn around and I see a guy, and to me he just stood out. It looked like he was running faster than everybody else, so I picked him out. Fortunately, I was able to catch him, and he ended up being the suspect.”

Robinson uses the word “fortunate” to describe that moment of finding the assailant, but it wasn’t just luck.

“It was a combination of everything,” he added. “I don’t know, I always try to think like that. I don’t know why in that moment, but I just thought, ‘Whoever did it is still here.’”

Fast forward to the 2022 PBA Valor Awards, where Robinson and the other Pleasantville officers were honored for their response. The award was a bittersweet moment because the shooting left a major impact on a local family. A 10-year-old boy who was hit that night succumbed to his injuries a week after the shooting.

The loss was a little more personal for Robinson than most because he grew up with members of the boy’s family. Robinson says he hopes he was able to bring a glimmer of peace to the family by catching the suspect.

“It’s why we strap our boots on every day and why we’re willing to go out and keep the public safe,” he said. “When everything first happened and everything kicked off, it was hard to feel like a hero because we lost a kid. Obviously, he was our main priority.”

He had been dispatched on a report of a suicidal man with Field Training Officer Robert Fariello and three other officers. And when they responded to the location, they found the man inside a bathroom clutching swords in each hand.

His arms bled from self-inflicted cuts and lacerations. Glancing at the man’s arm, Kokinakos realized the blades were sharp. And if the man didn’t calm down, he would need to take action.

Kokinakos lowered his tone of voice, attempting to persuade him to drop the weapons. He recalled the man muttering, “Kill me,” as he came at the officers, who were retreating into the adjoined bedroom. Closing the door to the hallway, the subject locked the door, trapping Kokinakos and Fariello.

Pleading with the man, Kokinakos asked him once again to drop the weapons.

“All that was flashing in my head was my family,” Kokinakos recalled. “Outside of the uniform, I’m a human being, too. I have people who love me. At the end of the day, he chose what he wanted. And at the end of the day, I had to get home. So did [my coworkers]. He put me in a situation I didn’t want to be in. But none of my guys were injured. Everyone got home safely.”

Reacting quickly, Fariello pepper-sprayed the man, who then suddenly lunged toward Kokinakos, swinging his weapon. Dodging the man’s sword, Kokinakos discharged his firearm, eliminating the threat.

Standing before his fellow brothers and sisters in law enforcement at the Valor Awards, Kokinakos described feeling a wave of emotion.

“It was a lot to take in, a lot of emotion behind it,” Kokinakos expressed. “I was just blessed to be here to accept the award. Hopefully, I don’t get put in that situation again.”

Despite only being on the job four years, Kokinakos admitted he had been in many situations like this one on Sept. 28, 2021. And he often carries with him something he learned in the academy that this incident seemed to have reflected so well: there’s no such thing as a routine call.

“It definitely took me to the next level,” Kokinakos said. “I don’t wish any officer to be in that situation, but like they say, in omnia paratus. Always be ready.

Being in the right place at the right time paid off for four Elizabeth Police detectives who snagged two armed suspects in the city’s port section on a March afternoon in 2021.

Detectives Michael Nicolas, Alexander Gonzalez, Luis Figueiredo and Rui Xavier — recipients of the Silver Medal of Valor — were assigned to narcotics that day, working in an area known for high crime and drug problems when a couple of people caught their collective attention.

“These guys were displaying the characteristics of an armed subject, so we started surveying them from a nondescript vehicle,” Nicolas explained, adding that the immediate sentiment was “they’ve got guns.”

The suspects, sensing the car was out of place, started to leave the area, but the quartet of detectives made their own move to catch up on a nearby street. Gonzalez, Xavier and Figueiredo exited the car and, just as they ordered the suspects to stop, the juvenile turned and fired a single shot at the officers. The second man’s gun jammed as he attempted to shoot. The officers were able to take cover but quickly made their move.

“The adult threw the handgun and began running. The juvenile also started running. They were both apprehended,” Nicolas said. “Four of us, two of them, we felt pretty confident we would be able to catch them.”

Figueiredo, entering his 17th year on the job, said the officers reacted the way he’d expect, given what they typically see in Elizabeth.

“You’re never used to it, but I think our natural instincts kicked in and we just reacted. We used our training, our experience, and that’s how everything unfolded,” he described. “Our concern with that incident was the time of day. There were a lot of people out on the street. Once the two suspects shot at us [and] started fleeing, we thought it was a better decision to just chase them down — and we did.”

As he enjoyed the Valor Awards with his fellow honorees, Figueiredo considered what being recognized for their heroics meant.

“It feels great … like we served our community,” he said. “We got two dangerous people off the street.”

The Bigger They Are…

In a span of two minutes on July 25, 2019, Washington Township Officer Valeriya Bagmut successfully took control of a male suspect she described as much larger than she is. This proved to be a day of complete surprise, when Bagmut responded to a domestic where the
suspect attempted to physically assault a woman.

As the enraged suspect repeatedly punched Bagmut on the left side of her head, she felt her eye start to swell. But Bagmut never backed down, and after carefully observing the suspect’s actions, she was able to subdue him.

“You have to continue watching people and their movements,” Bagmut shared. “It’s important to notice what they’re going to do, as well as both their tone and body language. Sometimes, people can be deceptive. So I definitely took that away from this incident.”

When the female at the scene managed to flee in a vehicle, Bagmut made her way back to the residence and confronted the suspect. While she was handcuffing the enraged man, he turned around and attacked her.

During the struggle, the suspect knocked the microphone from Bagmut’s radio off her, making it impossible for her to call for additional help. When the assailant attempted to reach for her duty weapon, it fell to the ground. Bagmut quickly got hold of the weapon while he tugged at her right arm.

As the suspect tried to land blows to her arm, Bagmut fired a single shot, which ended his attack. She handcuffed him immediately and collected her radio to call for help. While waiting for backup, Bagmut assessed the damage to the suspect and provided medical assistance.

“This was my first experience of being physically assaulted like that on the scene,” Bagmut expressed. “A lot of it is training and what we are taught — a little bit of instinct if you are getting pummeled, and you figure out how to survive.”