A bouquet of gratitude 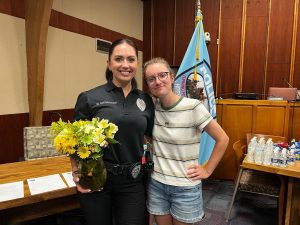 Hopewell Local 342 member Maria Gavdanovich received a bouquet of flowers as a thank-you for helping transport a resident to the hospital.

When the doors to the Hopewell Police Department opened on July 6 to hire new recruits, Hopewell Local 342 member Maria Gavdanovich didn’t expect to see someone she had met on the job two months earlier.

At first, Gavdanovich didn’t recognize the 21-year-old. But when she approached Gavdanovich with a flower bouquet in hand and expressed her gratitude for Gavdanovich helping transport her to the hospital after experiencing heart complications, the memory rushed back.

“It was very sweet of her,” Gavdanovich related. “That was the first time that somebody came and brought us flowers for handling a medical call. Overall in our town, we have great residents who support our police department. So in a way I’m not surprised that she came to the station, but it was unexpected too.”

The incident happened in May, when Gavdanovich received a medical call of a young woman recently released from the hospital who was having a heart ablation and a panic attack.

When Gavdanovich arrived to the scene to transport her back to the hospital, she performed first aid and helped calm her down.

For Gavdanovich, it was just another day on the job, which is why it came as a surprise when she saw the young woman again.

“She was very grateful that we helped her out,” Gavdanovich remarked. “And I was happy to see her doing so much better.”

Gavdanovich seemed elated to hear that she was doing well and continuing with her education. And the kindness she expressed showed Gavdanovich that she really is appreciated.

“It just makes you feel great when people remember and are thankful,” Gavdanovich added. “Because we don’t just want to respond to calls, we want to get to know our community and build that relationship, so we can teach them something good.”