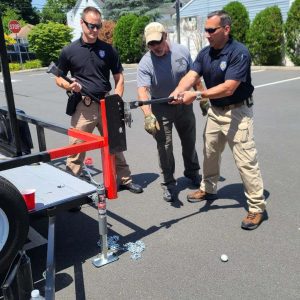 John Dapkins of Jersey Tactical Corporation demonstrates to two NJSPBA members how to use the Jersey Claw.

The way officers formed two lines in the parking lot behind the NJ State PBA office on June 25 seemed like some weekend calisthenics were getting ready to do down. Or it could have passed for an academy PT session, even if the officers looked a little older and a little, well, you know.

Unfolding here on a Saturday morning – and then again on a Saturday afternoon – was the PBA expanding its education program to a hands-on, tactical training class. The experts from Jersey Tactical Corporation (JTC) came to Woodbridge to teach members about forcible entry.

In the wake of the Uvalde tragedy, JTC owner John Dapkins Jr. reached out to PBA President Pat Colligan about doing the training that also included showing members how to use the Jersey Hybrid Forcible Entry Claw Door Breaching Tool. The Jersey Claw combines the operations of a halogen, sledgehammer, pry bar and window rake to enable users to breach a car where accident victims are inside or a school where an active shooter is rampaging. It is used by agencies across the country, including the New York City terrorism unit, which deployed it in June.

“Jersey Tactical has a breaching trailer to teach forcible entry, and this was a great opportunity to get our members some training,” Colligan explained. “This was geared for the first-arriving officer. We wanted to give them a chance to use the tool and, if they can, let the department buy it.”

The PBA also purchased three claws. Two were given away to members, one in each training session. A third has been stocked into the PBA’s pickup truck in case somebody in that vehicle comes up a situation where a lifesaving breach might be needed.

Following the Uvalde school shooting, Dapkins said requests have been pouring in for JTC to provide training in using the claw. Many of those requests have come from agencies in Texas.

Check out any of JTC’s social media platforms and you will see hundreds of videos showing patrol officers using the claw to save people’s lives. One of the latest shows Secaucus Local 84 members breaching a car to save the life of a lady inside. 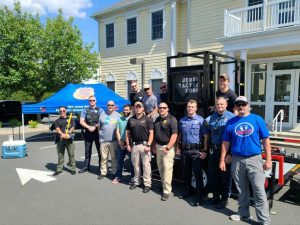 The NJ State PBA held two training sessions on June 25 for members to learn breaching techniques and how to use the Jersey Claw.

“Most of our saves are from service calls. The drug overdose. The heart attack. The car accident where the car is on fire,” Dapkins detailed. “The tool basically allows a patrol officer to arrive, and if there is a need for something in an emergency to preserve a life, they don’t have to wait for the fire department or a specialized unit to show up. They can literally grab this tool, open a door and preserve a life.”

Colligan, who has known Dapkins from his days as an officer in Somerset County, was struck by the JTC mantra that jumps off its logo. Under the words in big read type, “Breacher Up” is the line, “If you can’t get in, you can’t save anyone.”

In the post-Uvalde world, Colligan recognized that the mantra now is, “Get in. Don’t wait.” And that was the reason to schedule this training day that enabled the PBA to expand its education program from the classes typically held in the basement in Woodbridge using books and PowerPoints.

“It was timely,” he noted. “It’s a well-designed entry tool, a little different than the standard tools that are carried in patrol cars. It’s designed to get in quick.”

Members who attended the training learned that it doesn’t require the biggest, strongest person in the department to make it work. Compounding body weight to create leverage, it works on a principle similar to a fulcrum.

The training enabled members to see how some of their breaching techniques and approaches might ultimately be unsuccessful. And as members tested their understanding of the training by using the claw at the breach trailer, Dapkins could see lightbulbs going off for so many in attendance.

“I think we solved a lot of problems, Dapkins added. “We had a lot of people in training saying, ‘Wow, I’ve never seen that before. That really makes sense.’”

Each class concluded with giving away a Jersey Claw. One went to Salvatore Oldratt, a Mantua Township officer who is a member of Gloucester County Local 122. The other went to Joe Lampe, a member of New Jersey State Parole Officers Local 326 and an officer with the NJ Parole Fugitive Unit.

But in the wake of Uvalde and with this training day, members might see the claw come to their agencies sooner than later. The tool and the training are that significant.

“Obviously, there were a lot of people that understood it,” Dapkins shared. “It was embraced and very positive because a lot of the officers had been on calls where they arrived and couldn’t get in.” 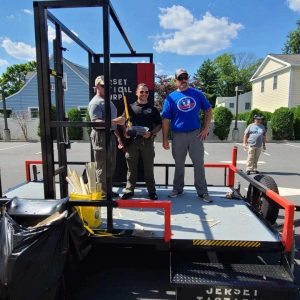 The PBA purchased two Jersey Claws to give away. Salvatore Oldratt (left photo) of Gloucester County Local 122 received one, and Joe Lampe (right photo) of New Jersey Parole Officers Local 326 received the other. 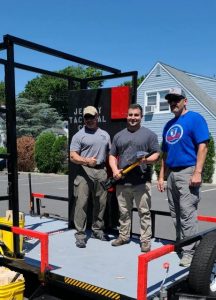