A Voice for Corrections 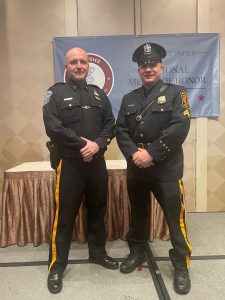 Surrounded by law enforcement officers from across the country, Passaic County Sheriff’s Local 197 State Delegate Michael Dalton felt honored to represent the NJSPBA at the One Voice United Medal of Honor and Wellness Conference May 12–14 at National Police Week in Washington, D.C.

Dalton, who was joined by Bergen County Sheriff’s Local 134 State Delegate Frank Warther, welcomed the opportunity to attend the event.

“I’ve only been delegate for three years, and I’ve been involved with our union for almost my whole career,” Dalton explained. “So for the State PBA to trust me and give me that opportunity, I really respect and appreciate that.”

One Voice United is a campaign to give correctional police officers a voice in conversations about corrections and the criminal justice system. Its annual conference featured an awards ceremony followed by a mental health seminar.

Seven correctional officers from around the country were awarded for their outstanding work in the line of duty. This year’s award recipients included officers from Oklahoma, Tennessee, North Carolina, South Carolina and New York.

Brian Dawe, national director of One Voice United, highlighted the importance of recognizing the work correctional officers do, as it often goes unnoticed.

“We do the Annual Medal of Honor Awards to recognize officers, because they go totally unrecognized by the public,” Dawe expressed. “We want to make sure that we raise the profession, that people understand the very difficult and dangerous job these men and women do every day. They are holding it down and holding it together. They deserve a lot of praise for that.”

After the awards ceremony, Dalton and Warther attended the Blue Ribbon Commission, a series of seminars in which various mental health experts and correctional officers shared their experiences on the wellness crisis facing corrections.

As Dalton listened to their accounts of challenges they have faced with PTSD and understaffing and the impact of these problems, he realized just how important it has been for the NJSPBA to focus on mental health.

“It was very eye-opening,” Dalton reflected. “And I feel like New Jersey is well ahead of the curve in the rest of the country when it comes to mental health and how proactive our New Jersey State PBA is.”

That is what Dalton hoped to take back to the PBA: the ability to reassure his members that it is OK to seek help when needed and to take advantage of those resources.

“I would say that law enforcement as a whole throughout the country is really trying to focus on mental health,” Dalton added. “They’re trying to put together more avenues and more outlets to prevent suicides and promote good mental health and give you different avenues to get help if you need it.”