Back to the Beach

Middlesex County Sheriff’s Local 165 members, who dressed up in Disney character costumes in 2020, are eager to show off their attire for this year’s Polar Bear Plunge.

Demonstrating their all-in mentality is one of the many reasons members look forward to coming back to the beach on Feb. 26. They are excited to get back to the live-and-in-person plunging they missed in 2021 due to the pandemic. Vance will join hundreds of PBA members who are looking forward to taking a leap to support Special Olympics New Jersey (SONJ), which means so much to law enforcement officers.

“I love seeing the smiles on the faces of the athletes, knowing they’re out there giving their all, doing something that’s really, truly amazing,” Vance declared. “And being able to raise money to ensure that they can compete in games and have the facilities, the tools, everything they need to actually accomplish their goals, is just great.”

Vance has been the team leader for Local 165 for seven years, and each year he sees his members plan for weeks in advance the types of costumes that will be on display. He won’t say what this year’s attire, which he describes as the best theme yet, will be, but it will again showcase the true spirit of this event.

“I have the privilege of working with officers who come together and push for this because it’s something we truly love,” Vance explained. “I don’t have to force anyone to raise money. Everyone’s all about it, and they just do it on their own for the good of the cause.”

“Some members wear tutus or superhero costumes, because on the small scale, we’re not like Spider-Man, saving the world, but when you can make a difference to one person, it’s enough to be a superhero in your own right,” Hammond explained. “So I love seeing members dress up as superheroes. Because maybe not on a grand scale, but on this scale, to give back, you are a superhero and you’ve got a beach full of them.” 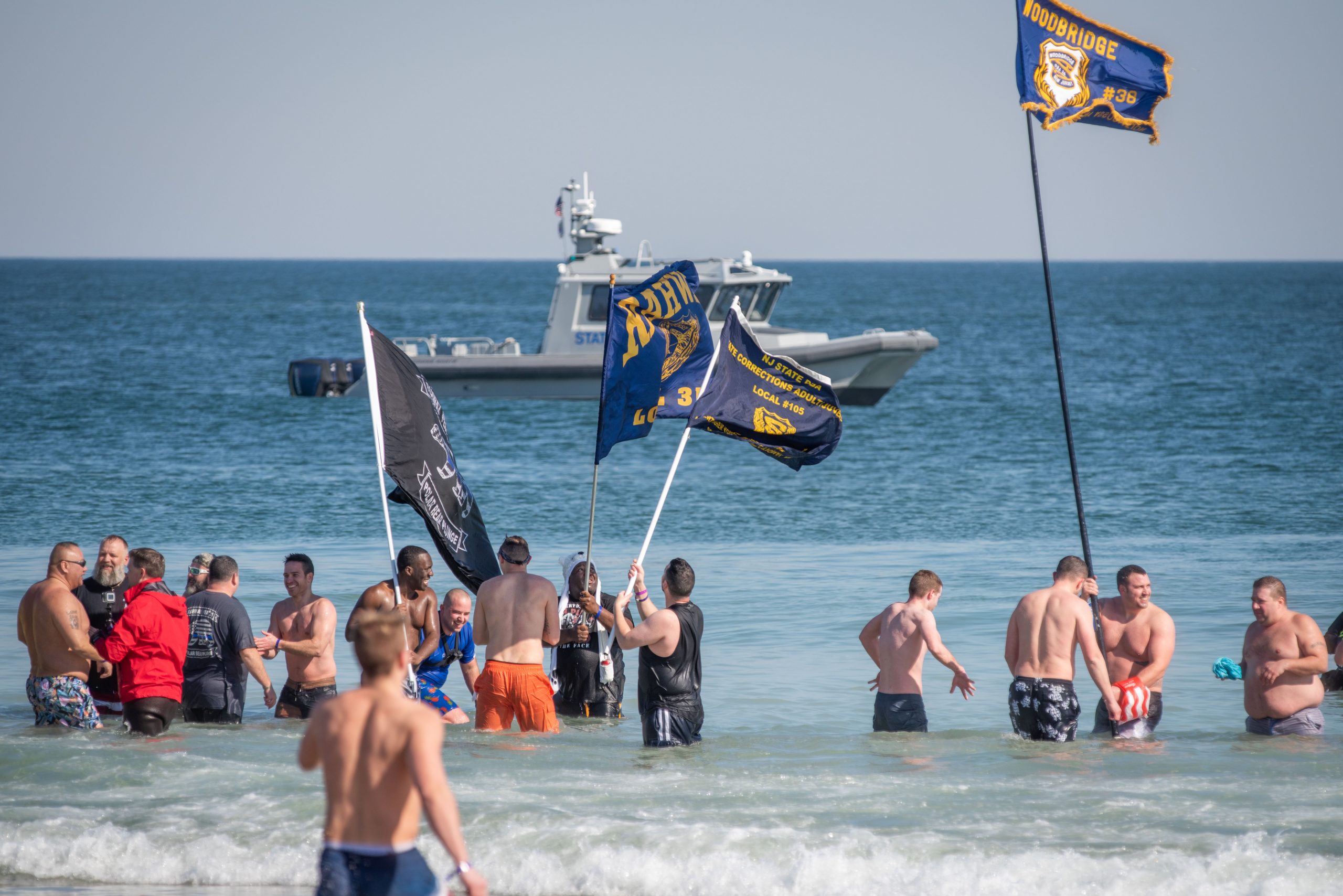 As a Special Olympics volunteer for several years, Hammond has seen firsthand the significance of the type of support law enforcement shows at the Polar Bear Plunge. And after being part of the organizing effort, Hammond is excited to see everybody come back to the beach and for that inspiring picture of community.

“It’s like cloud nine, because you know what you’re doing it for and who you’re doing it for,” Hammond related. “And to be able to see where that money goes into, that’s probably the height of it. But then everybody comes together with their dollar, or their time is an absolute blessing, because that’s what life is all about, supporting our community. Supporting who we are.”

Hammond noted how the benevolence that will compel many members to come back to Seaside Heights is a big part of the NJSPBA’s mission. The PBA annually makes a $25,000 donation for the plunge. She relayed that the PBA has donated quietly because it’s not for attention, it’s for helping somebody who has a disability have a better or easier life.

The Polar Bear Plunge, which invites members to raise funds for Special Olympics athletes and bond over their spirit of brotherhood, is a perfect reflection of the PBA’s goal to give to a deserving community.

“Seeing people recover from really hard times and give — they know that this is what life is all about. This is why we do everything that we do,” Hammond confirmed.

Support for the Special Olympics never falls short. And thousands of members will crowd the beach in February once again, a sight that never ceases to amaze Berkeley Township Local 237 State Delegate Chris Shick.

“It’s breathtaking, the amount of people that are out to support the Special Olympics in the middle of the winter to jump in the ocean. It’s speechless, there’s no words for that,” Shick explained. “If you’ve never done it before, it literally takes your breath away.”

When members of Local 237 prepare to jump in the freezing waters of the Atlantic, they are led every year to the water by Sergeant Patrick Coletti’s brother James, who was a Special Olympics athlete. And that inspires the members to participate again the following year and come back for this year.

“There’s not one person that’s ever said to me, I’m never doing this again,” Shick commented. “Everybody says, I’ll be back next year. We do it for James.” 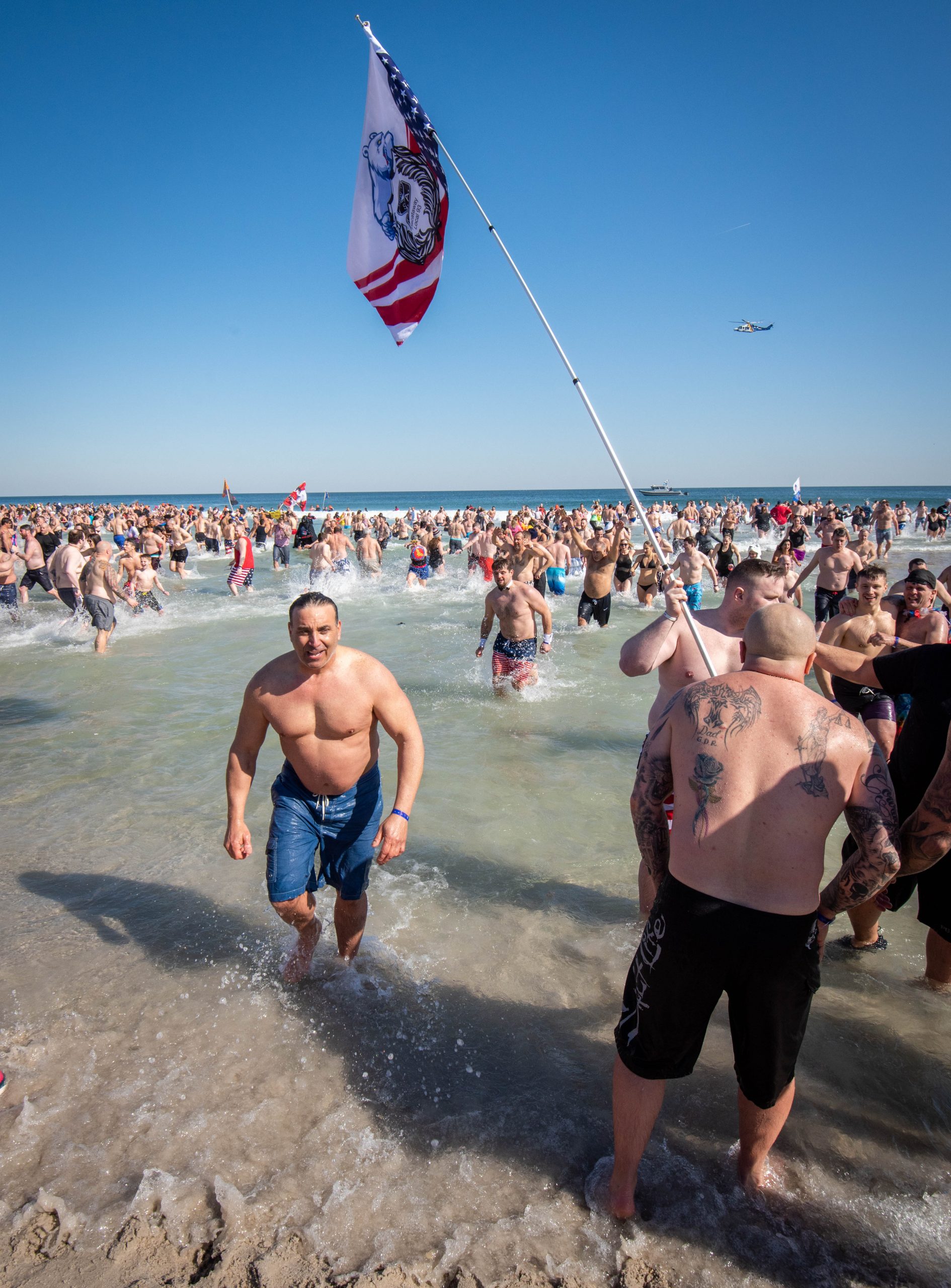 No Local brings out more members than State Corrections Local 105, which is once again inviting all state correctional police officers to join them at Sawmill restaurant at the south end of the Seaside Heights boardwalk. For them, the plunge is not only an opportunity to show support but also a time to gather with their law enforcement family.

“It’s all about the athletes,” Local 105 President Bill Sullivan declared. “But I think it’s also a chance for people to come together and have a good time and tell war stories.”

There is a lot of excitement for this year’s plunge as members prepare to head back to the beach. Members are not only looking forward to the big reveal of Local 165’s themed costumes, but also to the opportunity to support a great cause with like-minded members who will jump into a freezing ocean if that’s what it takes to help someone.

“Whether we work for our families to provide a good life or give our time and our money for a community and for athletes, that give-back in that little way is an inspiration,” Hammond expressed. “And to see it all come together, just those little bits and pieces and the smiles, and then where it goes back into, it really is fulfilling.”