Be the golf outing 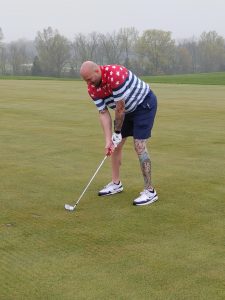 Outlined against a blue, gray May sky, a light peeked through to cast a bubble over Trump National Golf Club on May 2. Metaphorical light perhaps, but real enough so even amid the rain and relentless cloud cover, a ray of sunshine still enveloped the 144 NJSPBA members and ardent supporters of law enforcement who participated in the Survivor & Welfare Fund golf outing.

Brightness certainly beamed off the “Judge Smails” hat straight out of “Caddyshack” that Dunellen Local 146 State Delegate Joe Dudley sported for the day. Dudley brought his own version of shine to the day, complete with a gadget in his golf bag that dispensed beverages – perhaps a nod to the movie’s Rodney Dangerfield character – and regaling by reciting lines from the movie.

I don’t think the heavy stuff is gonna come down for quite some time.

No rain, no temperatures in the low 60s, no anti-law enforcement rhetoric was going to keep these players from coming out for Survivor & Welfare and the profession. The paragon of it all very well may have been Passaic County Sheriff’s Officers Local 286 member Brad Forestieri who defied the elements by playing in short sleeves and shorts.

“Under prepared for sure, but it doesn’t matter,” Forestieri confirmed. “It’s just a strength-in-numbers, unity kind of feel today. I think the biggest gift of all is to reconnect with everybody and put all our worries and cares aside for a day to raise money for a great cause and support each other.”

A day to just be the ball or perhaps generate a little something, you know, for the effort set up the bevy of shining moments. The convergence of the business community and members certainly lit up the event, even chasing away the blue-gray for all intents and purposes.

It was evident in many foursomes, including the one Dudley played with that included Somerville Local 147 State Delegate Vito Spadea and Retired Perth Amboy Local 13 State Delegate Jorge Martinez. California Casualty sponsored the group, and Martinez expounded on the benefits of such support. He saw how Survivor & Welfare saved the family of one his friends and fellow Local 13 member Thomas Raji, who was lost in 2009 to a vehicular accident.

“The benefits and the support that his family has received from the PBA is amazing,” Martinez added. “It really touches a lot of people, and it goes far. It’s awesome to see people come like Cal Casualty with this kind of support. It’s a blessing.”

The PBA golf outing is the best kind of upbeat, which leads to a little more talk about Dudley’s hat. Now, you might think, “This is the worst-looking hat I ever saw. When you buy a hat like this I bet you get a free bowl of soup.”

Looks good on him, though. 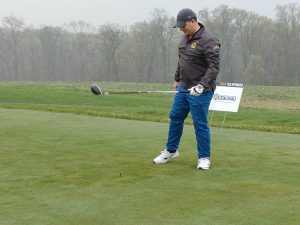 If that doesn’t tender a feel-good moment, then sentiments from sponsors like Cal Casualty rep Alina Fayerman, who played with this foursome, about what the support inspires certainly can.

“Regardless of monetary contribution, being there for the guys, having a day when they’re just relaxing and letting loose a bit is critical,” Fayerman submitted.

Traversing the Old and New courses at Trump proved to be the best way to feel the extent of the gleam surrounding the golf outing. It led to running into folks who really get what this is all about like Mercer County Sheriff Jack Kemler.

Playing in a foursome alongside Mercer County Sheriff’s Officers Local 187 State Delegate Pat Papero, Kemler, who was a Trenton officer and Local 11 member for 20 years, recognized the vitality of the union. He complimented Papero for taking the lead in putting our fires and trying to keep politics out of policing.

But take it from Sheriff Kemler about the impact of the PBA.

“There’s no words for it,” he began. “They look out for everybody. They raise funds to support family members and things in the community. That’s probably the most important thing for us as law enforcement officers. They’re so strong in supporting one another, which makes people feel so good. What they do is unbelievable and really boosts morale.”

When they keep coming back to the event, well, you know something special is happening. East Brunswick Local 145 sent a couple of foursomes to play, marking the fifth consecutive year of participating.

“In today’s climate, to have people looking out for us means the world,” Local 145 member Robert Thuring commented. “It let’s us do our job to the fullest. So we’re having a blast out here. It could be pouring rain, and we’d have fun.”

Fresh eyes on the significance of playing golf for Survivor & Welfare adds a glimmer to what transpired here. Perry Doyle, a 25-year member of Pemberton Township Local 260 who retired last year, admired how functions like this help spread the word.

“The negativity is there when you’re on the job, but when you get off the clock, the support that’s important is always there,” Doyle detailed. “It’s a shame functions like this don’t get more notoriety that they deserve.”

Joe Spezio, who served as president of Highland Park Local 64, testified as to what the golf outing gives members.

“It gives you a little bit of fortitude going out there,” he said. “[PBA President] Pat {Colligan] has done a great job of keeping everybody together. So even when people are banging heads, when it comes down to it, everybody sticks together.” 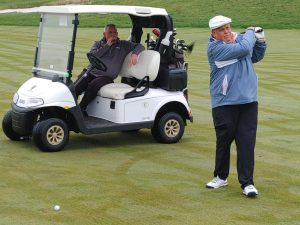 With that in mind, cannonball, cannonball coming from Freehold Township Local 209 State Delegate Sam Hernandez. He has the fortune of feeling both sides of the support. In addition to being a member, he also works for Advisors Mortgage alongside retired member and former Ocean County Chair Bob Obsuth, who is part of that elite group that offers sponsorship and support on almost a daily basis.

“It means so much to us as members because of that most critical moment we all fear,” Hernandez shared. “And I think no matter where you are from, we all have a special place for the PBA because they always have our back. And for us at Advisors, it’s special place to always be here for the Survivor & Welfare Fund.”

It’s hardly a Cinderella story the way sponsorship shows up at PBA events like this one. That elite group includes Jeff and Debbie Rosen from Lending to Heroes, who donated one of the big flat screen TVs raffled off during the post-golf reception. Jeff joined Colligan on the podium to pull the winning ticket for the TV only after he and Debbie carted off prizes for hitting the longest drives in the male and female divisions.

There are also sponsors who have been here forever like Sharon Press from Citi Mortgage, who donated a pickleball set to the raffle. Now, this wasn’t exactly the first prize selected by raffle winners. But that didn’t matter because it the thoughts that count.

And a lasting thought about the greatness of this day came from another of those elite sponsors, Joe Ablahani from Capital Benefits.

“What they give every day they’re out there on the job, we just want to give a little bit back to them,” Ablahani declared. “When you think about all the good that the Survivor & Welfare Fund does by helping every police officer, how can it not give you goosebumps.”