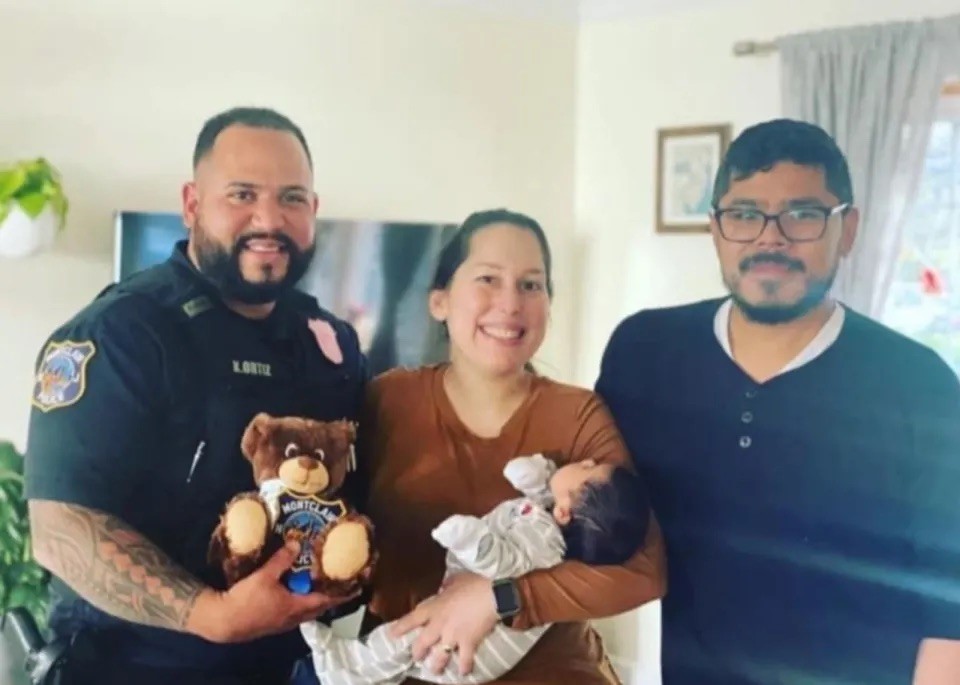 On the night before his birthday, Montclair Local 53 Alternate State Delegate Kevin Ortiz picked up an extra shift. He was patrolling on Oct. 14, 2021, at 9:45 p.m. when he heard dispatchers on the radio call out about a choking baby.

Ortiz was just four blocks away from the residence. He put the pedal to the metal and arrived at Lynette Rente and Jorkell Echeverria’s house on Nishuane Road within 30 seconds.

“It wasn’t particularly in my zone, but I happened to be in the area,” he recalled. “[The] mom was still on the phone when I walked in the house.”

Rente was holding baby Diego in her arms. When Ortiz made contact, he noticed the baby had a blue color that presumably indicated an obstructed airway. Immediately, he took the newborn and turned away from the mother.

“No parent, or anyone, wants to see us doing CPR back blows,” he explained. “And the baby was really tiny. When I say tiny, this baby was a preemie and just came home.”

The newborn was just 5 pounds. His expected birthdate hadn’t even arrived yet. Ortiz, who has been on the job since 2008, has training in performing infant CPR and gets recertified every year. He had never trained on a baby of this size. Still, he knew exactly what to do.

He tried doing back blows before turning the newborn over. Nothing.

He tried some more back blows, and the baby threw up chunks of liquid.

Once the baby started to cry, Ortiz turned him over. Then the baby’s breath started to slow down again.

“I gave a couple more back blows just to get everything out,” he remembered. “Then I asked the dad to get the oxygen out of my bag.”

Ortiz gave Echeverria instructions on how to get the oxygen together. Then, Local 53 members Sean Verbist and Matthew Dobrowolski arrived on scene to take over for the father and keep emergency personnel updated with the progress of the incident.

After receiving oxygen for 15 minutes, baby Diego went from looking blue to having a normal white-and-reddish complexion. The officers breathed a sigh of relief.

Had the newborn continued to be unresponsive, they would have brought out the AED machine to deliver shocks to the baby. Ortiz said he was praying not to have to perform the shocks, or even worse, be at a point where they ran out of options.

“On this job, you never want to be like, ‘Oh, that’s it. There’s nothing we can do,’” he admitted. “No one wants to have that call. So when it worked out, it was a big relief.”

By the time emergency personnel arrived, Diego was stable and had stopped crying. EMTs allowed the baby to be returned to his mother and transported them to a children’s hospital.

As the incident wrapped up, the clock was nearing midnight. It was Ortiz’s birthday. He declared the successful lifesaving response to be the “best birthday gift ever.” And the first person he texted was Montclair Officer Christopher Barnes, who teaches the CPR training for officers, to thank him for giving him the amazing instruction that helped to save a life.

Several weeks later, Ortiz noticed a new batch of teddy bears, or “feel better” bears, at the department. He grabbed a bear and a Montclair Police Department patch for baby Diego.

“I figured I’d drive by, see if they’re home and maybe leave it on the mailbox,” he shared. “But as I walked up to the door, they saw me park outside the window.”

When Ortiz entered the home and saw Diego, his jaw dropped. The baby had grown to nearly twice the size from the last visit.

“He was a lot bigger, more regular baby size now,” Ortiz clarified. “He was maybe 9, 10 pounds at this point.”

Seeing the baby’s progress made Ortiz reflect on the incident from weeks past. Despite never having responded to this kind of call, he said it was successful due both to his training and being able to lean on his colleagues.

“It was one of those perfect calls where everything just fell into place,” Ortiz proclaimed. “An unplanned event but went as planned.”