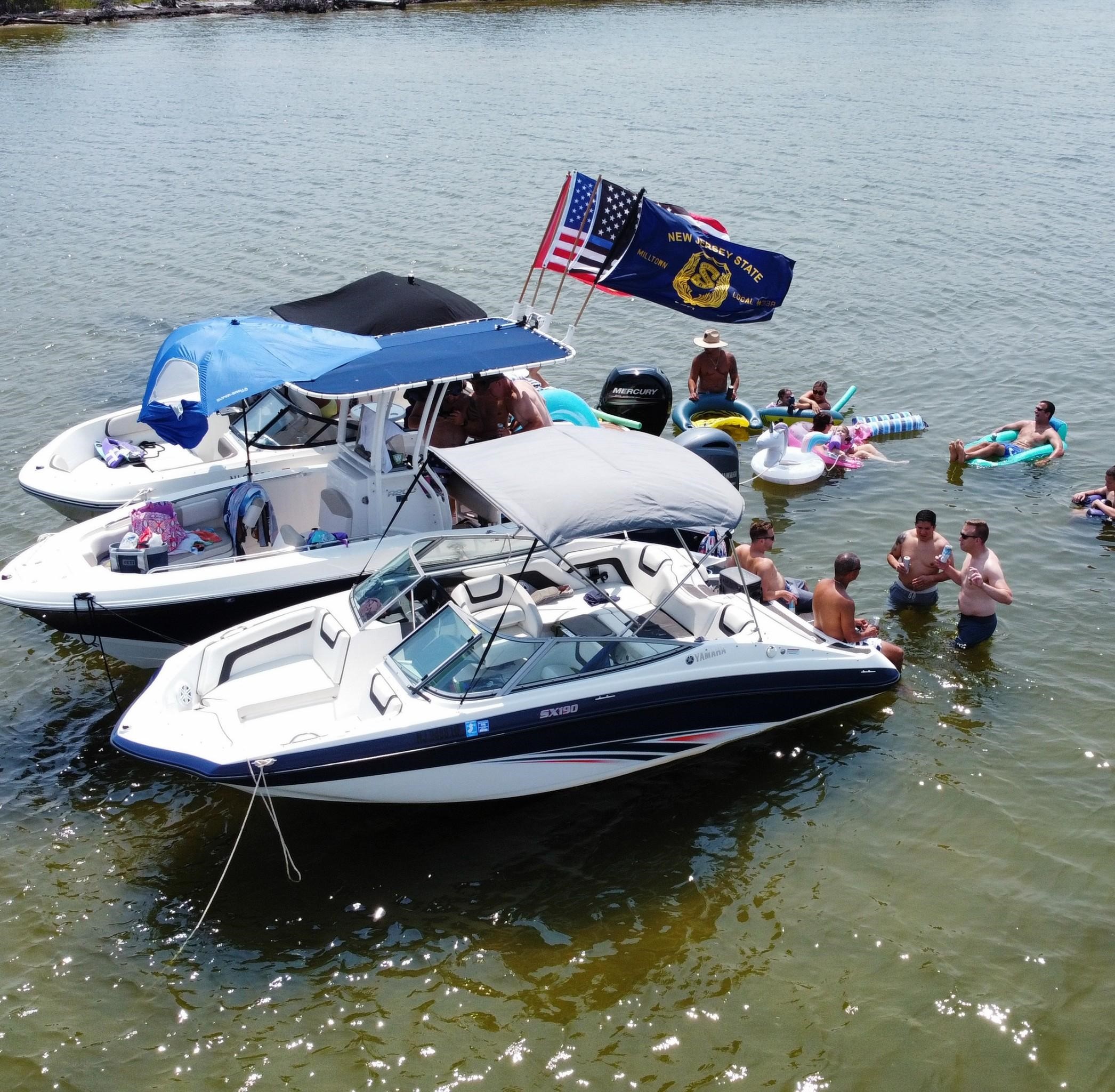 The event inspired Locals to come by boat to the Shoal, and 115 of them came this year. Yes, 115. Boat rental places from Point Pleasant Beach to LBI were sold out well in advance. They formed a perimeter of what could have been the largest wading pool ever convened on the Jersey Shore.

PBA Local flags and banners flapped in the wind under a sky so perfect that it confirmed God must wear blue. Sure there were some over-the-top fashion statements in the form of American and blue-line flag hats, blue-line flag bikinis and some shirtless members who didn’t give a spit that they don’t have beach bodies.

But relaxation and stress relief ran so rampant that you could almost see it waft up from the water and disappear into the horizon. It seemed to evoke a soundtrack the Zac Brown band must have pictured when writing “Paradise…”

Wishing I was knee deep in the water somewhere

Got the blue sky breeze and it don’t seem fair

Sunrise there’s a fire in the sky

Never been so happy

This was paradise, even if only for a day that could not have been more medicinal for PBA members. As Wayne Local 136 member Evelyn Tam rejoiced when she ran into a group of members she had not seen since graduating from the academy two years ago, the essence of PBA Day at Tices Shoal was doing everything it was intended to do.

“It’s the camaraderie that you build at the academy and becomes a habit is here,” Tam declared. “I love it. You cool off, you enjoy the sun and you’re ready to come back to work. I go back Friday night, so I’m amped up to do the job.”

Nutley Local 33 State Delegate PJ Sandomenico, who spearheads PBA Day at Tices Shoal alongside Manchester Township Local 246 State Delegate Artie Cronk, did not expect the turnout that has tripled in three years. But he was buzzing on seeing members feel the stress relief he feels nearly every weekend aboard his boat “Shoal Dancer.”

“The intention was for members to get out there, decompress a little bit and not have to worry about work,” Sandomenico confirmed. “Now, you definitely need more than a one-day leave from work. But I think one day of going out, letting loose and just enjoying yourself: You can’t put a price tag on that.” 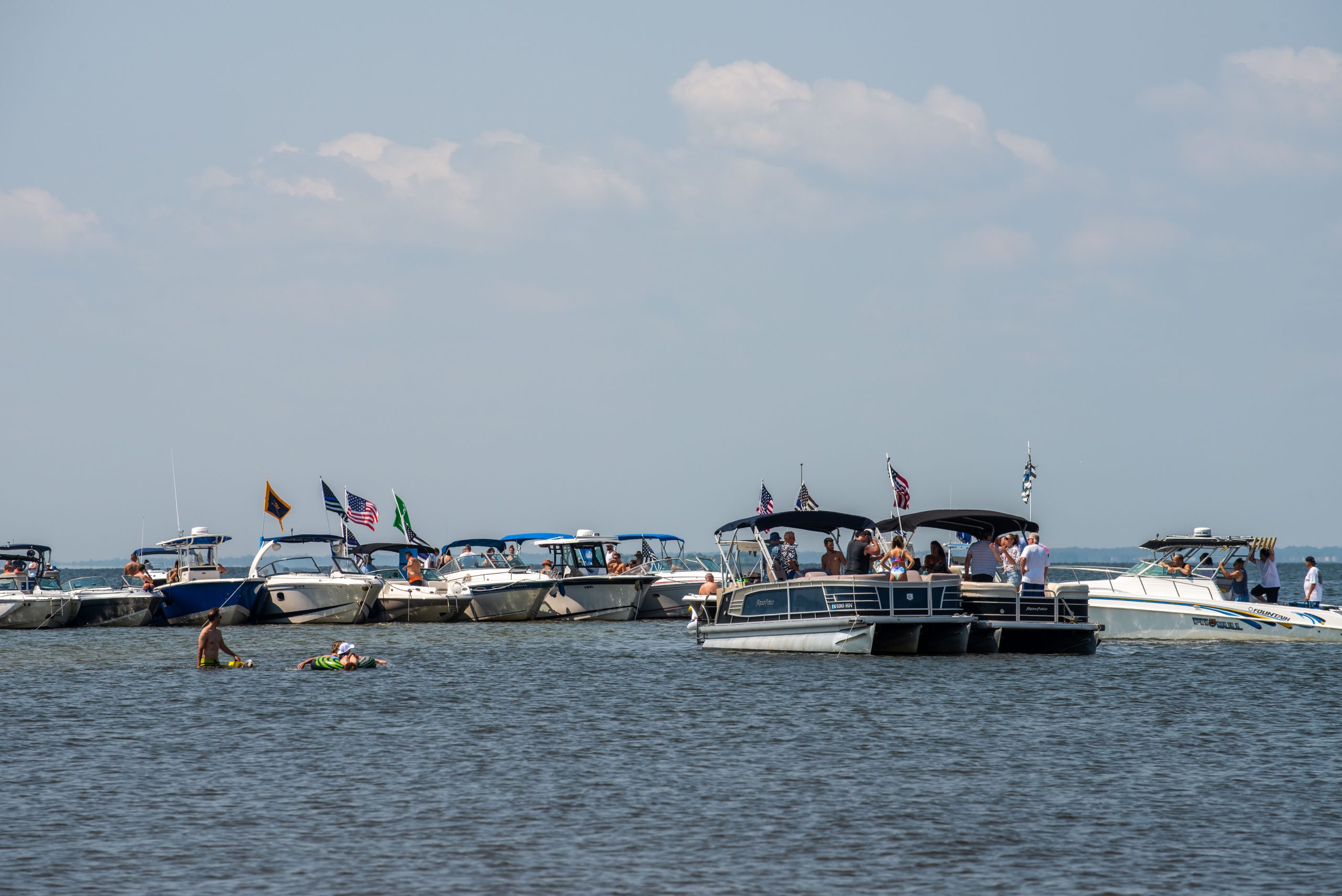 As the song defines it, paradise begins with…

Gonna put the world away for a minute.

Pretend I don’t live in it.

Sunshine gonna wash my blues away.

When NJSPA President Pat Colligan asked Sandomenico three years ago if something like this could be done, there was no telling how much of an armada members would forge. Turns out, the PBA has some serious crews like the Costello family from Hoboken.

Mike Sr., a retired Hoboken Local 2 member who served 28 years, motored a couple of dozen Local 2 members, family members and friends to the event on his rig and an accompanying vessel. His daughter, Sergeant Jill Costello, and son, Lieutenant Mike Costello, both Local 2 SOA members, organized the voyage and even compelled a local establishment to sponsor provisions and giveaways. 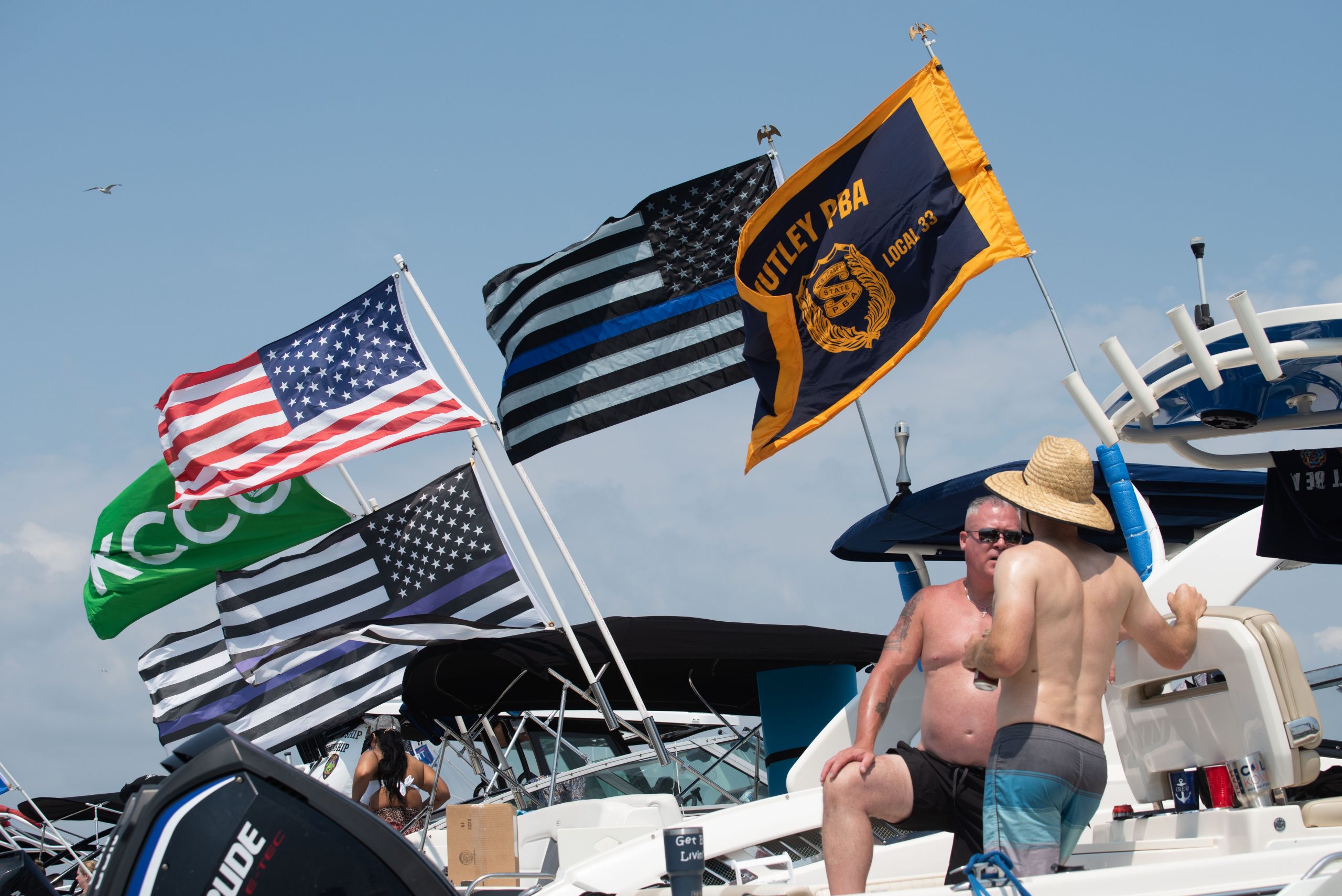 All they needed was an excuse from the PBA to get out on the water and get away from it all. The union’s brainstorm for such a fleet-and-greet remedied so much of what has been ailing members before, during and hopefully coming out of the pandemic.

“We live and work in Hoboken, a one-square-mile, densely populated area with thousands of calls for service each year,” Mike Jr. related. “We’re very, very busy and we just need a little break every now and then. This is the perfect spot.”

Breaking good came from the top down, judging by the red, white and blue fishing hat Colligan sported. The brim had red and white stripes like the American flag. The rest was blue with fish icons where the stars would be.

Pursuit of their own kind of paradise led nearly a dozen members of the Bergen County Conference to rent a couple of boats and Shoal out. They shoved off from LBI and made a 40-minute trek to get some of what the PBA wanted to offer on this day.

“Taking care of members,” submitted Kevin Van Dyk, the Midland Park Local 79 State Delegate who was part of that Bergen crew. “That’s what it’s all about, isn’t it?”

Paterson Local 1 had planned to bring similar numbers in what SOA President Mason Maher called a bargain basement Bentley of a boat the Local had rented. But when the department caught a homicide the night before, several of those scheduled to come had to cancel.

Maher knew what they were missing.

“It’s a stress reliever because we’re around our brothers in blue who have the same experiences we have,” he explained. “It’s a relaxing day not thinking about the pressures inside the department, a day for us to unwind and enjoy with people asking us questions. Everybody is always asking us questions.”

Franklin Township Local 154 State Delegate Mark Keller had no problem realizing how rewarding a day of unwinding could be. That’s why he led a group from his Local to Tices for the second straight year.

He did have a problem with letting his hard down, but only because he doesn’t have any hair. Leaning on the props of choice for the day – a cigar and a cold beverage – Keller considered the residual value of being knee deep in the water.

“To what do you call it? Regroup,” he acknowledged. “To regroup and then go back with a little to help these guys get back on the streets.” 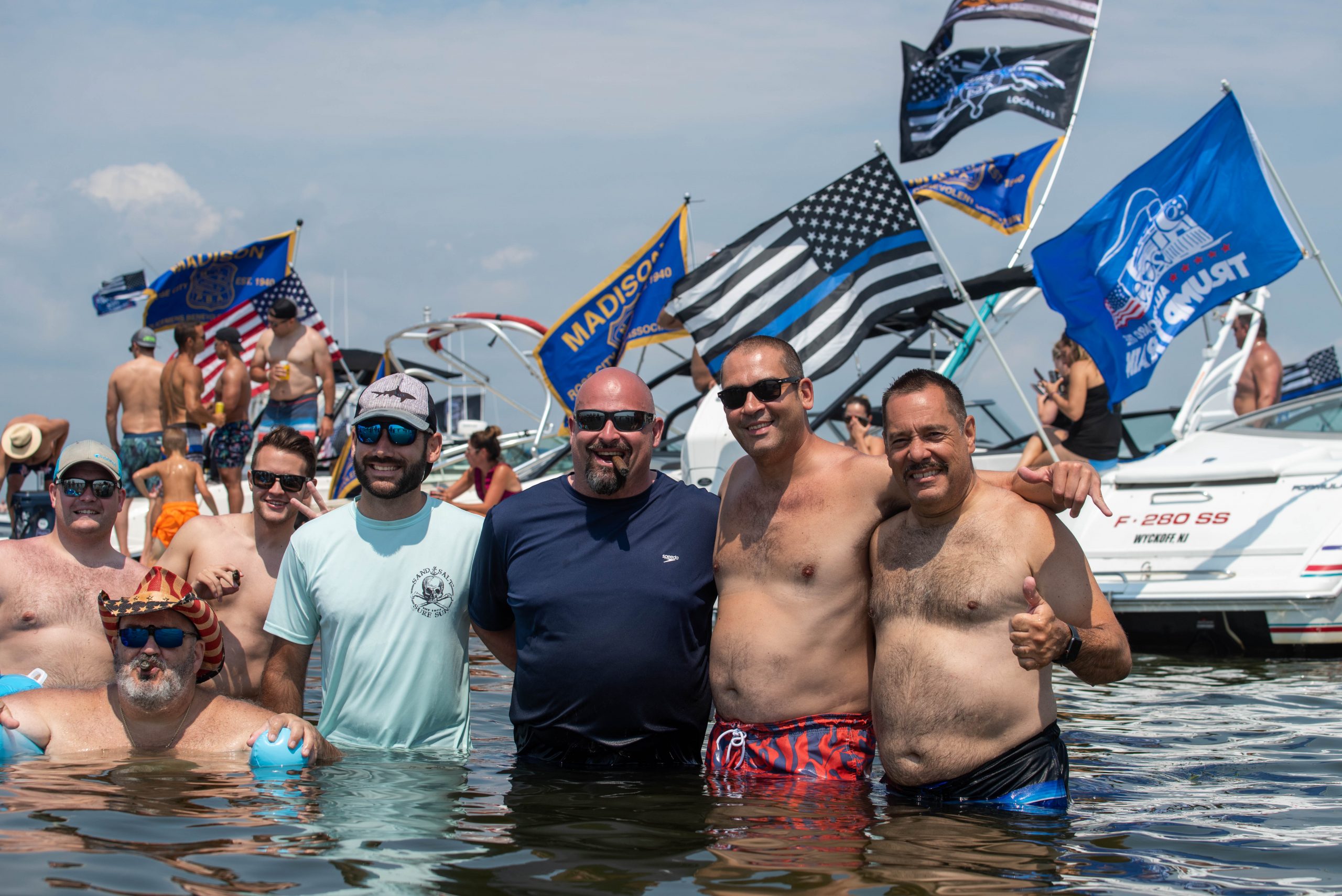 Catching a break or taking a break might be one of the greatest challenges everything law enforcement officer faces. Dr. Michael Bizzarro, the director of clinical services for the first responder treatment team at Penn Medicine Princeton House, acknowledges that because of their constant state of anticipatory anxiety and chronic hyper vigilance, “Taking a break is something that they don’t even know how to do.” 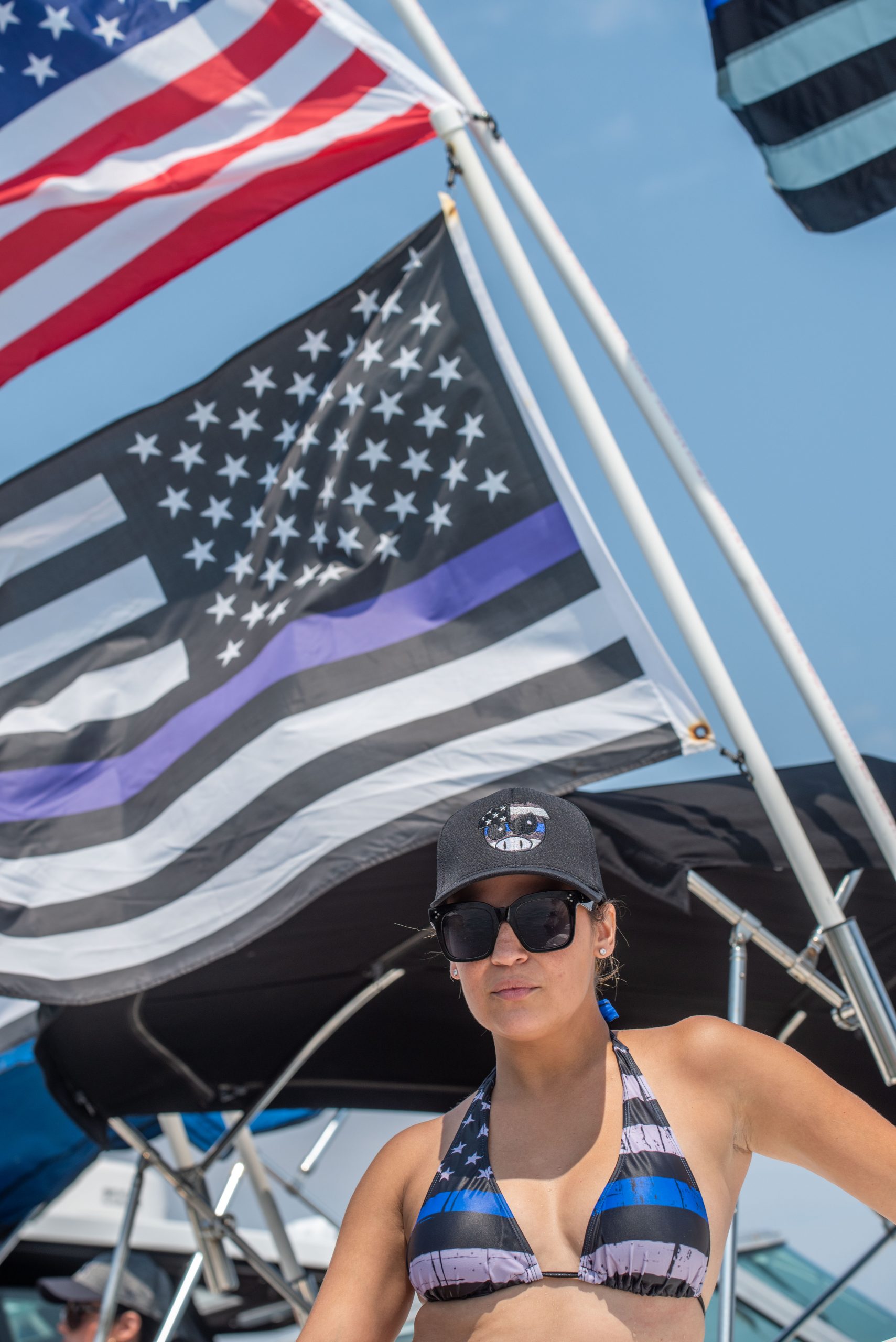 As a former law enforcement officer, Dr. B knows officers worry that if they turn off that emotion it will be hard to flip the switch back on. That creates the rock-and-hard-place existence of not finding time during the course of day to center yourself and having to use the car ride home from work to build a bridge back to your family.

“And if you can’t effectively make that transition, everything your family does is going to get on your nerves and you’re going to turn into somebody they’re really not going to like,” he added.

Some officers realize that exercising for 30 minutes or more can generate the clarity of mind to endure the day. Others wind up believing the only way to catch a break from a day’s work is to hit the bar or the bottle when it’s over.

Perhaps there’s a choice between break or breakdown. Dr. B submits his “check engine light” theory to illuminate this conundrum. Some will see the check engine light come on in the car, pull over, check the manual and call the dealer. Some will dismiss it until a warning light comes on. Then another and another.

“The next thing you know, the car breaks down,” Dr. B asserted. “Well, how many times do we get warnings and dismiss them, and we don’t pay attention to them.”

But a feeling of engine tune-up seemed to ripple through the Tices Shoal waters. And it emphasized what members need to do to catch a break,

“I think where it really starts is believing that you deserve good things to be in your life,” Dr. B accentuated. “For many of us, that is often contingent on external sources instead of coming from within. I often say it’s an inside job because it is. It takes a lot of work and daily commitment.”

Those are the breaks

PBA Day at Tices Shoal showed how easy it can be to unplug for the day. It’s almost as if Zac Brown knew what the PBA had in mind with the lyrics from “Paradise” communicated….

Wrote a note said be back in a minute

Bought a boat and I sailed off in it

Mind on a permanent vacation

The ocean is my only medication

Wishing my condition ain’t ever gonna go away 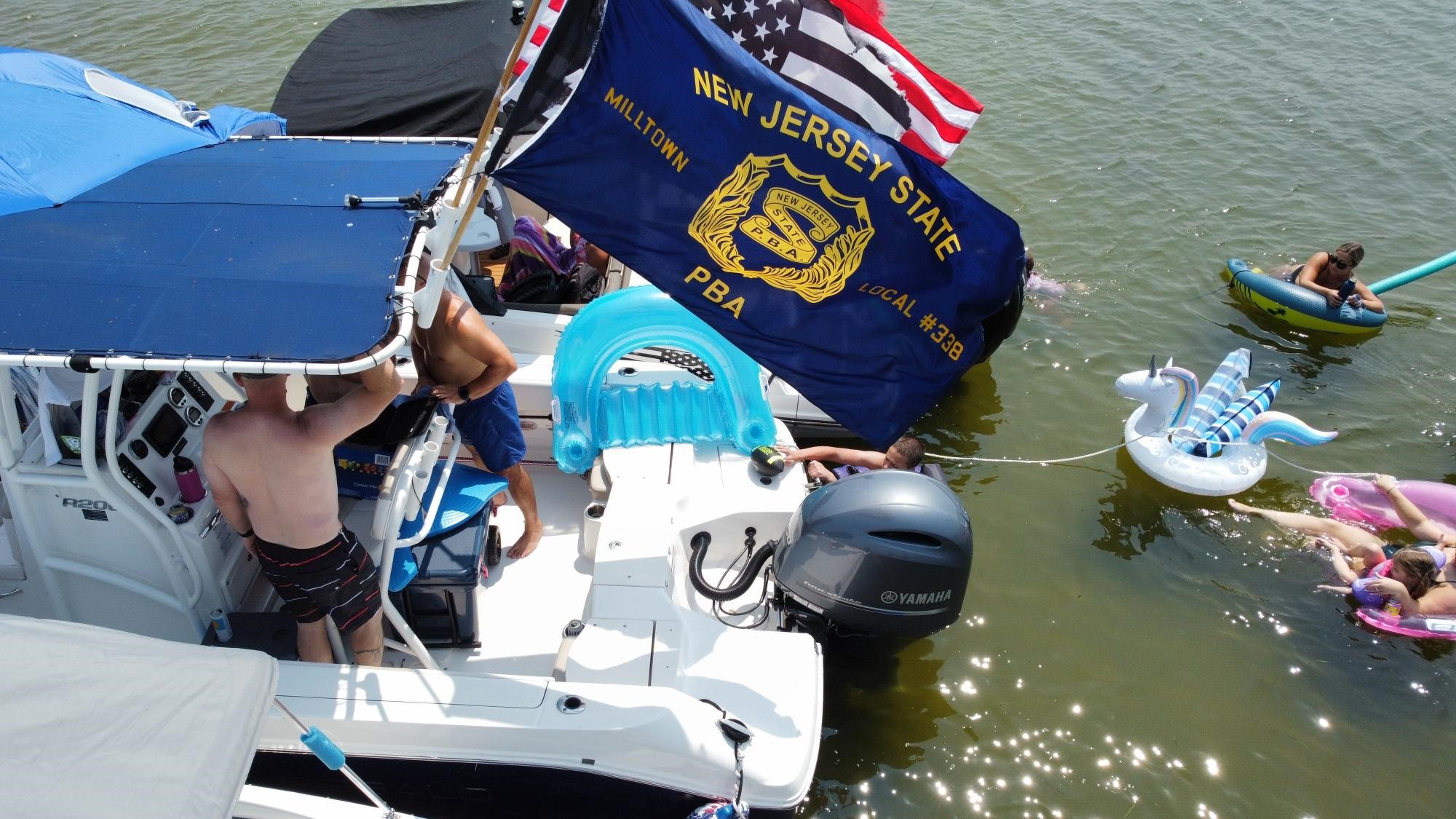 Madison Boro Local 92 member Jim Cavezza exhibited these words by bringing a group that revealed how to lean on your family for break time. Several Local 92 members came on the Yamaha 242 he bought In October. And he also brought his wife Meredith and three sons, Dante, Nicolas and Matteo, who set up a slip-and-slide on the water.

Clearly, this day offered the kind of break that made PBA members feel like they can walk on water. Or float off into a relaxation that is sometimes hard to find. Oakland Local 164 member Mike Piercy was on the verge of reaching that breaking good point a couple of hours after dropping anchor.

“Not yet, but soon,” he reported. “If I was decompressed, I’d be right here in this tube asleep.”

If there’s any question about how much paradise is in these waters, consider the perspective from Fort Lee Local 245 State Delegate Rich Rochford. For the third consecutive time, he invited members from his Local to his shore house, took them to dinner the night before and came over on his Monterey M45.

As an avid boater, he knows the medicinal value of being on the ocean. 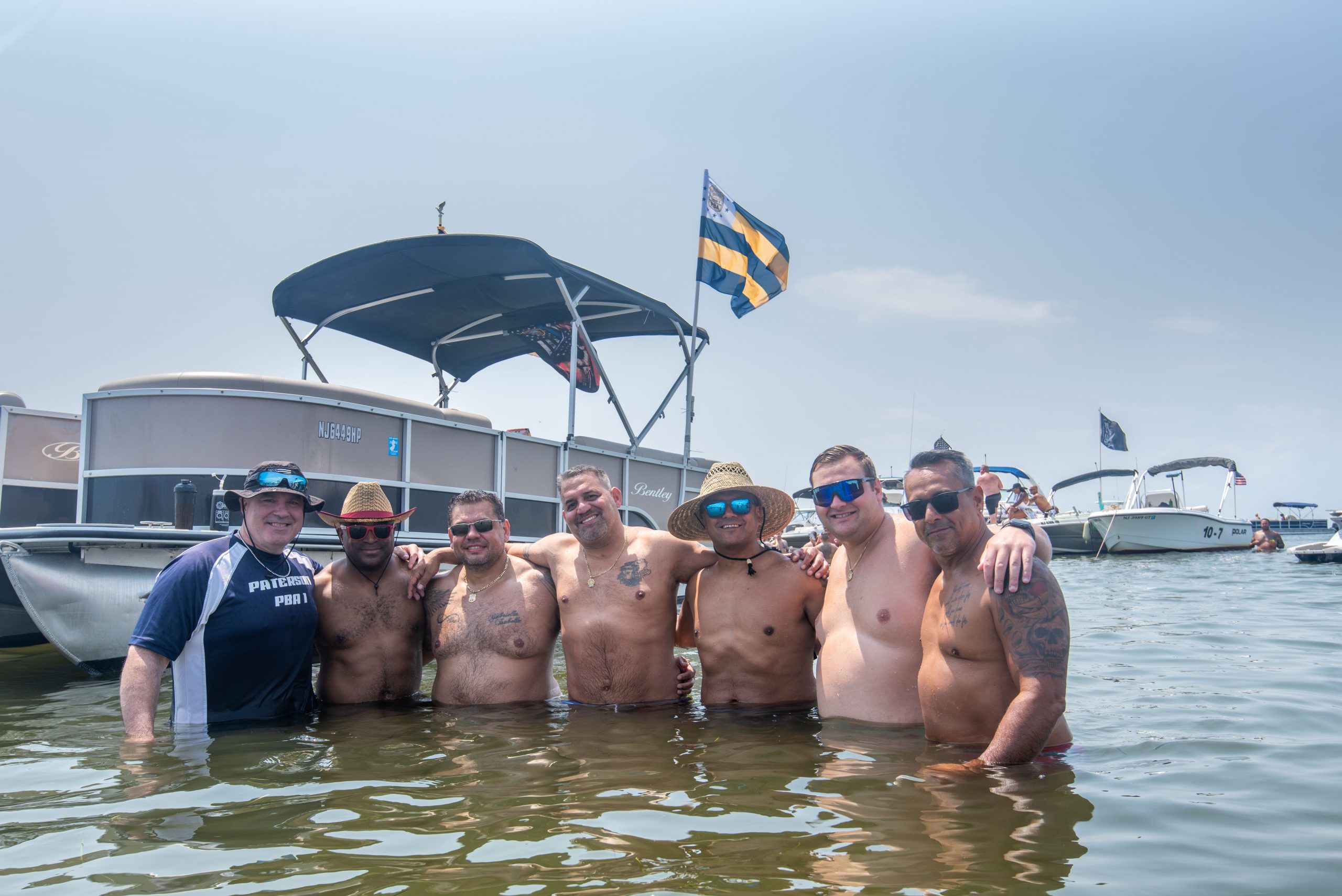 “It’s therapeutic,” he explained. “Just being in the open water, not listening to your cell phone and not worrying about work. It’s nice to get away not only from your problems, but others people’s problems and just relax.”

For some third-party testimony about how much this break helped, listen to what attorney Lori Dvorak observed as she hung in the water with the members she serves through the PBA’s Legal Protection Plan.

“This is worthy more than 20 days off,” she stated. “It’s no pressure, no stress, and you need these moments to get your balance back.”

Sandomenico didn’t realize just how much relaxation and stress relief had been achieved until days after the event. From a drone photo he had taken, they were able to count the 115 boats mustered at Tices Shoal. He saw how far many of these members traveled to take part; some coming from as far away as Sussex County, he said.

He added that he has already received text messages asking when next year’s event will be held. Members have expressed wanted to get their boat rentals set as soon as possible so they can experience another unprecedented mental health day.

“When all the boats are connected with one another, the music is going, the drinks are flowing and members are BS-ing, it’s really a relaxing day,” he concluded. “To me, that is more than I can ever ask for.”

Or as the song tells…

When you lose yourself

You find the key to paradise