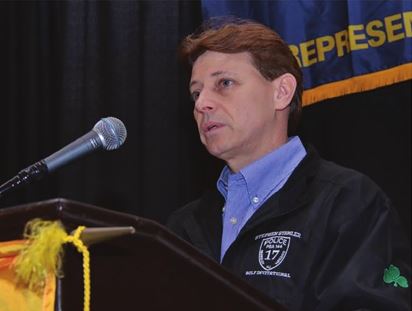 Berkeley Heights Local 144 State Delegate Pat Moran was on the verge of calling it a day. A very long day.

After completing an overtime assignment on July 23, Moran checked in with the sergeant at 5 p.m. and was about to head south to get home.

While he was en route, Moran heard a call on the radio about a person with an obstructed airway, not breathing. Figuring he was the closest to the location of the call, he decided to work over-overtime.

“The call was on the east side of town,” Moran described. “I knew we were a little busy, and the calls were popping off, and I was at the right place at the right time.”

Moran, wearing only the bottom half of his uniform and a black T-shirt, arrived at the residence on Webster Drive to find a father holding a baby who was unresponsive.

“It was like grabbing a doll,” Moran recalled. “I didn’t hear the word ‘baby’ [on the radio], so you’re thinking, ‘All right, let’s just get there.’ When somebody’s saying ‘fully obstructed airway,’ it just changes. It’s like either they’re turning blue, or this is going to go south quick.”

The father handed the 25-day-old infant to Moran, who had never responded to a call regarding an infant before. Never mind it being his first, he handled it like a pro.

“You have to take the baby and flip it over,” Moran explained. “So you support its head with your hands and then the body is resting on your forearm. Then you just start giving it back blows to dislodge [the blockage].”

Finally, the blockage was dislodged, and the baby started to cry. The parents were relieved but also still in shock, and Moran calmed them down.

“Everybody’s adrenaline was done,” Moran mentioned. “Mom’s busting out crying and falling to the floor and dad doesn’t know what to do. He’s standing there. So I’m like, ‘Go to your wife,’ and then I got everybody inside.”

Moran pulled out two kitchen chairs for the parents to sit on while he held the baby until the rescue squad arrived on scene. When emergency medical services arrived, they determined the infant was in a stable enough condition for the family to stay at home and monitor the situation overnight.

Moran credits his instinctive actions in rescuing the infant to the years of training and experience he’s had on the job.

“It’s a combination of everything,” Moran clarified. “Training from the rescue squad every year and a CPR update. Then I just think that your training over time and your instincts all come together for you.”

All the training in the world wouldn’t have mattered had the timing not worked out. Moran is grateful that the timing worked in everyone’s favor and did not lead to a life-threatening situation.

“The parents’ worst nightmare is a baby not breathing or even choking,” Moran noted. “This could have easily gone the other way, where it’s like, ‘No, sorry, we didn’t get here on time,’ or something like that. And then that’s all they remember about the police department.”

Moran knows that he could have followed his route home instead of responding to the call, especially after already working overtime. But on duty or not, he is always going to respond to a call to serve his community.

“It made a difference to a family, a neighborhood and my team,” Moran relayed. “Earlier in the week, we had someone take their own life and couldn’t change that outcome, but to close out the shift on a positive makes all the difference.”