Brotherhood of the Victorious Pants 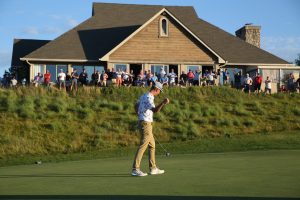 As members watch from the ‘heckle terrace,” Washington Township Local 318 member Joe Russo celebrates making the putt that gave him and Kevin Convery the championship in the 2022 Law Enforcement Open.

When Washington Township Local 318 member Joe Russo picked up his partner for the day, Sergeant Kevin Convery, at 8 a.m. on July 6, they had no idea about the majestic adventure ahead known as the Law Enforcement Open. The 137-mile trek to Ballyowen Golf Club in Hamburg that required two and half hours of drive time culminated with Russo standing before a ball-busting gallery of NJSPBA members and other law enforcement officers from the tri-state area.

Having blistered his drive on the vaunted playoff hole of this unmatched tournament, Russo had to face commentary from the other players filling the balcony overlooking the 18th green, the perch heretofore known as the “heckle terrace.” This perspective has helped the Open achieve a great identity, a place from which the most creative – and not always fit to print – observations turn up the heat on the four two-player teams that have endured the countless miles and 18 holes on one of the toughest tracks in the state to qualify for.

Prior to the playoff, Harry Phillips, executive director of the Police Unity Tour that is one of the event’s benefactors, offered some words of praise and thanks to Chirrs Mulvihill, the director of marketing at Crystal Springs Resort who created this adventure. Then he gave the order to those packing the terrace to capacity.

“Let’s get ready to heckle.”

As the only player not wearing shorts on a typically humid day in Jersey’s foothills, the gallery put it to Russo, who even with three years on the job still could pass for a college kid.

“Hey, pants,” one onlooker chirped. “Where do you dispatch?”

“Pants” became the term of endearment for Russo, who was unshaken standing over the six-foot birdie putt that, if he dropped it, would make him and Convery the victors in the fifth annual Law Enforcement Open. This moment accentuated just how far the 100-plus officers would go just to be part of this event and maybe have a chance to win free golf for their department at Crystal Springs array of courses for a year. 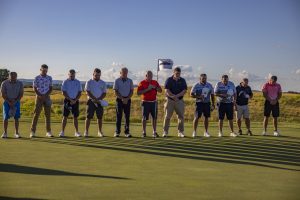 From the way the Port Authority Pipes and Drums belted out accompaniment that would have played even at St. Andrews (the one in Scotland) to the presence of special guest star Kelsey Grammer (the guy who played “Frazier”) to a day of competition and relaxation cops rarely, if ever, get to enjoy, the Law Enforcement Open extended its rep as a tradition unlike any other. In fact, this year’s Open even elevated the magnificence of the battle to be the champion law enforcement golfers of the year.

“When he picked me up this morning, I knew it was going to be worth the trip,” Convery confirmed.

Ultimately, his statement had less to do with the outcome and more about the opportunity to participate in this one-of-a-kind event. First and foremost is the day of camaraderie and bonding built on trading barbs and getting away from the job that comes with playing the Open.

Then, there is landscape of Ballyowen’s breathtaking mountain scenery to augment the competitive drive between law enforcement officers that elevates the barbs to flat-out trash talking. Top that off with this year’s special twist: a toast from Grammar that offered officers so much of what they thirst for, and you have a day unlike any other for cops.

“The way I’m playing I wish I was back at work, but we need more stuff like this,” declared Fair Lawn Local 67 member Jim Krizek, who participated for the first time. “I think events like this are great because you can get it out of your system in a healthy way.”

The Open brings members together in ways that are otherwise not available. Consider the pairing of Dover Local 107 member Chris Irons – perhaps the player in the field with the most applicable last name for golf – and New Jersey State Conservation Officers Local 120 member Jordan Holmes. They met in the academy 15 years ago and took up the game after coming on the job. 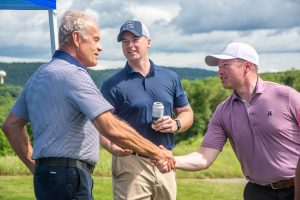 So the Open was all about getting together. A little reunion if you will.

“Chris called me and said, ‘Dude, let’s get out and do this,’” Holmes reported.

“That’s the plan,” added Irons, who works for the Mendham Boro PD. “Just being together as often as we can.”

Nobody described the essence of the Open quite like Monmouth County Sheriff’s Officers Local 314 member Kurt Kroeper. His game is strong enough to compete in some amateur tournaments, and Kroeper returned to the Open for the second time determined to make the four-team playoff.

But not just for the thrill of victory.

“The playoff is something to be experienced because you have 130 cops more or less heckling,” explained Kroeper, who has been on for 27 years. “But it’s been two years of craziness on the street, so us talking to each other like that is no big deal. It’s just a lot of camaraderie and a lot of brotherhood.”

And he also had a take about how players should assess the drama of the competition.

“If you’re not on the PGA Tour, you’re not good enough to get mad,” Kroeper quipped.

Aberdeen Township Local 163 member Manny Carabel characterized the competitive edge players wanted to bring to the Open. He noted how, from day one, officers want to be the first to make a certain collar, make their first motor vehicle stop, get the most arrests.

Or run the fastest mile in the academy?

“Well that wasn’t me, but I think it carries over to the golf course,” clarified Carabel, who retired in 2018 after 26 years on and played the Open for the third time. “Really, though, it’s just nice to shoot the breeze and have some fun. We’re all in law enforcement and the way the world is today, to be out on the golf course, whether we play good or bad, it’s still a fun day.” 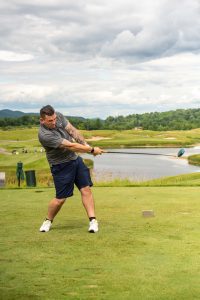 The Law Enforcement Open once again enable NJSPBA members from across the state to challenge each other on the golf course and enjoy an unmatched day away from the job.

The added twist for this year’s Open was the guest appearance by Grammer. There couldn’t have been a better way to top it off than the famed television and Broadway star joining his friend, Mulvihill, and bringing many samples of the brand of beer he is now brewing to share.

From a farm he owns in upstate New York, Grammer has created Faith American beer. With the style and wit his fans know so well, Grammer described this new product.

“It’s all beer that tastes like beer,” he deadpanned.

In addressing the troops before the playoff started and speaking off and on while greeting players as they stopped on their way to the 13th tee, Grammer submitted his unique toast.

“You lead a life that most of us would not have the balls to do. And I just have to say we are grateful,” Grammer started. “Look, I’ve been pulled over a few times, and I really love it when you guys let me go. Seriously, though, we were just talking about it. Actors, we have hazardous lives. You can get hurt on a set. You do stunts and all kinds of nonsense. But we don’t have to run into danger. We pretend. Theirs is real. I really admire them for that.”

The final best line of the day came from a source who asked to remain anonymous. As he noted the tough conditions of Ballyowen and what was showing up on his scorecard and others he saw, he joked, “The winning twosome will be Brady/Giglio cops.”

And now back to Pants.

The Local 318 duo representing faced a bit of a battle in the playoff. Port Authority Local 116 members Joe Della Sera and Geoff Jeppson, who won the 2019 Open, qualified. Bergen County Sheriff’s Department Local 134 members Robert Del Corpo and Jeff Hillberts, who won the 2021 title, also qualified. As did NYPD Officers Jay Barry and Lou Cardenas, who were one of the six teams entered representing the NYPD Golf League.

Showing his leadership as the sergeant, Convery issued a standing order to Russo, who played college golf at Wilmington University.

“I pretty much told him to make a lot of putts,” Convery said.

His toughest was about to come. Not because of the distance, but because of the heckling that picked up after Russo blasted his drive on the playoff hole down the middle of the fairway.

“You can’t get enough of that,” Russo responded. “That’s the way golf is meant to be. It was more about having fun out here anyway. We both had a great time.”

Three players in the playoff had birdie putts. Cardenas was away and missed. Del Corpo had the line on his putt, but it missed left by a sliver.

Then Russo stepped up. And, after hitching up those pants just a tad, there was never a doubt.

“I knew he was going to make it,” Convery shared. “I was just waiting for it to fall.”

When the cheering stopped and the party ended, Russo and Convery set out on the drive south. They won the honor of letting their Local members know that free golf was now available for the next year.

Think two-plus hours is a long way to go to play golf?

“It’s definitely worth it coming up here,” Convery confirmed.