For PBA members, the connection between law enforcement and youth has looked like two button eyes and a fuzzy, hand-sewn nose.

The NJSPBA has become part of the “Feel Better Bears” initiative in a partnership with New Jersey 101.5. More than 7,000 teddy bears have been distributed by PBA members to children in crisis situations statewide since December 2020. 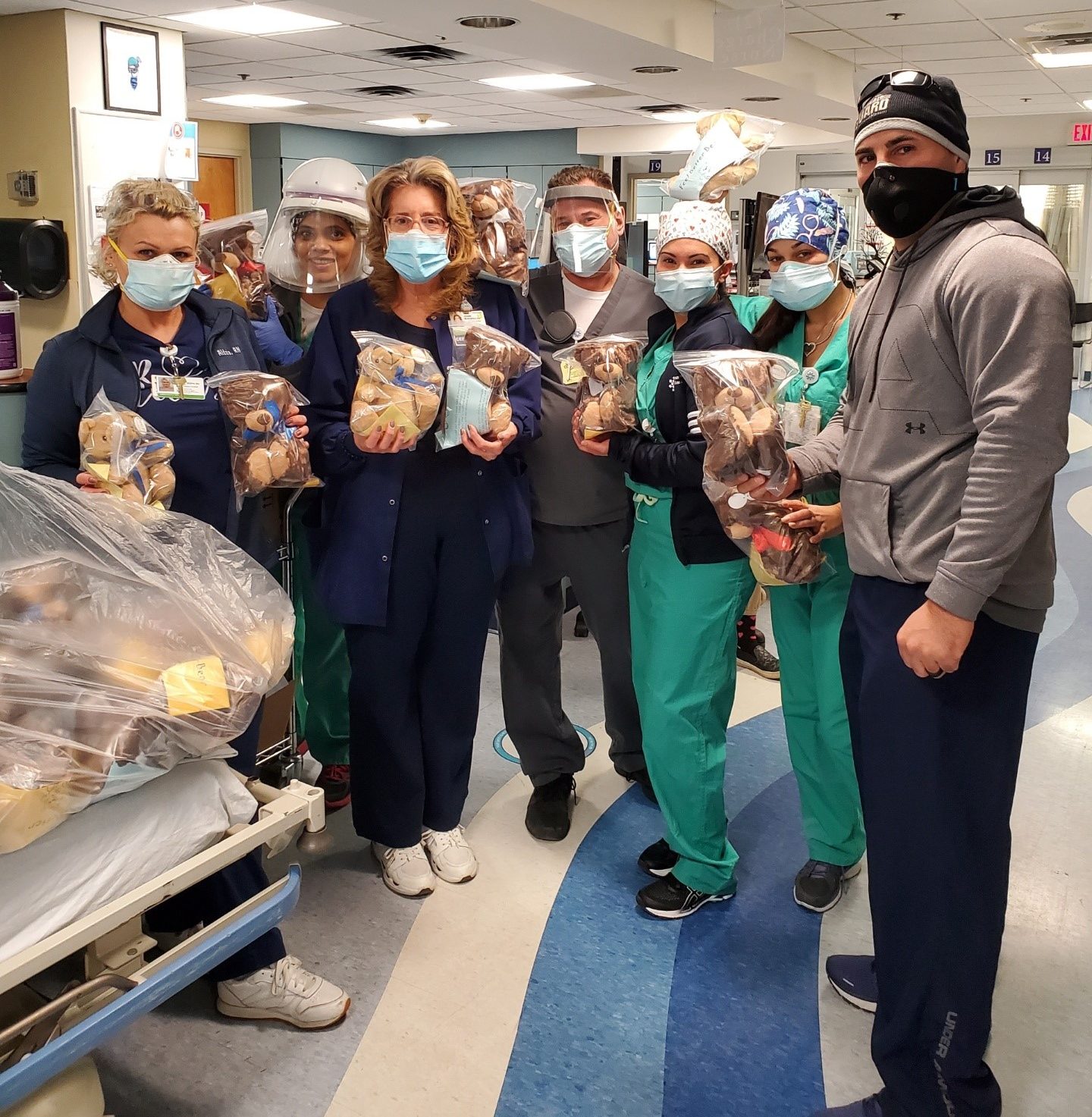 The collection of teddy bears was first started in December 2019 by staff members at New Jersey 101.5. They reached out to the NJSPBA and set up an Amazon link where community members could buy a bear to ship to the PBA office. NJSPBA President Pat Colligan remembers state delegates coming to the state PBA office and leaving with bags of bears shoved into their hands.

The intention is for officers to pack their patrol vehicle trunks with the bears to distribute to children they encounter during traumatic responses. Each high-quality bear they leave with is packaged in a heavy-duty plastic Ziploc bag with a slip of paper explaining the purpose of the initiative.

“I’ve been on a bunch of calls in my career where I wish I had one, especially in domestics and squad calls and accidents,” Colligan divulged. “I think it’s a great tool, especially for kids who may not be brought up thinking much of law enforcement or those of us in uniform. I think it’s a really great opportunity that’s something that I don’t think a kid’s going to forget. There’s things in my very, very young life that I don’t forget — I think that would be one of them.”

After the success of New Jersey 101.5’s handing over their haul to the state PBA to distribute throughout the 2019 holiday season, the station decided to reprise the initiative for the 2020 holidays.

Perth Amboy Local 13 State Delegate Danny Gonzalez suggested joining the teddy bear initiative this past year to Perth Amboy Chief Roman McKeon, who knew packing the trunks of officers’ patrol vehicles with bears to take on difficult responses would create positive policing interactions. They started with just one bag of bears, but the venture grew exponentially within weeks.

Some Locals — like Perth Amboy — have decided to keep giving beyond the holidays and throughout 2021. As long as community members are donating new, unwrapped bears or other small stuffed animals, members will keep distributing the toys during responses.

“I remember that garage when [New Jersey] 101.5 brought two truckloads [of bears], and we had to send the trailer there to get the final load,” Colligan said. “I remember being in an accident when I was a kid, and my parents and I still remember it vividly. I was 4, so to have an officer come up and hand me a bear, I think it’s a great program. I thank 101.5 for getting as many as they do and for helping us just make that difference even in just one child’s life.” 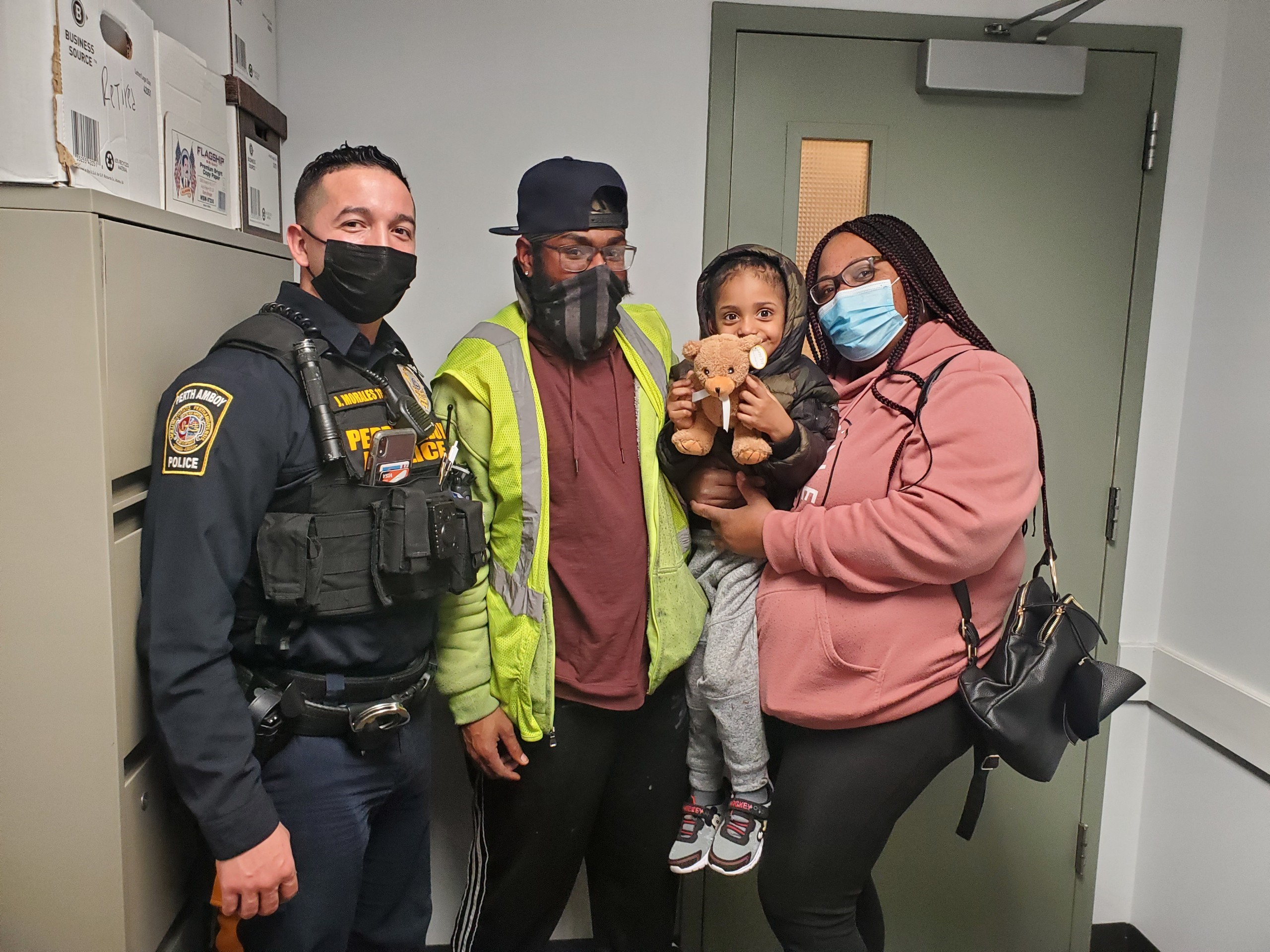 Perth Amboy Local 13 member Joel Morales gives a “Feel Better Bear” to a young boy waiting at the station to be picked up by his father after a domestic incident.

Open the trunk of a PBA member, and you’ll likely find a bag of teddy bears ready to gift to a child. Gonzalez remembers brightening the day of a young boy who had been in a domestic violence situation in March. The child was taken away from his mother and brought to Perth Amboy headquarters while he waited for his father to retrieve him.

While at the station, Gonzalez found an extra teddy bear in another officer’s vehicle to give to the child, who clutched it tightly while waiting for his father.

“The kid was so happy. It brought a lot of light to his eyes, especially the situation he was in,” Gonzalez expressed. “It was definitely comforting for him, and the parents loved it. They couldn’t thank me or the other officer enough. It’s simple to do something like that.”

Recently, a family with three children was in distress when their car was totaled. Perth Amboy Local 13 members gave out bears to the children. A few days later, McKeon was at a Mass honoring a pastor of the community when the mother of those children came up to him, thanked him profusely for the response and asked for just one more bear.

“‘I have to tell you, your officers did such an amazing job. We had an incident where we had this accident, and the officers gave teddy bears to our kids,’” he recalled the woman telling him. “They never saw anything like this in their lives.”

Members of Perth Amboy Local 13 see the teddy bears as tools for connection with community members. When they hand a stuffed animal to a child, they hope everybody watching understands that the officers and the residents are all part of the same team.

“It’s just one little, simple thing. A teddy bear could bridge the gap between someone that thinks different of us or make a big difference in a good impression,” Gonzalez relayed. “You could make one kid’s life a little bit different, and they can experience that with a police officer. I think that’s awesome. I think this program is great, that [New Jersey] 101.5 has partnered with the state PBA. Like I said, as long as those teddy bears keep coming, we’ll keep giving them out. Anything we can do as a police department to bridge the gap between the community.”