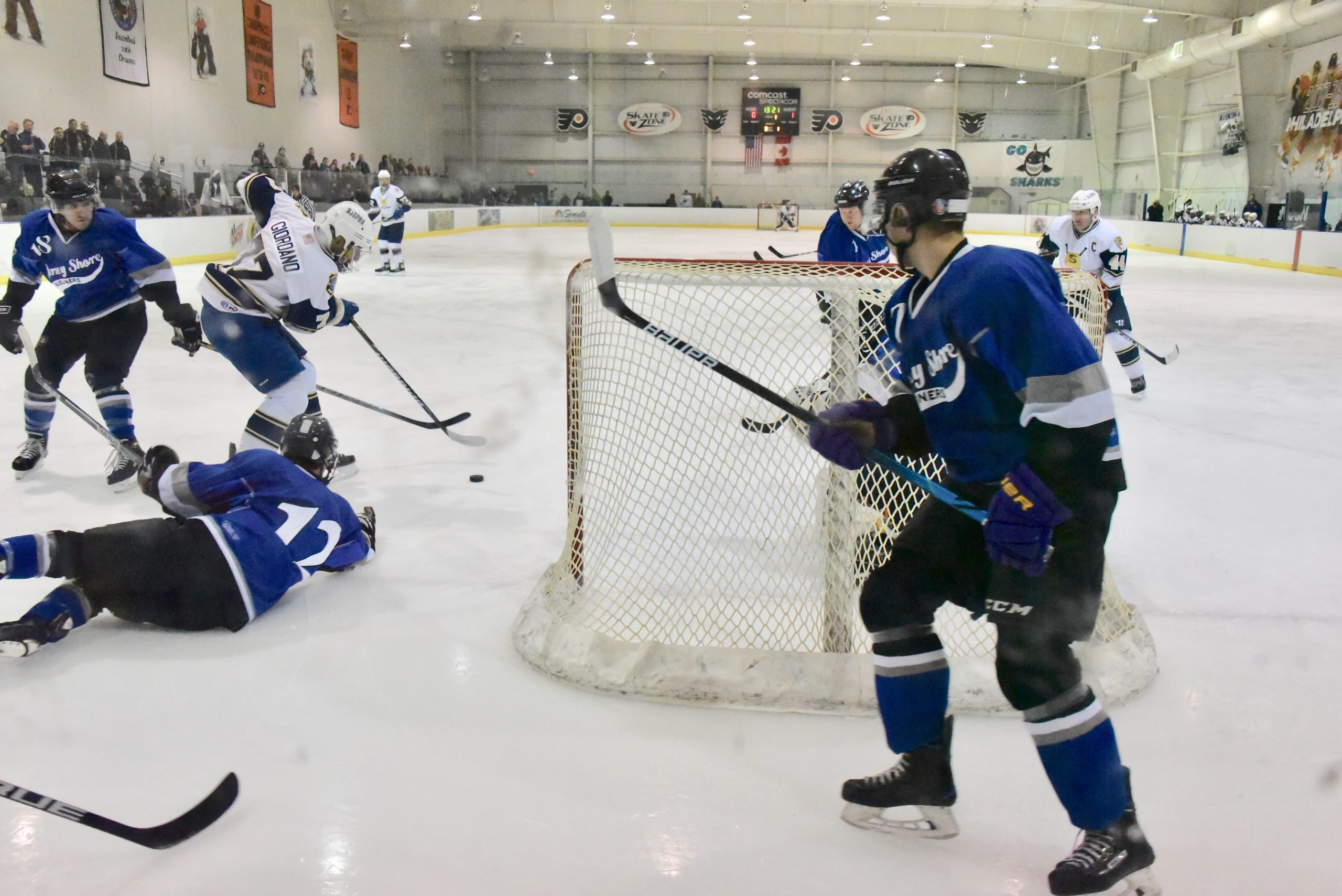 Two years of pent-up rooting desire and anticipatory energy had PBA members who filled the Atlantic City Skate Zone pumped up and primed to let loose on March 9. The annual Mini Convention hockey game pitting their own Jersey’s Strongest against AC Guns ‘N Hoses had members in the zone well before the game started.

Additional inspiration and incentive came from the game being a fundraiser to help Keansburg Local 68 member Dennis Valle, who was stabbed while responding to pharmacy robbery on Jan. 7. A longtime member of Jersey’s Strongest, Valle was on hand to drop the puck for the honorary opening faceoff and get the best therapy for his recovery: hugs and best wishes from his teammates and PBA sisters and brothers.

“Everyone is showing a ton of support. I don’t feel like I deserve it,” Valle confided. “I feel like I just did what anyone else here or who works on this job would have done. It’s very nice of the guys to play this game for me, and it’s very humbling.”

As Jersey’s Strongest came from behind three times, the decibel level climbed with each PBA goal. When Livingston Local 263 member Ryan Collis set up State Corrections Local 105 member Chris Connor to blister a shot from the high slot to make it 2-2 in the first period, it was game on and party on.

The atmosphere was equally celebratory when Rutherford Local 300 member Travis Ritter scored from an extreme angle to make it 4-4 in the second period. And when Hunterdon County Local 188 member Kevin Brown, who is on with Lambertville, fired an absolute BB to make it 5-5 with 46 seconds left in the second, well, this is what everybody came for. 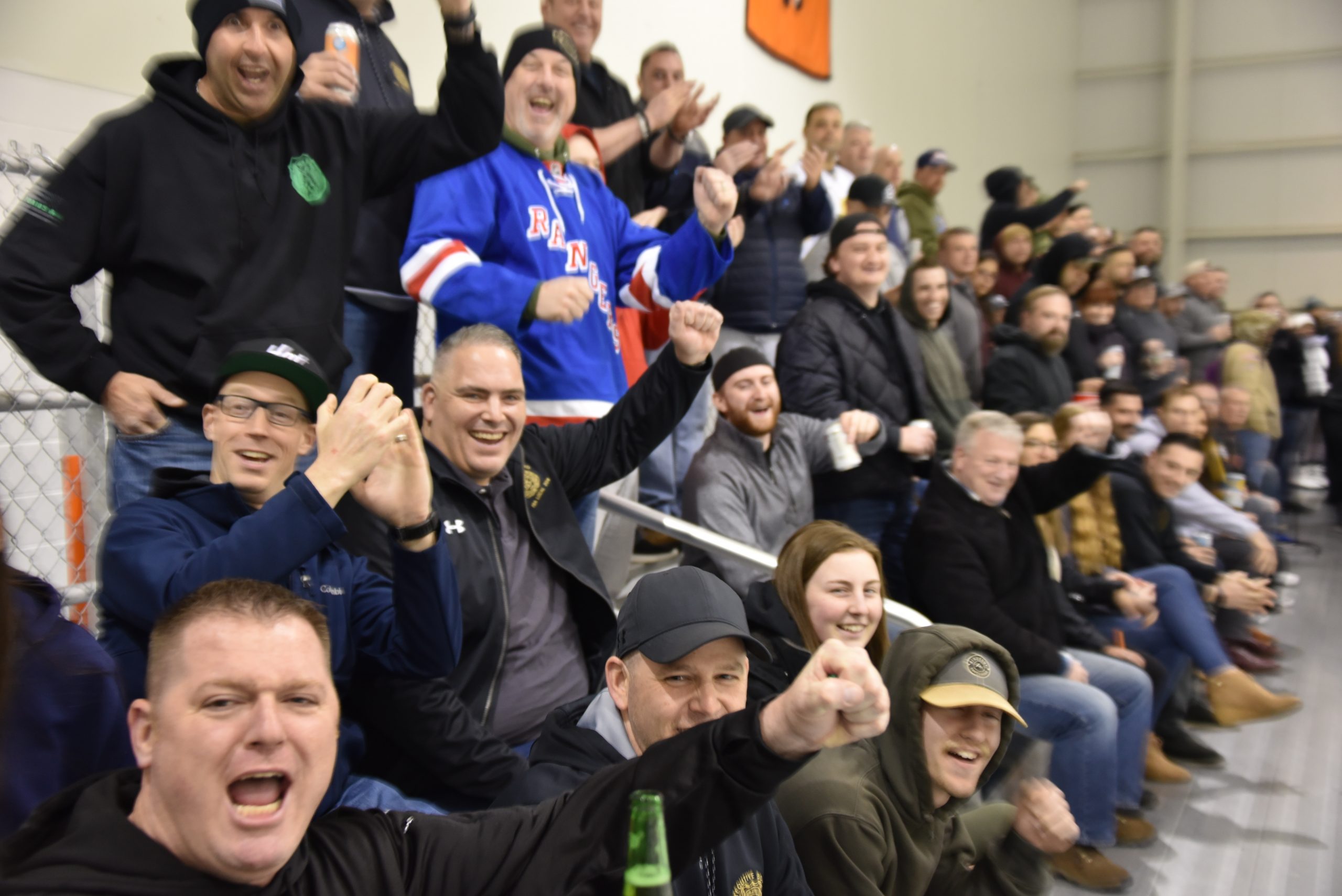 “In front of your home fans here for the PBA convention, it really gets you going,” Collis confirmed. “And to be able to play this game for one of our teammates is awesome. We all do the same job, and it could happen to any of us, so you just want to do well for him and everybody.”

By the time Guns ‘N Hoses held on for an 8-6 victory, the final score had little to do with the success of the day. Jersey’s Strongest being back on the ice is the icing on the cake of moving forward past two years of pent-up desire to enjoy all the trimmings of PBA membership.

Another raucous afternoon/evening with Jersey’s Strongest came on Feb. 26 when the team resumed its annual Outdoor Classic against Navesink Country Club in Red Bank. With a breathtaking sunset and the Navesink River providing a backdrop, Jersey’s Strongest scored a 5-3 victory, exhibiting its crowd-pleasing brand of hockey that makes the team such an attraction.

“It’s great to be back, almost as if we never missed anything,” Ritter noted. “We get to play for a lot of causes, and with everything going on, everybody’s excited to have a little bit of normalcy.”

Normal for Jersey’s Strongest is flexing its strength on the ice. A battle in front of the net resulted in Parsippany-Troy Hills Local 131 member Elvin Giordano muscling a shot into the net against AC for the first PBA goal.

Normal is Paramus Local 186 member Thomas Keough rushing up ice and unleashing one of his powerful slap shots as he did at 13:50 of the second to answer two quick goals from AC and make the score 4-3. Normal is Keough sliding a pass to Connor moving the puck the way Jersey’s Strongest has done for so many years to cut the AC lead to 7-6 with 5:19 left in the game. 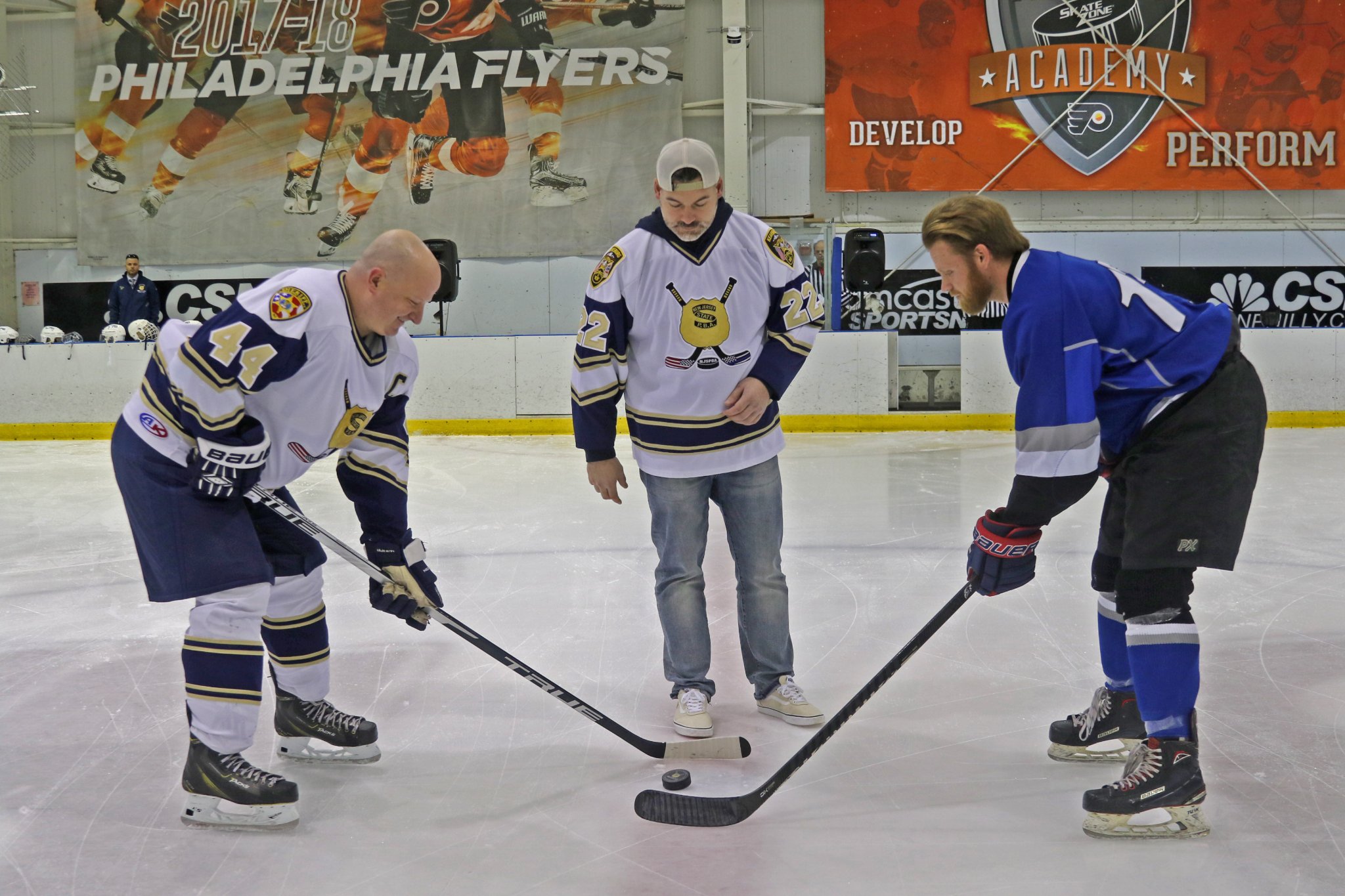 The Mini Convention game was played to raise money to benefit Keansburg Local 68 member Dennis Valle, who dropped the puck for the honorary faceoff

“Keough saw me the whole time, and it was beautiful,” Connor extolled. “It was a blast being in front of all the fans again, and we couldn’t ask for anything else.”

Even before the game offered the type of energy that comes when the outcome is in doubt in the final minute, Valle appeared to feel a lift from the magnitude of the event. He is awaiting another surgery to help heal the arm that was injured in the stabbing and is anticipating finding a date to return to duty after that.

But at the Mini Convention game, Valle appeared to be feeling good, almost as if he was back on the job. And that’s what Jersey’s Strongest intended.

“He definitely went through something rough, and it made it more special to play for a teammate,” Connor added. “Especially where he is her to watch, so it’s incredible.”

The absolute joy of being part of Jersey’s Strongest was also evident in the way Metuchen Local 60 member Joe Licata has stepped in net. Taking over lead goaltender duty with the injury to Elizabeth Local 4 member Joe Alessio has given Licata a huge dose of what makes being part of this team so great.

“Every time I get in the locker room with them, I feel like a little kid again,” Licata proclaimed. “At the end of the day, it’s a game. And it’s all about having fun.”

The pent-up desire to go all-out manifested in Jersey’s Strongest taking a 3-0 lead in the first period against Navesink in the Outdoor Classic. All three goals came from Wall Township Local 234 member Tyler Martin, who converted a sweet pass from Manalapan Township Local 229 member Kyle Williams on the second tally and tipped in a shot by Raritan Local 82 member Nick DePiano.

Navesink came back to tie the score, but in the third period Monmouth County Sheriff’s Officers Local 314 member Chris Paletto took a pass from fellow 314 member Dan Tacopino and scored the game-winning goal on a back-hander. Certainly scoring the big goal was exciting, but not the ultimate rush for Paletto.

“We’re always trying to do stuff to better the community,” Paletto offered. “If anybody ever has an issue, bring it to the table and we’ll get it done.” 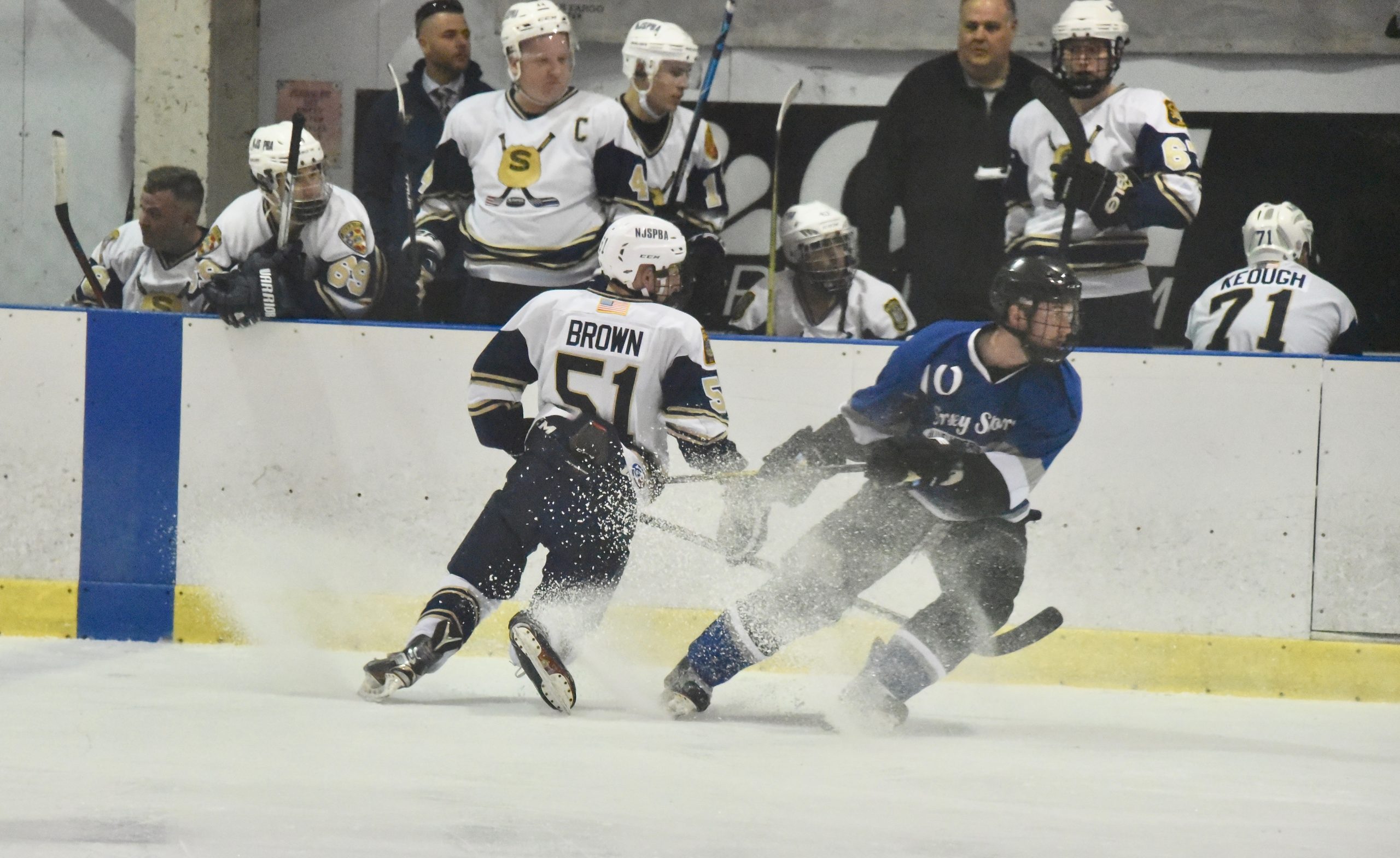