Look around the ballroom of the Town and Country Resort in San Diego during any of the days of the 2021 NJSPBA Main Convention. Nobody is sleeping. Laptops are open to take notes. Members are on the glued to their seats. Or on the edge of them. Even bathroom breaks seem to be delayed.

As a series of riveting presentations and must-see information sessions extended meetings into the mid-afternoon, PBA President Pat Colligan quipped about postponing lunch reservations. Yet there was no growling, save for a stomach or two.

The first NJSPBA convention of any kind since March 2020 compelled the 750 members who attended from Oct. 19-26 to not want to miss a moment. From the presentation, “From Inside the President’s Bunker” about the 9/11 attacks, to the most comprehensive PFRS update ever to one-of-a-kind primer on internet privacy and scrubbing to a view of “Life inside the Real Sopranos” to details of the work going on in Congress that profoundly affects all members, this convention offered a buffet of mesmerizing data and intel.

Convention Committee Chair Pete Andreyev, the PBA’s first vice president, and his committee members packed so much into the program that they didn’t even get to the business of the union until the third day.

“I can’t tell you how many people came up to me during the course of the convention to say, ‘Great speakers. This place is great,’” Andreyev reported. “Everything was just such a positive while we were there. And it was pretty cool to hear the members say how much they enjoyed everything.”

From where NJSPBA Executive Vice President Marc Kovar sits, he gets a pretty good read on the success of a convention. Sitting on the podium all day, he watches members’ reactions to the speakers and notices just how often people are leaving the room. It was tough to see very many members getting up other than to stretch in between presentations. 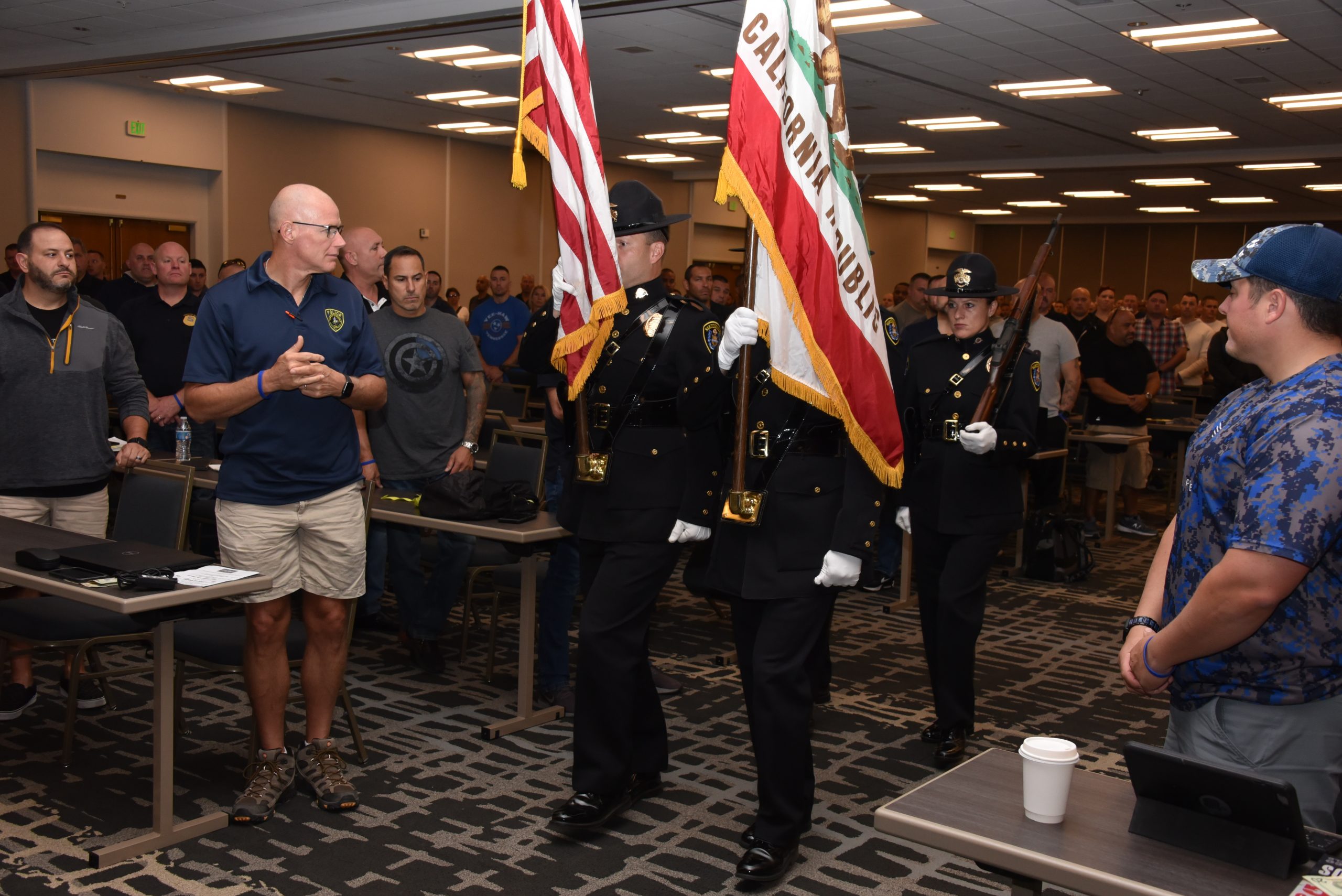 “We have a lot of new State Delegates, and it was an eye-opener for them to see how much we really do during a convention,” Kovar noted. “The room was packed, and it reminded members how important these conventions are.”

An agenda that included 14 major presentations, county conferences and Locals coming up on the podium to present checks to the PBA from fundraisers and sponsors offering great benefits for members still had room for some surprises. One of those came when a one-time NJ cop now working for the San Diego Police Department took the stage.

Jordan said he attended to rep Local 31, and then talked about how he had served as his San Diego union’s vice president before “eventually being seduced on the dark side of management and moved to lieutenant and captain.” He received ongoing cheers and applause before hitting members with an important message.

“I will tell you, having fought every single one of those battles, every one of those battles are worth it,” Jordan announced. “So I have a tremendous appreciation for those who are here, for the NJ State PBA. For all that you do in dealing with whether it’s paid benefits, police reform, all the different things that impact negatively and positively our jobs. The fact of the matter is, we will never be able to meet the needs of others unless we meet the needs of our own people. And I try never to forget that. And I always speak to the people who work for me as our people come first. Take care of their needs first.” 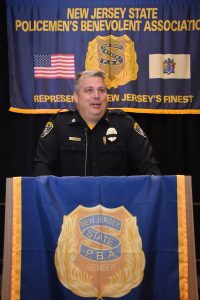 Former Rahway Local 31 member Jeffrey Jordan, a captain with the San Diego, gave members an important message during his remarks. 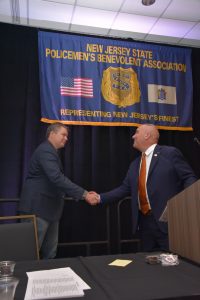 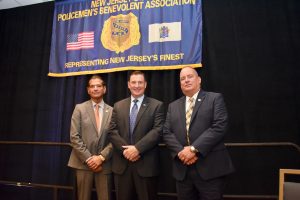 Executive Vice President Marc Kovar (left) and President Pat Colligan (right) with Lieutenant Colonel Robert Darling, who highlighted the conference with his presentation about being with the president during the 9/11 attacks.

Perhaps this convention had so many high notes because it certainly was a long time in the making. The PBA was supposed to come to San Diego for the 2018 Main Convention, but due to some extenuating circumstances, that was postponed until 2020. And then it was postponed to 2021 because of the pandemic.

At the end of the day, there was just enough time outside the meetings to enjoy a good cigar. Sitting out by fire pits especially set up at night by the resort for members, they networked and shared best ideas to enhance the ability to run their Locals. And that is always one of the main objectives of any convention.

To say the convention started with a bang understates the bang for the buck Locals had by sending members. Amid the PFRS presentation (see story on page 59) and a federal legislative update by Andrea Edmiston, the director of government affairs for the National Association of Police Organizations (NAPO), Jared Wilson of the San Diego Police Officers Association presented a session on internet privacy and scrubbing.

With the increase of doxing – the search for and publishing private or identifying information about a particular individual on the internet, typically with malicious intent – Wilson detailed the program his association has developed for officers to scrub their info from the internet.

“We’re seeing that activists, whether they be BLM or white power people, all kinds of different groups that just hate the police, like I’m sure in your neighborhoods, are doxing our officers,” Wilson informed members. “It scares them. It’s terrifying when someone shows up at your house. We’ve had residents who protest at our officers’ homes. So we’ve come up with some ways to help our members to really combat that. “

You can read more about the program that will help officers increase their online safety and privacy in an article Wilson wrote on page 57. But to emphasize the importance, note that Colligan confirmed he is already going through the scrubbing process.

“Everybody should take advantage of it before they find themselves in a situation where they need it,” Colligan added.

Kovar’s further assessment of the convention emphasized the significance the PFRS presentation. There was a highly impactful piece of news when Trustee Board Chair Ed Donnelly, the president of the FMBA, and Executive Director Greg Petzold shared that the believe the PFRS will be fully funded within the next 28 years.

And Kovar wanted members to remember how lucky they are after hearing from Philadelphia Police Officer Jesse Hartnett. Following up a presentation he made at the 2018 convention in Boca Raton, Hartnett recounted his survival story after being shot by a terrorist and was able shoot the feeling suspect, who claimed he pledged allegiance to ISIS, before fellow officers rushed Hartnett to the hospital.

“We saw how his department came together and got him to the hospital just in time before he died,” Kovar shared. “It was a great team effort.” 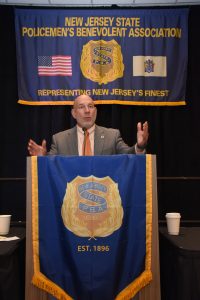 Attorney Frank Crivelli makes a point during his presentation on social media and first amendment rights. 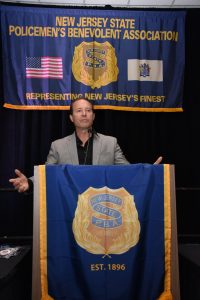 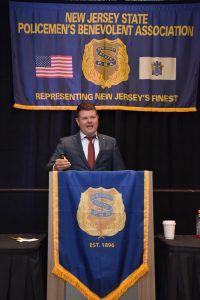 Philadelphia Police Officer Jesse Hartnett once again spoke to members about his heroic response in a terrorist attack.

Retired New Jersey Police Officer Giovanni Rocco piqued members’ interest by telling his story of going undercover as Giovanni Gatto and being at the epicenter of Operation Charlie Horse. The operation ultimately brought down 10 members and associates of the New Jersey’s DeCavalcante crime family, the organization knowns as the “Real Sopranos.”

Balancing the story-telling with essential information, attorney Frank Crivelli from the firm Crivelli, Barbati & DeRose, LLC that represents many PBA Locals, spoke about “Social Media vs. Your First Amendment Rights.” And Integrity Health Chairman and CEO Doug Forrester updated members about the progress of the First Responders Partnership Healthcare Center that will provide them a one-stop healthcare option.

The hit of the convention, however, might have been Lieutenant Colonel Robert J. Darling, USMC retired, whose presentation “Inside the President’s Bunker: Crisis Leadership and Decision-Making” was based on his book, “24 Hours Inside The President’s Bunker 9-11-01 The White House.”

After piloting attack helicopters in Operation Desert Shield and Operation Desert Storm and as a presidential pilot with Marine Helicopters Squadron One, Colonel Darling was handpicked to work for the White House Military Office, Airlift Operations Department. In that position, he supported the president, vice president and national security advisor during the 9/11 attack in the underground President’s Emergency Operations Center and witnessed the leadership and decision-making at the highest levels of government.

Ironically, the PBA didn’t secure Colonel Darling as a speaker until a week before the convention. But nobody was more excited to be there than the colonel.

“You know I’ve been doing this presentation for about 10 years now, when the National Security Council gave me permission to tell you the story I’m going to share with you today,” Darling began. “But it hasn’t been too often that I get to come out and meet the actual frontline war fighters of America. When I get an opportunity to come and speak to you, I’m here. I’m all over it.”

Read more about Darling’s presentation on page 58, during which he shared how he flew Marine One in the Clinton administration. That story alone confirmed why he was such a big hit.

“I thought I was going to hate it,” he explained. “You’ve got to get dressed up. You can’t use the “f” bomb. You can’t yank and bank and scare the President in the helicopter. You’re really supposed to know what you’re doing. But I’ve got to tell you, President Clinton, he would come to the cockpit. He looked right at you, and, for a brief moment, you thought you and the president of the United States just might be buds.”

The PBA had worried a bit about traveling across the country for a convention. But members expressed just the opposite. And as such, the convention left a memorable taste in everybody’s mouth even without the cigars.

“The location as far as San Diego couldn’t have been better,” Colligan stated. “Other than some minor hiccups which are bound to happen, I haven’t heard about any major issues. And to have a Main Convention that was well-attended and went off really well was a nice treat.”