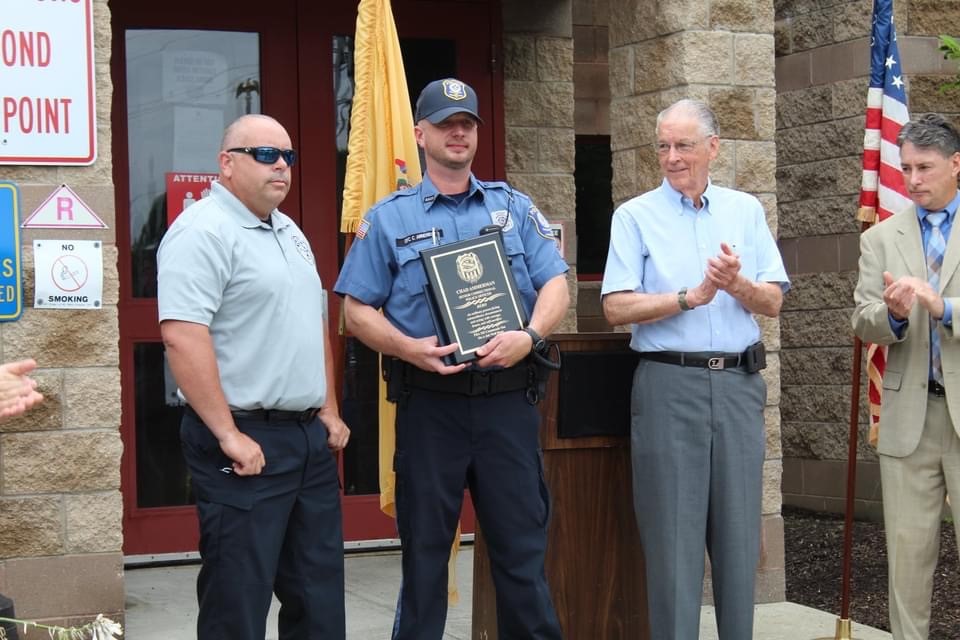 State Corrections Local 105 member Chad Ammerman was off duty and fishing with three friends in the open waters of Barnegat Bay at 5:30 p.m. on June 22 when a 10-year-old boy ran over and said he could hear someone yelling for help in the water.

“We couldn’t hear [the victim],” Ammerman explained. “But we could tell it wasn’t a bird out there sitting. That’s how far out he was.”

Ammerman, 41, and his friends dialed 911 to report the situation. The dispatcher relayed that they were receiving conflicting reports of the location and were going to take another 40 minutes to arrive. But Ammerman didn’t think the victim, who appeared to be 400 yards away from shore, would be able to survive that wait.

“I told her that I didn’t think he was going to make it that long,” Ammerman recalled. “She asked if I could get to him. I said I was going to try.”

Immediately, Ammerman dumped the contents of his cooler and jumped into the water with it.

“I wasn’t sure what shape I was going to be in if I even got to him,” Ammerman mentioned. “I took that white cooler because if I got to him and I couldn’t get him back, at least they’d have something easy to see and we could hold onto.”

The 40 mph winds and strong waves cut off Ammerman’s sense of sight and direction, but he was able to see his friends, who were on higher ground on shore. The friends used hand signals to direct him left or right as he kept swimming, one hand on the cooler, toward the 82-year-old victim.

“The tide was taken so fast that I had to actually swim around it,” Ammerman remembered. “Once I got out there, he said that he didn’t have anything left [in him].” 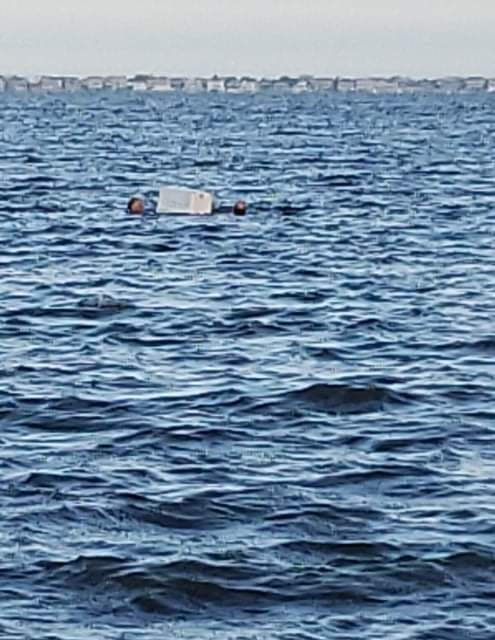 The victim didn’t have the energy to swim back. Ammerman asked if he’d be able to hold onto the cooler, and the victim said he’d try. With the cooler — and victim — in one hand, he used his other hand to start making the trek back to shore.

Along the way, Ammerman learned that there was a second victim in the water. As it turned out, the men, who were brothers-in-law, were out at sea when their boat capsized. As the one drifted away from the boat, his brother-in-law was able to get back to the boat and hold onto a rope. The men had been treading water for three hours.

Just 40 yards from the shore, a boat with first responders finally arrived and grabbed Ammerman and the victim.

“I should have just waved the boat out of the way,” Ammerman joked. “Now that I think about it, I was right there.”

While Ammerman was giving a statement to local law enforcement officers who arrived on the scene, including information about the second victim, he had to stop. He had just swum for more than an hour while pulling another human for half of it, and it was getting to him.

“I puked my guts out for about five minutes,” Ammerman described. “I was exhausted.”

The rescue crew was able to find the second victim, who was still holding onto the capsized boat, an hour later. Meanwhile, the 82-year-old man expressed how Ammerman came to his rescue in the nick of time.

“He said he wouldn’t have made it if I hadn’t come out,” Ammerman noted. “But if the little kid hadn’t heard him, none of the grown-ups would have. [The victim] would’ve went right past us.”

Ammerman credits the successful rescue to his quick thinking of bringing the cooler. Not only would it have been a way for people on shore to identify them in the water, but it was also the reason the victim didn’t have to put all his body weight on Ammerman.

“The only thing that probably saved both of us was me taking that cooler,” Ammerman suggested. “Me just having the frame of mind to take something out there, because even he said he might’ve drowned me. He was that desperate.”

Although Ammerman was not certain he’d be able to rescue the victim, he did not think twice about doing whatever he could to help. As a law enforcement officer, off duty or not, and a former military member, this was second nature to him.

And he never wanted any recognition. But Ammerman’s wife, Ashley, posted about the incident on Facebook. He said he was not planning on telling anyone about it, because this was just him instinctively reacting and doing what he felt was right.

“He’s like, ‘I didn’t want anybody to know. I just wanted the guy to be OK,’” Ashley noted. “He said that if it was him out there, he would hope somebody would do the same thing for him. He wasn’t going to let somebody float out to sea.”