‘He was completely committed’ 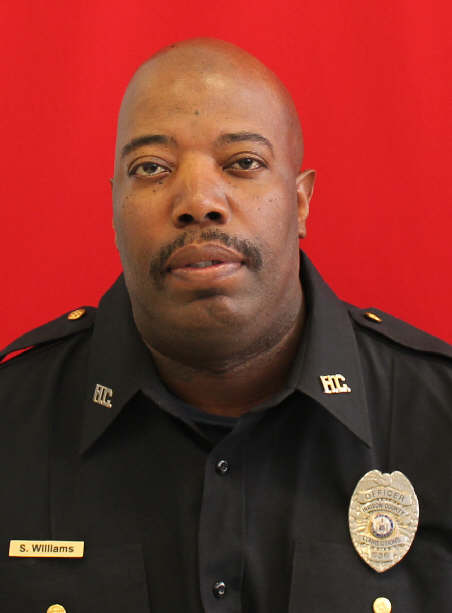 On Dec. 21, Hudson County Corrections Officers Local 109 President Derrick James found himself working a hospital detail across the hall from where Corporal Shawn Williams was in isolation. As James stood behind the glass motioning to Williams, who had been unresponsive for several days, he saw his lifelong friend move. It was a moment James will always remember as he said goodbye to his brother.

“I was elated with his response,” James reflected. “Thinking about standing in front of his hospital window, communicating with him with hand signs, will be an everlasting memory for the rest of my life.”

Williams, 54, passed away on Dec. 22 from COVID-related complications. He leaves behind his loving wife, Laura, daughter Starasia, son Syncier, a department that will deeply feel his loss and a community that loved him.

Williams joined the Hudson County Corrections Housing Unit in 1994 and dedicated his life to working among inmates for 29 years. He also served as the sergeant-at-arms for Local 109. He was often seen working tirelessly, extending his work hours each day. And as a lifelong resident of Jersey City, Williams was community-oriented and committed to helping residents.

“To know Shawn, just saying he’s a great guy is enough,” James declared. “We all agreed that he was a great guy. We could stop there. He will be sorely missed.”

James, who had known Williams for more than 30 years, worked on the midnight shift with Williams when he first came on the job. And back then, as his training officer, James recounted that Williams was always providing guidance with a calm nature and never complained about the tough working conditions.

If there was ever a time when an officer was needed for any detail, Williams was the first to respond and show up. He reflected kindness and compassion to everyone he encountered and without hesitation would give you the shirt off his back. He was passionate about his job, and it was effortless for him because he knew he was helping someone who needed it. That’s what his life was all about.

“Him doing his job was easy because he grew up and lived in that community his entire life. And it’s the community primarily that the prisoners come from,” James explained. “And he never had a problem dealing with inmates because either he knew their parents or he went to school with them. He was completely committed and invested in the community as it relates to his service and to the citizens of Hudson County.”

Williams’ kindness and compassion are something that will always be remembered by his friends, family and colleagues. He leaves behind a legacy of friendship, benevolence and a hardworking nature that many are eager to follow. Williams was invested in those around him, and that made a difference in the lives of so many.

“Shawn would give you tireless advice on how to get yourself together if you were not doing well or you’re out of work, or you’re facing homelessness or hunger,” James added. “Shawn was that guy. He encapsulated what it is to be not just a corrections officer, but a mentor, a parent, an uncle.”