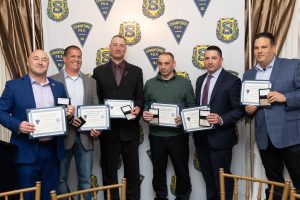 Cranford Local 52 hosted the 2022 Silver Card Recognition Dinner on March 30 at the Cranford Social to honor members who have performed heroic acts in the line of duty.

NJ State PBA President Pat Colligan and the Cranford town council came together to present awards to members and civilians.

“I can’t remember ever seeing an entire town council together,” Colligan told NJ.com. “Let alone at one table. [I was] struck by the genuineness of the room.”

Before the ceremony began, members stood for a moment of silence, led by Commissioner Mary O’Connor, in memory of Dorothy “Dottie” Baniewicz, the 2017 Cranford PBA Honorary Silver Life recipient who dedicated her life to serving Local 52 and passed away on March 13.

Two Merit Awards were presented to members who saved the lives of a resident and a newborn baby.

Local 52 Lieutenant Christopher Polito and Detective Corey LoForte, along with retired CFD Captain Frank Genova, received a Merit Award for saving the life of a resident who collapsed in November at Cranford’s Municipal Building. They successfully resuscitated the resident, who was safely brought to a hospital to recover.

In December, Bell and Knight were dispatched to a Cranford home where a woman was in labor. While there, Bell realized the umbilical cord was wrapped around the baby’s neck. Bell and Knight safely removed the cord and delivered the baby without further complications.

Local 52 State Delegate Robert Chamra was chosen for the 2020 Robert Hand Brotherhood Award, for best representing the tradition of brotherhood.

Residents and local business owners within the community were also presented with awards for showing their support. Local 52 presented one of the highest honors from the PBA for a civilian, the Honorary Silver Life Card.

The 2019, 2020 and 2021 recipients were John Roder of River and Rail Cantina, Mario Haddad of Golden Touch Jewelers, Caren Demyen of FLAG for Cranford, Karl Spinner of ServPro, Franco Vitella of Venue 104 and Paolo Fontana of Subology.

The evening was a display of the members who have gone above and beyond in their service to the community and the residents who have shown their unwavering support for law enforcement.

“Cranford has hit a home run in developing relationships within the town,” Colligan commented to NJ.com, “and should serve as an example for others.”