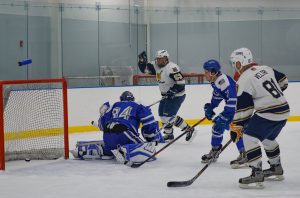 Faith, let alone fate, would have been served had Jersey’s Strongest NJSPBA hockey team game against the Woodbridge Police Department on April 29 been played for the benefit of the American Foundation for Suicide Prevention. With three more NJ law enforcement officers taking their own lives during an 11-day span in April and May, raising awareness for the cause couldn’t have been more timely.

But faith combined with fate to form a majestic power play in Jersey’s Strongest 6-3 victory. The team decided to play for the Foundation to honor Nicholas Tacopino, the cousin of Monmouth County Sheriff’s Officers Local 314 member Dan Tacopino and Jersey’s Strongest captain, who had recently taken his own life.

With 90 seconds left in the third period of a game in which the lead repeatedly changed hands, Taco found the puck on his own blue line. Jersey’s Strongest had just taken a 4-3 lead and the Woodbridge net was empty. Taco hoisted a backhand shot that cleared the heads of everybody on the ice, landed in front of the Woodbridge net and bounced in for a 5-3 lead.

“I wasn’t even supposed to play in this game because I wanted to be with my family,” detailed Taco, who didn’t have a jersey and had to wear the one his wife Maggie dons for the games. “After the goal went in, I went right to my family and blew them all kisses. It was surreal. It makes you believe.”

Faith had passed the puck to fate long before that goal. With Jersey’s strongest trailing 3-2, the referees asked Taco what he wanted to do if the game ended in a tie. Would they want to play overtime?

“I turned to may go-to guy, Brian Kelly, and asked him what he wanted to do,” Taco said of the Livingston Local 263 member, who is the assistant captain. “He said, ‘We’re not going to overtime. We’re winning for your family.” 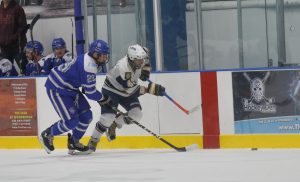 On the very next shift, Montclair Local 53 member Scott Berry had the lead on a two-on-one rush. As one of the bigger players on the team, Berry’s role is not as the typical goal scorer. But her finished the play with the tally to tie the game. And then another unlikely hero, Bloomfield Local 32 member Luca Piscatelli netted the goal to put Jersey’s Strongest ahead, 4-3.

Faith also had a linemate on this night. Howell Township Local 228 Mike Silvani had lost his brother to suicide in December 2015. So he had profound inspiration when he took the ice.

Woodbridge had the lead early in the second period, when Kelly and Silvani generated a two-on-one. Kelly set up Silvani to put a shot in the net, which might have been a three-on-one with Rick on the other wing.

“You know it very well could have been,” Silvani shared. “The shot actually hit the crossbar and it went down and in. Maybe he was there.”

Silvani also scored the second goal for Jersey’s Strongest by coming out of the corner to maneuver around the goalie and bury a shot. Silvani’s family had started a foundation in his brother’s name to help raise money and awareness for the American Foundation for Suicide Prevention, so he relished this opportunity to reinforce an important message.

“The biggest thing is for everyone to know they are not alone,” Silvani continued. “There are people out there who to help you. We want to help you. The world’s better with you here.”
Nicholas Tacopino’s father, Frank, and Taco had grown up together. Frank now lives in Florida, and the family could not make it there for the funeral. So he came to Jersey for this game, which was the tribute and honor the family needed. One family member actually sang the National Anthem. Another dropped the puck for the ceremonial faceoff to start the game.

“I had about 50 family members at the game, and they were all going crazy when I was lucky enough to get that goal,” Taco related. “I hate being the person in the spotlight, but a lot of the guys were coming up to me saying, ‘You deserve it.’ It makes you believe for sure.”