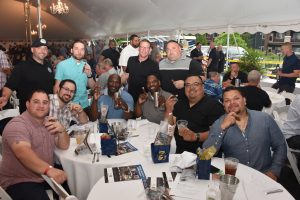 The cloud of smoke extended from Elk to Hamburg on June 7, when the NJSPBA held its second Annual Cigar Gala to benefit the Survivor and Welfare Fund at the haven for first responders known as the Crystal Springs Resort. To understand how much of a good time was had by all, some of the 500 attendees made the round trip from Elk in Gloucester County to the Springs.

“Obviously, we marketed to the PBA Locals, but we had people there from different unions, sponsors and people who were just cigar aficionados,” observed Dunellen Local 146 State Delegate the event’s co-chair. “The word has spread about this now, and it’s the enjoyment that makes the night.”

The caliber of enjoyment manifested when the winning ticket for the 50/50 raffle was pulled. Not what you’re thinking. Not about the cash. The experience was priceless.

“My consistent bad joke is that nothing empties a room like pulling a 50/50,” NJSPBA President Pat Colligan submitted. “But I noticed 20 minutes later that the place was still packed.”

As Dudley and fellow chair Vito Spadea, the Somerville Local 147 State Delegate, made the drive back home from Crystal Springs the morning after, you could hear it in the voices how the Cigar Gala has become one of the PBA’s signature events. Or maybe lack of voice due to the good times (cigar) rolling well into the wee hours of the morning. 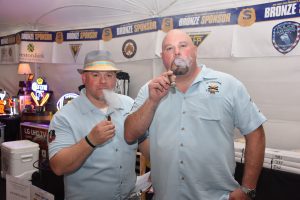 With the jolt of support the event provided to Survivor and Welfare – approaching six figures again this year due to the unconditional giving nature of members and generosity of so many business like premier sponsors Capital Benefits and Edgewood Properties – the cause is, of course, the hub of the delight and gratification. And the foundation of why it’s a Cigar Gala rather than just a cigar night.

But in smokes alone, the PBA Cigar Gala goes where very few cigar nights would ever attempt to venture.

“Outside of commercial cigar companies, this has to be the largest cigar event really,” Colligan added. “I think you could look at other states, and I don’t know anybody who can pack a tenet with 500 people.”

It’s one of those nights people circle on the calendar six months ahead. It’s one of those nights that the public should get to see how much fun it is to hang with cops. Even through the aroma that sweetly accumulates under the tent Crystal Springs put up on the lawn in front of the main entrance, it was not hard to see the gargantuan smiles and hear the laughter drowning out the all-night set of feel-good music.

“We knew we had a good time last year, and I think we had more people thanking us at the end of the night this year saying they had a great time,” Spadea shared. “This is for the survivors, and I can tell you that so many people said, ‘Wow, what a package you put together.’”

You know you have a world class event when elected officials buy tickets to attend. State Senator Steve Oroho and Assemblyman Hal Wirths, both from Sussex County where the Springs is located, joined the party. And they thanked Colligan, not just for the enjoyable evening but for how the PBA injected so much into the Sussex County economy when you think about buying gas, food and the many members who spent the night at Crystal Springs.

The PBA can certainly add that to the way in which this night generated a bounty of giving back. And perhaps that propensity brought out so many sponsors. Dudley marveled at how they stepped up for the Cigar Gala even though they have given and given to the PBA over and over again. 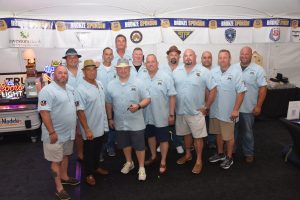 Clearly, the Cigar Gala has just done something special. It was not hard to tell how with the way the Capital Benefits principles Joe Ablahani and Eric Murtha wore the custom shirts the Gala committee sported and gifted to them for their sponsorship as badges of honor.

“We just want to keep on giving back because they give so much to everyone else,” Ablahani submitted. “The friendships we have made are just a beautiful thing. And if we can give a little help to those families that gave so much to us, that’s the important part.”

So many people made the Gala such a good time and there are so many people to thank. Spadea and Dudley wanted to thank their families for allowing them the immense time needed to make the Gala roll. On that note, Dudley confided that the chorus his daughter performs with was singing the national anthem at the Somerset Patriots baseball game that night, and he listened to it via FaceTime.

Local 53 member Christian Dorsey heard about what a good time the Cigar Gala was and came this year for the first time to check it out. Suffice to say he could not have imagined just how much fun and how inspiring it was.

“I mean this is crazy being under a big tent in Sussex County,” he began. “You know, it’s insane what people do when they come together like this. It’s just really great to see for the cause and that we can all come together and enjoy a night.”

All that said, make sure to circle your calendar when the date for the 2023 NJSPA Annual Cigar Gala is announced. And then get ready to let the good times roll.