Digging through the Trade Center rubble on Sept. 11, Paul Nunziato searched for 13 of his colleagues. His friends. His brothers. For 22 hours, he worked the area looking for the 13 Port Authority Local 116 members assigned to the PATH station, where he served as unit’s delegate, lost that day.

The effort eventually went from search to recovery to rebuilding. Nunziato only intensified his efforts for Local 116 every day since. Relentlessly, tirelessly, he has served for 34-plus years, the past 11 as Local 116 President. 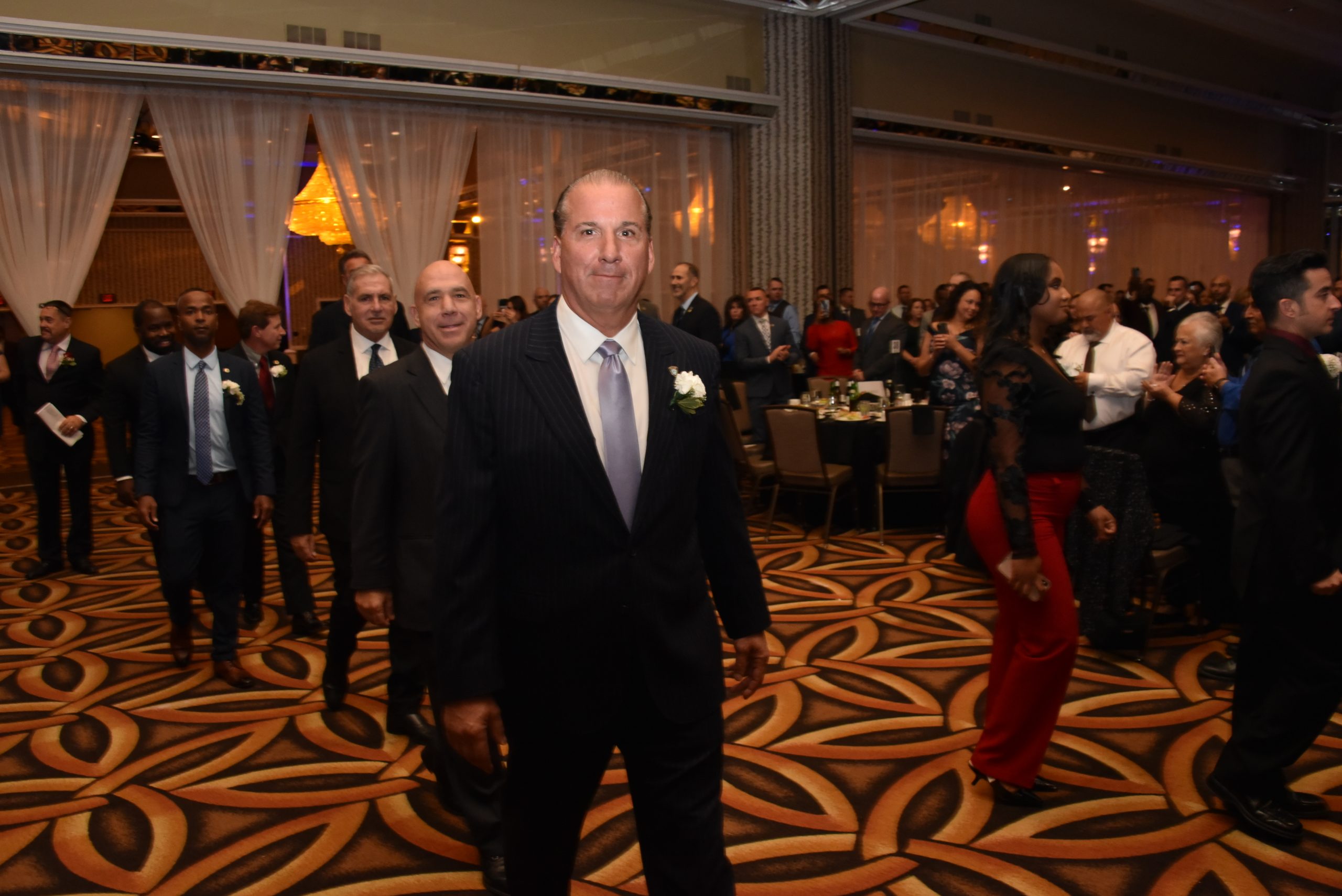 Port Authority Local 116 President Paul Nunziato walk into the NJSPBA Valor Awards where he was honored for his 34 years of service.

And only now is he taking a break. After serving as the Local 116 treasurer, second vice president, first vice president and president, Paul Nunziato is retiring. One of the most devoted leaders the PBA has ever known, he has established a legacy as one of those bedrock union guys who never quits.

“I think he’s one of the most knowledgeable union leaders I’ve ever seen,” praised NJSPBA Executive Vice President Marc Kovar who met Nunziato approximately 20 years ago when they were both rank-and-file guys that this union has been built on. When Kovar ascended to his current position, one of the first people he started calling for advice was Nunziato. He has called many times since.

“He’s never led me down the wrong path, and he’s come up with some phenomenal ideas I would never think of,” Kovar continued. “If everybody got a little bit of knowledge from him, they’re a winner.”

In 2002, Nunziato came on full time at the Port Authority union hall as treasurer. With the 37 Port Authority members lost that day – the single greatest loss of law enforcement on any one day ever in U.S. history – 65 children were left behind. The Port Authority established a fund to benefit those children, and Nunziato became the trustee.

He has looked after each of those children like his own. And in his nearly 20 years as a union executive, Nunziato has always made about everybody else.

“I’ve always been an underdog guy, so the way I teach my new delegates and board members is, ‘Hey, there’s a cookie jar. You’re getting the last cookie out of the jar. So make sure there’s enough cookies for all your members,’” Nunziato related. “And that’s just been my approach to trying to do the right thing. If you can help somebody, you help them.”

Nunziato’ s approach also fit right into the legacy previous Local 116 presidents Dominick Evangelista and Gus Danese established and trained him on. He also learned to cut his teeth under past NJSPBA president Mike Madonna.

“I never wanted to be a union guy. I wanted to be a police officer and that morphed into watching other guys not get treated fairly by the Port Authority or a supervisor and stepping up and saying, ‘Hey, that’s not right,’” Nunziato explained. “And that’s the approach I have taken my whole career.”

Nunziato confided that he hopes his legacy is being out there protecting the members all the time because that’s what union leaders do. That’s why he has formed such a bond with Kovar and NJSPA President Pat Colligan, whom Nunziato respectfully and affectionately refers to as “Paddy.” That relationship no doubt led to honoring Nunziato with the 2020 “Friend in Labor” award at the NJSPBA Valor Awards in November.

One of the highest profile achievements Nunziato can celebrate is bringing the Port Authority cantina online. Much like the PBA’s special services trailer, Local 116 takes its cantina to line-of-duty-death funerals and other events across the country to help feed officers.

One of the first events they traveled to was the Boston Marathon bombing. And they have returned to Boston every year on Patriots Day to support officers working the immense Marathon detail.

Officers in Boston or anywhere in the country might see Nunziato show up with that cantina because even in retirement, he will never quit. Kovar shares that there will always be a place in the PBA for Nunziato’ s don’t-sugarcoat-it persona that “always leads members down the right path.”

His parting thoughts begin with a shout out to Colligan and Kovar, to whom he is grateful for allowing him to be in the trenches with them. Beyond that, he has a simple concluding statement – straight forward with no B.S. as you would expect.