Hitting it out of the Park for the Fallen

More than 150 PBA members participated in the seventh annual Families Behind the Badge Softball Tournament.

When Woodland Park Councilwoman Tracy Kallert began the Families Behind the Badge Softball Tournament seven years ago, she never imagined the immense support it would bring for the NJSPBA Survivor & Welfare Fund. And starting out with eight teams, she never thought there would now be a waiting list for Locals to participate.

Each year, the tournament is played in honor of fallen officers, with all proceeds benefiting the Survivor & Welfare Fund. To date, the event has raised more than $80,000 for the fund.

This year held a special significance, as two fallen officers, Benedetto Christiano and James Peri of Bloomfield Local 32, were honored. 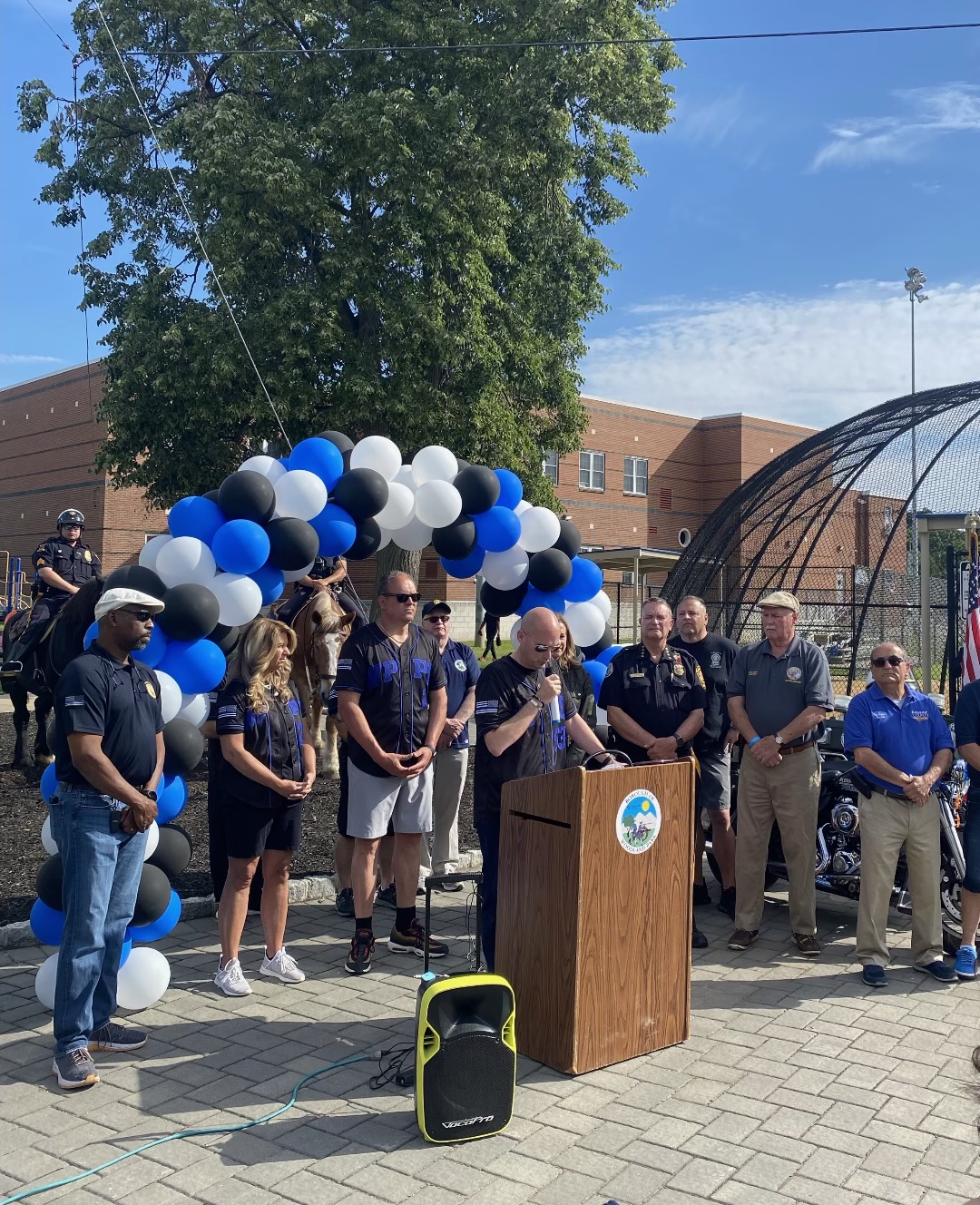 “Everybody had a story about how great these guys were,” Kallert recalled. “This year was extraordinary, with the outpouring of love and support for these two men. So many people emailed us and told us how amazing they were. And that just totally made us want to make this event even better.”

At the start of the tournament at Memorial Field in Woodland Park on June 11, honor guard members from various departments posted colors for the opening ceremony. Bloomfield Captain George Ricci stood to say a few words and presented plaques to the families of Christiano and Peri.

Both officers passed away in 2021 due to COVID. A lifelong resident of Bloomfield, Christiano was a Local 32 member for 28 years before retiring in 2020. Peri served with the Passaic Police Department for five years before transitioning to Bloomfield, where he served for 11 years and made detective.

“The opening ceremony, I would say, was probably the most memorable thing this year,” Local 32 member Luca Piscitelli stated. “This year was extra special for our Bloomfield team, because we were playing for them and honoring them and their families.”

The turnout inspired Kallert to aim for allowing even more teams to participate in next year’s tournament.

“In the beginning, we were begging for teams, and now we do actually have a waiting list,” Kallert remarked. “So if we can secure more fields next year, we would love to bring it up to at least 14 to 16 teams.”

While the games were taking place, Kallert and her daughter Kaitlyn, along with Councilman Vincent De Cesare, sold T-shirts in honor of the fallen officers and drinks and refreshments that were donated by local businesses. By the end of the tournament, $7,500 had been raised for the fund.

“I never thought that we could get something going like this, because we basically have no knowledge of how to do any of this,” Kallert admitted. “It just proves that anybody can if you’re committed, and I’m just so proud of this organization and all of the supporters that come forward and just give.”

As the last game was played, cheers rang out for Paterson Local 1 members, who took home the championship by defeating Montclair.

“If there’s any way that the current officers can pay their respects by having a tournament such as this, [they’ll do it],” said Montclair Local 53 State Delegate Joe Savittieri, who served as the PBA’s Families Behind the Badge liaison. “There’s a lot of
satisfaction to the guys and girls that are playing, because the families are there and [these officers] are not forgotten.”