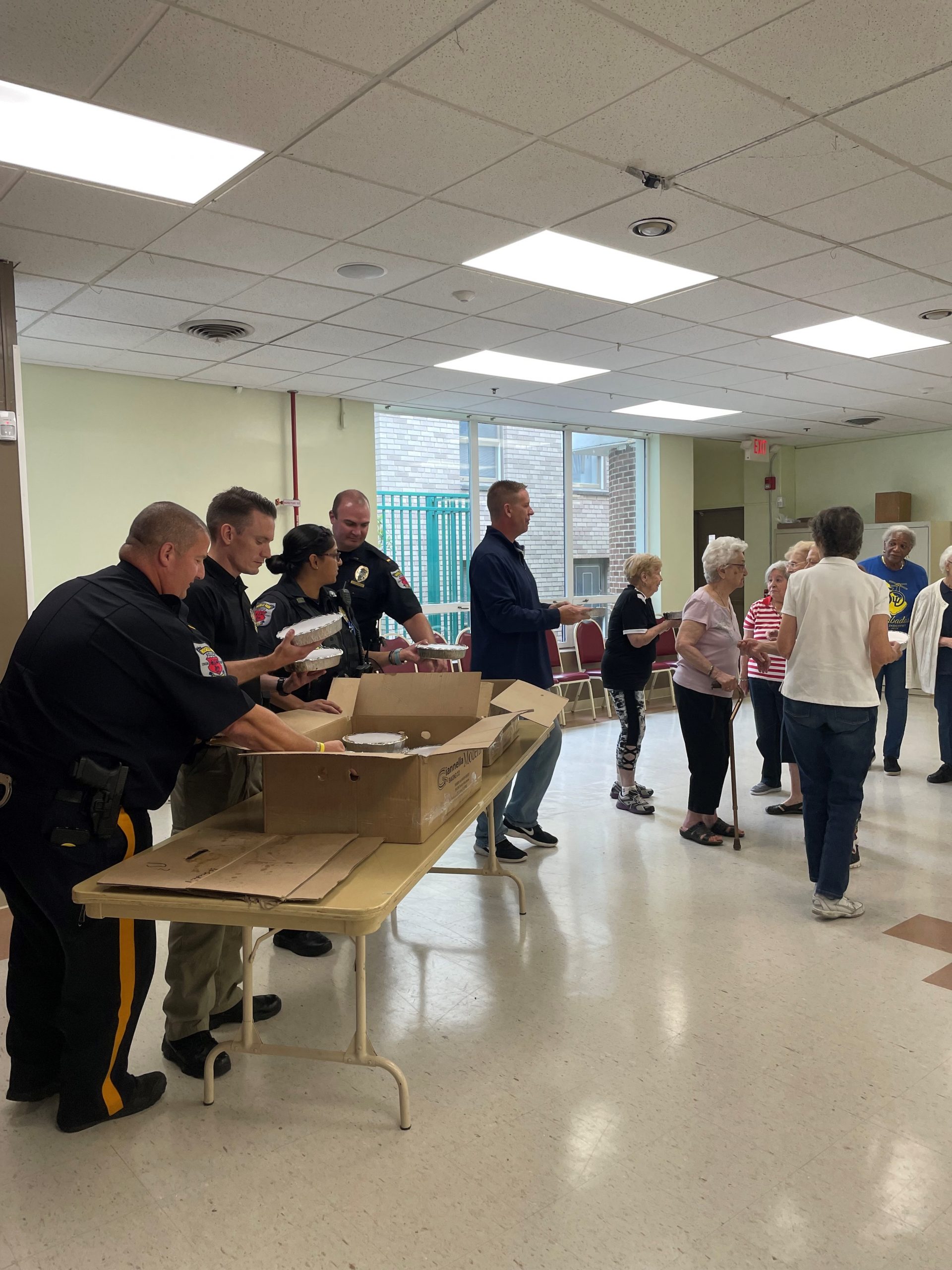 Roselle Park Local 27 members visited the community center to distribute 200 meals every week of July in a partnership with the FeedNJ program.

In four separate events, 15 members of Local 27 spent the month of July delivering a total of 800 hot meals to seniors at the town’s community center.

“They were really appreciative,” Polakoski recalled. “I think with COVID and everything going on, they really did rely on the senior center for assistance, not just with meals, but also social interactions.”

The meals, from Bella Gina’s Italian Restaurant in Linden and Wei’s Buffet in Roselle, consisted of a protein, a starch and a vegetable. And the members took the extra meals to a summer camp, for children to take home. 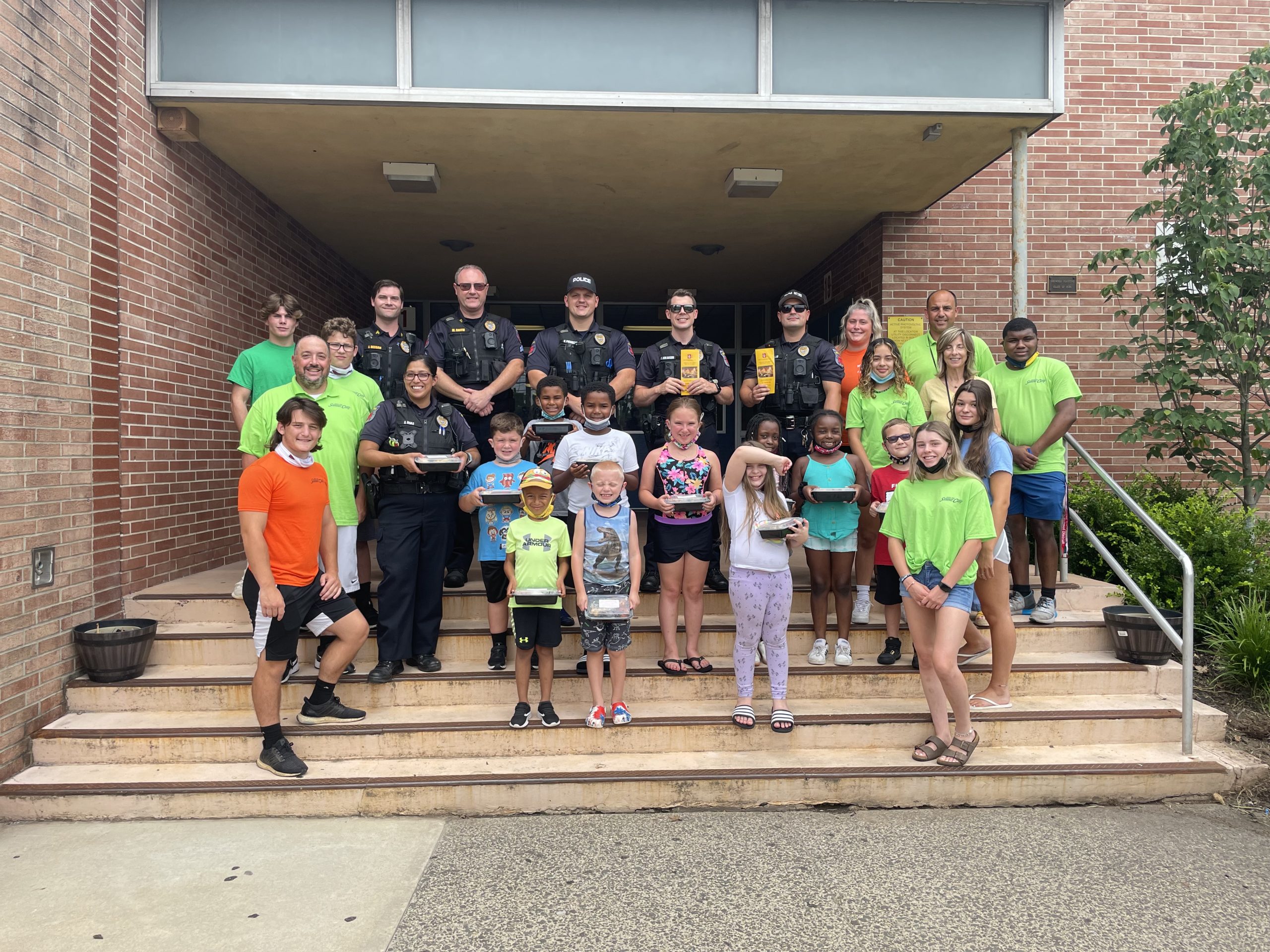 With the extra food, Local 27 members visited a children’s summer camp to distribute food for children to take home.

“To be able to alleviate their concerns about getting their meals or getting an extra meal was a bonus,” Polakoski revealed. “It really helps them out.”

This is exactly what Kenneth DeRoberts, co-founder of Soup Kitchen 411, had in mind when the organization launched FeedNJ, an initiative to curb pandemic-related food insecurity while stimulating local restaurants. FeedNJ is especially helpful to areas where some people may not know where their next meal is coming from.

The program, which facilitates restaurants providing meals and delivering them to people in need, hits all the markers of a noteworthy cause. It serves as an antidote to many of the pandemic-created struggles, from combating food scarcity to helping restaurants that are struggling to providing an opportunity for law enforcement officers to serve their communities.

DeRoberts, who started the charity in 2015, saw the detrimental effects the pandemic had on local businesses and residents alike. He knew he had to use his organization to aid those grappling with the consequences of COVID.

“It’s just gut-wrenching,” DeRoberts noted. “Seeing the lines around the country at soup kitchens, food banks and food pantries. We wanted to do something.”

So the organization applied for the Sustain and Serve NJ grant from the Economic Development Administration (NJEDA) and received the maximum amount of $2 million. Then DeRoberts had the idea to get the NJSPBA involved with the initiative.

“I thought it would be natural for PBA Locals to distribute meals to their communities,” DeRoberts explained. “And the restaurants absolutely love this program. And it took NJSPBA President Pat Colligan about a nanosecond to jump at the opportunity.”

Colligan sent a mass email to all PBA Locals to garner interest and participants. Fifteen Locals responded to the call, including Deal Local 101, Linden Local 42, Madison Boro Local 92, Ewing Township Local 111, Point Pleasant Boro Local 158 and Roselle Park Local 27. Colligan says this is yet another way for officers to show their excellence in community policing. 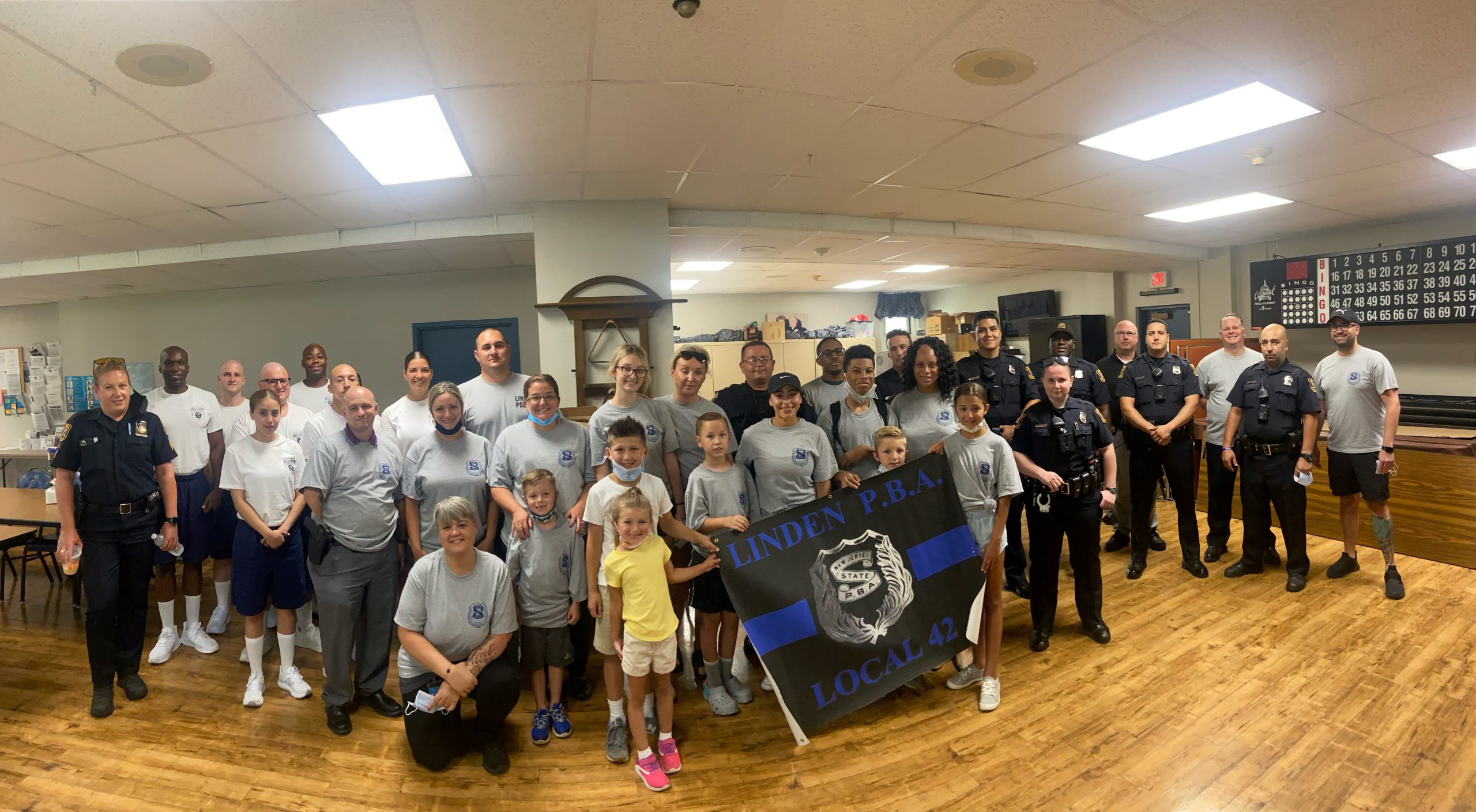 “Community policing is a bedrock of building safer, stronger communities,” Colligan told reporters. “Our local PBAs are honored to help those who are still hungry in our communities during these very difficult times.”

The program has been a success, to say the least. By the end of July, the nonprofit had bought more than 250,000 meals from local restaurants. Participating Locals delivered meals to community centers and food pantries, and restaurants like Bella Gina were able to bring back pre-pandemic staff and offer extra hours, thanks to FeedNJ.

From Linden Local 42, 30 members broke up in teams to visit seniors at the Linden housing authority buildings, Ann J. Ferguson Towers, Edward J. Murawski Towers and John T. Gregorio Towers. Local 42 State Delegate Anthony Matusawicz even had his wife come out to help, while other members also brought their spouses and kids.

“I didn’t think the turnout was going to be that big,” Matusawicz revealed. “So I figured I need extra hands just in case nobody shows up. But a lot of people showed up.” 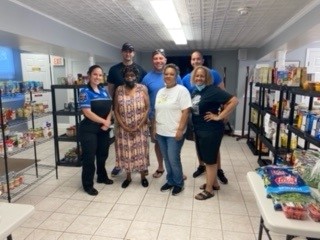 Madison Boro Local 92 members delivered 200 meals, half hot and half cold, to the First Baptist Church.

The members and volunteers knocked on every resident’s door to hand-deliver more than 400 lunch meals, half of which were cold and half hot, from Bella Gina’s Italian Restaurant.

“Some of them had tears to their eyes,” said Anthony Matusawicz, the Local 42 state delegate. “It a good feeling to give back. I think the people involved enjoyed it and would like to see this happen more often.”

Other Locals had a similar experience. Madison Boro Local 92 member Stephanie Aquino, who works in community policing, wanted to deliver meals to the First Baptist Church, where the Local’s food pantry is. She reached out to Reverend Dunn, the chaplain for Madison PD, to organize the giveaway.

The Local delivered and set up 200 meals at the church, half cold and half hot. The hot meals included sausage and peppers, and the cold meals included a cold-cuts sandwich. The meals also came with a garden salad and chips.

“They were all gone,” Aquino noted. “Reverend Dunn could not believe it. They had a huge turnout.”

Aquino says that her love of community outreach and helping people in need propelled her to want to take charge of the event, but the most rewarding part was feeling connected to these residents and local businesses.

“Now they know us by name,” Aquino relayed. “Getting involved in something like this, not only does it make everyone feel good, like, ‘Wow, we just did something awesome. Families have food because of us,’ but it also makes us connected and more of a community. It makes your job easier when you do outreach like this.” 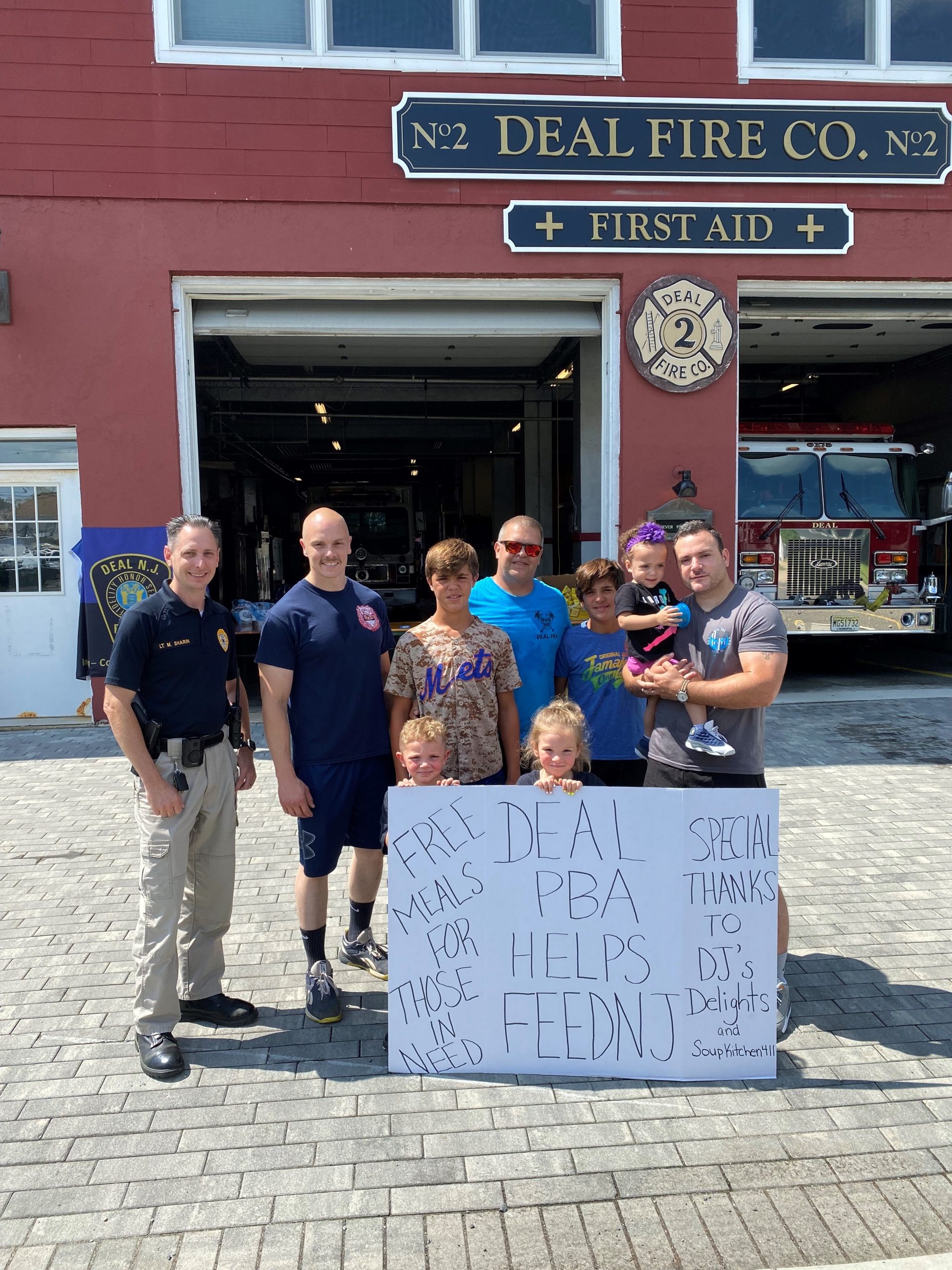 Deal Local 101 members distributed meals in the community and at a local homeless shelter.

Meanwhile, Ewing Township Local 111 State Delegate Alex Maldonado and board members Ricardo Sookhu and Melvin Jumper reached out to Ewing Helping Hands for a list of families who were most in need of a meal. They delivered 15 meals from Chicken Holiday to four families with children in Ewing.

“It was like a complete surprise,” Maldonado noted. “They didn’t know they were getting the meals. They were so happy.”

Maldonado reiterated how this is the kind of event that the Local wants to participate in to show that they want to be out in the community helping people.

“We’re trying to build a better relationship within the community,” Maldonado explained. “If [Soup Kitchen 411] is able to continue doing it, we’ll be more than happy to keep assisting families in Ewing Township.”

Point Pleasant Boro Local 158 distributed 100 meals to members of the Panthers Let’s Eat Organization, which aims to donate healthy meals to students and families when school is not in session.

Maldonado may get what he wants. DeRoberts says that the collaboration with the PBA has been so incredible that he plans to continue working with Locals to feed the hungry. In fact, the organization has already applied for round two of the NJEDA Sustain and Serve NJ program and is hoping to receive the maximum grant once again.

For the next round, DeRoberts plans to meet with Colligan and Pete Stilianessis, the president of the NJ State Troopers Non-Commissioned Officers Association, to distribute meals into the communities. And this time, he may bring a new element of surprise to expand the program.

“I really like getting the PBA involved and getting into the community,” DeRoberts exclaimed. “And we’re going to add a wrinkle into it that’s going to really blow this up even bigger. It’ll be really cool.”