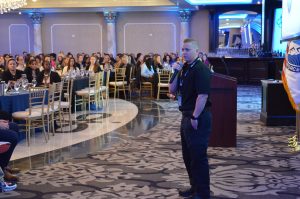 Morristown Police Officer Connor Manion, the first openly transgender police officer in New Jersey, speaks to the NJWLE conference attendees about “Standing Up and Standing Out.”

Whenever Mercer County Prosecutors Office Local 339 member Megan Flanagan is en route to a police-related training, she has a recurring thought: “I could be the only female there today.”

Conference and Awards Ceremony on May 17 at the Grand Marquis in Old Bridge.

“I literally had to take a moment for myself,” Flanagan said. “I looked around the room, and it’s something I’ve never seen or been to in 18 years of law enforcement.”

Flanagan was referring to the way the more than 500 participants in attendance filled the meeting room, as well as the representation of 135 agencies, 46 vendors and 26 sponsors.

“There was so much energy in the room,” she continued. “And it was just something I, me, personally never have experienced.”

A nonprofit for nearly two decades, NJWLE consists of active and retired officers who are working together to strengthen public recognition of the successes and unique contributions of women in the profession of law enforcement. The organization prides itself on inclusivity and is open to men as well as women. 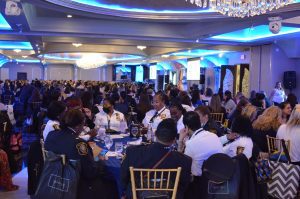 More than 500 people attended the NJWLE 16th Annual Leadership Training Conference and Awards Ceremony on May 17 at the Grand Marquis in Old Bridge.

“We wanted to come in with a warrior mindset, with a sense of resilience at this conference and really approach a whole bunch of topics for females that were going to attend,” explained Heather Glogolich, vice president of NJWLE and a Morris Township Local 133 member.

Like Flanagan, Glogolich was equally astonished — more like “blown away,” she said — by the attendance at the conference.

“I was humbled,” Glogolich continued. “I was just in a state of awe that so many were there and that they craved the kind of training that we were giving them.”

In planning the conference, the board members wanted to encapsulate a variety of relatable topics for their sisters in blue that examined how they can achieve the mindset of resiliency. For example, Glogolich revealed her firsthand experience of surviving a domestic violence incident off duty involving her ex-husband.

“I just wanted to talk about how as officers, we have to put up this blanket when we come to work and hold in all the stuff that we go through on a personal level,” she commented. “We really need to lead with grace and patience in everything we do, because you never know what somebody’s going through.”

Glogolich’s vulnerability resulted in a flurry of outreach from other women who shared their own accounts of personal domestic violence or domestic sexual assault. And it confirmed the underlying objective of the conference to provide education and motivation to take care of their own people.

As if on cue, the next featured speaker, Jenna Romano, a licensed healthcare provider, addressed the mental fitness component for crisis responders. Romano was followed by Dennis Benigno, founder and CEO of Street Cop Training, who spoke on the challenges women face in the role of street cop.

The sessions emphasized the opportunity for female officers to expand their impact on their departments.

“Let’s face it, women come on the job and they can be pigeonholed into that school resource officer position or community policing,” Glogolich submitted. “And there are those officers that are females that want to go out there and want to get after it … the drug arrest … the DWIs.”

Captain Tom Rizzo with the Howell Police Department took the dais next and emphasized the foundational basis of law enforcement: leadership.

“When we talk about leadership, we think about rank,” Glogolich said. “Leadership starts Day 1 that you choose to take on this position. Because no matter what, you’re a servant leader to the community. It is all about being a warrior. It’s about coming through in every situation and being the best version of yourself and fighting to stay that way.” 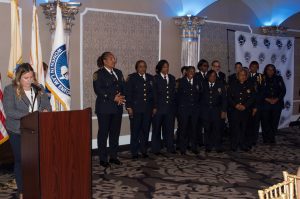 Members from East Orange Local 16 were recognized with the Department Achievement in Public Safety award for 2019.

While the room surged with female empowerment, the conference also addressed the trans community.

Enter Connor Manion, who, upon being hired at the Morristown Police Department, was recognized as female. The Local 43 member is the first openly transgender police officer in New Jersey. He, too, took to the podium and addressed the theme of “Standing Up and Standing Out.”

“He knows what it’s like to be a female on the job but then was brave enough to transition into who he felt his true self was,” noted Flanagan. “And that was a man.”

One particular quote from Manion resonated with all 500 people in the room, Flanagan said, including her husband: “It’s hard enough just being yourself on this job, let alone if you’re not.”

In switching gears, Flanagan drew attention to national statistics regarding the low percentage —13 percent — of women participating in law enforcement. The participation at the 16th annual conference, however, told another story.

After a full day of seminars, the conference culminated with the awards ceremony. The Officer of the Year award honors the first female police officer in New Jersey to be killed in the line of duty: Abigail Pellett.

Pellett was from the Plainfield Police Department, and her daughter comes back every year to give the award. The state’s chief’s association used to bestow an award named for Pellett but turned it over to NJWLE as something that would best serve New Jersey’s women in law enforcement.