Anticipation of the 2023 NJSPBA Collective Bargaining Seminar began bubbling about a month before the Feb. 7-9 confab. Specifically, some up-and-coming members who will be attending their first seminar expressed eagerness and optimism about the virtues that await at Collective Bargaining this year.

Colts Neck Local 333 State Delegate Joe Zoppi exuded anticipation about what the seminar will yield in his first sitting. Having been elected State Delegate in June, Zoppi has heard that all the information needed to know to administer the contract Local 333 just settled is there at Collective Bargaining, and how to apply that information.

“Just what is the town going to think if we present X, Y and Z and that kind of stuff,” Zoppi explains when looking ahead to what he wants to learn at the seminar. He has a goal in mind that most of the 500-plus attendees this year more than likely share.

“Well, knowledge is power,” Zoppi adds. “Any type of knowledge that you have can help you in the long run.”

The coming of age swelling in the NJSPBA apparently will add further impetus to the Collective Bargaining Seminar. Certainly, members coming back for the fifth, sixth, 10th or more time know there is powerful knowledge to be gained for contract negotiation, contract administration and career protection and security.

But the increasing influx of younger members in Locals creates an attraction to the seminar that hits the core of its foundation. Younger members will learn how to put themselves in a positive position when they sit down at the negotiating table.

“They will get the experience of learning how to jump into the ring,” submits NJSPBA Collective Bargaining Chair Artie Cronk, the Manchester Township Local 246 State Delegate. “So if they have a question about anything that has to do with their contract, they’re understanding as much of it as possible.”

So the seminar might elevate to more impact than ever before because members like East Windsor Local 191 State Delegate Joe Zucchero will be attending. Coming to his second Collective Bargaining, Zucchero notes that even though he has six years on, there are 24 in his 42-person department who have come on after him.

And even though Local 191 has been without a contract since 2020 and negotiations continue, Zucchero has additional expectations for what the seminar will provide.

“The members who are very young, other than coming to work for the 12 hours, they don’t really know all the intricacies of what goes on behind the scenes,” he details. “Like the whole IA process in today’s day and age and because you’re in the spotlight 24-7. Or healthcare benefits. It’s up to us to take it back to these members.”

Jack Massaro has been the Little Silver Local 359 State Delegate for just about six months, and with his first contract negotiation coming up, he is hoping to get some insight at the seminar that will help him get a good deal for the members. Local 359 also has several new members, so Massaro is coming to his first seminar with the eyes-wide-open perspective many attendees will share and that should give this year’s Collective Bargaining great energy.

“Everyone gives me a lot of hope that it’s going to be great, and we’re really going to learn a lot,” Massaro reports. “I’m sure we’re going to be sitting there like, ‘Oh, that’s a good idea.’ And all these terms that I don’t really know because I haven’t been on too long, we can learn and master so that when we go into negotiations, we know exactly what we’re talking about.” 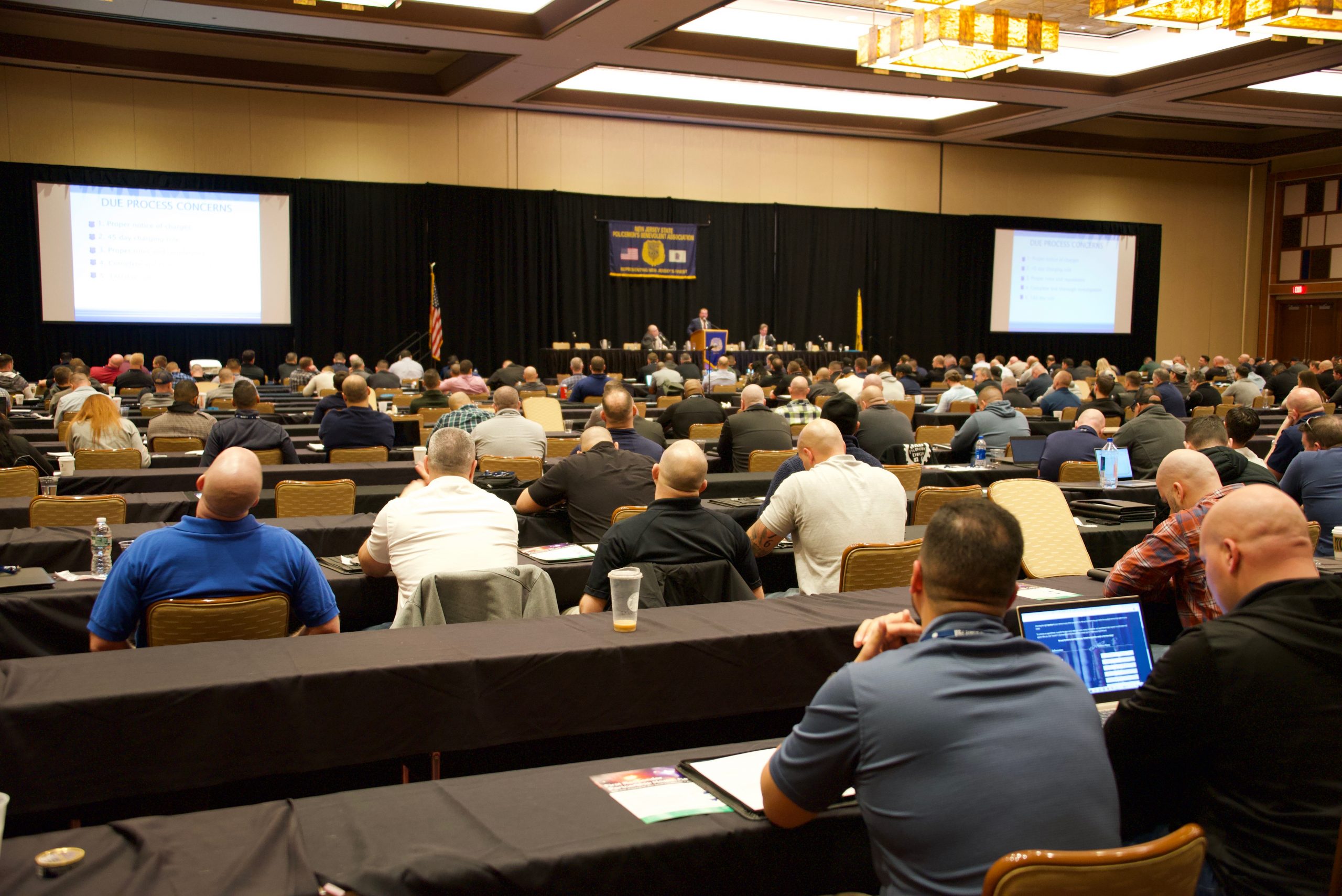 Cronk assures that the seminar will include the evolution of contract negotiations, new laws affecting labor relations, healthcare changes, IA policies and what new members need to understand. But the move of the venue this year to the Tropicana Atlantic City won’t be the only aspect of the 2023 seminar that will be refreshing.

“We are trying to make it so our members are informed, but also encouraged,” Freeman specifies. “We like to put out the message that they’re doing their job well and that, as individuals, each of them does the job right.”

Toward that end, one of the upgrades will be coming from noted attorney Frank Crivelli of Crivelli, Barbati & DeRose, LLC. A JAG officer when he was in the Marine Corps, Crivelli has developed career-long expertise regarding the use of force and rules of engagement, and he will present on a topic which members really need at this time.

The seminar will also include the latest and greatest legal update about sick-leave gaps that have swept across the state. This will examine responses from various employers so members can work within the rules and will be incentivized to go to work rather than have to use their sick time because they will lose it if they don’t take it.

Another response to the influx of young officers and the increasing number of female officers coming on the job has also led Freeman to ask attorney Lori Dvorak of Dvorak & Associates to provide a block of instruction about the Family Medical Leave Act. And Peter Paris of Beckett & Paris will reprise his “Me-First Policing” presentation, which offers members much-needed information about how to protect themselves from the pitfalls out there waiting to trap them.

Additionally, Freeman reminds that Stuart Alterman & Associates promises some memorable theater supplementing its officers’ rights presentation. This, along with presentations by the state’s best labor attorneys and other experts, will equip members to deal with department administrations that are changing, be on top of terms and conditions of employment and promote communication so Locals don’t come across as greedy, needy or angry.

And as the seminar addresses the latest trends and information, Freeman hopes that will generate the greatest discussions.

“I hope we have a huge Q&A, because there’s going to be a lot of information put out there,” Freeman continues. “Members might think their question is too private, silly or mundane to ask in front of the group. But the fact is, there is no question like that. I guarantee you that if there’s a question in Atlantic County, it’s also happening in Middlesex, Camden or Bergen counties.”

Many members might be looking at Collective Bargaining like West Essex Local 81 State Delegate Matt Carleo is. Having been State Delegate for about six months, he anticipates three days of information overload at his first seminar.

But Carleo does not hesitate to confirm that knowing there’s a lot he doesn’t know coming in will lead to making the most of this year’s seminar.

“I think the biggest thing for us is to be able to talk to our mayor, council and borough,” Carleo comments. “Being able to learn how to talk their language properly in order to have a good dialogue.”