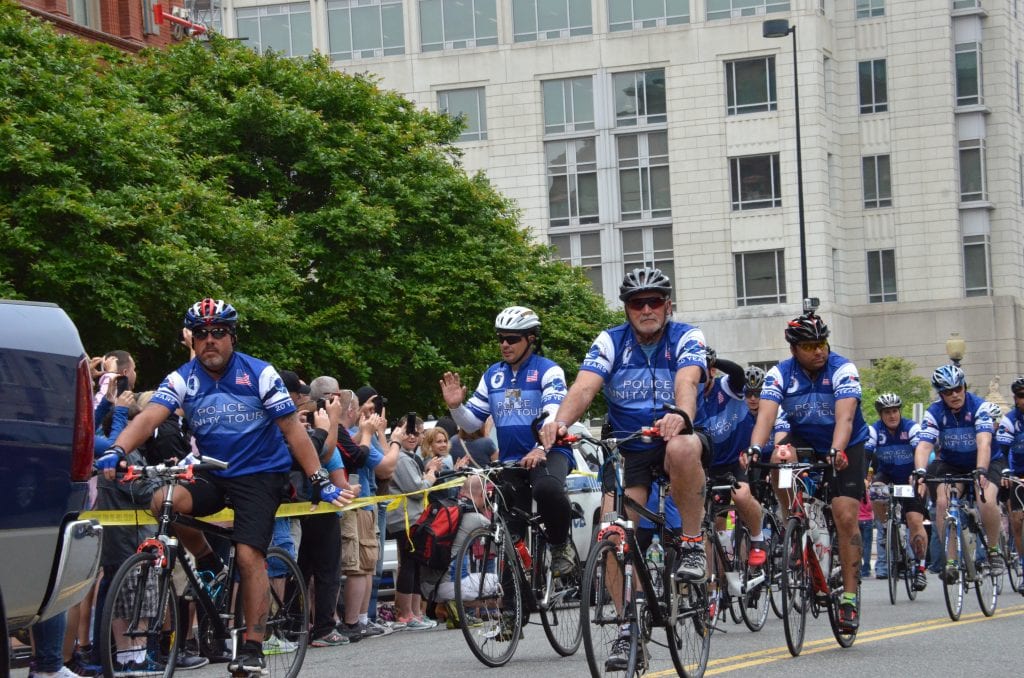 Second in a series celebrating 25 years of the Police Unity Tour. Join us as we roll through great moments from the road with the officers who ride nearly 300 miles every year to fundraise for the National Law Enforcement Officers Memorial.

The ride became a movement.

After the successful first year of the Police Unity Tour in 1997, founder Pat Montoure and Police Unity Tour Executive Director Harry Phillips decided to reprise the ride. So in summer 1997, the two bicycle cops headed to the NJ State PBA headquarters in Woodbridge to meet with President Michael Madonna and Executive Vice President Anthony Wieners.

They described the transformative journey they had just taken with 16 other officers to the National Law Enforcement Officers Memorial in Washington, D.C. They talked about sitting in a bike saddle for 10 hours a day for four days straight. They discussed the 70-degrees-to-40-degrees-in-an-hour change in conditions. They relived the reverence of each officer riding into the memorial. Each day provided its unique set of aches and pains, and each mile was life-changing — that’s how it feels to ride for those who’ve died.

They urged the PBA to get involved, and the PBA excitedly pledged to donate $25,000 to jump-start the tour for its second year.

“We got the PBA behind us, and that helped an awful lot,” Phillips recalled about expanding the tour to 37 riders in its second year. “It just kind of grew. We went to 50, which we thought was crazy — Oh God, 50 people, how are we going to keep them under control? — but we did it. And it just kind of grew from there.”

Manchester Local 246 State Delegate Artie Cronk, who serves as the national delegate for Central New Jersey Chapter 10, is rolling into his 14th tour this year. When he rides, his mind recounts his fallen brothers and sisters.

“The motivation itself is the person or the people you’re riding for who would give anything to be in your shoes,” Cronk explained. “There’s no excuse why I can’t go ride because I’m tired and my body hurts and I don’t feel good, because the person I’m riding for would give anything to be here and doing this right now. That’s the only motivation I need.”

Motivation comes from many sources when you’re riding nearly 300 miles for four consecutive days. What’s that journey like? Hear from some of the PBA members who make the trek from New Jersey to Washington, D.C., every year. 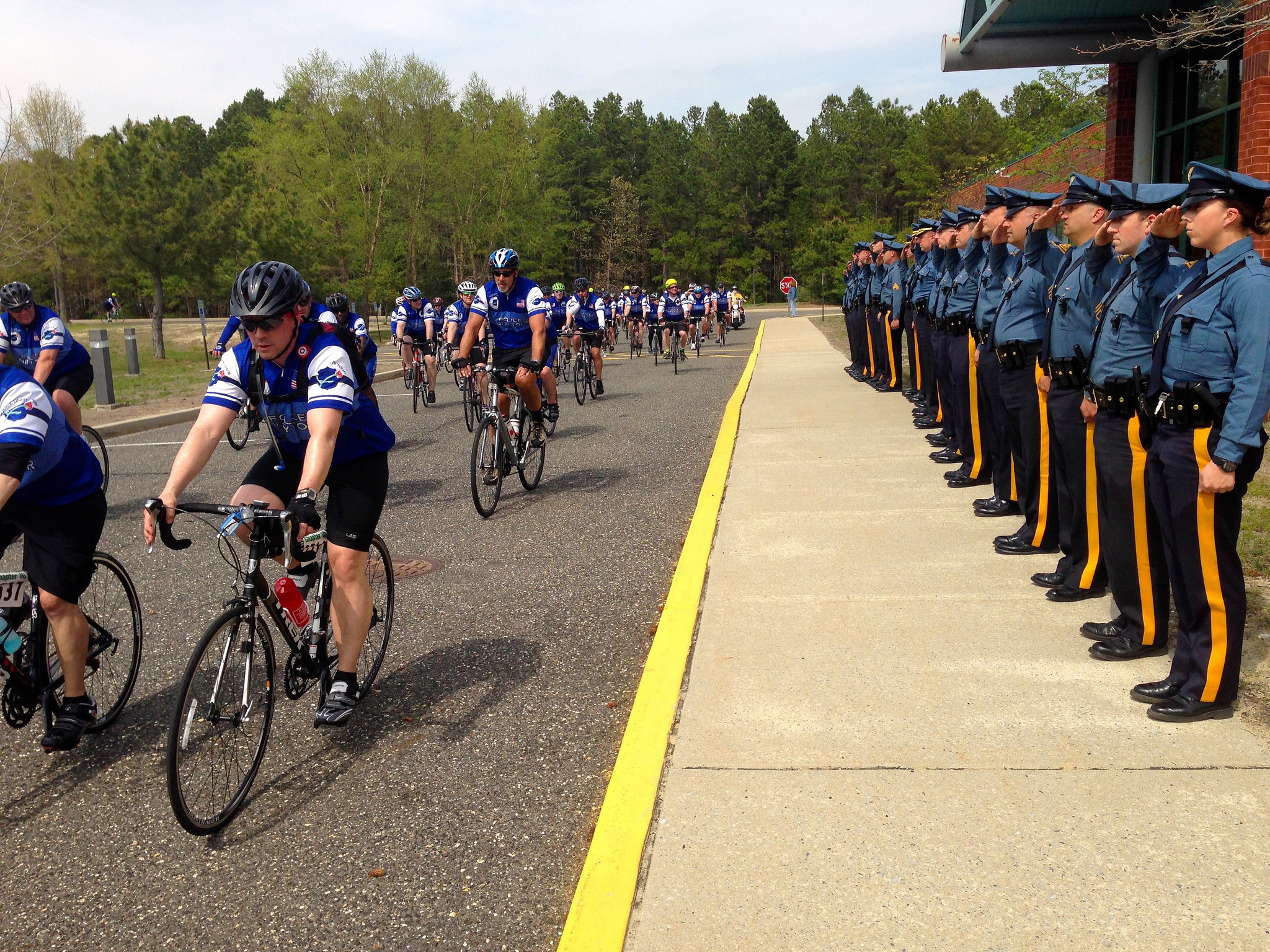 Riders with Northern New Jersey Chapter I typically enjoy a mild May morning in Florham Park the first day. Garden State C.O.P.S. President John Ciuppa, vice president of flagship Chapter I, might be losing his mind just a little bit on Day One. As part of the support team, he organizes and transports four days’ worth of luggage for hundreds of riders.

Every year, he sees out-of-state friends grinning, laughing and enjoying themselves and feels relief in being reunited.

“You make friends from all over the country,” Ciuppa affirmed. “You just don’t realize how important it is to still have those connections and have those friends. That’s what the tour does.”

In central Jersey, with Chapter 10, Lawrence Township Local 119 State Delegate Chris DiMeglio also loves to be in the group of 600 people and chat with friends he hasn’t seen since the previous Unity Tour.

DiMeglio feels cool and reassured as a seasoned rider with eight tours under his belt. Even standing at that starting line with nearly 300 miles in front of him, he knows that Biofreeze, a water-resistant windbreaker and rain covers for his shoes will help him through the toughest conditions.

“There hasn’t been a year that I’ve not done some sort of preparation,” DiMeglio shared about cycling. “I’m always trying to keep ready. I’ve never put myself in a situation where I knew I didn’t train.”

When they take off, DiMeglio watches the newest riders pedaling to get to the front of the group. He keeps a steady pace in the middle of the pack to conserve energy.

Come 6 p.m., he’ll be able to get a few hours of rest. For now, the first day is about reconnecting with friends and staying focused on the marathon ahead as they pedal through New Jersey.

“I’ve just learned that if you put in the time [to prepare] then you can accomplish it and really, really enjoy it more,” DiMeglio advised. “I bike and I talk with people. I have a conversation and a whole 15-mile leg passes. And you won’t even realize you did it.” 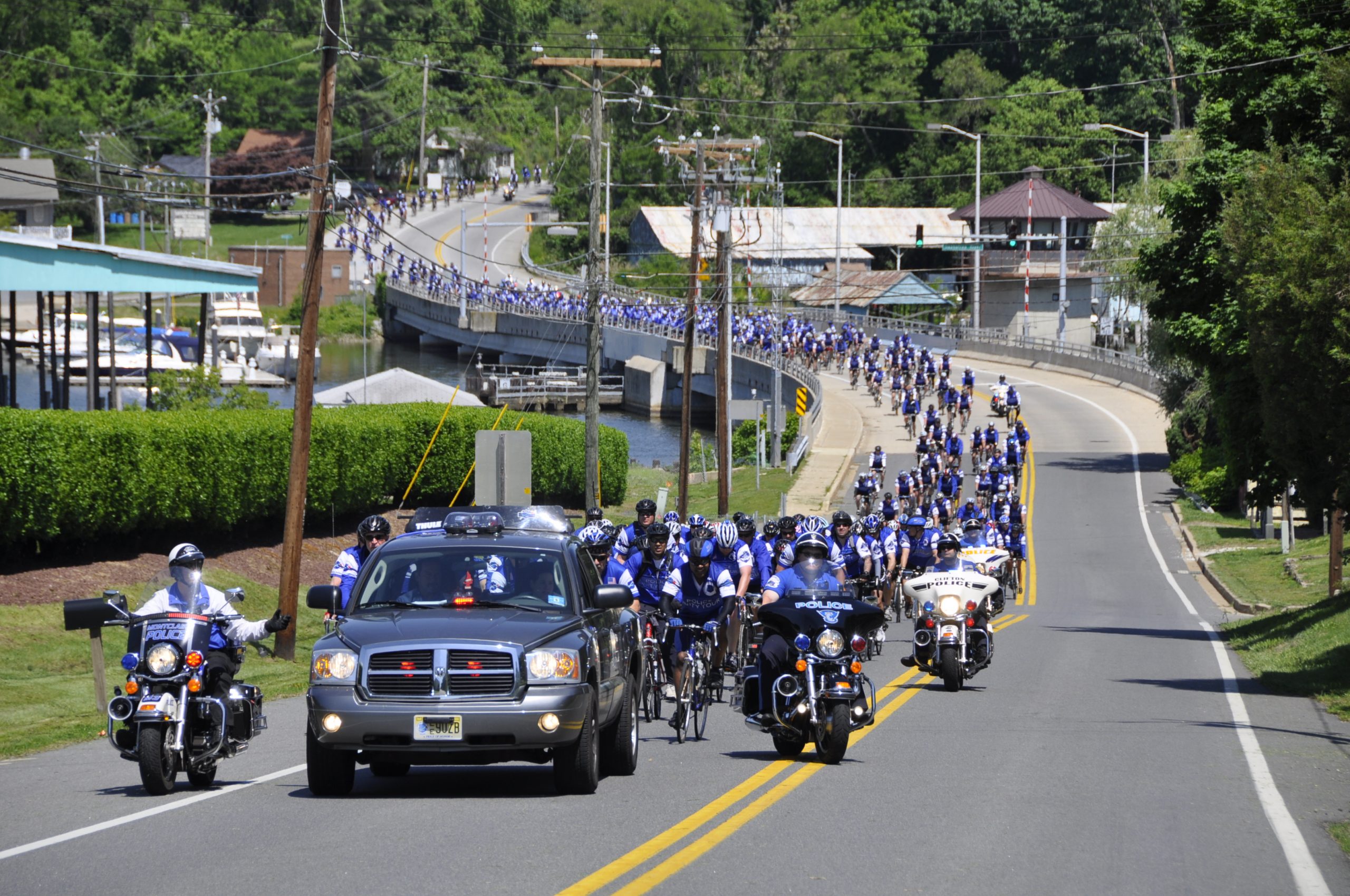 At any point during the four days of the Unity Tour, a thin blue line of bikes, motorcycles and a vital support team stretches out in a powerful image.

A wake-up call of 5 a.m. typically rouses riders on the second day of the tour. They grab a quick hotel breakfast and pump up their wheels.

Retired Ewing Township Local 111 State Delegate Mike Pellegrino, who is preparing for his 20th tour this year, says a challenging aspect of the second morning is fighting through the soreness and dwindling adrenaline of the initial day.

“The second day doesn’t feel like the longest ride in the world, but it’s definitely one you have to prepare for,” Pellegrino expressed. “It’s one that you have to get loose for to get started. Forty-seven years old is different than 25 years, so it takes me a little bit more to get ramped up, but it’s all within a mindset.”

Chapter 10 kicks off Day Two with a route from Somerset to Delaware. Northern California Chapter XIII has joined Chapter 10 the past few years, and Gil Curtis, a 31-year law enforcement officer retired from the LA Police Department, leads the group.

He’s experienced rides through Philadelphia with driving rain and lightning taking down trees. When storms happen, Curtis gets on the walkie-talkie to plan safety precautions.

“You’re talking hundreds of officers, where to put up in a safe environment,” he explained. “The weather back East is challenging in that it just rains at the drop of a hat.”

Curtis knows that with two more full days to go, remembering the reason for the ride is key.

“It’s a life-changing experience,” he shared. “[Riders] are willing to put up with the sacrifice for four days knowing that the person that’s on the wall in Washington, D.C., would give anything to have just 30 seconds back of their life.” 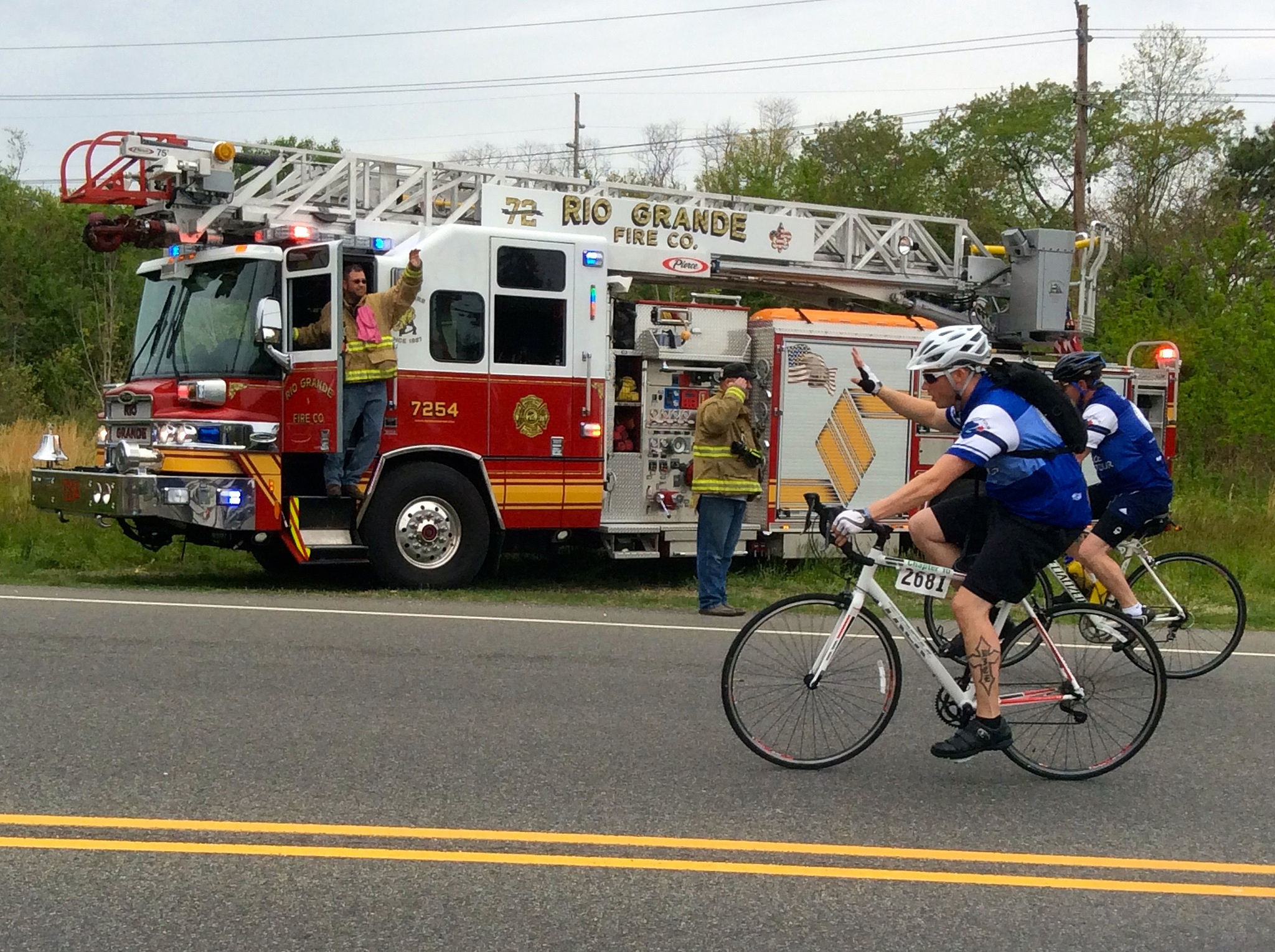 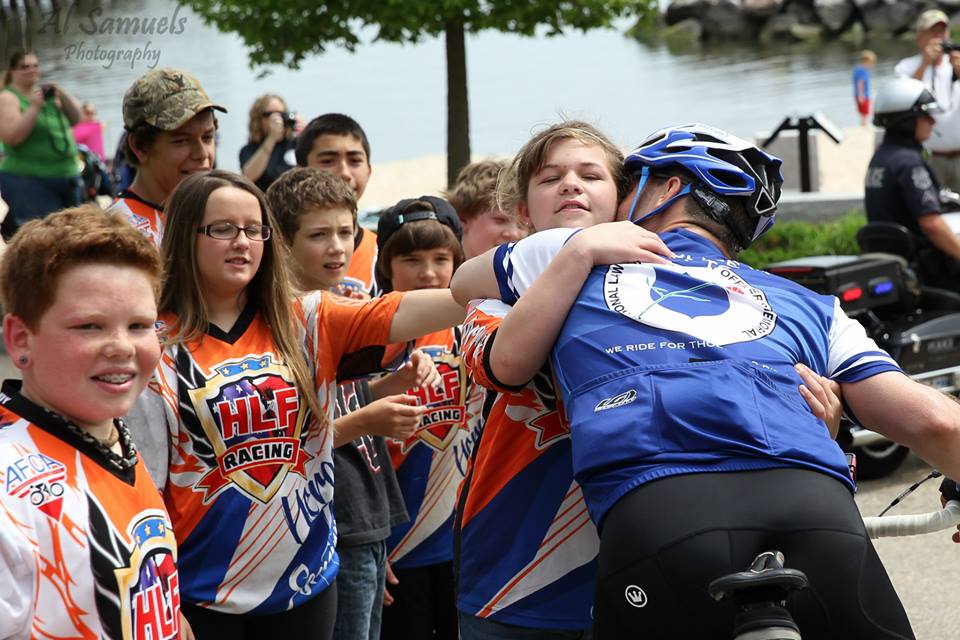 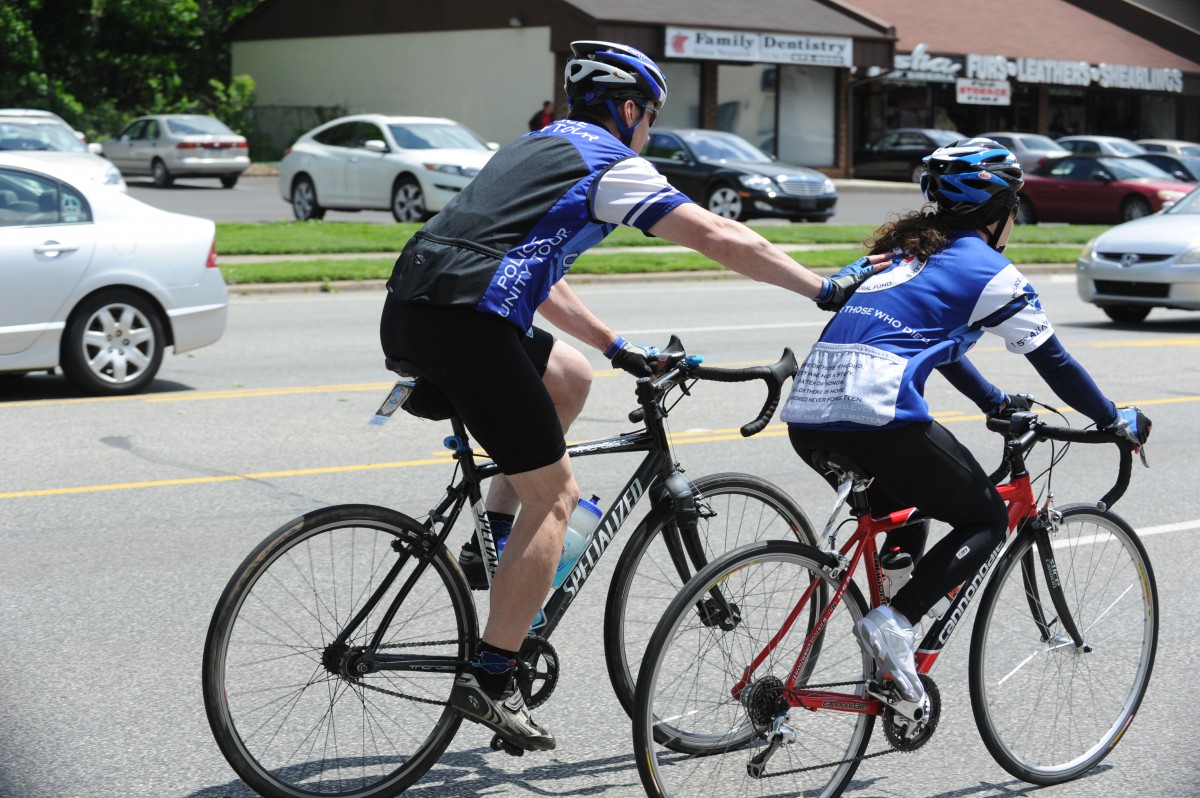 Throughout the four days, officers receive encouragement from crowds along the route and other riders to persevere toward their goal of reaching the National Law Enforcement Officers Memorial.

When riding through the farmlands of Maryland, the sun beats down with 95-degree ferocity, and unpleasant animal odors permeate the air. The third day is when limbs start to feel a little heavier, conversations dwindle and riders’ grit gets them through.

It’s also when the Uncrustables come out.

“They are definitely the tour favorites,” DiMeglio laughed about snagging extra helpings of the packaged peanut-butter-and-jelly sandwiches from snack stations. “Everyone hoards those. A bicycle shirt has three pockets in the back, and you will be hard-pressed to find many people that don’t have an Uncrustable shoved in there.”

When the tour makes its way through Baltimore, the riders are usually met with cheering crowds. Sometimes, they ride through schools to children grinning and yelling out to the officers. Lined up in the streets across every state are people warming up the riders for the support they’ll find in Washington, D.C., and motivating them to keep going forward.

“Nine out of 10 people are very supportive,” Ciuppa said. “Even when we block out intersections, they’re very understanding and excited to see us.”

Sometimes on that third day, Pellegrino will fall back just a little bit to watch the line of bikers, motorcyclists and support mustering up hills. The visual representation of the thin blue line stretching across the state — while remembering the reason for the ride — gives him chills, even in the heat.

“That’s pretty powerful,” he affirmed. “It’s a very emotional couple of days. What you’re doing and who you’re doing it for, you can’t take away that purpose. It’s not about where you’re going, it’s about the journey and how you’re going to get there.”

After the 5 a.m. wake-up call, Unity Tour riders log about 10 hours on their bikes for four consecutive days.

They send a message to the people lined up at least half a mile away from the memorial and to the names on the wall: “We did it for you.”

"When we muster up at RFK Stadium and start the descent into the memorial, you choke up,” DiMeglio relayed.

For a moment, the aches melt. Despite the fanfare, 2,000-plus riders experience the exact same life-changing emotions that those 18 pioneers did 25 years ago. On the final day, the day that kicks off Police Week, the riders of the Unity Tour get to rest and look back at the journey.

"If you’re not choked up every year, then I don’t know why you’re doing it,” DiMeglio expressed. “You know, that’s the moment. That’s it. That’s why we do it.”