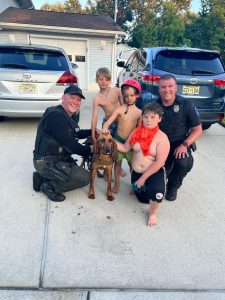 From left, Magnolia Police Department Officer Jeremy Hackney, K-9 Shiloh, Leo, Kai, Jo-Jo and Gloucester County Sheriff’s K-9 Officer Alex Molnar after a two-hour search resulted in the rescue of the boys, who were lost in the woods.

Green brush surrounded a creek in Magnolia Boro that stretched for miles into surrounding towns. Three boys, ages 7 to 9, had adventured along the route, deep into the woods, up and down slopes. After watching renowned YouTuber MrBeast, who posts wilderness survival videos, the group of friends decided to create their own adventure on Aug. 1. So they began their search for frogs and turtles.

But as they followed the twists and turns of the river, which often branched off at points, they eventually found themselves lost. There were no signs of roads or houses anywhere.

In fear of spending the night in the woods, they quickly gathered wet wood and little pieces of brick from the creek bed to build a fire pit. One of the boys sharpened the end of a stick. Their plan? To catch a frog and roast it over a fire for dinner.

For almost two hours, Magnolia Police Department Officer Jeremy Hackney and Gloucester County Sheriff’s K-9 Officer Alex Molnar and his partner, Shiloh, pushed through brush, walked through briars and waded in chest-deep water. They led a massive search party to eventually find the two 9-yearolds and 7-year-old —Kai, Jo-Jo and Leo— and the story of the rescue wound up being chronicled on nearly every local news broadcast.

“These kids were standing there, and they literally look like ‘Lord of the Flies,’” observed Molnar, a member of Gloucester County Local 122. “We find people every once in a while. But this, just for whatever reason, maybe it’s just because it’s three kids, it just grew traction. I was not expecting as much media coverage as it got.”

At approximately 5:30 p.m., Kai and Leo’s grandmother, Cherese Evans, looked out the window and realized the children, who had been riding bicycles together, were gone. She called the Magnolia Police Department. The boys had a strict rule of not going past the block, so she knew something was wrong.

After not being able to locate the children, Magnolia law enforcement officers called in the Camden County Sheriff’s K-9 Unit. Eventually, officers found the boys’ bicycles located at the edge of a section of woods.

And that’s when Molnar and Thomas Accoglio, both Local 122 members, were called in for the search with their bloodhound, Shiloh, who specializes in tracking missing persons. Shiloh sniffed an article of clothing owned by one of the boys, as well as their bicycles, and the officers began their search.

“I grabbed Shiloh and got her out of the car,” Molnar explained. “And then from that point on, we acquired a track.”

Molnar and Hackney, an Intercounties Local 30 member, trudged through the terrain, which ranged from sand to pebbles to broken concrete. After Shiloh tracked the boys’ scent for about 15 minutes, Molnar came across a set of footprints.

The trail led them through mud and up a 60-foot slope, where they grabbed onto branches to pull themselves up. After navigating through briars and sticker bushes, they found a pair of sandals.

Soon they came to 15-foot swamp reeds surrounding them on either side. They were waist-deep in the water.

The officers paused and looked around to evaluate their location, and suddenly they heard something.

Hackney pushed forward, blazing the trail for Molnar and Shiloh. Then, around the bend of the creek, they saw the boys.

Kai, Jo-Jo and Leo stood there barefoot, covered in mud and scrapes, one of them holding their sharpened stick.

“I was ecstatic, and Hackney was freaking happy,” Molnar related. “Because after putting in all that time for K-9 training, it all congealed to a single point in time. And there are the kids, right there.” 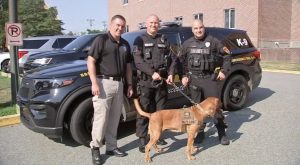 After rescuing the children, Hackney and Molnar had yet another daunting task before them: How were they going to get back to the road?

Communications officers, including Accoglio, were driving parallel to where the search was being conducted, and they began honking their horns and blaring their sirens to draw the officers and the boys in. A group of civilians saw them pushing through the brush and broken logs up the hill toward the road and began shouting down directions to the officers.

When they finally emerged, the officers and boys were covered in cuts, bruises and mud. A group of law enforcement officers, EMS, a fire rescue team, neighbors and the boys’ family members greeted the missing children.

“After a quick evaluation, the kids were good,” Molnar remarked. “And afterward, just because this is an amazing accomplishment, I’m like, ‘Hey kids, I want a picture with you guys.’”

The story of this incredible hour-and-a-half search and rescue gained the attention of the local news media, including NBC, ABC, CBS and Fox affiliates in Philadelphia. Although the
officers were not expecting so much media attention, it certainly added to the celebratory moment.

“I believe this rescue has gotten so much unexpected attention due to just the feel-good moment of the police helping the general public during an emotionally charged situation,” Molnar commented. “The outcomes in similar situations are not always positive. This one was. It also helps that K-9 Shiloh is adorable.”

The rescue, which involved an entire neighborhood, reached a successful outcome because Molnar, Accoglio and Shiloh were ready and able to rise to the challenge.

“Our constant and continual K-9 training, and pushing ourselves during the training, paid off on this deployment,” Molnar added. “My current mantra is, ‘Ignore the noise, focus on your work.’”