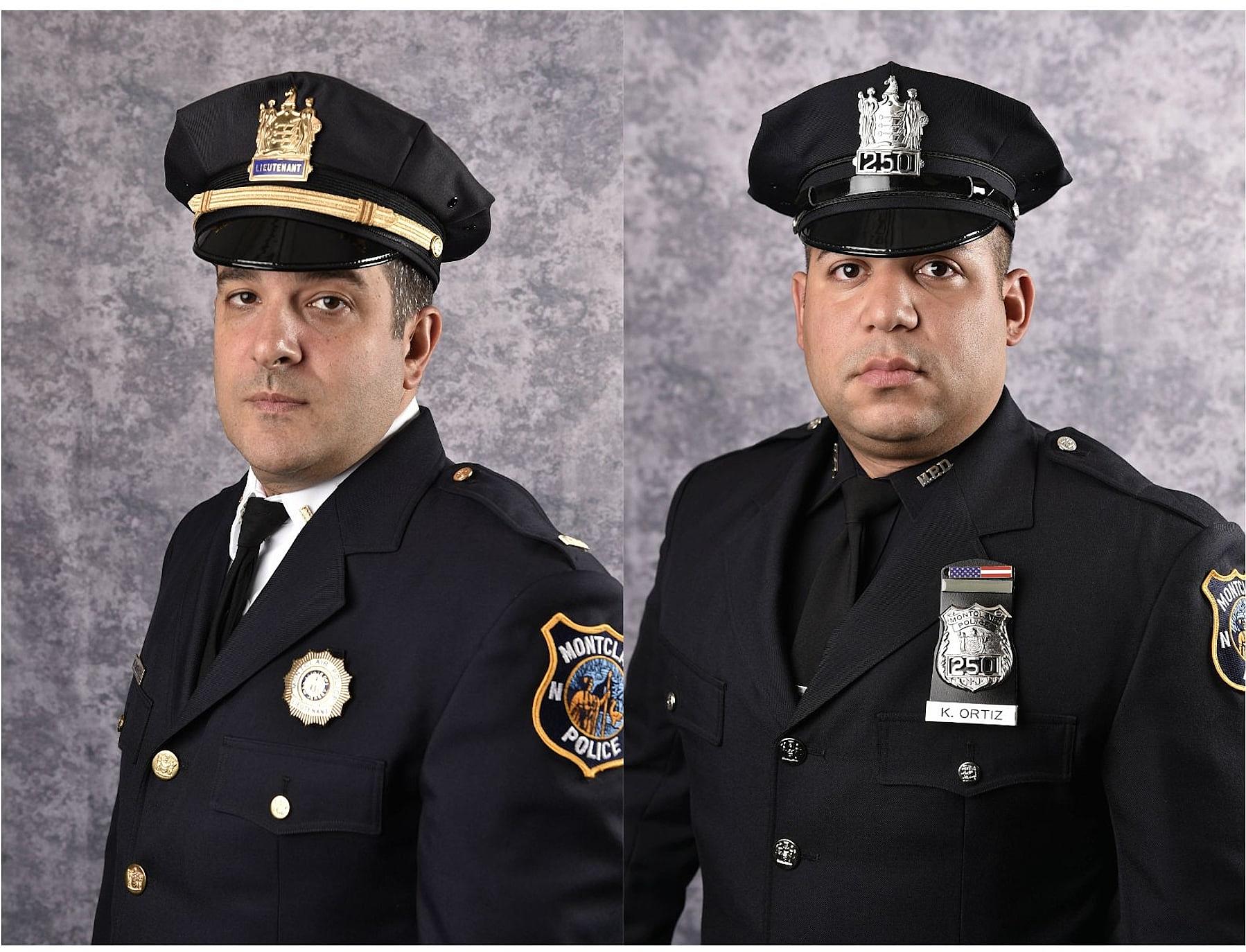 From left, Montclair Local 53 members Michael DeGrazio and Kevin Ortiz worked together to arrest a suspect who held a civilian at gunpoint.

Driving on Stonebridge Road on Nov. 29, 2022, Montclair Local 53 member Michael DeGrazio locked eyes with a man walking near his vehicle. Suddenly, the man looked away and began walking faster. After DeGrazio attempted to follow him, the suspicious man seemed to disappear into the night.

Knowing the area was subject to crime, including a series of robberies around Thanksgiving, DeGrazio persisted. Parking his car, DeGrazio exited the vehicle and hid behind a row of trees to shield himself from sight.

Suddenly, a scream pierced the silence. Seconds later, DeGrazio heard footsteps pounding against the pavement and heavy breathing. It was the same man, and he was now running toward DeGrazio.

“Stop!” ordered DeGrazio, as he stepped from behind the trees.

But the man dodged DeGrazio and kept running.

Suddenly, what looked to be a civilian began running after the suspect. Only moments later, DeGrazio realized it was another Montclair Local 53 member, Kevin Ortiz.

“I was actually thankful, because I tried to give my location for a foot pursuit,” DeGrazio explained, “and I just kept getting stepped on on the radio, so nobody knew where I was. So once I saw Ortiz run out, I was thankful, because at least I knew that someone was there to back me up, because my radio transmissions didn’t go through.”

Without hesitation, Ortiz stepped in and showed his brother he had his back — even off duty.

While hanging Christmas lights for the upcoming holidays, Ortiz had heard the call over the police radio, and then he heard yelling. It caught his attention. Glancing around to see where the noise was coming from, Ortiz saw someone dressed in a black ski mask and all-black clothing running toward him. That’s when he realized DeGrazio was chasing the person.

Off duty, Ortiz had been doing work around the house in shorts and a T-shirt, with no shoes on. But that didn’t stop him from responding when he saw a fellow officer needed help.

Cutting in front of DeGrazio, Ortiz began running, too.

After passing about 10 houses, they ended up in a backyard. The suspect turned around, pointing a firearm at Ortiz. In a quick swoop, Ortiz struck the man’s arm, and the firearm fell to the ground.

“It was all immediate,” Ortiz recalled. “It didn’t really sink in that there was a gun, a real, loaded gun, until after crime scene came and they took custody of it, and they said they had to clear it and unload it [because the] safety was off. Then it sinks in like, ‘Oh, man.’”

When DeGrazio arrived on scene, Ortiz was on the ground to subdue the suspect. DeGrazio stepped in and, after an intense struggle, handcuffed the assailant. That’s when he saw he handgun on the ground only a few feet from Ortiz.

After the arrest, DeGrazio learned the scream he had heard earlier in the night came from a homeowner who was installing security cameras due to the recent break-ins. The suspect had held the resident at gunpoint and demanded his car keys.

DeGrazio commended Ortiz for having his back in a moment when perhaps he needed it most.

“Amongst us, the brotherhood and sisterhood, we still have each other’s backs and still wouldn’t hesitate to back each other up,” DeGrazio related. “It’s just good to know that we’re tight-knit despite everything going on in the world.”

The two Local 53 members expressed their gratitude for the outcome, as no one was injured. And Ortiz affirmed that any other officer would have stepped in.

“I would’ve done it anywhere,” Ortiz added. “And any guy that’s off duty, hanging up his Christmas lights, would’ve done the same thing, whether it’s our town or another town. I’m just glad no one got hurt. Honestly, not even the suspect got hurt, and that’s important. He’ll have his day in court.”