Reelected for a third time, President Pat Colligan and Executive Vice President Marc Kovar and their team have earned an overwhelming for of confidence from NJSPBA members 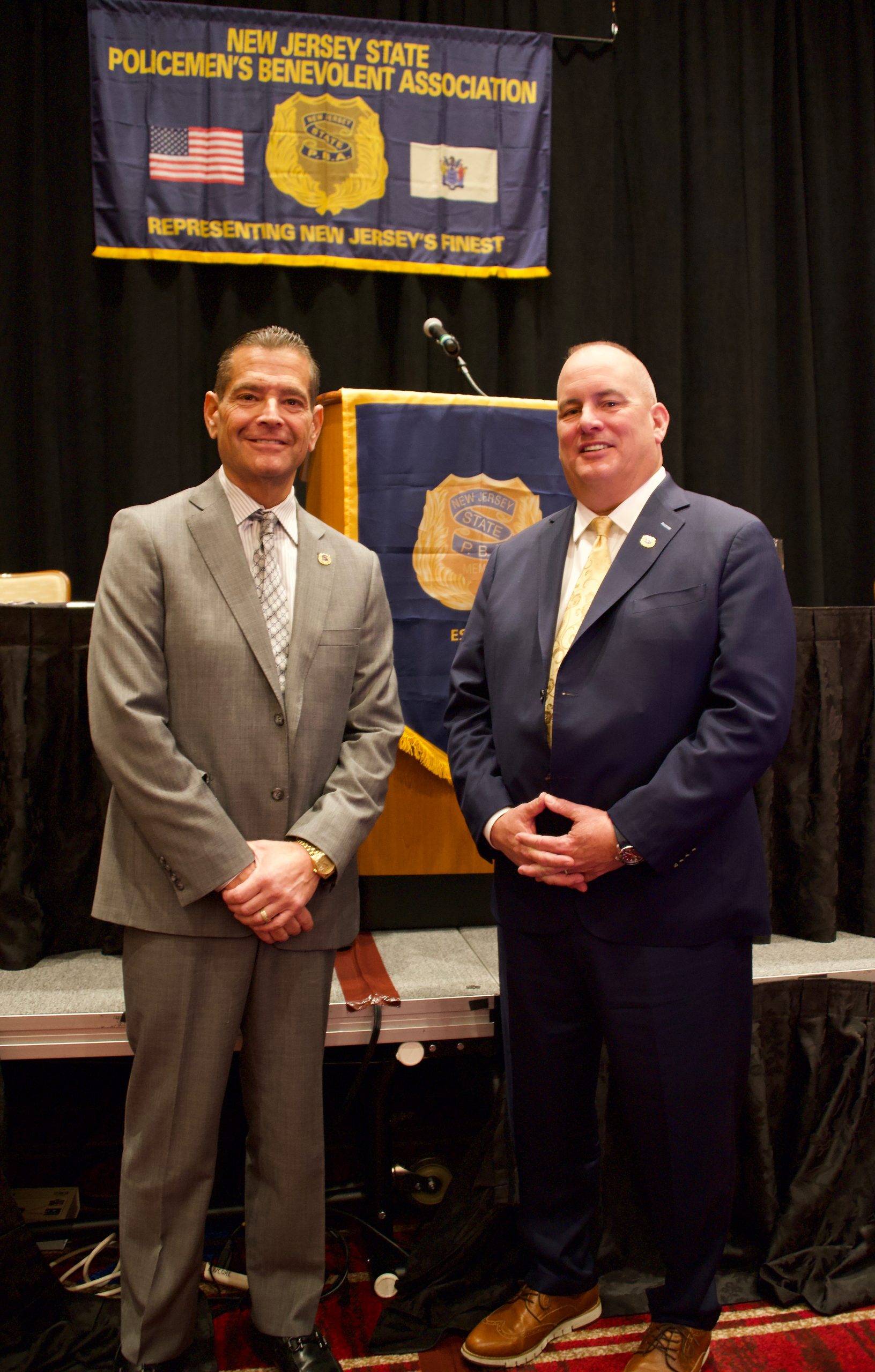 The February NJ State PBA meeting at Harrah’s in Atlantic City finally fell silent. About 90 minutes in, President Pat Colligan opened up the floor to nominations for the election of new officers and board members.

No response. Not a word.

Colligan then asked for any non-incumbent nominations.

Unbelievable for a room full of hundreds of cops.

Then, Springfield Local 76 State Delegate Brian Trotman stepped up to the microphone with the honor to nominate Colligan, Executive Vice President Marc Kovar and all 36 members of the existing executive board for reelection.

The ensuing silence was broken when Colligan asked for a second to Trotman’s motion. At least 10 Locals responded loudly and simultaneously.

A single vote was cast, needed according to the by-laws to confirm reelection for what will be a fourth term for Colligan and Kovar. Really, though, this election really could have been done by acclimation considering how much members are behind their president, executive vice president and board.

“It’s a thankless job, but Pat and Marc definitely have us rolling in the right direction,” Trotman praised. “Their vision for where we are with the pension and everything else they are doing under the sun, that’s why you see that no one even remotely attempted to run against them.”

When telling an elected official that he and Kovar had been reelected six years ago and that they also ran unopposed then, the congressman was impressed and shocked.

“Who would want this job?” Colligan quipped.

Nobody wants this job as long as Pat and Marc are at the helm. And the endorsement at the February meeting could not have been spoken more loudly with the silence when nominations were requested. It was an unspoken statement to be sure about what the members love about their leaders.

“They’re always reaching out,” Trotman continued. “They don’t feel like they’re too good to answer a phone call. No one can ever say that this leadership has ever looked the other way on any topic. And this is the reason why they’re here.”

Don’t think for one minute that Colligan and Kovar will rest on their laurels. They don’t have time. As soon as the meeting ended, a group of members gathered around Kovar. Another group stood in line to speak with Colligan.

The meeting was followed by three days of the PBA’s annual collective bargaining seminar, and neither Colligan or Kovar could hang around for more than a minute without somebody wanting to ask a question or needing help with a problem. This was an extension of the duo’s uncompromisable approach to their jobs: They always, always have time for members.

“There are 24 hours in a day. Are you so busy that or so wrapped in whatever you’re doing to not talk to somebody?” Colligan submitted. “Like what happened when I was walking through the meeting with one of the delegates. It took me three minutes to solve his issue. It’s important to them.”

By the same token, nothing has inspired Kovar more than when a member in need calls. It seems like they are always calling because he is that attentive and accessible, and it’s that opportunity that brought him back for another term.

“The best is when a member comes up and says, ‘You know, you helped me out a year ago when I was in trouble,’” Kovar confided. “If someone’s really down or in trouble, I’ll just basically jump in to help them out. Pat and I have the same work ethic. If somebody calls who was in a critical incident or needs help, we drop everything and get on that.”

One achievement of the Colligan-Kovar administration would never generate many accolades. But they know how important it is. With the swearing in of three new sergeants-at-arms at the February meeting, they have now appointed 33 board members.

Colligan calls it a deep bench. The strength of the PBA under their watch is the members who step up regularly, most of the time without being asked.

“The PBA is not Pat and myself. It’s a great team,” Kovar declared. “It’s hundreds of people. If somebody comes into a meeting and says, “I have an idea,’ we don’t say, ‘Oh no you can’t.’ We’re always looking for new stuff.” 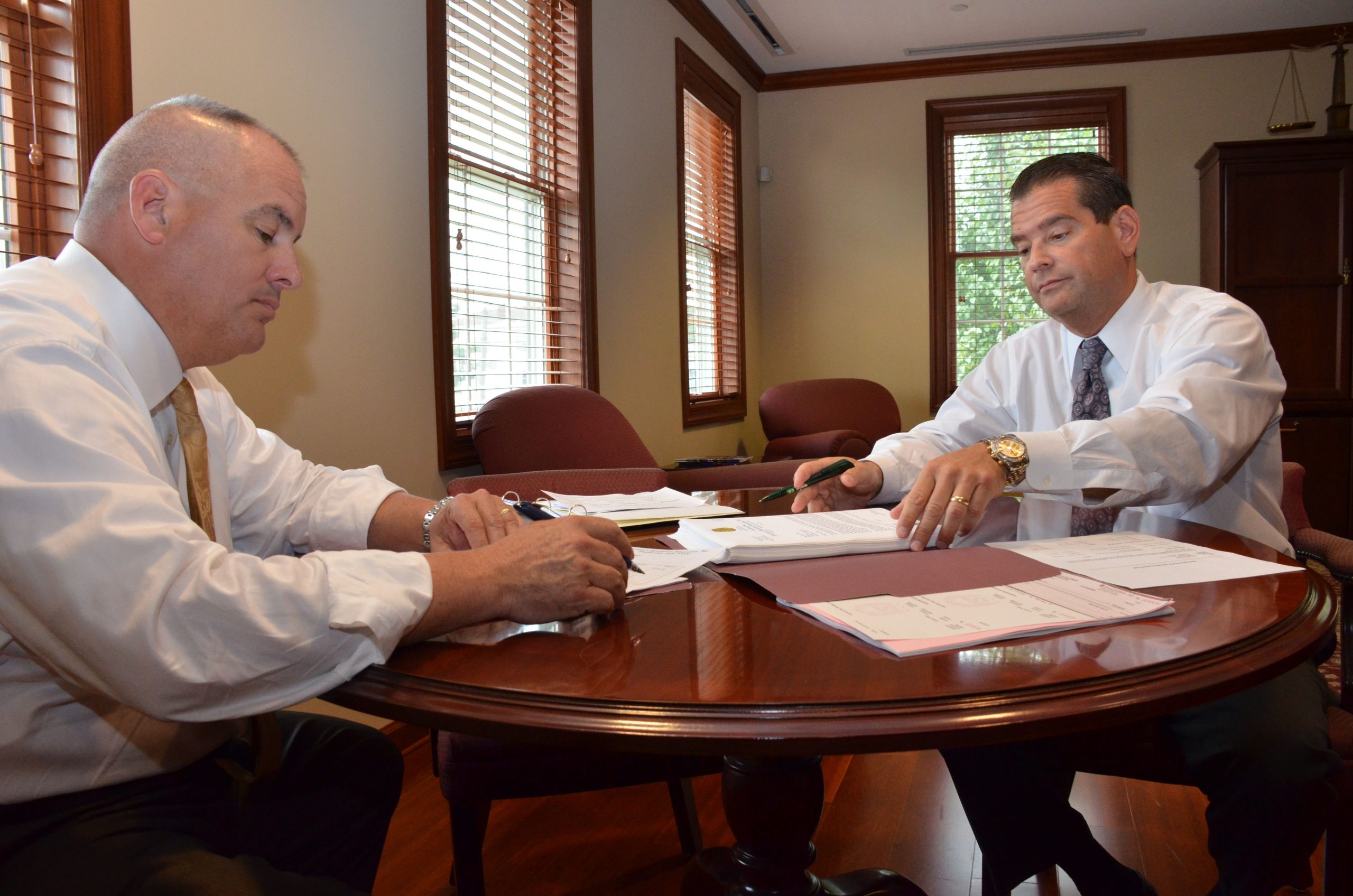 There are many days when Colligan lays awake at 4 a.m., but it’s not because of the members. Perhaps he has grown a couple of inches of thickness to his skin, but there isn’t an excessive amount of complaining coming their way.

“A lot of friends, a lot of delegates I see tell us things like, ‘Keep up the good work,’” Mr. President reported. “That helps because this job is not easy. But we never lose sight of the fact that we’re representing a stadium full of people. And we hope that everybody knows we’re doing the right things and trying to move the association forward.”

If Colligan and Kovar had to campaign for reelection, they would have no shortage of achievements to reference. Just recently, two PBA-sponsored bills were shepherded through the lame duck session of the state legislature and signed by the governor. That almost never happens with any bills. And they could also stand on the numbers of bills they have stopped that would have been detrimental to law enforcement.

Legislatively and otherwise, their proudest, defining and crowning achievement will be taking the Police and Fire Retirement System (PFRS) from the state. The independent PFRS is beginning to flourish, and Colligan acknowledged how it has revealed that the state was not forthright in the way it was running the pension system.

“I have no qualms it will be a prosperous system,” the PBA president reiterated. “I go to these pension seminars across the country, and I see jealousy from other public safety systems going, ‘Wow, how’d you do that?’” 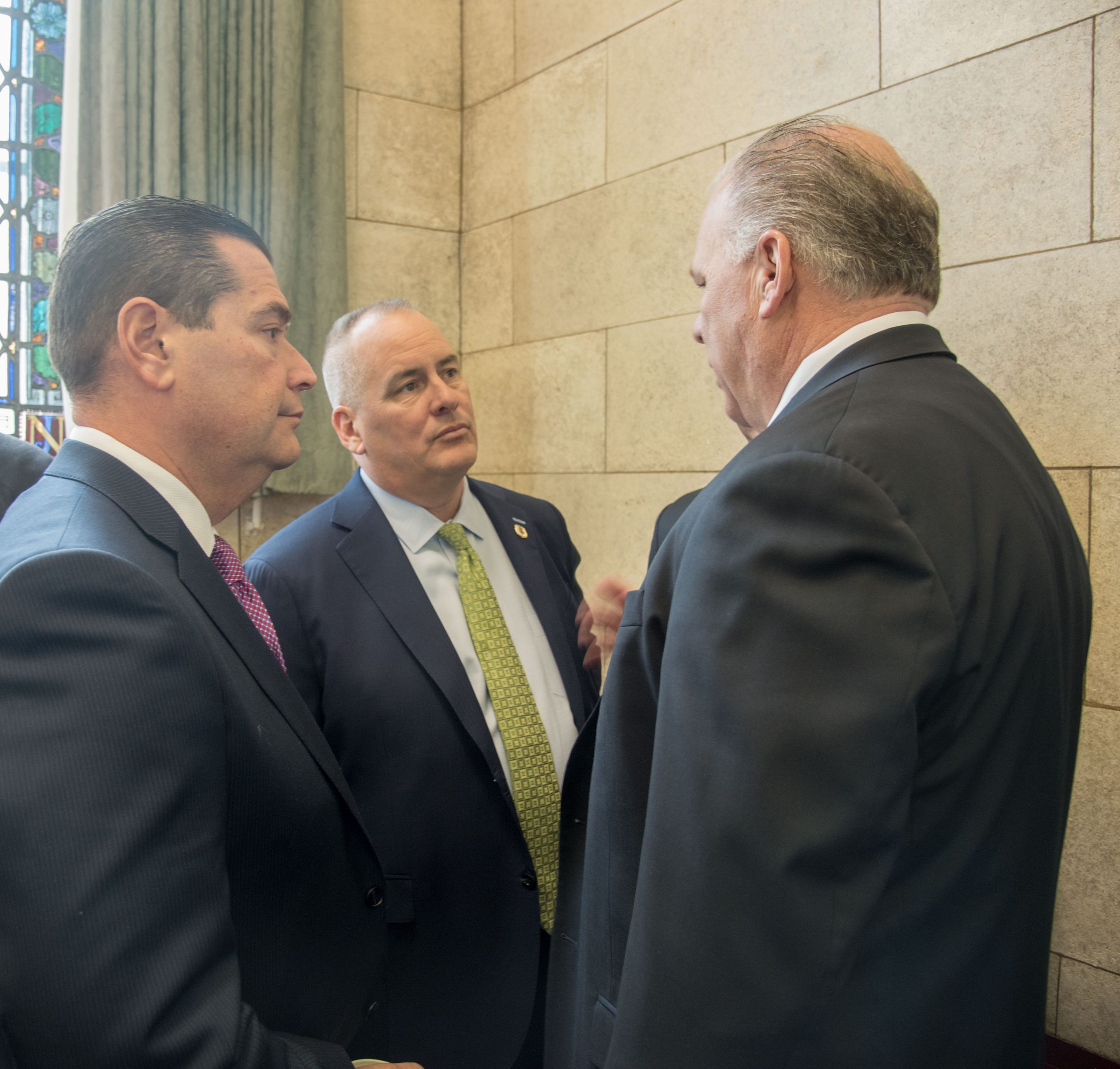 Colligan and Kovar chat with former Senate President Steve Sweeney, one of the many relationships they have forged to help the union achieve so much legislative success the past eight years.

Colligan and Kovar can proudly say they know the names of practically every state legislator. They, as well as the governor, answer when the PBA leaders call.

“Our relationships working with the legislators are showing what we can do,” Kovar noted. “We’re all out there making connections. They can’t all be wins, but our team is working its butt off. And once we stop, that’s when the members should want to get rid of us.”

Not likely to happen because Colligan and Kovar never stop. They both credit their support systems at home to have the energy to keep going out there every day. And so many nights. The only ones who to speak out against reelection at the state meeting might have been Lynette Colligan and Nicole Kovar, except that they know how much their husbands care about each and every member.

Part of that comes from the fact that the president and executive vice president are as motivated handing out turkeys to the homeless at Thanksgiving as they are meeting with legislators. Kovar mentioned how rewarding the benevolent work has been, highlighted by how the NJSPBA Survivor & Welfare Fund has been able to support the families of the many members lost to COVID.

It’s not just the half-million dollars doled out to support the members. It’s the way members and the business community has stepped up to raise that half-million to replenish the fund, culminating with that memorable PBA Cigar Night in May 2021.

With their combined years on the job – they won’t share just how many that is for each – Colligan and Kovar could easily motor toward the sunset. But that won’t happen until, as the president puts it, they can no longer move the ball forward.

The members don’t want that to happen. Hudson County Corrections Officers Local 109 President Derrick James followed Trotman to the microphone and offered a vote of approval by saying, “I am proud no one challenged. It’s a testament that we’re on the right track. That this is the right choice.”

Following those words, James shared his belief that Colligan and Kovar exude common sense, balance and the understanding of politics.

“That’s their secret sauce,” he continued. “They have met the challenge of being the beacon and guiding light for Locals around the state. They know you’re not always going to please everybody, and the minute you make things personal about trying to do so, you’re doomed to fail. That’s why they are an excellent fit to take this union into the future.”