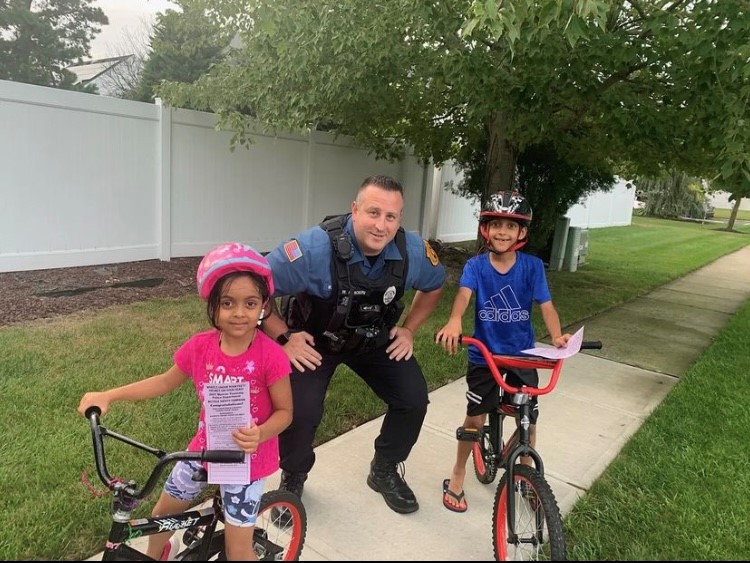 Panckeri, who works patrol in the afternoons, often encounters children riding bikes outdoors. To those who are properly wearing a helmet, he offers a free slice of pizza and a drink, thanks to a new Bicycle Safety Campaign by Monroe Township PD.

The purpose of the program is to increase recreational safety helmets for children while facilitating a positive interaction between law enforcement officers and the community. Panckeri says it’s working.

“It’s definitely making their day,” Panckeri said. “I’ve actually had neighbors look out the window and yell out, ‘That’s awesome.’ ‘We love our police.’”

This is the first Bicycle Safety Campaign from the department in more than a decade. When Chief of Police Michael Biennas wanted to recreate a similar program from another department, Detective Sergeant Ron Breuer and Detective Mark Salemi got to work.

From July to October, officers found children who were wearing helmets and gave them a “summons” — a flyer with a coupon redeemable for free pizza from participating restaurants.

“It’s a fantastic program,” Breuer said. “We want the children to feel comfortable with police, and what better way to interact than to give a free slice of pizza? The kids hear about this, and then maybe they’ll think twice before going out on their bike [without] a helmet.”

Panckeri doesn’t distribute the summons unless the child is wearing the helmet. He only uses it as a positive reinforcement for those who comply and teach others that they can be rewarded as well, so long as they obey the law.

“I think that maybe they got the hint, that there is a reward for wearing it,” Panckeri said. “Then I try to explain to them, ‘Listen, you want to wear your helmet so you can grow up to be big and do whatever you want to do career-wise.’”

The campaign is not only reaching children. Local news outlets have featured the campaign. The department’s social media posts have gained traction from parents and residents, who have been asking officers to drive to their area so that their kids can also receive the positive summons. And Panckeri is on the lookout.

“It’s definitely a positive program,” Panckeri said. “When I’m on patrol and not answering calls for service, I’ve got my eyes open for kids to see if anybody’s around.”