NJSPBA members honored as officers of the month by the NLEOM 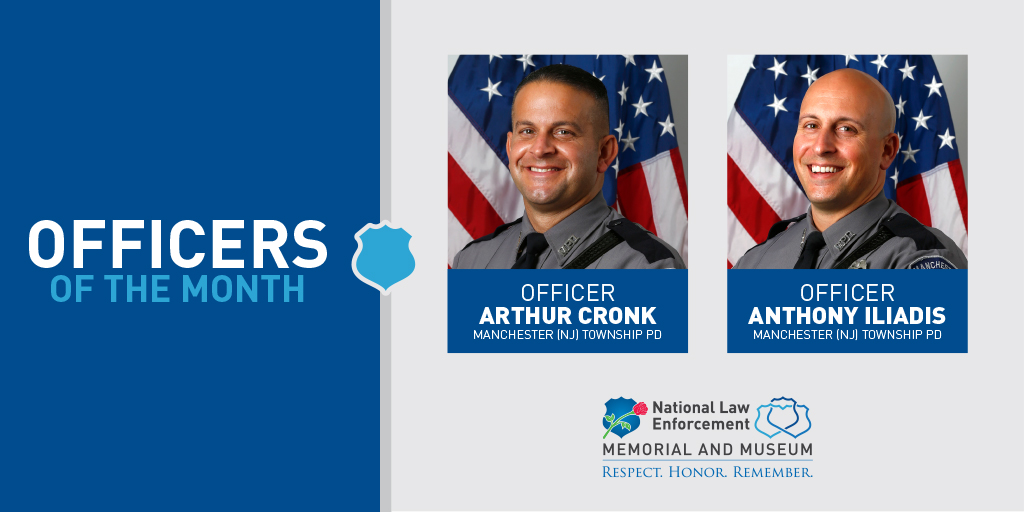 The response by Manchester Township Local 246 Members Artie Cronk and Anthony Iliadis in disarming a knife-wielding woman has become renowned.

For their successful arrest of the woman, who was charged with possession of a weapon as well as possession of a weapon for unlawful purpose and criminal mischief, Cronk and Iliadis gained national recognition. They were honored as the August 2021 officers of the month, awarded by the National Law Enforcement Officers Memorial (NLEOM) and funded by the Police Unity Tour.

“It was very humbling,” Cronk said. “Because that wasn’t anywhere near what some of the other [officers] I know have done that would blow that out of the water.”

Cronk and Iliadis may be too humble to admit it, but their swift response blocked a potentially dangerous situation. It is the same commitment to answer the call that earned Ewing Township Local 111 Member Justin Quinlan the October 2021 officer of the month as well.

Iliadis responded to a call in May 2021 of a woman who stabbed the hood of an occupied vehicle and continued walking while holding a knife. While he tried to engage the suspect in conversation, Cronk, who was off duty, arrived on scene.

The woman did not identify Cronk as a law enforcement officer due to his civilian clothing. As Iliadis continued speaking to the woman, Cronk had the opportunity to approach her from behind and successfully grab the knife from her hand.

Cronk said the most notable aspect of being named a national officer of the month was getting contacted by law enforcement officers outside of the state of New Jersey. He received phone calls and text messages from officers from Northern California who ride with Cronk on the Police Unity Tour. He even received a message from an officer stationed in Florence, Italy, who saw his photo on the NLEOM site.

“That was pretty funny,” Cronk said. “I was like, ‘Oh my God, is this really happening right now?”

Cronk and Iliadis aren’t the only NJSPBA members who received the national honor. In November 2021, Ewing Township Local 111 Member Justin Quinlan was named the NLEOM October 2021 officer of the month for rescuing a woman from severe floodwaters caused by Hurricane Ida. 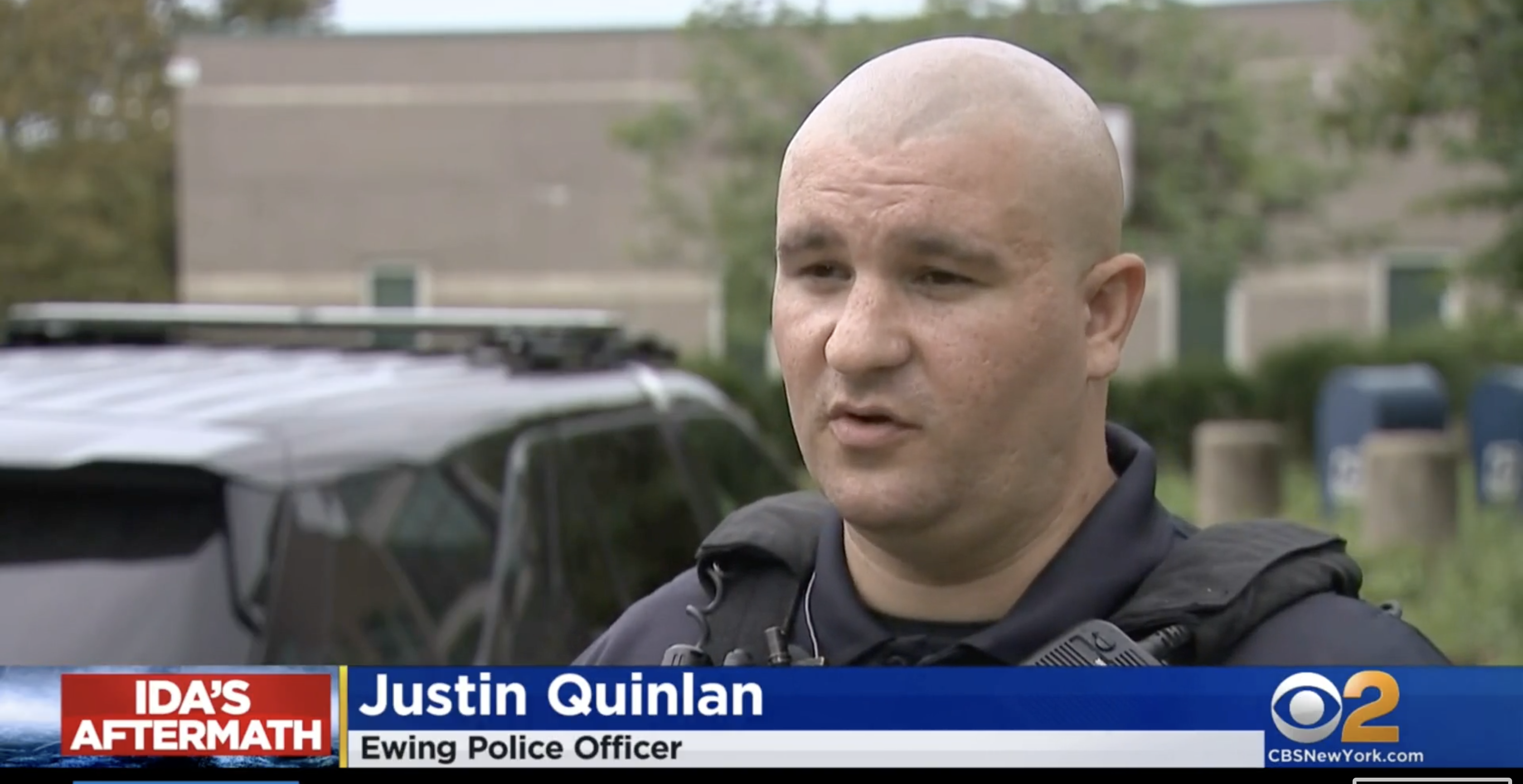 Ewing Township Local 111 Member Justin Quinlan, who was recognized as the NLEOM October 2021 Officer of the Month.

Quinlan, who came on the job with State Corrections in 2012, was monitoring the hurricane’s progress through his police radio from home. When he heard one too many rescue calls, he decided to go into the station and offer an extra hand.

While navigating through the towns and observing road blockages, he spotted a woman dangling from a guardrail. There was so much water that he couldn’t figure out where the curb started and the street ended. But he’d have to act now or never.

“I can’t sit and watch,” Quinlan shared. “Where that creek runs, eventually it would suck her into the woods if she had let go.”

Quinlan shuffled his way through the water, waist-deep at this point, until he reached her.

“She was holding on for dear life,” he explained. “I got her leg up and over the rail, and that gave us a solid foundation to sit on while the water was flowing.”

They held onto the guardrail for 35 minutes before the fire department arrived, but it felt like hours. Quinlan remembers saying prayers with the woman, hoping that they’d be able to safely get home. He would never forget the image of her shivering body and the horror on her face.

“It’s one of those things where you don’t realize what you’re really getting into until you’re in the heat of the moment,” he confided. “You put everything aside and let training kick in. I think about it a lot.”

Quinlan believes he responded exactly the way he should have. He never thought his captain would nominate him for the NLEOM recognition, much less be chosen as the officer of the month.

“I was just completely floored,” he recalled. “You’re part of a group of people who have done some really remarkable things. It’s humbling, to say the least. Because for us, it’s part of the job.”

While none of the NJSPBA members expected to receive any kind of commendation, their courageous actions certainly made them more than deserving of the award. Cronk said he wants more officers getting recognized for going beyond the call.

“I don’t think there’s a cop out there that does things for any sort of glory,” Cronk said. “There’s other things that are way more [praiseworthy.] I’d love to see everybody get some sort of recognition.”