Like an endless sea of blue, more than 200 Old Bridge Local 127 members filed in, one after the other, to the Bury the Hatchet axe-throwing club in Old Bridge on March 26. Their mission was not just to throw axes, but to fundraise for one of their own.

On Thanksgiving night in 2021, members were shaken by the news that Local 127 Officer John Prudhomme was in a car crash. After suffering extensive injuries, Prudhomme is now on a long journey of recovering and hopes to return to work by the end of the year.

Members immediately came alongside Prudhomme to show their support and give a shoulder to lean on. Locals from across New Jersey offered donations. 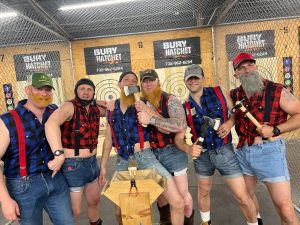 Old Bridge Local 127 members dressed in flannel and fake beards for the fundraiser for one of their own at Bury the Hatchet in Old Bridge.

“We had a lot of support,” Local 127 President Vinny Galgano declared. “A lot of the Locals sent us donations for the officer. And it’s going to help him care for his family and help with whatever needs that they need while he’s healing.”

The fundraiser for Prudhomme was marked successful, and he was filled with gratitude by the support his law enforcement family offered him.

“He was overwhelmed with happiness, and he’s very thankful that the department, and specifically the PBA, has rallied around him during his time of need,” Galgano remarked. “He’s very grateful for the phone calls, the well wishes and the financial support.”

Prudhomme is still on the road to recovery after having a few setbacks with his health. Members are eager to see him return soon.

“We’re one big family,” Galgano added. “We got to look out for each other. And if one of our guys is hurt, we got to rally behind them and make sure that we can do whatever it takes to keep them on their feet and make sure that they get through the difficult time while they’re trying to recover or whatever the circumstance is.”