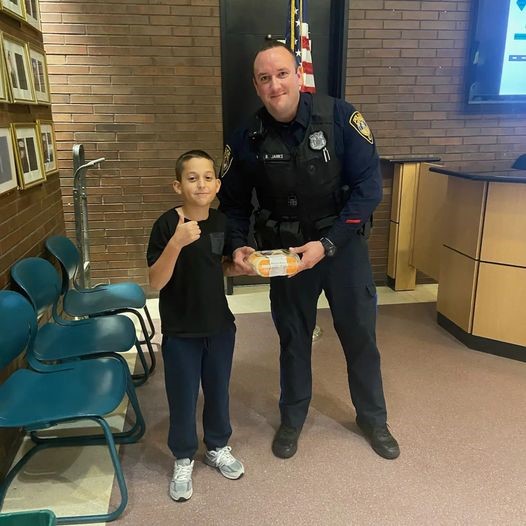 Paying it forward is part of the job of being a law enforcement officer. But it feels even better when a member of the community pays it back.

On Sept. 20, Old Bridge resident Michele Bloom posted on social media about a good deed by Old Bridge Local 127 member Robert Janks. Bloom’s mother was on her way to a dialysis treatment at 6 a.m. when she accidentally hit a curb and got a flat tire.

Luckily, when Janks arrived at the scene, he offered to change the tire himself after learning she was on her way to treatment. Bloom’s sister came to the scene and told Officer Janks he didn’t have to change the tire. They could call AAA instead. Janks’s response was, “We have to get mom to dialysis.”

Bloom’s post got around and inspired one Old Bridge student who was looking to do a good deed.

Eris Nimani, a student at Salk Middle School, was challenged by his teachers to give back to the community in any way possible. Local 127 President Vinny Galgano explained that this has become a regular occurrence in local schools. And while it doesn’t require students thanking local law enforcement, it often turns out that way. 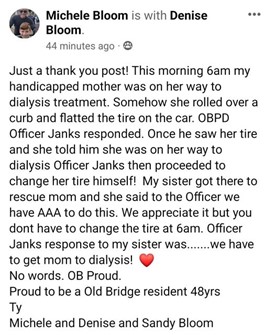 Oct. 14 happened to be one of those pay-it-back moments. Nimani stopped by the police station to bring Janks some cookies.

Changing a tire and bringing over some cookies may seem like small acts
of kindness to some, but Galgano says it has a major impact in how the community views law enforcement.

“It continues to build a trusting relationship with the public…especially with all of the negative things you see on TV,” he said. “It just gives our guys a sense that the public has our back.”