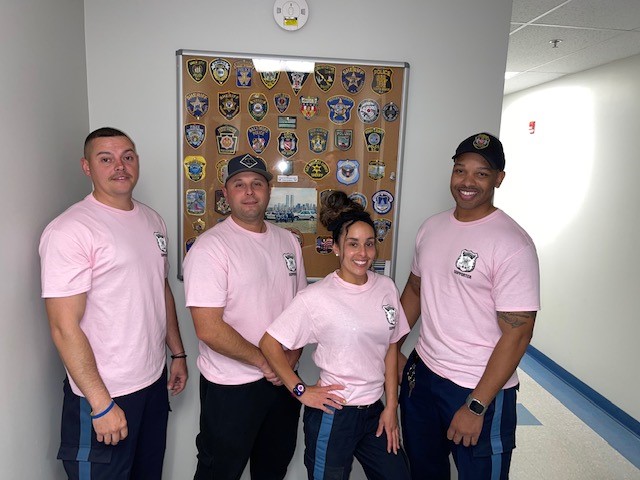 During the month, members wore pink T-shirts underneath their uniforms that featured a gray blue-line flag with a bright pink ribbon on the back and their Local number on the front.

Alahwol has seen tremendous growth in the project as residents of the community became involved in spreading awareness as well. She noted that Local 85 sold more than 200 shirts throughout October, with a portion of the proceeds going to benefit continuing the fight against cancer.

“I think everyone knows how serious breast cancer is, but they also don’t understand how much support there is,” Alahwol related. “So being able to promote it and advertise during October, where there are walks and runs and fundraisers done for the disease, it’s worth it. Every year, it’s worth it. It’s not even about the money, it’s about promoting it. And if someone’s going through it, just guiding them on the resources that are out there.”

While most Locals design pink patches in October to replace the ones that are typically worn on a daily basis, Alahwol found that since Local 85 members do not have outer carriers for their patches, they needed to find another way to display their solidarity. That’s when she had the idea to design the T-shirts.

Since the project began, Alahwol has noticed how significant an impact these T-shirts have made. They trigger the important conversations that allow members to explain why they wear pink and the importance of early detection and treatment. And they encourage the community to spread public awareness alongside members.

“We’re getting lots of feedback,” Alahwol explained. “And the community wants us to let them know [what we’re doing] every year when October comes around, because they’re interested to see what our new design is going to look like.”

Looking forward to next year’s Pink Project, Alahwol has already planned to promote the T-shirts even more than before. Her goal is to continue gaining support throughout North Plainfield and maybe even beyond the local community.

“The project is going well,” Alahwol added. “And I just hope as a community we can continue growing, not just for breast cancer, but for any promotions or any activities and events that are happening on a monthly basis. I hope our department can always be there and be supportive.”