For the past several years, we have had good news to share about the State Health Benefits Plan (SHBP) rates. While for the most part, this is true again for 2022, there is bad news for the early retiree group in county and municipal government.

As we go through these numbers, please understand that national estimates on medical inflation are 6.5 to 7 percent for 2022.

We can start with the State Group (active and retired state employees). For active members in Direct 15, HMO and Tiered Plan (commonly Omnia), your total rates will decrease by 4.8 percent. For those of you who have moved into the new CWA Unity Plans, your rates have increased 4.8 percent. As of the writing of this update, we are not aware of PBA units that have actually migrated into this plan. Ironically, the plan that was supposed to be the savior of the SHBP is now 2.2 percent more expensive than direct 15.

This data shows one of two things: either the other units are benefitting from our lower-cost risk pool, or the executive branch set the original rates for the plan artificially low. 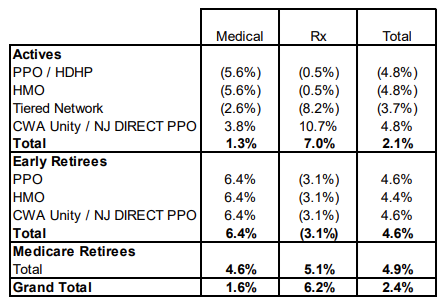 Members in this group have once again done very well, with increases ranging from 1.9 percent to 2.4 percent with Direct 10 and 15 experiencing a 2.3 percent increase, which is very favorable compared to the public sector. 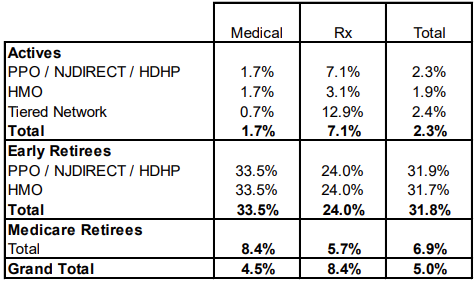 Let me start by saying that in 2018, AON presented that the reserve fund had been growing at a tremendous rate. We knew that this money belonged to the true payors and lobbied that it be returned to the members, towns and municipalities. This was done through short-term rate reductions, resulting in a rate decrease of just under 37 percent in 2019. Since then, that reserve has been exhausted, and there is just no more money to use to subsidize the rates, which will effectively raise 2022 rates 31.8 percent. The commission, which sets the rates, actually reduced the projected reserve to 0.1 months for 2022 in order to smooth the hike as much as possible.

Now before you kill the messenger, we would like to quote from the September 2018  NJ Cops Magazine article on health benefits: “It is important to remember that these rates are a result of events that are one-time occurrences and, without design changes are unsustainable. The assignment of excess funds from the CSR and the lowered experience (which may or may not continue) gave us an adjustment for 2019. National trends range from 4 percent to 10 percent increases,…”

When analyzing the rates over time, you should know that the 2022 rates — even with the increase due to the removal of the CSR subsidy — are lower than they were in 2018, as shown in the graph below.

In fact, the average yearly raise from the beginning of plan year 2013 through the end of 2022 is under 1.6 percent. Now we know this doesn’t put any money in your pocket, but the context has to be solely in the realm of health benefits, and that is what this is meant to explain.

Now what does that mean to you? If you do not contribute to your health benefits or pay a percentage of your pension toward health benefits, it should have no effect on you.

Chapter 330 members have some decisions to make. As you know, Chapter 330 retirees have an arrangement where the state pays 80 percent of the lowest cost managed plan. So for 2022, that baseline is determined off the Horizon HMO 2030. While the rates are not yet out for Chapter 330, my calculations would show that a family in that plan with no members who are Medicare age would go from paying $380.99 to paying $500.78 a month. As members chose plans with higher actuarial value, that cost will increase, to where Direct 10 could go from $850.89 a month to $1,129.06 a month, by my calculations.

Understanding that this is substantial and that most of our members in retirement are in Direct 10 and 15, the harsh effect on your pension checks will most likely make you look for cost savings. As open enrollment is in the near future, I will make sure that we do a plan comparison so you can make decisions that are best for you and your family.

These retirees for the Medicare Advantage population are also suffering a higher than usual raise of 6.9 percent on their premium. This is due to 8.4 percent on medical and a 5.7 percent increase on prescription coverage. These rates are much lower, so the numbers are not as paralyzing, but nonetheless in line with national trends.

What About the Teachers’ Premium Holiday?

What makes this hard-to-swallow early retiree increase even tougher is the fact that the educators just announced that the employees and school districts will not pay premiums in February and will have a premium decrease.

That all sounds great in a press release, but here are the facts:

In 2016, we took bold steps to control costs in the SHBP, and the educators plan did not. This resulted in huge savings for both actives and retirees. These savings are what have kept our premiums lower than theirs to this day. For 2022, the SHBP Direct 10 monthly rate for a family, including prescription, is $2,726.15. The SEHBP monthly premium for 2022 is $2,864.65. To simplify, the SEHBP plan is $138.50 more a month than the SHBP, which is $1,662 more a year (or 5.1 percent more) for the School Employees Direct 10. A one-month holiday would be an 8.33 percent reduction for one year.

This does not take into account the five years that the educators paid more than us before making substantive changes in plan design to restrict abusive and predatory practices from occurring. This whole holiday is the SEHBP giving the members back their own money, ironically in an election year. The educators plan continues to withhold the members’ money from them by maintaining a projected 6.3-month balance of premiums in the bank (the recommended number is 2 months). It is also important to know that retirees up to age 65 were forced into this plan. Their retiree rights were clearly bargained away.

Like the CWA plan, the new educators plan changed payments from a Fair Health index to a Medicare index for out-of-network services. The percentage that they chose (200) sounds good, but it is far lower than the current Fair Health National 90th percentile. This could expose our members to OON providers looking for larger payments from the member. The CWA/Direct 2019 plan rates show that this concept, while possibly feasible in other payment structures, was flawed. The problem with relying on the in-network payment structure is that nobody but the carrier truly knows what it is.

Lastly, in our experience, when new plans are developed the rates are set artificially. They are based on actuarial science, but not always exact. We suspect that the CWA/Direct plan premiums were set too low and that could have been one of the reasons for the almost 10 percent swing between plans this year. We hope their plan is successful and will watch it closely, but until the state demands network transparency from the carriers, we have to tread lightly in this realm. If you would like an example of this, I can show you that the CWA rate initially was set at a number that would have triggered the escalator clause and forced their members to pay more. Remarkably, once labor pushed back, that number was changed to 4.8 percent, which was .2 percent under the 5 percent threshold.

If you are in negotiations, this will be a topic an employer will bring up. The fact of the matter is that local employers got a huge break and the rates are still less than they were in 2018. Did they return any of that to you in negotiations then? Also remind them that any SHBP increases are outside of the cap.