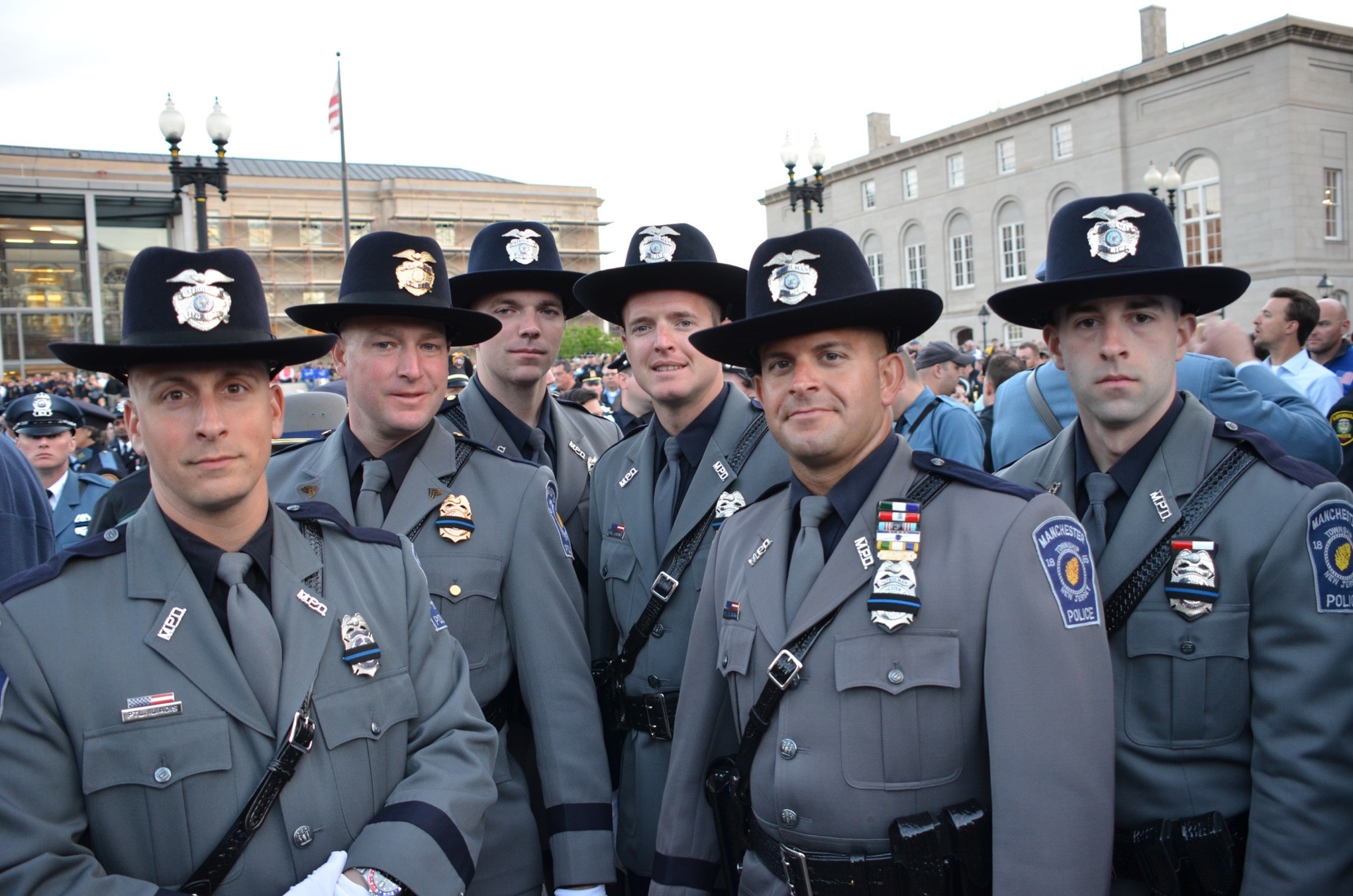 Two minutes was more than enough time for Manchester Township Local 246 members Anthony Iliadis and Artie Cronk to de-escalate a potentially violent confrontation on May 24.

Iliadis was on patrol when he received a call at 12:45 p.m. about a woman with a knife around Cedar Glen Lakes.

He also learned that the woman, Margaret Dennis, 74, had stabbed the hood of an occupied car. He decided the first step would be to speak to the caller.

“‘She just stabbed my car and she kept going,’” Iliadis recalled the caller telling him. “I’m like, ‘Do you know her?’ But she didn’t.”

Just then, Iliadis laid eyes on Dennis. She was walking on the next street over with a 4-inch steak knife in her right hand. That’s when his training kicked in.

“Before you make contact, you call in the location and suspect description,” Iliadis described. “So I do that. And she wasn’t wandering around. She was moving with a purpose.”

Iliadis didn’t know where Dennis was headed, but he knew he had to get her attention. As he followed her down the street, he called out to her, identifying himself as an officer.

“She ignores me at first, but then she turns around,” Iliadis remembered. “My goal was just to address this situation head-on and have her focus on me so that I can hopefully deal with her.”

He tried asking her to drop the knife, but she did not comply. He managed to get her to state her name and where she was going.

“She’s like, ‘I’m going to my sister’s house,’” Iliadis explained. “‘I’m going to do to her what she did to me.’ Clearly she’s not in the right frame of mind, and I asked her a bunch of times to drop the knife. She didn’t, but at least she was talking to me.”

Iliadis knew he had to prevent Dennis from arriving at her destination and potentially harming her sister. He didn’t know it at the time, but help was on the way.

Cronk was en route to a shooting range when he heard the call. Since he was off duty, he was wearing a black shirt and camouflage pants instead of his uniform. When he pulled up to the scene, he slowly approached the confrontation.

“It was just me and [Dennis], and all of the sudden I see Artie,” Iliadis mentioned. “He doesn’t say anything. He’s just standing there. She looks at him but doesn’t think he’s a cop because he’s not wearing a uniform.”

Iliadis and Cronk did not have time to discuss their strategy to defuse the situation, but they didn’t need to. Iliadis acted as a decoy and distracted Dennis by asking her questions, while Cronk advanced toward her.

“He just kind of goes around her,” Iliadis noted. “Then as I’m talking to her, he just grabs her hand, retrieves the knife, and then I move in and grab her other hand. That was it. Boom.”

Dennis was transported to Community Medical Center for treatment and evaluation. The members learned that the woman had been hallucinating and thought her sister was breaking into her house and scratching the furniture. But when Iliadis checked Dennis’ house, there was no evidence of her claims.

“It was all in her mind,” Iliadis clarified. “And they live in the same development, 0.4 miles apart. I mapped it out, and she was two houses away from getting there. If we didn’t get there in time, I think she probably would have hurt her sister.”

The members spoke to Dennis’ sister and learned that the two had not spoken in months and that Dennis had a history of mental breakdowns. Iliadis is thankful he was able to de-escalate the incident and help a woman in crisis.

“We just treat people right from A to Z,” Iliadis described. “That’s been the golden rule. She’s in crisis, and it’s a situation that requires certain attention, but people are people. Just because they have handcuffs on doesn’t mean I have to take advantage of that. Help them and treat them right.”

Iliadis noted that he had just received in-service training with the new attorney general guidelines for use of force. Although the guidelines don’t go into effect until 2022, his department has already been operating that way for a long time.

“My training allowed me to be more comfortable, and I was able to address it with some of the verbal stuff that I’ve always been doing,” Iliadis revealed. “So this isn’t anything new for us as far as de-escalation. For me personally, it’s just the way I like to do business.”

Not only was the training he received crucial in his response, but Iliadis says a major takeaway was the importance of being close with Cronk through their work with the PBA. He is grateful that they know each other well enough to anticipate each other’s moves.

“Artie and I are friends,” Iliadis mentioned. “I’m the president, he’s the delegate. So we’re on the same page. I wasn’t sure what he was doing when he got there, but Artie knew I would talk to [Dennis]. Between the two of us, I knew that we could maybe talk her down.”

The two-minute interaction was captured via the camera in Iliadis’ squad car and posted on the Manchester Police Facebook page. He says it is just another example of what law enforcement officers should be and have been doing every day.

“We didn’t do anything different than anybody else would have done in our shoes,” Iliadis noted. “This is stuff that our brothers and sisters are doing around the country every day.”