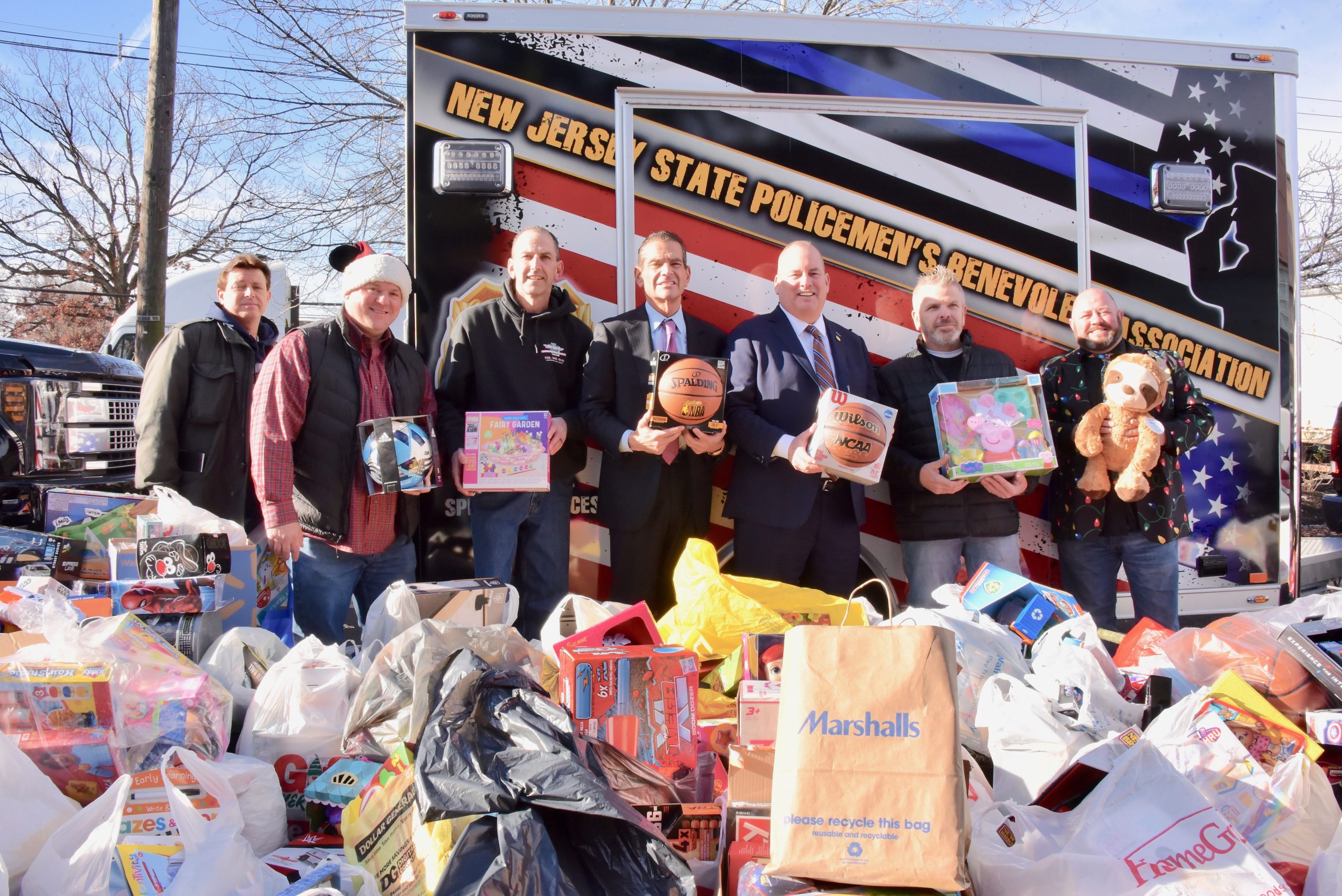 All eyes turned to Dunellen Local 46 State Delegate Joe Dudley. His colorful Christmas-lights blazer and tie were hard to miss in the line of PBA members who gathered on Dec. 7 at Pines Manor in Edison with toys donated by various departments. Joking that he starts preparing for Christmas in September, Dudley certainly sparked the holiday spirit on this sunny Tuesday morning.

And with that spirit, a convoy of trailers from PBA Locals across the state lined up in the parking lot, each filled with stuffed animals, Barbie dolls, sports equipment, bikes, games and so much more to bring to Embrella, an organization that advocates for children in the foster care system. And this year, PBA members were more than willing to bring the kids a Christmas they would never forget.

As members took turns wheeling carts full of gifts to load into the trailers, the PBA Toy Drive looked a little different than in previous years. It was no longer Santa’s workshop, where toys were collected and sorted in the room next to where the PBA holds its monthly meeting. This year, Santa’s sleighs would deliver the toys led by a police escort. 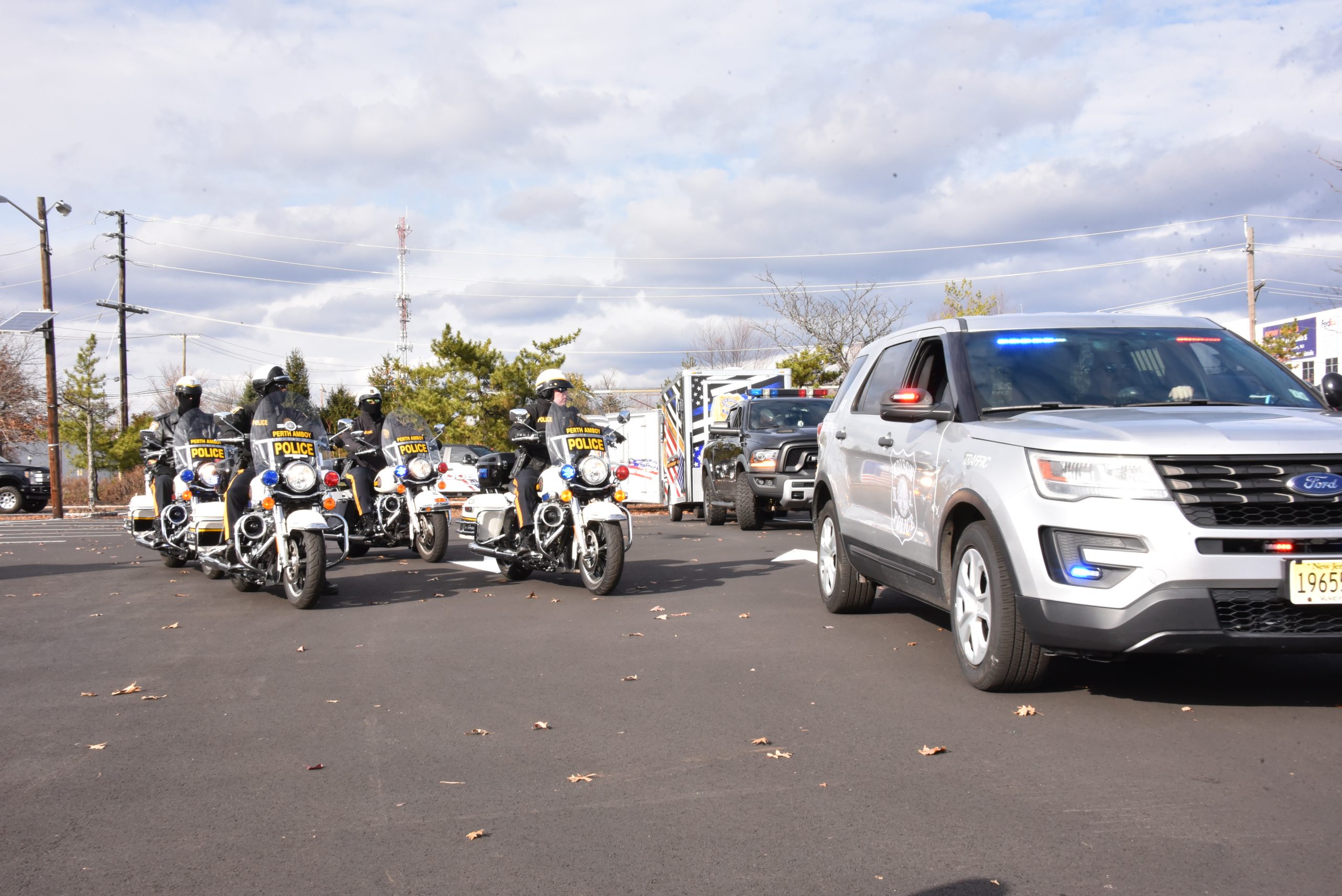 Perth Amboy Local 13 members from the motors unit led a convoy of PBA trailers to deliver toys to Embrella.

For members like Verona Local 72 Officer Alyssa Kirby, donating toys for foster children such as her niece and nephew has become something she looks forward to every year. Kirby advocated for Local 72 to take on the cause of the toy drive, and she decided to match the monetary donation her Local generated to buy toys.

“I think with my Local knowing that my niece and nephew were fostered, obviously feeling what I feel, they were very supportive,” Kirby explained. “And they’ve seen them around, too. They’re always with me.”

Considering the giving spirit, PBA members were excited to reunite for this great cause, especially after Embrella feared it would not be able to receive donations again this year because of the impact of COVID.

Although Embrella representatives could not attend the event, Somerville Local 147 State Delegate Vito Spadea was adamant about continuing the tradition. In his fourth year leading the toy drive, he knew members and their families, along with the community, wanted this chance to give back. Through the years, Spadea has seen the toy drive turn into a bigger operation than ever expected.

This year, the drive hit overdrive, with members bringing trailers from across the state — Dunellen, East Rutherford, Bergen County, Mercer County, Hillsborough, East Brunswick, Howell Township, Clifton, Florham Park, Edison, Perth Amboy — to load with toys and make the run to Embrella headquarters in Princeton. As Spadea gathered large amounts of toys and piled them into a trailer, he knew they were doing it for children like Kirby’s niece and nephew.

“We can make it happier for them and make their Christmas a little better, especially after last year,” Spadea expressed. “That was one of the things I told them. I said, ‘We can’t have your kids not have another Christmas. Last year was a tough one. We understand, but this year the kids got to have something. Because they can’t go another year without having toys.’”

Embrella works with children of all ages, from infants to 18 years old, and Spadea recognized that a lot of times, the older children get forgotten about. Which is why the PBA Toy Drive ensures there is something for everyone.

“It’s just a great feeling giving back all the time,” Spadea declared as he continued unloading toys from the carts.

The mustering of toys showcased the creative efforts members deployed to generate donations. For Clifton Local 36, No-Shave November carried over to December to allow members to continue raising financial support for a cause. And for the first time, they chose the PBA Toy Drive.

Local 36 raised $5,000 to purchase toys for Embrella. Excitedly, members gathered at their local Target to buy scooters, remote control cars and other toys for the children.

“I hope they can just enjoy it,” Local 36 State Delegate Derek Fogg explained, showing toys neatly placed into a trailer. “I mean, it’s hard. It’s a hard life some of these kids have, and if they have a chance to enjoy a little bit of it and have a little bit better of a holiday by what these toys are going to bring to them, then that’s the main focus.” 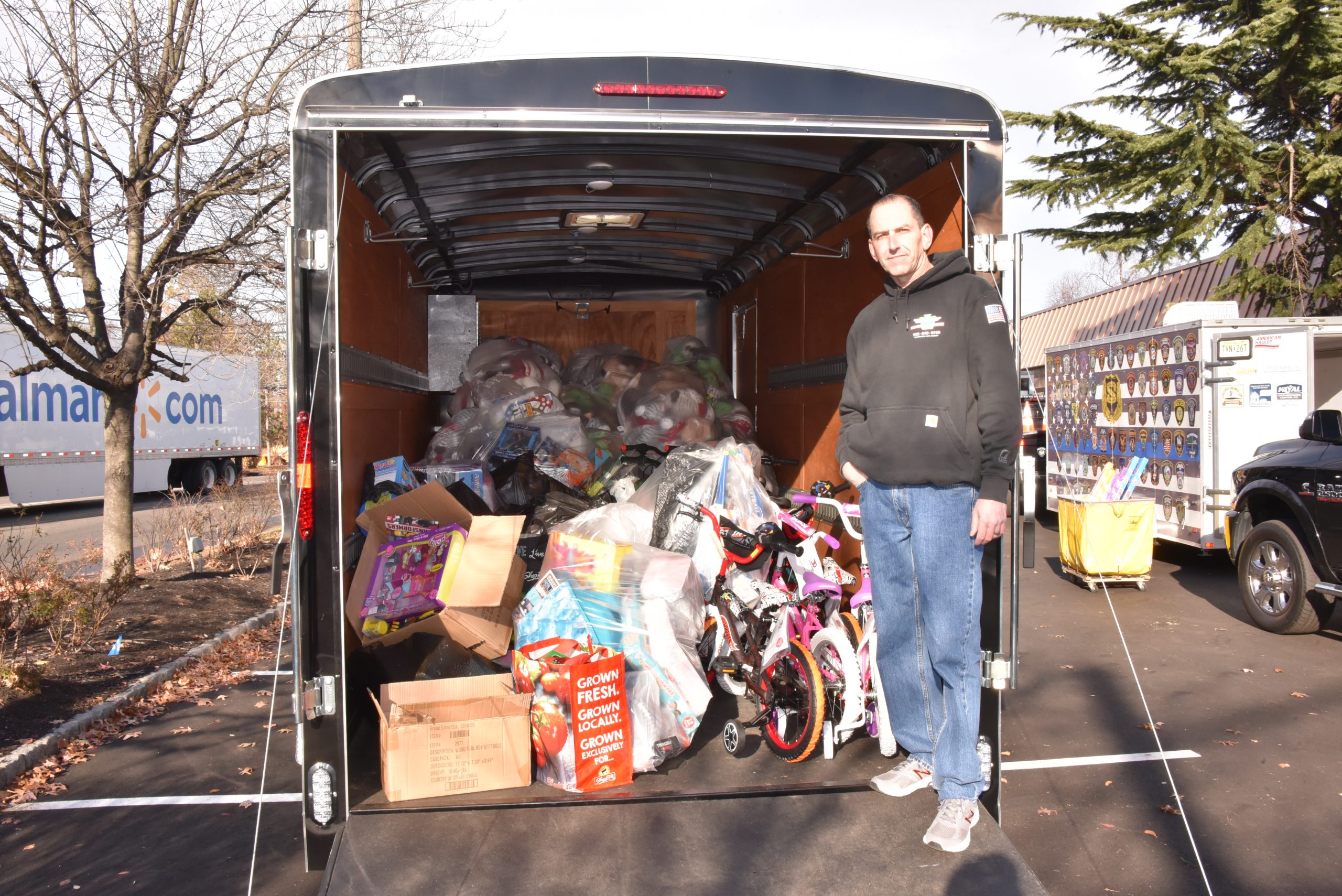 East Brunswick Local 145 State Delegate Brian Brownlie shows the hundreds of gifts filling his trailer that were collected as part of the Dunellen Local 46 movie night.

At the famed Dunellen Toy Drive Movie Night, Local 46 once again hosted members of the community, who were encouraged to dress in their pajamas and bring one gift per person to the showing of “The Polar Express.” The turnout of more than 100 people per show enjoyed hot chocolate, cookies, listening to Christmas music and photos with Santa at a local theater.

“The support that we get from the community is outstanding,” Dudley submitted. This year’s event even included one benefactor making it a corporate event for his business.

“They brought in $2,000 worth of toys,” he continued. “And they gave us a $1,000 check the night of, just so they could get the balcony for themselves. So it was absolutely fantastic.”

Hillsborough Local 206 hosted two movie nights with complete support from local businesses, who donated hot chocolate and chocolate chip cookies for the viewing of “The Polar Express” and “National Lampoon’s Christmas Vacation.” Hillsborough was inspired to do its own movie nights after one of its members who used to work in Dunellen suggested the idea. Over the two nights, there were more than 300 toys donated.

“Last year when Joe did his, I was kind of picking his brain about how to get it started and what they do and everything else,” Chris Giraldi explained. “We’ve always done a toy drive at work just at headquarters, and then I was like, this is an event that I think the community could get behind.”

Additional motivation came from thinking about the kids who receive the gifts.

To generate its donation to the PBA Toy Drive, Watchung Local 193 hosted a Fill a Patrol Car event from Dec. 3 to Dec. 5 to allow members of the community to drive by and donate toys. In the holiday spirit, members decorated a patrol car as Santa’s sleigh, complete with a reindeer and someone dressed up as Santa.

This year’s toy drive was another extension of Edison Local 75’s charitable spirit. After gathering items for Toys for Tots, members were eager to also donate to the PBA Toy Drive. They brought in gaming equipment like headphones, sports items and even some beauty products.

“We have a long history of bringing presents to the kids in the hospitals during the holidays,” Local 75 member Scott Lukes explained. “We donate all year long for kids that don’t have a lot, so this is just something we’ve always done and want to continue.”

Two Wallington Local 321 members rolled up in a car overflowing with donated toys. It was packed from top to bottom, so they could barely see out the back window and there was just enough room for the driver. After not participating in the toy drive last year due to COVID, the Wallington community rallied together to donate more than 200 toys to Embrella.

After all the toys were gathered and loaded, the caravan of nearly a dozen trailers readied for the drive to Princeton. Perth Amboy Local 13 members from the department’s motors unit provided an escort to lead the convoy. Filled with tremendous support and generosity from the community and PBA members, Santa’s sleighs were on the way.

“A lot of these guys just do it because they just love to just give back,” Spadea confirmed. “This is what we want to do. We want to give back to them for however the kids get their gifts.” 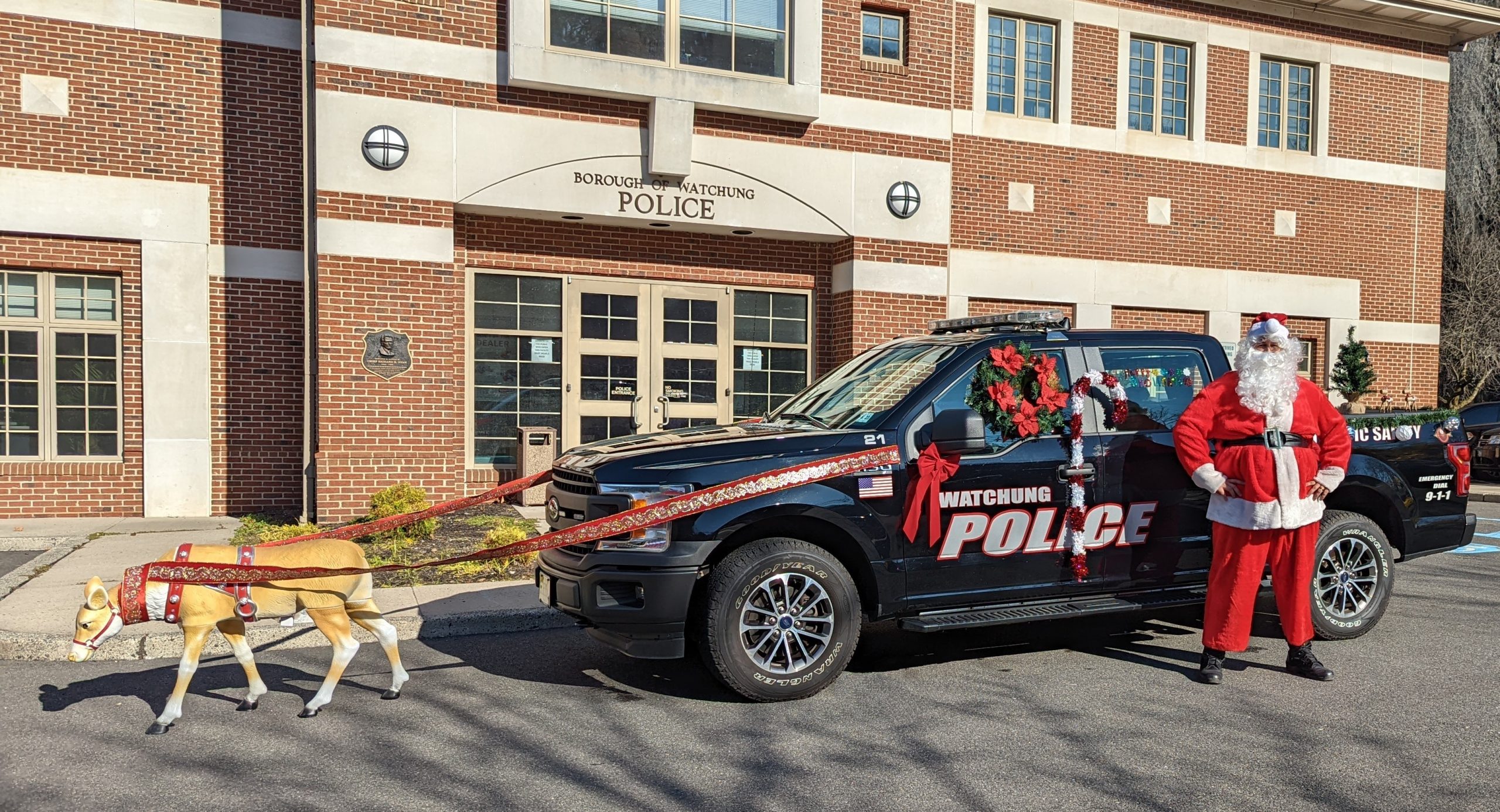 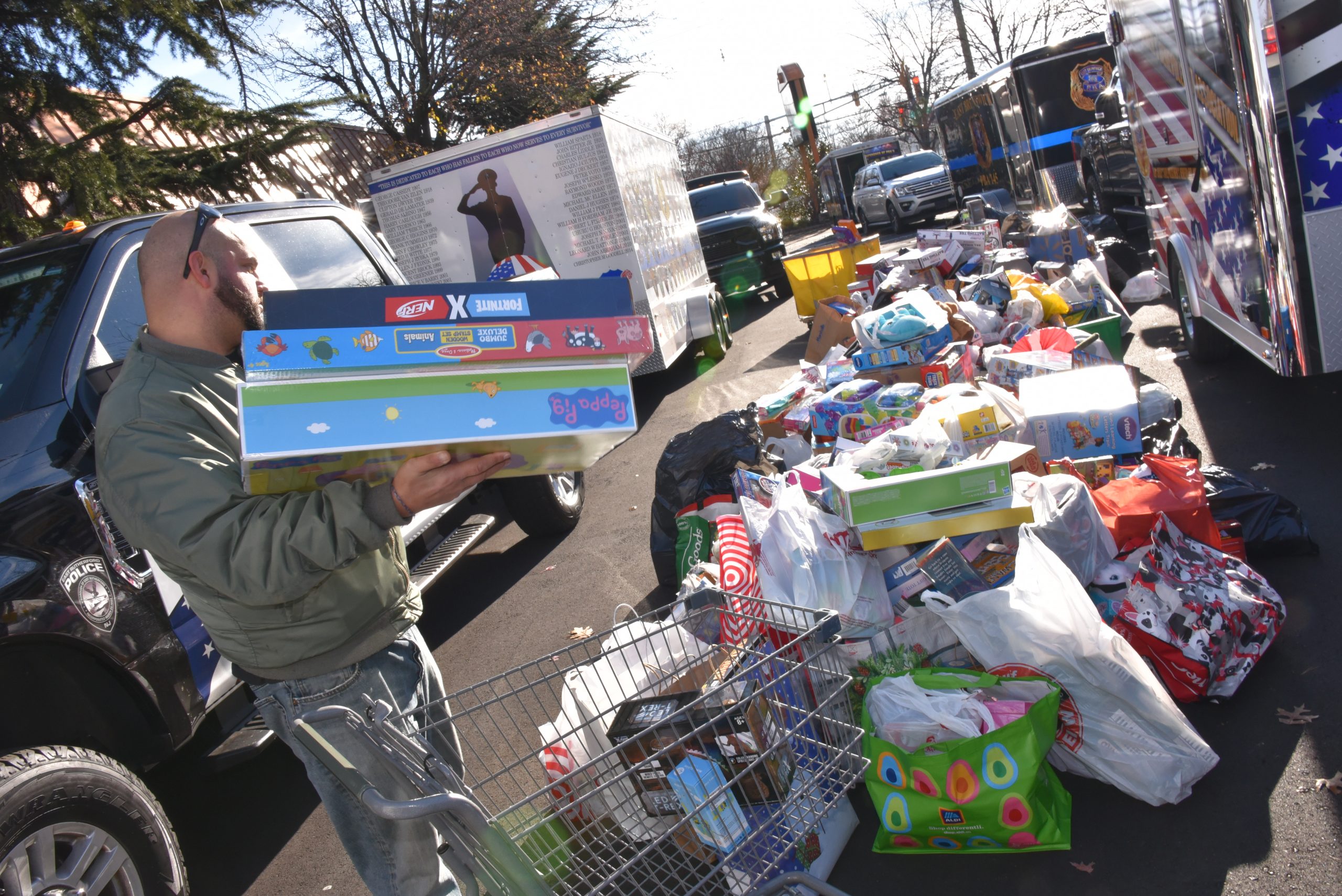 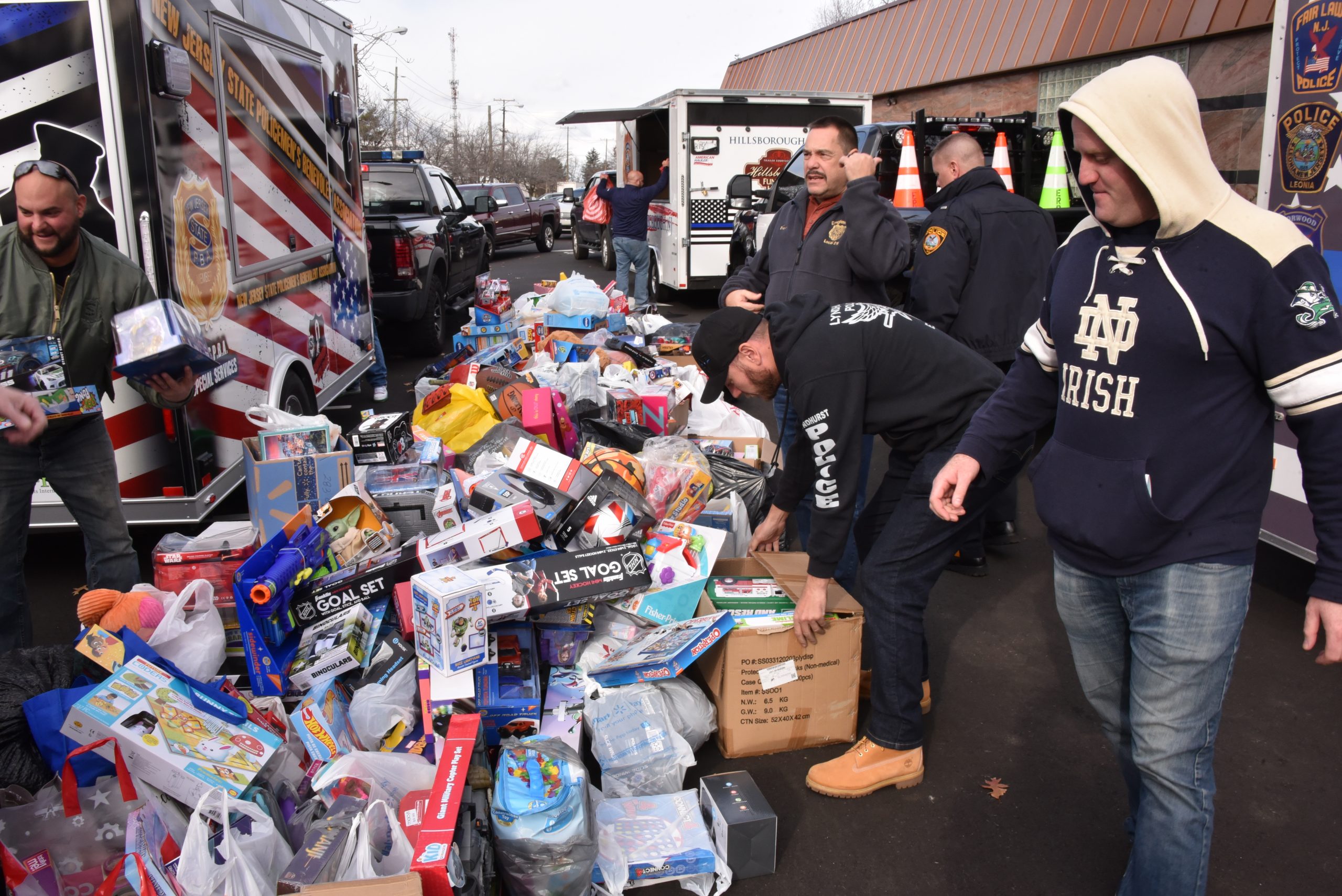 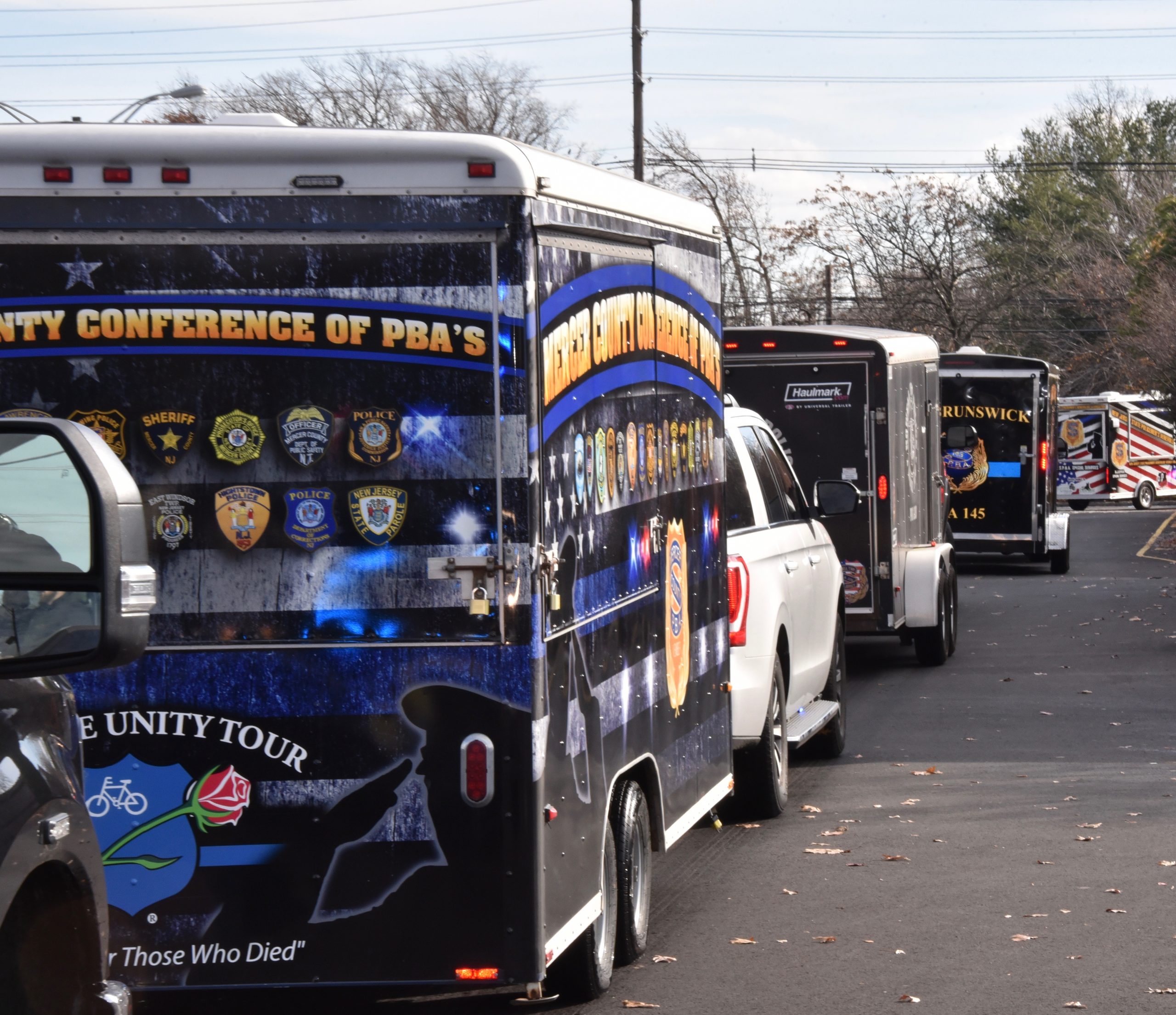