‘A teddy bear at heart’ 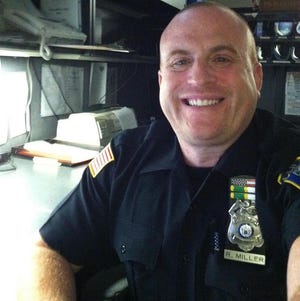 You could often find Sergeant Robert Miller at Six Flags with a group of officers, attempting to conquer the next tallest or scariest coaster Miller could find. Whether it was roller coasters or just the general ups and downs in life, Miller loved to shoot the breeze about his adventures. And it’s those conversations that Clifton Local 36 will miss the most.

Miller, 50, passed away suddenly on Feb. 5 from severe medical complications due to COVID. He leaves behind his wife, Kim, his two stepchildren and a department he loved deeply.

In 1998, Miller was hired as a dispatcher, and in 2004 he became an officer and Local 36 member. He worked midnights and was eventually promoted to sergeant in 2016.

Miller was known for his immense dedication to the job and his willingness to go above and beyond, not only for the department, but also for his fellow brothers and sisters in law enforcement.

Lieutenant Allan Fiorilli, who worked closely with Miller, recounted their time working together when Miller was still a patrol officer. His easygoing personality made him a great companion to work with on different shifts.

“He’s one of those guys that never changed,” Fiorilli praised. “He was always easygoing, happy and always willing to help people. He was basically a gentle giant. He might be a sergeant, but he’s still a teddy bear at heart.”

Miller has left behind a legacy that many are eager to follow. He was extremely dedicated to the job he loved, no matter what difficult situations he faced. And above all, he was dependable, Fiorilli recounted.

“It was a pleasure to work with him. You could always count on Bobby, on duty and off duty,” Fiorilli commented. “If you called him up when you were off and you needed something, and he can do it, he would never say no to it.”

Miller’s lovable personality and great sense of humor made going to work a great experience. Officers often looked forward to hearing his stories of the new roller coasters he triumphed over or listening to him recount complex work incidents he was involved with.

And he will always be remembered by his laughter and love.

“He was a guy that everybody loved,” Fiorilli added. “He was an all-around great person. There’s probably not one person in the police department or in the city that could say a bad thing about Bobby. Even when he got yelled at, he could never hold a grudge. That’s just the type of person he was.”