The Power Of: The first and only 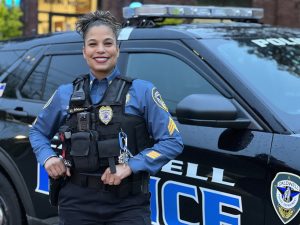 The Power Of: Trailblazing

Sergeant Leigh Leaf, a West Essex Local 81 member, was the first female officer to be hired by Essex Fells Police Department, as well the first female to be promoted to sergeant. She has 11 years of service. 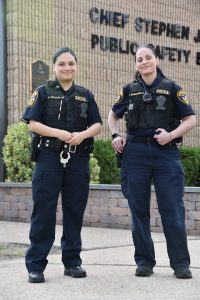 The Power Of: Community policing

Officer Katrina Guevara (left) is one of three bilingual officers in the Fairfield Police Department. With one year on, she has been called on repeatedly to handle translation, which has allowed her to interact with the community. Officer Stacy Chiarolanza has been on for 20 years and was the second female ever hired in as a police officer in the department. In addition to serving as a resiliency officer, her work in the community policing unit has made her known as “Officer Stacy” in the elementary schools. Both officers are West Essex Local 81 members.

The Power Of: The female presence 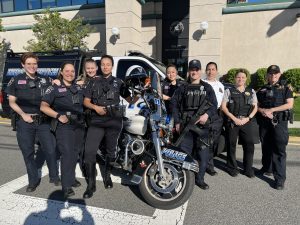 From left, members of Fort Lee Local 245 include:

Officer Kelsey Ford has been on for seven years and works in Uniform Patrol.

Officer Carmen Firenze has been on for five years and is a Humane Law Enforcement Officer.

Officer Christine Bizub has been on for one year and works in Uniform Patrol.

Officer Natalie Mateus has been on for five years and works in the Emergency Services Unit. She is also the first female in the motorcycle unit.

Officer Alice Ji has been on for four years and works in Uniform Patrol. She is trilingual and a certified Horizontal Gaze Nystagmus (HGN) officer.

Detective Christina Blue has been on for 15 years and works in the Emergency Services Unit. She is a member of the honor guard and a certified Police Training Commission instructor.

Captain Andrea Cappola has been on for 23 years and is the first female patrol captain. She is certified Police Training Commission instructor.

Detective Deborah Siracuse has been on for 19 years and is a Humane Law Enforcement Officer.

Sergeant Michele Byrnes has been on for 23 years and is patrol supervisor.

The Power Of: The chief 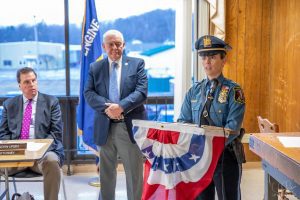 Megan McClusky has been on the job for 19 years and was officially promoted to Hopatcong Police Chief on March 16. She said she realized she had earned the respect of the male officers in her department when after making sergeant, they started calling her when she was off duty to ask how she would handle certain situations. McClusky also served as the Hopatcong Local 149 State Delegate from 2007 to 2009 and has completed the Police Unity Tour multiple times.

The Power Of: Experience 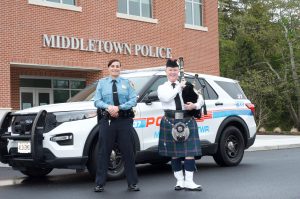 Middletown Police Department Detective Lieutenant Kimberly Best (right), who has been on for 25 years, has been a piper since 1998 and is a solo competitor in the Eastern United States Pipe Band Association. She is the first female bureau commander in the department who worked in SVU for eight years. She is a past president of the Monmouth County Juvenile Officers Association. Detective Erica Weeks, who has been on for eight years, is the special victims unit detective and the bias crimes detective. She is a member of the Internet Crimes Against Children Task Force which investigates the online sexual exploitation of children, an FTO and the LGBTQ liaison for Middletown PD. Both officers are Middletown Local 124 members.

The Power Of: Special service 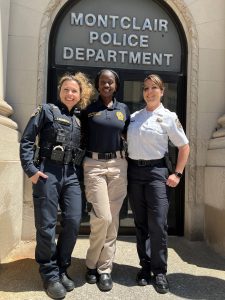 Detective Lisa Gutauskas, left, has been on for 25 years, serves as the Montclair PD domestic violence liaison and is a firearms instructor. Detective Anjannette Sanders, center, has been on 14 years, the past eight with Montclair. She is a school resource officer and a lead instructor for Law Enforcement Against Drugs. Lieutenant Stephanie Egnezzo, right, has been on for 25 years and has worked in community policing, bicycle patrol and the detective bureau as the domestic violence liaison and is currently the Traffic Bureau commander. She is the first female firearms instructor ever for the department, the second female ever to make rank and has been a certified Police Training Commission instructor for the past 22 years. They are Montclair Local 53 members.

The Power of: Promotion 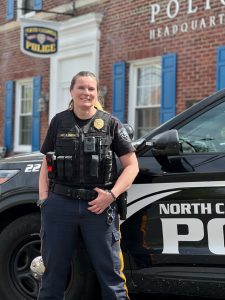 Sergeant Sue DePoe, a West Essex Local 81 member, has been on for 18 years. She was promoted as the first female sergeant for the North Caldwell PD in 2019. 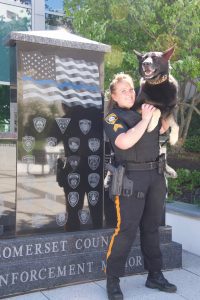 The Power Of: The K9

Sergeant Shannon Snook works narcotics and patrol with K9 Basilone. She is a 15-year veteran of Somerset County government. She is an honor guard member, an FTO, a certified Police Training Commission instructor and has ridden the Police Unity Tour every year since 2016. In 2015, she was honored as Somerset County Outstanding Woman of the Year. She is a member of Somerset County Sheriff’s Office Local 272. 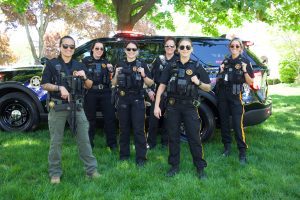 The Power Of: The sheriff’s office

Pictured from left are Sergeant Karissa Hahn and Sheriff’s Officers Refika Kolenovic, Yessenia Martinez, Jean Straz, Christina Stout and Rebecca Phillips. They are Somerset County Sheriff’s Officers Local 272 members. Hahn is the Local 272A acting president and is the first female in the department to make the special response team. Other notable achievements from this group include Martinez being the youngest Hispanic female hired as a sheriff’s officer and Phillips serving with the Bias/Hate Crime Prevention Unit and being a member of the New Jersey LGBTQ Law Enforcement Liaisons. 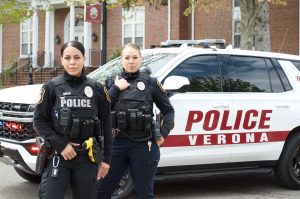 The Power Of: SWAT and TAC

Officer Stephanie Colon, left, has been on for six years and is the first Hispanic female officer in Verona and the first female SWAT operator in the history of the Verona Police Department. Officer Alyssa Kirby has been on for nine years and is an FTO, a PT instructor and a TAC Alternate. Both are Verona Local 72 members. 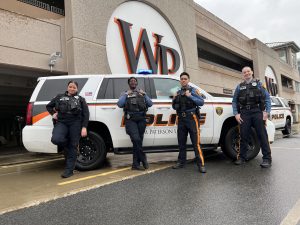 The Power Of: The State Campus Police

Above, from left, William Paterson Campus Police Officers Sabrina Rosado, LaWanda Walker-Roney, Karla Torres and Liz DeSantis. Walker-Roney has been on for more than 20 years, and in 2020, she was promoted to sergeant. DeSantis serves in the community policing unit and works with the university’s Student Safety Patrol. She is also the State Campus Police Local 278 president. Rosado is a wife and mother who began her career in 2017, following in the footsteps of her grandfather, who is a retired Paterson police captain. Torres serves as the LGBTQ liaison for the department is also mother of a five-year-old son. All are State Campus Police Local 278 members.