Imagine you are a law enforcement officer making a routine traffic stop for speeding. You approach the vehicle to find that the driver is slurring his speech.

Your first instinct might be to presume that the driver is drunk, which is a reasonable assumption based on the behavior.

But what if they aren’t drunk? What if they have dysarthria, a motor speech disorder?

Now imagine the same scenario, except the driver shows you a self-identification card indicating a communication impairment. The card would be proof that there is a reason for slurred speech other than being intoxicated, and there would be no room for any misjudgment or error. No need for a breathalyzer. No DUI.

A simple identification card could prevent an unnecessary ticket being issued while also creating a comfort zone for both the driver and the officer that would keep the situation from escalating.

De-escalation with law enforcement officers is exactly what New Jersey Speech-Language-Hearing Association (NJSHA) members had in mind when they were brainstorming ideas to better serve people with communication disorders.

“It’s really important to teach police officers about communication disorders so that they recognize that that might be the case rather than assuming that a person is incapacitated,” explained NJSHA president Robynne Kratchman, a speech-language pathologist and the director of Speech Language Pathology Programs at Speech & Hearing Associates in Westfield. “When people who can’t communicate but have their full cognitive capacity are out in the world, the fact that they can’t communicate effectively can cause real-life trouble. And we don’t want that to happen.”

So the NJSHA put together an initiative to teach law enforcement about communication disorders that includes creating a communication board for officers and self-identification cards for drivers who have difficulty communicating in stressful situations. The idea is to create awareness among law enforcement of disorders and avoid potential problematic interactions on the road. 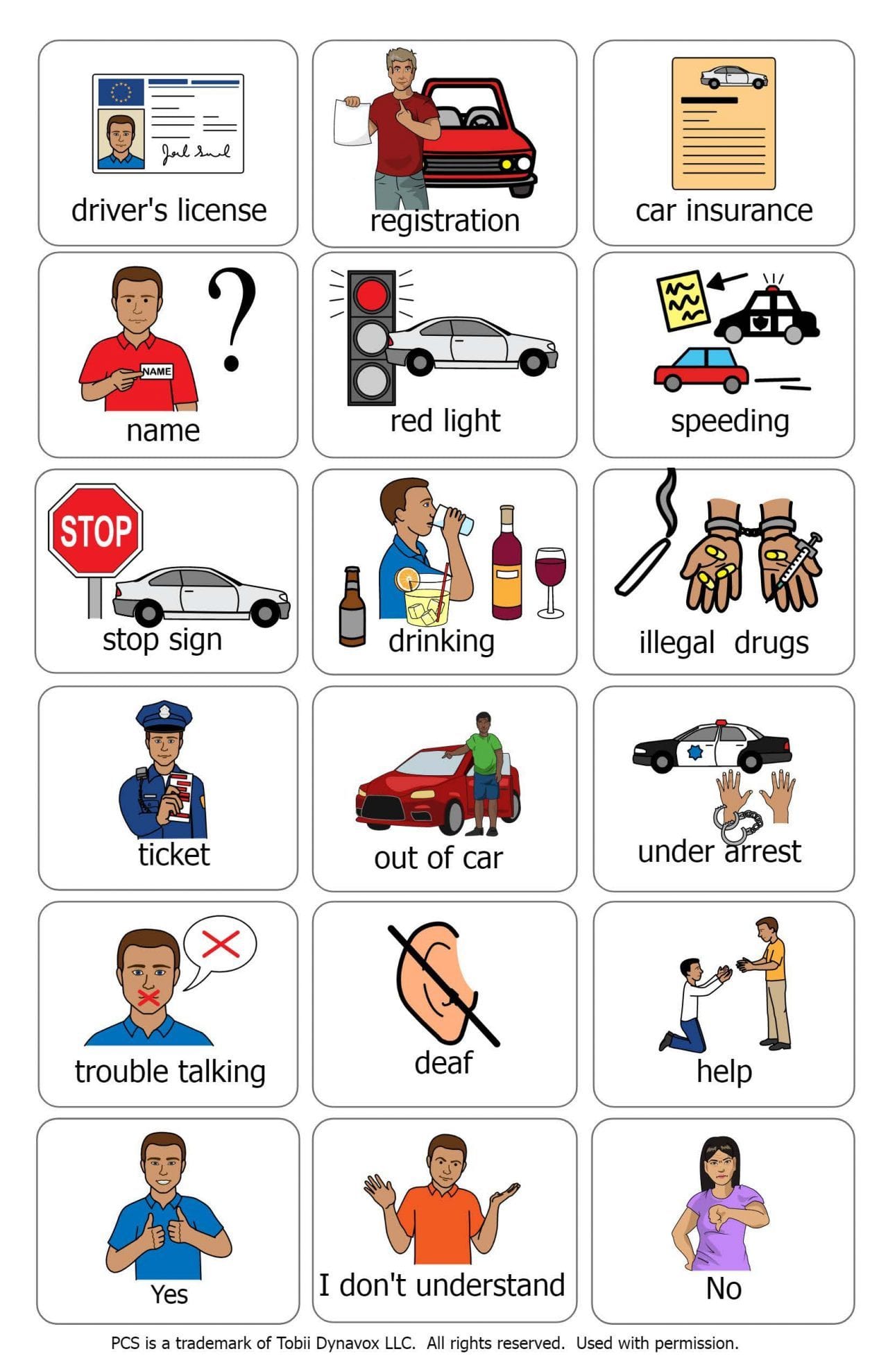 The NJSHA and NJSPBA are working together to provide a communication board that can fit into an officer’s ticket book and includes symbols showing different communication disorders.

The program also targets those with selective mutism, who can speak only to people they feel comfortable with, as well as those who have had a stroke or laryngectomy. It can also aid people with language disorders including aphasia, dysarthria and apraxia.

“As communication specialists, we do much more than work with children who can’t pronounce their S’s and R’s and L’s,” Kratchman relayed. “We work with anybody who has difficulty with communication across the lifespan, so [this initiative] just made sense.”

In April 2019, the NJSHA sought out NJSPBA President Pat Colligan and Executive Vice President Marc Kovar to discuss forming a partnership to put their ideas into action.

“We really wanted to partner with the PBA for the betterment of all our constituents, and they were all for it and very excited,” Kratchman noted. “We decided that it would make sense to create a communication board that would fit into [an officer’s] ticket book because that’s something they carry with them all the time.”

The communication board is the size of a standard sheet of paper. The NJSHA received permission from a company to use certain symbols showing the different kinds of communication disorders, so that officers can easily identify a person with a disorder when they see one.

They also created prototypes of self-identification cards that people will be able print from the NJSHA and NJSPBA websites in black-and-white or color that indicate that they have a communication or hearing impairment. 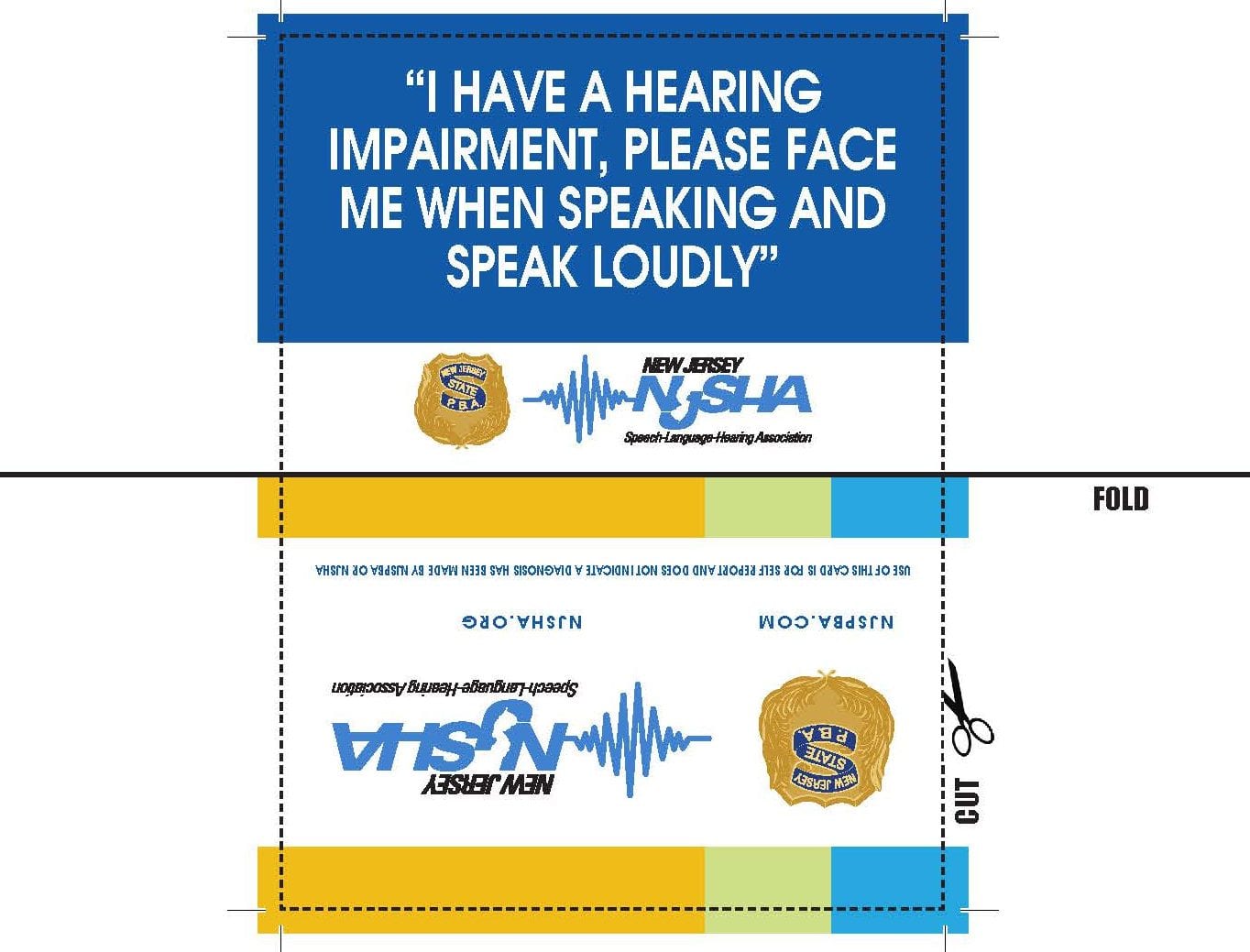 The hearing impairment version of the self-identification card.

The cards are two-sided and about the same size as a license or registration. They are to be used for self-identification only. They will include different vocabulary that might be needed if the person is stopped.

“We have a disclaimer in here saying, ‘Use of this card is for self-report and does not indicate a diagnosis has been made by either NJSPBA or NJSHA,” mentioned Donna Spillman-Kennedy, the NJSHA public relations chair. “We really just want to put communication, alternate communication, into the hands of officers when they’re dealing with citizens, to have very positive outcomes.”

The communication impairment version of the self-identification card.

But how do they know this will work?

Well, Jacqueline Ahrens, a speech language pathologist who worked with training law enforcement officers in speech therapy as part of earning her master’s degree from Kean University, can provide proof to support the NJSHA and NJSPBA’s initiative.

“The results of that study showed that it was very difficult for a law enforcement officer to be able to differentiate between the two,” Ahrens described. “[Officers] come into these situations where they have to make quick decisions. And without this type of background or knowledge base, which really is more of our field, they were having a difficult time making those quick judgment calls.”

“I kind of did a situational post-test, and having that simple bit of information did help their skill set in terms of being able to make a good judgment call,” Ahrens relayed. “Given the background training and the tools, it can significantly help an officer make difficult decisions when it comes to how to judge if somebody’s under the influence or has a different type of issue that they might need help with.”

She added that the officers welcomed the extra training. In fact, it was so helpful that they reached out to Ahrens for follow-up training and more information.

“I remember seeing their faces, and it was kind of like this moment of shock, like, ‘Oh my gosh, there’s so much more to this,’” Ahrens expressed. “And I think that they really found the value in how much it can really change the trajectory of an interaction. The officers were the ones who were saying, ‘Especially where I work, we need this type of thing to speak to people of different languages.’”

Ahrens believes that the officers have the right idea, because the initiative is not only to help people with specific communication issues, but also to create more comfortable interactions between officers and citizens.

“It crosses cultural and linguistic borders,” Ahrens offered. “It’s just something that’s going to be so beneficial in probably more situations and ways than we can think of right now. And [the officers] were bringing that to the table to me. They were seeing the value of it themselves.”

Officers will also be able to find more information about communication disorders straight from the identification cards. The back side of the card will include the NJSHA website, along with other websites that define what the different disorders are and what to look for.