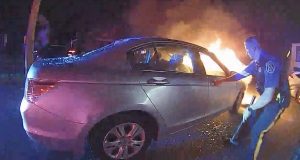 The raging fire glowed, flames crackling as the blaze consumed the front end of a stalled Honda Accord.

Emotional shouts punctured the air as Ridgefield Park officers raced against time to save the driver.

Seeing this scene play out on bodycam video elicits plenty of heart-racing moments. But for Ridgefield Park Sergeant Nick Triano and two of his shiftmates from Local 86, this life-and-death situation was reality at 2 a.m. on July 2 along Route 46.

“The first few times I watched it again, the hairs on the back of my neck started standing,” Triano described. “You get goosebumps. You’re like, wow, this was pretty intense stuff.”

The intensity started for Triano, an 18year veteran, after the call of a car fire first came in. He was rolling on his own while several other officers were processing a large heroin bust from earlier in the evening. Car fires aren’t an unusual call, so he headed toward the parking lot of Mavis Tire and, once there, approached the Accord with a fire extinguisher.

Things escalated quickly. Triano realized there was a man in the driver’s seat. He tried the driver’s side door to no avail as the 55-year-old man from Fort Lee made it clear he was trapped inside. As a passerby tried to help out with another fire extinguisher, Triano’s instincts guided him even as he realized the direness of the situation.

“The entire time we’re working on [getting the man out], the whole front end is ablaze,” Triano recalled. “Every second seemed like an eternity. We were just trying to get this guy out as quickly as possible because the fire is creeping up toward the passenger compartment.”

Ridgefield Park Officers Anthony D’Elia and Nicholas D’Alto arrived shortly after Triano discovered the man inside — the seriousness of Triano’s voice as he radioed that pivotal fact had resonated with the pair. The initial efforts focused on pulling the man out the driver’s side, but the intense heat and proximity of the flames, as well as the steering wheel and the man’s seat position, made that increasingly more difficult even after Triano used a Halligan bar to smash the window.

The trio switched their tactic to attempting to pull the man through the front passenger side window.

“There were times when we were reaching in far enough that we were in the passenger compartment with him,” Triano explained. “Everyone was, at one time, taking a fire extinguisher, trying to beat [the fire] back long enough for us to get this guy out. Luckily, he did stay conscious the entire time because he was able to assist as much as he could. If we lost that, it would’ve been a whole ’nother set of issues.”

The video shows the climactic moment when the man was tugged by his arms forcefully to finally clear the vehicle. The officers pulled him across the parking lot. Amazingly, the man suffered only minor scrapes to his legs. None of the officers were hurt.

“We had seconds to spare. The fire was coming fast,” Triano said. “We were very lucky all around with how it turned out.”

After the adrenaline dump, the seriousness of the situation hit the three officers, who still modestly see even this life-or-death response as just part of the job.

“We’re paid to save people’s lives and take them out of burning cars,” Triano offered, adding that they appreciated the messages from the man and his family to the officers for their life-saving actions. Triano called it “complete relief” for everyone involved that the rescue proved successful.

“He personally reached out to our police department, which was very gracious of him,” Triano added. “Also, his father wrote a beautiful letter thanking us for saving his son’s life. It really meant a lot.”

Although the officers aren’t specifically trained in fire rescues, there is no hesitation or overthinking in the heat — literally — of the moment when someone needs them. “

That’s why most of us get into this business. We really, truly are here to help people,” Triano noted. “When we see someone in need, I don’t know what switch flips, but we’re ready to do whatever we have to do to make sure that person is safe.”

Triano also heaped plenty of praise on D’Elia, who has been on for a year, and D’Alto, who has been with Ridgefield Park for 10 years. He called them “great guys” who love the job and working for the community.

“We’re just excited to get out there and do a good job,” he added. “We have a great shift. We have great camaraderie. We have a really good thing going in Ridgefield Park.”