Honoring Steve Kalafer for how he gave his support, his guidance, his care and his love to the NJSPBA and its members

President Pat Colligan thanks Steve Kalafer for the truck Flemington Car & Truck Country provided to the NJSPBA to haul its special services trailer.

Back in the summer of 2015, the NJ State PBA blueprinted its plan to put a new, deluxe special services trailer on the road. A big sucker. Really big.

Pat Colligan had been specking out the rig with a designer, who asked what vehicle he would use to tow the new trailer. When the PBA president responded, “a Ford Expedition,” he heard only laughter on the other end of the line.

“He told me I needed a heavy duty pickup truck,” Colligan recalled. “We really didn’t have any money for that. I’m thinking maybe jumped in before we should have.”

In search of a solution, he reached out to a contact in the auto dealership world who told him he had to meet a guy named Steve Kalafer. Kalafer had built the mecca, Flemington Car & Truck Country. She told him, “He’ll give you the truck.”

After a little laughter on his end of the line, Colligan called Kalafer. Somehow, the conversation ended up on doughnuts. He had just been the police representative on the doughnut tour with the Star-Ledger.

“So I picked up a dozen of my favorite Plainfield jelly doughnuts and I had an appointment with Steve at 10 a.m.,” Colligan continued. “I had a commitment for the truck by 10:30. And he also gave us $10,000 toward the trailer.”

If he could help somebody, if he could greet you with that infectious smile as he did with every one of his team members every morning, if he could bring good cheer and unwavering support for the law enforcement officers he loved so much, Steve Kalafer never said, “no.” In fact, as NJSPBA Executive Vice President Marc Kovar cherished about Steve, “He treated everybody like he knew them forever.”

We will always remember and love Steve Kalafer, who passed away on April 21 at 71 following a long and brave battle with cancer. He had the DNA and heart of the PBA’s and the profession’s finest – Colligan, Kovar, Wieners, Madonna and so many others who knew Steve and revered him. He had the demeanor of a consummate public servant, giving his heart to law enforcement on every opportunity.

“I’ve heard the stories of the lives he saved and the lives he changed,” Colligan extolled. “If somebody had something bad to say about Steve Kalafer, they were lying. Even as a businessman, it was rare that he didn’t leave people smiling. He had a sincerity that you just don’t see. Ever.” 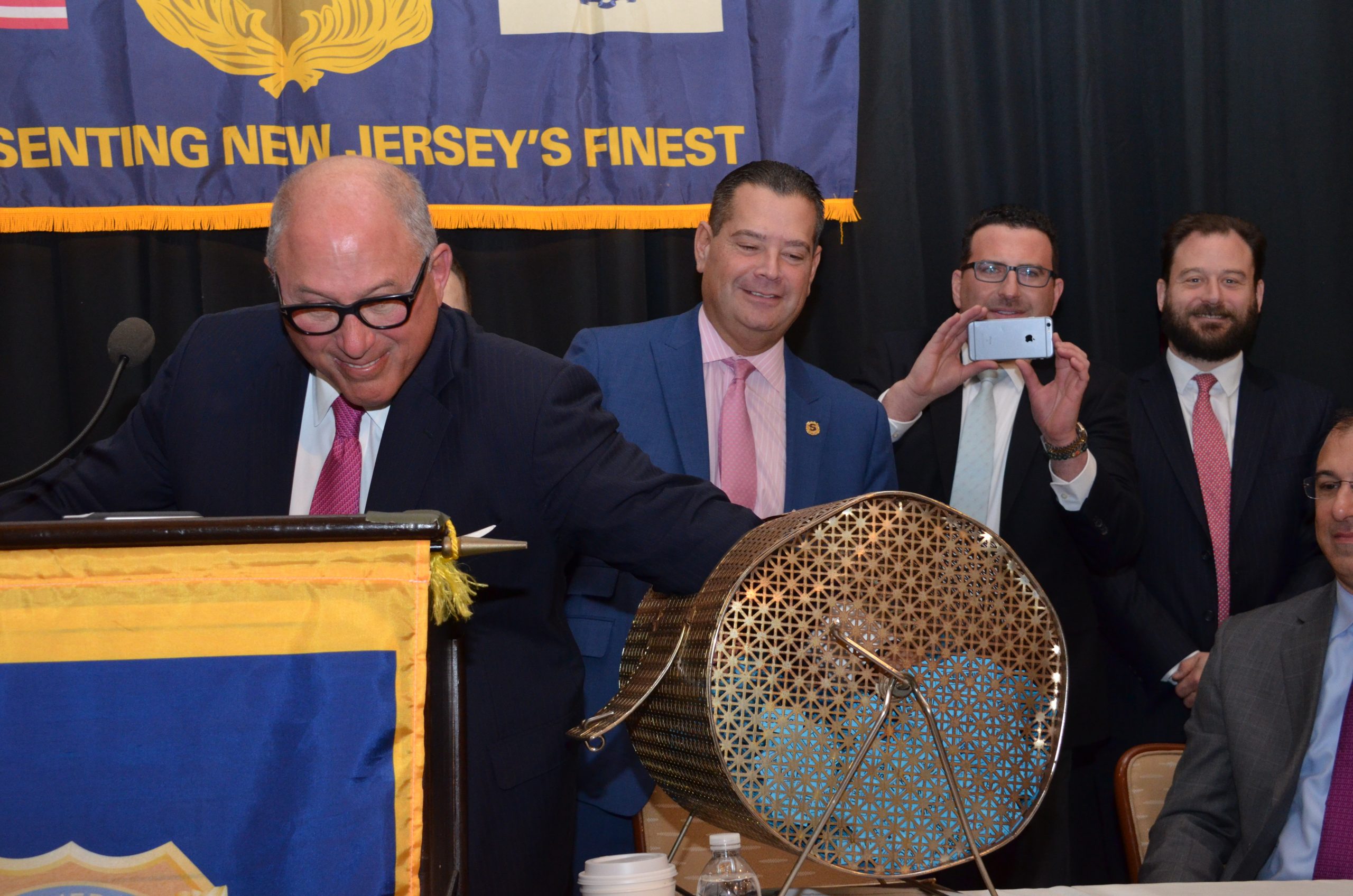 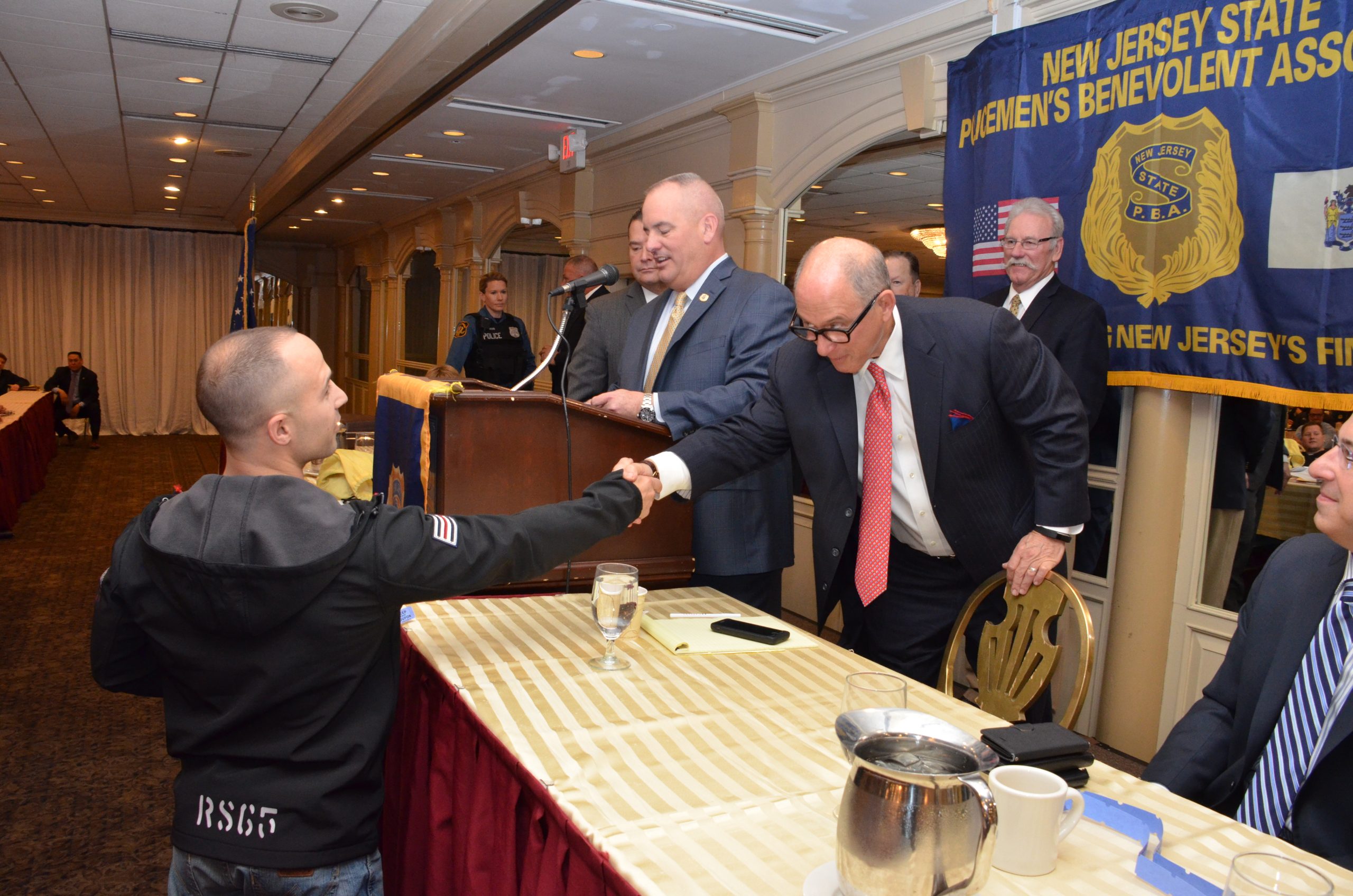 Kalafer would come the PBA Mini Convention every year to make a special contribution to the 50-50 drawing. Afterward, he would always meet the winner to express his love for PBA members.

In December 2018, Kalafer and his team – sons Joshua and Jonathon and Flemington Car & Truck Country Vice President and General Manager Emeritus Jerry Sheehan – made one of their beloved appearances at a PBA state meeting. They had come to present a new pickup truck for the PBA to haul its newer and bigger trailer.

This also happened to be the meeting when the PBA held its toy drive to benefit New Jersey Foster and Adoptive Family Services. Kalafer took one look at the thousands of toys collected, came to the podium and announced a donation of 50 Kindle Fire Alexa-enable tablets. And if those could be provided to young adults to support their educational advancement, Flemington would donate an additional 50 Kindles.

The greatness of law enforcement had once again touched his heart, and he let the members know how much.

“I did not expect to see the thoughtfulness and decency you all put into this toy drive,” Kalafer told the members. “It upsets me greatly that there are people out there – panderers and pimps – who when it comes to doing the right thing for law enforcement trade out headlines or a statement that put you and your families in danger.”

Then he made his own statement about what brought him here, about what motivated presenting the new truck, a bevy of Kindles and a whole lot more.

“You know, I get a lot of phone calls from elected officials who ask me to be quiet about my support for you,” he continued. “Well, I’m not going to be quiet.”

Of course, Kalafer was always a stand-up guy, more than somebody who put his money where his mouth is. He had so many friends, but even more admirers, who were easily and often moved to words of esteem.

“Supporting law enforcement is not the most popular business decision in 2018,” Mr. President authored. “But that’s not his concern. His concern is to know the women and men in blue are appreciated.”

Steve had one way of greeting people. He did it every day for employees, whom he valued so much that he knew the names of each of their spouses, their kids, the grandkids and their dogs.

Several weeks ago, Kovar had run into Kalafer at a restaurant. The executive vice president was dealing with some of his own ongoing health issues while Kalafer was fighting cancer. With that omnipresent smile always shining, however, Steve looked for all the world like he was winning.

What happened next was the feel-good moment that Kalafer brought every second of every day.

“He came over and gave me the biggest hug in the world,” Kovar disclosed. “It just made me feel so good. I wish the world had a thousand Steve Kalafers with what he did for local law enforcement. Every time I was in his company, he made you feel special.”

In 1976, similar euphoria overcame Sheehan during his first encounter with Kalafer when he had just come into the auto business. A few years later, Sheehan was managing a dealership in Colonia. Kalafer had his first dealership in Frenchtown, working his way up from working his way through college as a Fuller Brush Man selling door to door.

After several calls from Kalafer over the years, Sheehan decided to take a meeting that would change his life. That was nearly 30 years ago when he finally went to work for Kalafer.

“I was Marine combat veteran of Vietnam before I came into the business, and I thought I knew people pretty well,” Sheehan began. “But Steve was so much more. He just made you want to listen. He made you understand what he was talking about. I just fell in love with the guy the minute I met him.”

Sheehan explained how he learned a way of doing business from Kalafer grounded on how to treat people. He treasured how Steve took or returned every phone call, how he followed through on everything he said and promised, how easy he was to trust and his contagious sincerity.

“His reason to be on Earth was to help people,” Sheehan confirmed.

They had sold some cars to Paterson officers in the 1990s, and that became their tipping point to the PBA. Past President Mike Madonna became one of his good friends, and when Steve’s father passed away, Madonna arranged for a police motorcade to take him from the funeral in Flemington to be buried in Woodbridge.

He learned about the PBA Survivor & Welfare Fund and became an immediate benefactor. Tony Wieners had moved up to president when Flemington became a premium sponsor of the PBA golf outing for Survivor & Welfare.

Then came the opportunity to help the PBA put the trailer and truck on the road. As his relationship with Colligan and Kovar flourished, every PBA vehicle became a Flemington brand. If you looked around the parking lot of a PBA meeting the past several years, so many cars had the Flemington sticker on the back bumper.

After providing that first truck, Kalafer initiated a program to donate $200 to the Survivor & Welfare Fund for every car he sold to a member. Within in five years, he had contributed more than $150,000.

But nothing ratcheted up that smile like seeing the PBA trailer on the road. 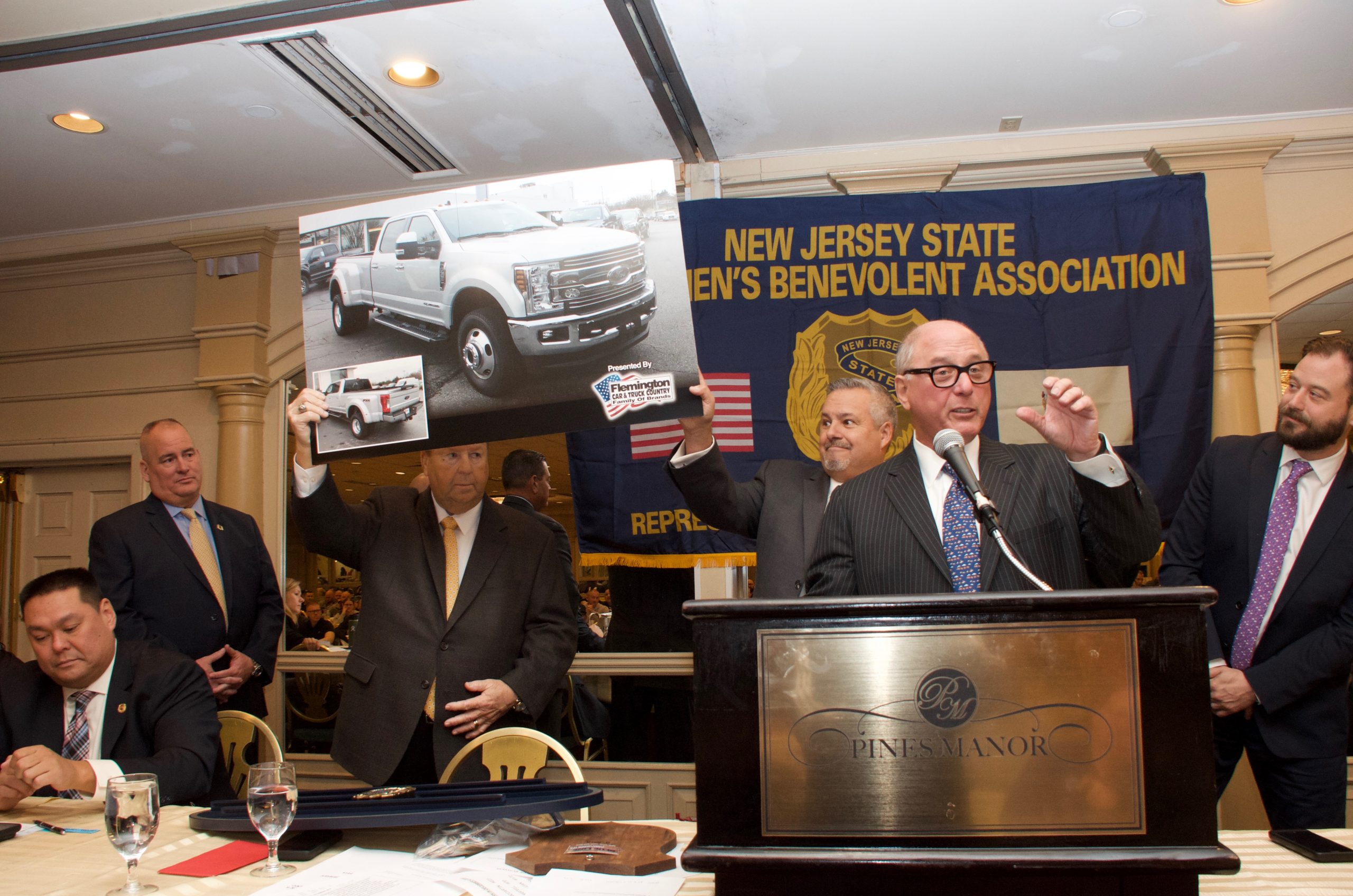 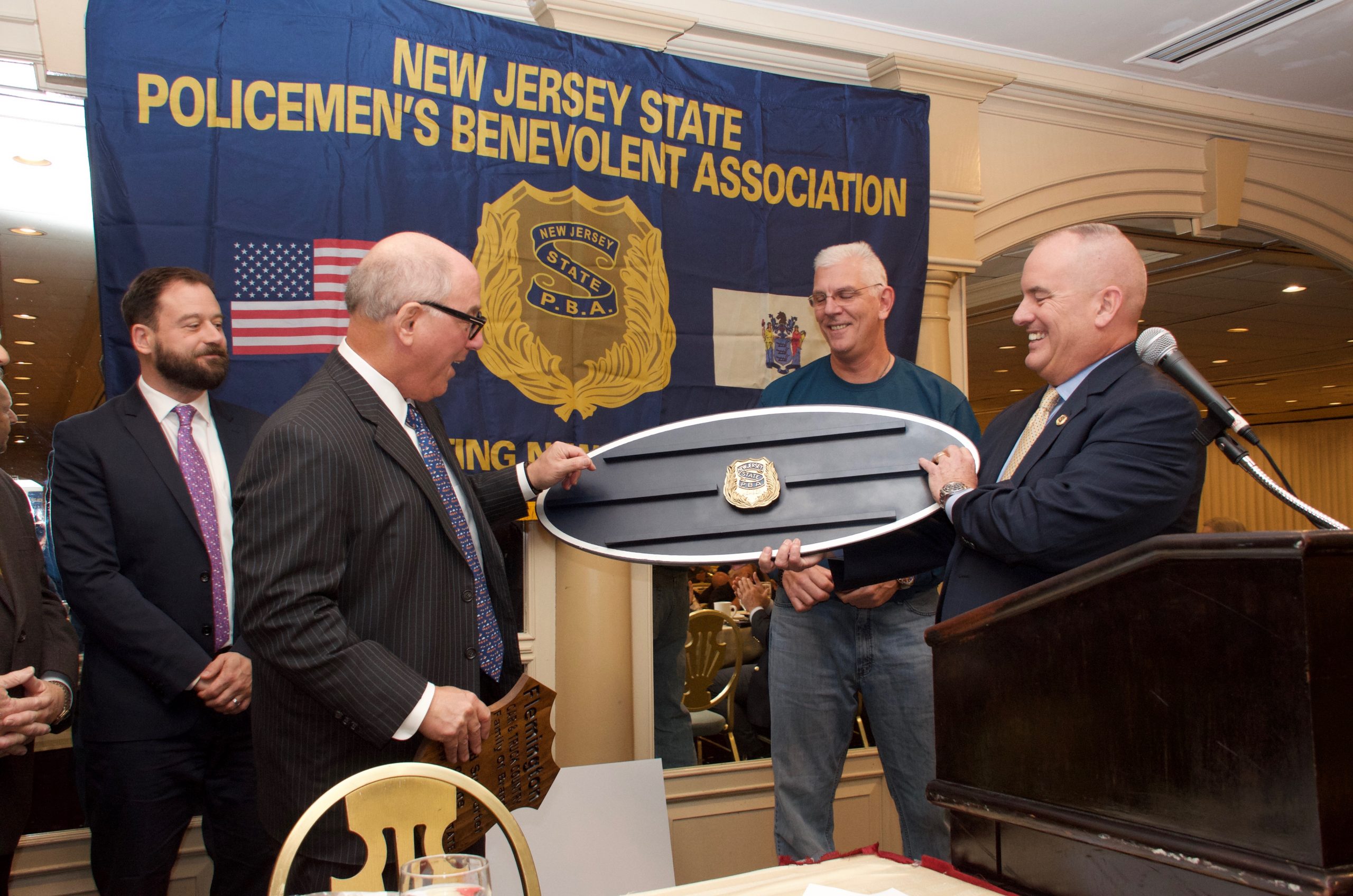 Kalafer presented the new truck he provided to the PBA in December 2018. The PBA gifted him a custom-made plaque to show appreciation for his unprecedented support.

There was nothing Kalafer loved more than making his annual pilgrimage to the PBA Mini Convention in Atlantic City. He would bring Yankees legend Sparky Lyle, the manager emeritus of the Somerset Patriots minor league baseball team Kalafer founded, with him.

They would tell stories and crack wise, always headlining the middle-of-the-week meeting. He knew well how to provide a provide a pick-me-up, and Colligan shared how the laughing would continue for hours after when Steve and Sparky would take the PBA leadership to lunch.

And this was always an occasion when he would put his money where his mouth was. During his appearance in 2016, Kalafer stopped his remarks to ask how much had been collected for the 50-50 drawing held at the end of each day’s meeting.

“What’s the number?” he asked the members.

“You could just feel the excitement in the crowd when he came up, everybody whispering, ‘What’s he going to say,’” Kovar recalled. “The electricity in the room was crazy.”

With apologies to Hugh Jackman, Steve Kalafer was the greatest showman. He was a gifted producer of documentary films, being honored with four Academy Award nominations and numerous Sundance Film Festival and the Tribeca Film Festival awards.

Kalafer was also a former member of the New Jersey Motion Picture and Television Commission under the Kean administration, and served as an appointee to Governor Christine Todd Whitman’s Economic Master Plan Commission. He was inducted into the New Jersey Hall of Fame’s class of 2019/2020 in the Enterprise category.

“You can’t know Steve Kalafer and not be impacted by what he did,” Colligan declared. 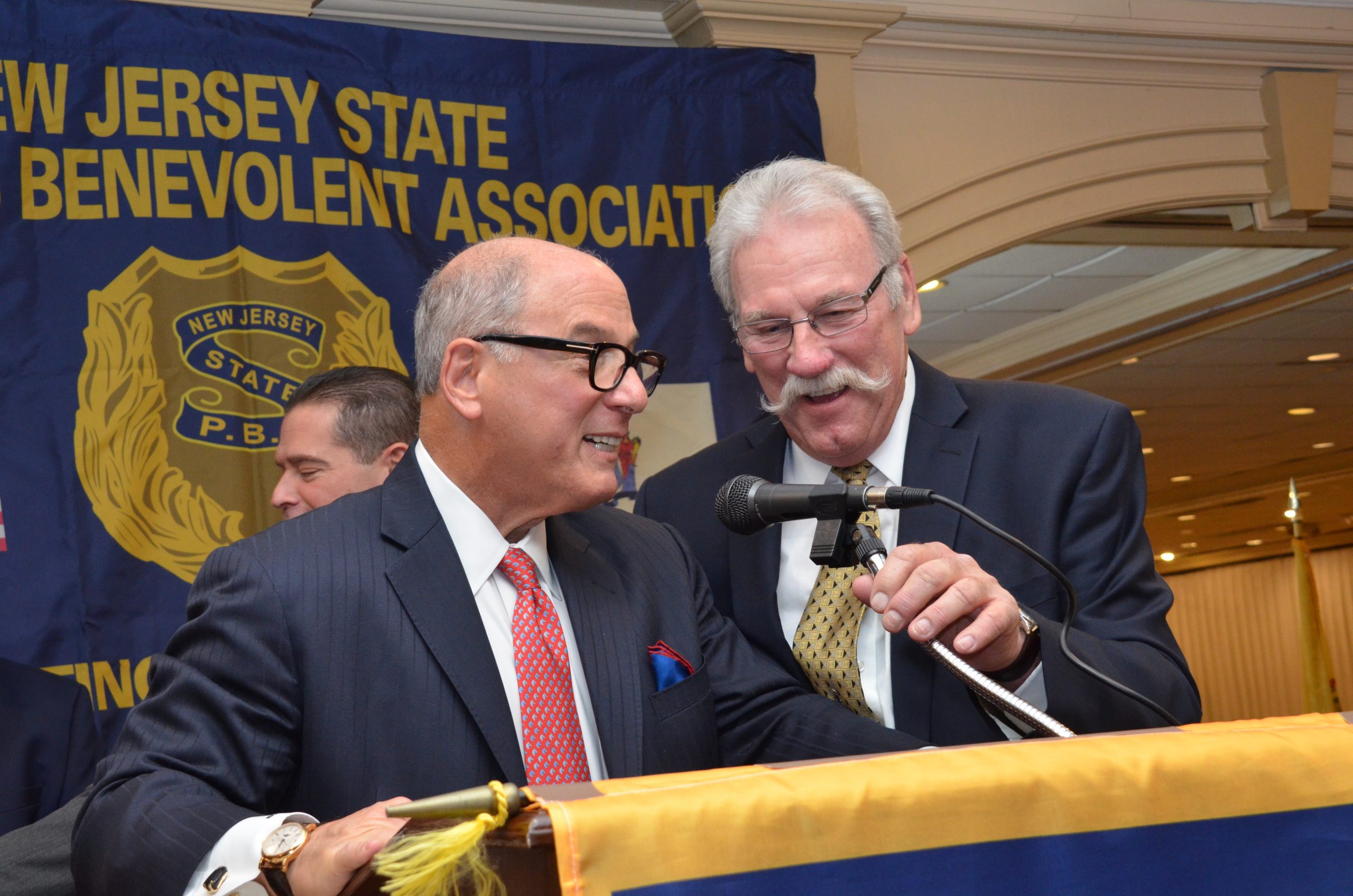 Few people knew how gracious Steve was like Chrissie Maihle did. As the Flemington inventory control manager for 32 years, she saw how much he loved having his desk in the middle of the showroom rather than hiding in some office. She saw how he knew the names of most of the customers who came back so many times.

Maihle talked to Kalafer a few weeks before he passed. Her dog had just passed away, and even though Steve was thick into his fight, he called Chrissie to say how sorry he was.

“That touched me because of everything he was going through and still took those few moments to reach out to me,” she added. “He made you feel like you weren’t just an employee. When I suffered personal tragedy, he made sure to call me. Not every night, but every other night. He made you feel like family.”

Kalafer knew how to go above and beyond. When Sheehan’s daughter was getting married, he bought two special glasses and brought them to the wedding. With those, they shared a private toast. They did likewise at each of their kids’ weddings with those same glasses.

In 2018, the PBA needed that new truck for its new trailer. Colligan picked up two dozen more doughnuts and went to see Steve. The PBA needed a top-of-the-line, Ford F-350. Colligan wanted to partner on the deal.

“He said, ‘No, we will order it,’” Colligan recalled. It took a little more than 10 minutes this time around, but Kalafer didn’t hesitate. Thinking back on that moment, Colligan realized what made Steve Kalafer Steve Kalafer.

“I’m not sure members know just how much he loved us,” the PBA president accentuated.

Rest in peace, Steve, knowing that you will always be the PBA’s best friend.