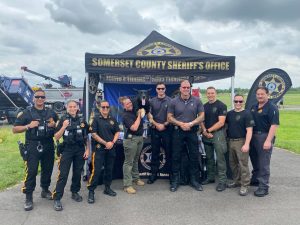 PBA fever spread through the Somerset County Sheriff’s Office in late 2020. Feeling an information and support blockage from their collective bargaining representation at the time, officers seized an opportunity to leave the order and feel the value and virtues of the NJ State PBA.

The rank-and-file officers formed Somerset County Sheriff’s Officers Local 272 in the spring of 2021, and the we-got-your-back prowess of the PBA suddenly made doing the job a lot more comfortable. Safer. More productive.

A definitive majority of votes came in to move from the FOP to the PBA, and thus Somerset County Sheriff’s Officers Local 272A was born. The SOA has created an all-in-one unit and an all-for-one fervor that will bring the entire Local an unprecedented wave of benefits and benevolence.

“I think it’s going to be a huge benefit to have both the supervisors and the sheriff’s office under the same roof because we can work together on a lot of fundraising activities and just help tighten the organization as a whole,” Local 272 State Delegate Alan August noted.

The first year of PBA membership apparently made a lasting impact on Somerset County sheriff’s officers. A handful of officers were PBA members before becoming supervisors, and their experience no doubt helped push the opportunity to PERC for the SOA.

“Since we’ve been in, we’ve really been so happy,” August continued. “It’s very good for the camaraderie, as well as just learning all the information that needs to be passed down to help officers with their everyday planning with their duties and responsibilities.” 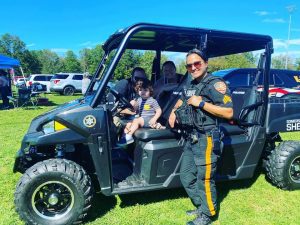 Among the handful of members who became supervisors in the past year and had seen how the other half lived was Sergeant Karissa Hahn. After being promoted and having to go back to the other union, Hahn helped look for the opening to get the SOA to go PBA. When their contract neared expiration, the opening came.

“The majority wanted to move on with better representation,” Hahn explained. “So it definitely feels good. I’m happy about the new chapter of life in here.”

The move was prefaced, of course, with the NJ State PBA coming to the sheriff’s office to make its renowned detailed presentation about all the benefits it offers. For more than two hours, officers listened and then peppered PBA leaders with questions that revealed even more reason to move on from previous representation.

“It was fantastic presentation. Everything was just…It felt like a brotherhood,” Hahn added. “It felt like we could really support each other in ways that we did not have for years. I think that’s better for everybody, especially the new generation coming in.”

Of course, the PBA affiliation and representation will have an impact on how all Somerset County sheriff’s officers and supervisors will be able to do their jobs. And that only begins with the fact that, from a labor perspective, they can all row in the same boat.

Local 272 is up to 37 members, and that will increase by three with the graduation of the next academy class in the county. Add in the 14 members of the SOA, and the Somerset County Sheriff’s Office will feel a force that is perhaps the most needed commodity to successful law enforcement.

“To me, it’s the support,” Hahn submitted. “When you feel like you’re not supported, you’re going to be a little bit more hesitant to do your job and do it correctly. When you have the support, you walk into work and you’re like, ‘This person has my back. We have good communication with your union, and we’re strong like that.’ If you don’t have that, I think it breaks you down as an officer.”

Local 272 members and superior officers also see the strength in PBA numbers making an impact on fundraising and interacting with the community. When the officers formed Local 272 last year, they were able to put together a softball tournament that attracted eight teams from countywide law enforcement and PBA Locals to raise funds.

August indicated that event is in the works again. Sheriff Russo added that the Local and SOA hopefully will combine on a pig roast fundraiser, perhaps as soon as June. That event might take place in Franklin Township, where Russo was on the job and was a longtime Franklin Township Local 154 State Delegate. 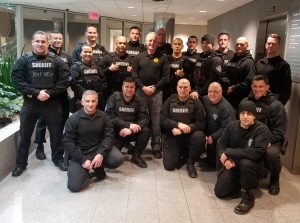 Hahn anticipates that the number of members between the Local and the SOA will lead to more opportunities for officers to get involved in community events. She hopes that will include events in the LGBTQ community that she is a part of.

The new Local 272A will also be holding elections for officers in May or June. Because Hahn took the lead on moving the supervisors to the PBA representation, there are many, including August and Russo, who believe she would be a great Local 272A president.

If she is elected to the position, Hahn certainly will have a great local resource to help the Local. In addition to serving as a State Delegate, Sheriff Russo also indoctrinated a certain PBA president into union service, and Pat Colligan succeeded him as the Local 154 delegate.

The sheriff joked that the PBA presence might be a more formidable force to negotiate collective bargaining agreements than it might have been if there was no change.

“Then again, I coached Colligan, and I know his playbook,” Russo quipped. “But this is really best for the officers. They’ve got to do 20 or 25 years on the job, and this is the networking they need for their jobs to get them through to retirement.”

“They can feed off each other, which will make them better professionally and lead to better performance,” Sheriff Russo praised. “They will be able to work better and work smarter. They will be better protected. That will make them more comfortable and able to do a better job.”