Inaugural Cigar Gala shows that where there’s smoke, there’s support for the PBA and its members

Convergence on the massive tent out front of the Crystal Springs Resort on May 18 reminded of an old-time religious revival. NJSPBA members, their guests and devoted backers of the blue lined up to experience a taste of what would be a revitalizing and rewarding experience.

Several members from Burlington County Corrections Officers Local 249 made the two-and-a-half-hour drive to Hamburg to be here. Atlantic City Local 36 State Delegate Matt Rogers brought a group. And retired member Bob Obsuth chartered a bus to drive members from Ocean County, where he once served as county conference chair. 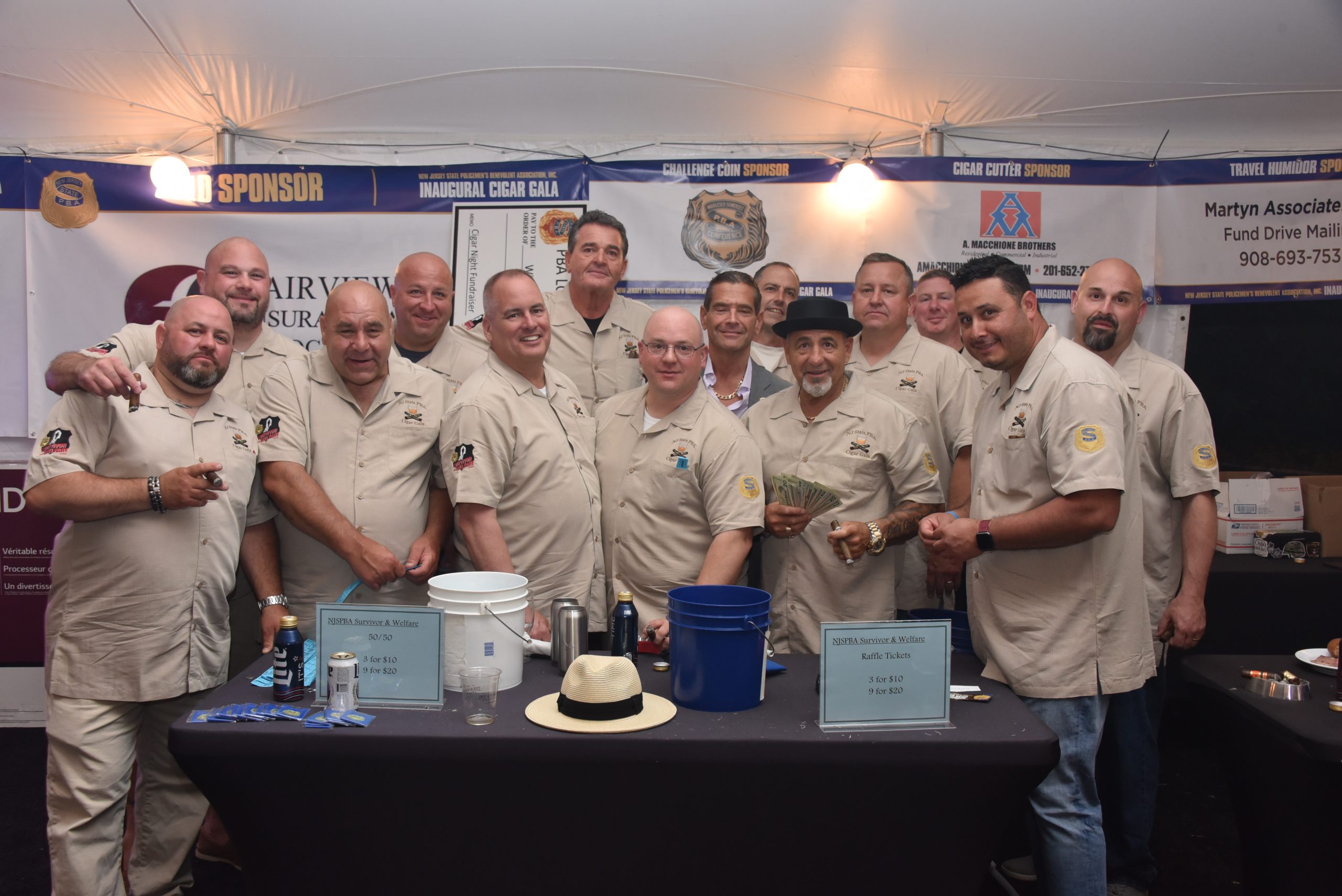 Nearly 500 people gathered at Crystal Springs for the Inaugural Cigar Gala to benefit the NJSPBA Survivor & Welfare Fund. The largest law enforcement cigar night ever in New Jersey – maybe in the entire country – turned out to be a revival in every sense of the word.

Inaugurated to help the Survivor & Welfare Fund replenish its reserve after providing so much for the families of 14 members lost to COVID in 2020 and the hundreds of others who suffered through the virus, the gala was a success beyond even the wildest dreams of co-organizers Somerville Local 147 State Delegate Vito Spadea and Dunellen Local 146 State Delegate Joe Dudley. NJSPBA President Pat Colligan announced that the gala raised nearly $120,000, which will go a long way toward refunding the nearly $500,000 provided to the fallen and afflicted.

“This definitely says something about our membership,” Colligan complimented. “And it says something that we all needed to get out, see people without face masks and enjoy a drink and a good cigar.” 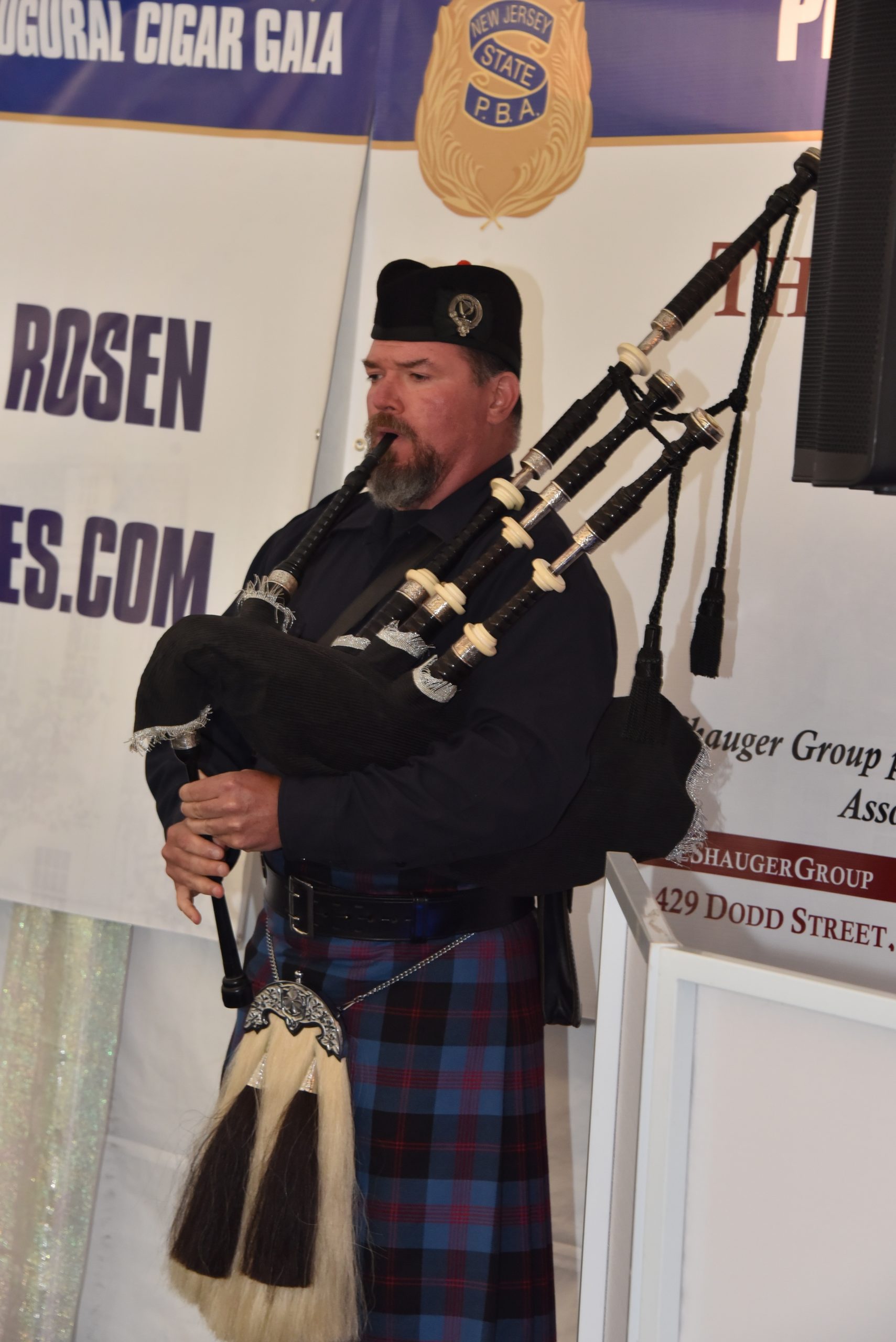 Smoke signals of members and sponsors embracing and enjoying the event could be seen for miles. The tent was lined on three sides with banners of sponsors who stepped up, including platinum sponsors Jeff and Debbie Rosen of Lending to Heroes, Joe Ablahani and Eric Murtha from Capital Benefits and the team from the Shauger Group, Inc.

The presence of a lone bagpiper playing a set while walking the perimeter of the tent just like the midnight piper does at the National Law Enforcement Officers Memorial during National Police Week added to the honors. And underneath the aroma of sweet cigars, it wasn’t hard to see how the room was filled with, well, love.

“You can just tell everyone’s happy with the smiles on their faces,” NJ Transit Local 304 State Delegate Brian Rei noted. “It really makes you realize how many people are appreciative of the work we do every day, and it makes us realize we need to take care of each other so we can take care of everyone else.”

This was even more than Colligan, Spadea and Dudley imagined when they lunched at a diner during the height of COVID nearly a year earlier –under a tent, ironically. Even several weeks before the event, there was still some question about the turnout.

One of the gifts members received was an ammo can. The PBA ordered 400 to give out, thinking that might be too much. More than 100 additional gifts had to be ordered to make sure everybody who attended received one. 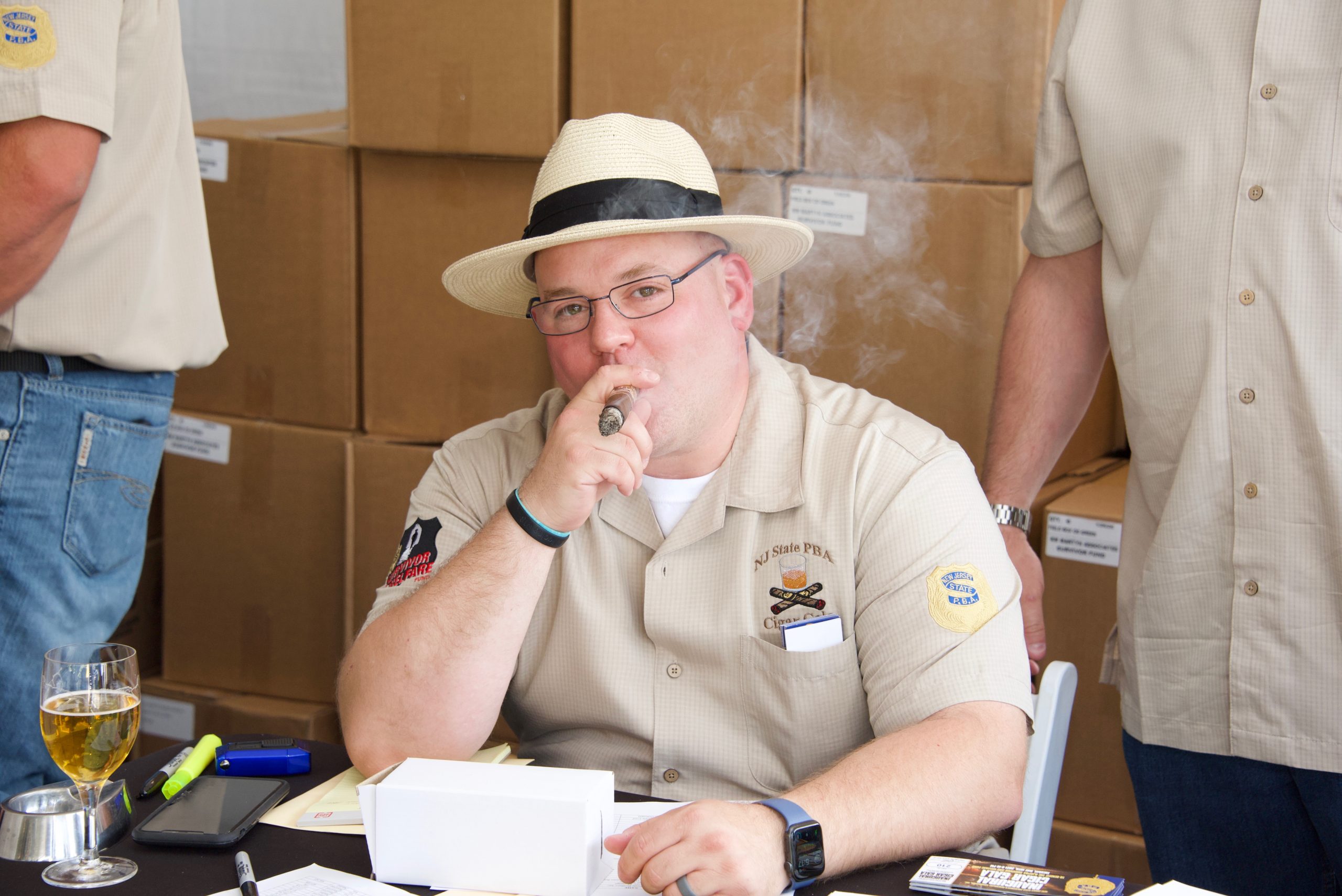 The participation and fundraising success certainly catapulted the cigar gala into the stratosphere of other transcendent events the PBA has orchestrated. Like PBA Day at the state legislature in Trenton, the annual Collective Bargaining Seminar, PBA Day at Tice’s Shoal and the growth of the Mini and Main conventions, the union continues to serve up heaping helpings of advocating for members, educating them, generating support from the business community, fundraising and promoting the good and welfare.

“Events like these allow us to decompress, talk to other members going through the same issues, raise money for a great fund and bring all the Locals together,” North Plainfield Local 85 President Mark Constantino related as he soaked up the reveling of cigar night. “I think members need to realize the PBA is here, not to hurt us, but to help us with anything on the job or off the job.”

Clearly, it was one of those nights to admire the prowess of the PBA. As Ablahani gave it his highest rating as one of the best events he’s ever been to, he praised, “These guys are all about togetherness, the unity. When they say they are all blue, they don’t lie.”

Elected officials and high-ranking supervisors also made the scene and the impact of what transpired was not lost on them. Montclair Deputy Chief Will Young said, “It’s like a big family reunion.” 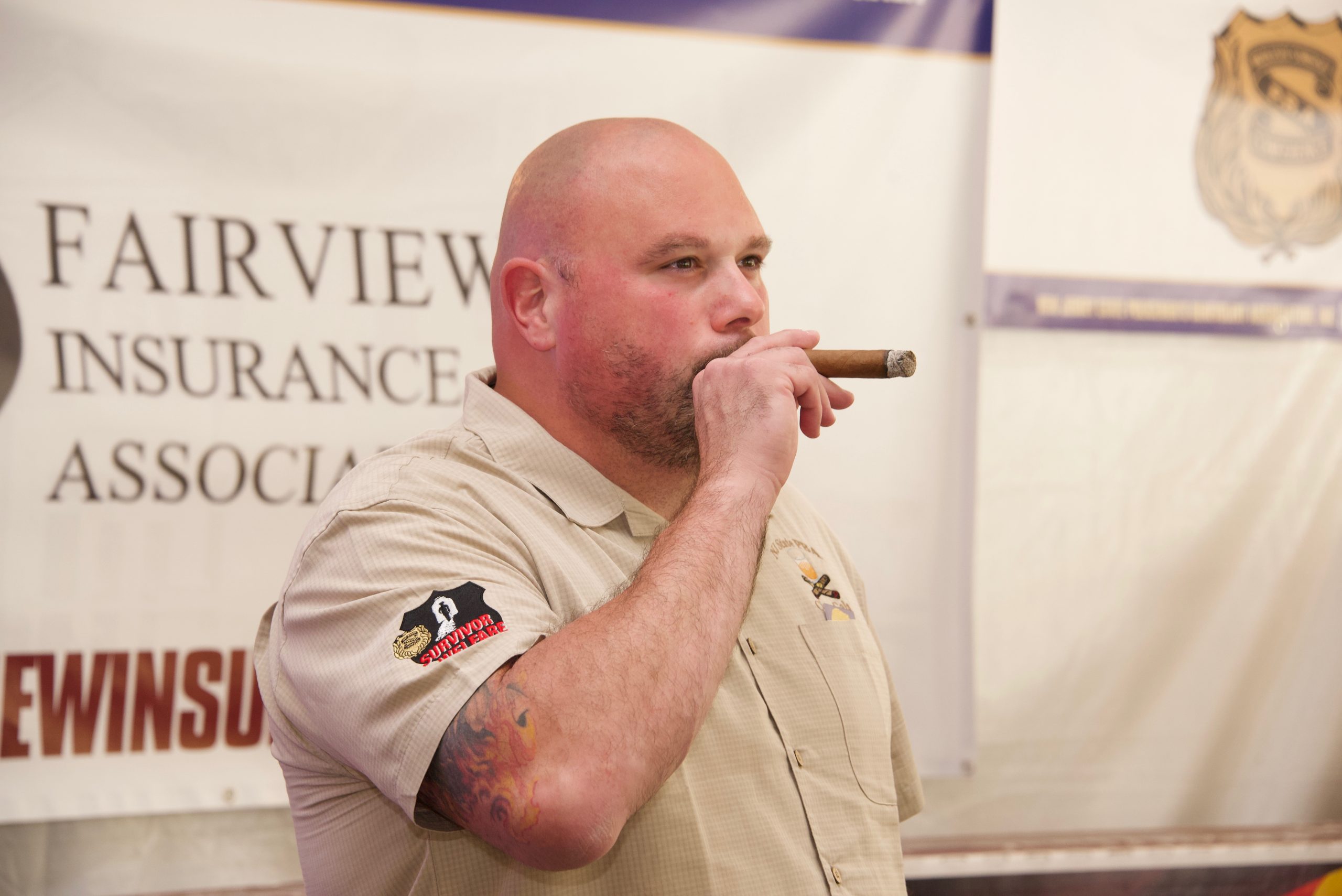 And Somerset County Sheriff Darrin Russo beamed with pride as he enjoyed one of the hand-rolled headliners that injected so much flavor into the gala. Russo is the former Franklin Township Local 154 State Delegate who was also the FTO for a certain PBA president. Russo recognized what added to the uniqueness of the event.

“Pat and [Executive Vice President] Marc [Kovar] have never forgotten where they came from. They have brought a lot of love to the PBA,” Sheriff Russo added. “The sadness of it is that we really needed this night with what happened due to COVID. But when people come together like this, it really says a lot.”

Members who were there – and even those who weren’t – will revel in the presence of elder statesman who attended like Joseph M. Sanzari, the patriarch of one of New Jersey’s most respected and philanthropic construction companies. A former union man – he started his career as a member of Operating Engineers Local 825 – expressed great pride in being a gold sponsor for the cigar gala.

“I have a lot of respect for law enforcement because when we need them, they’re there,” Sanzari shared while finishing up a bit of the grand buffet dinner Crystal Springs cooked up. “People have to realize that they’re out there for us, and they should thank God that we have law enforcement like this in this state with Pat and Marc and the PBA.”

For some, cigar night was a comeback not just for Survivor & Welfare, but for the PBA way of life. 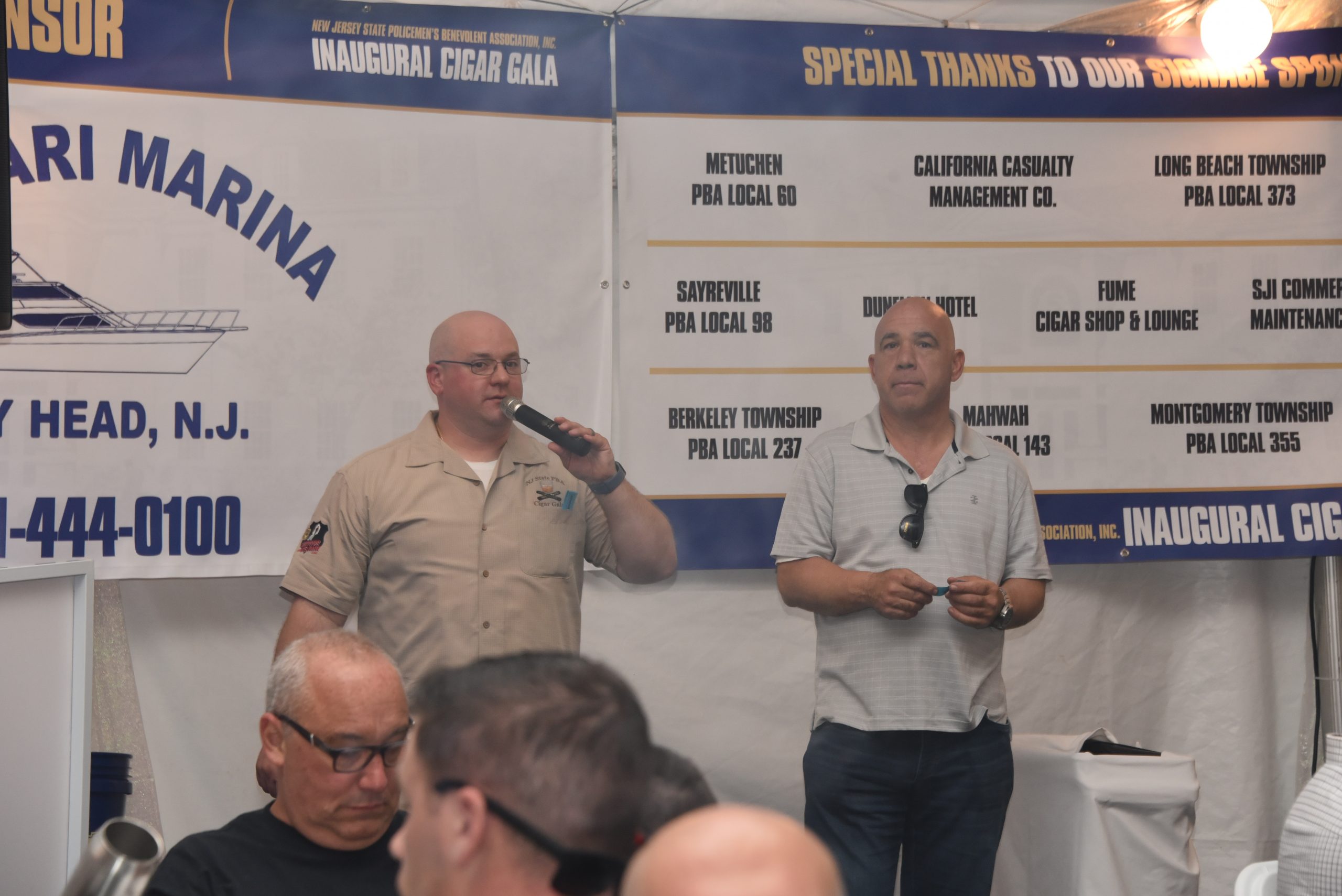 Denville Local 142 President Joe Morgan added that being with all your brothers and sisters and puffing on a good cigar was “A great way to let off a little steam.”

And as the cloud of smoke began to lift, it was not hard to put into perspective why this night meant so much to PBA members. First and foremost, it revived the Survivor & Welfare Fund they all pray they never need but cherish that it is there.

“Fellowship, brotherhood, what more can you ask for?” Sussex County Local 138 State Delegate Mickey Kaylani asserted. “To be out and be together, it’s a great morale boost. You know we all have each other’s backs.”