The Power of the Ride 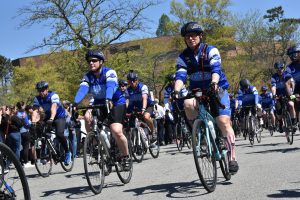 Hundreds of police officers from across the state and country gathered on May 9 for the Northern New Jersey Chapter 1 Police Unity Tour departure.

United States Customs Local 324 member Robert Cacioli remembers the first time he rode into the National Law Enforcement Officers Memorial in Washington, D.C., with the Police Unity Tour six years ago. Cheers and applause erupted from the thousands of family members and friends waiting to greet him. Tears welled in his eyes.

“The first time I rode in was the first time I ever actually just cried,” Cacioli reflected. “At first it seemed like for no reason, but then I realized where it was and what it was all about. And I was like, ‘OK, yeah, I don’t feel bad about shedding a tear or two.’ It really is a very emotional moment when you roll in.”

As he prepared to depart for the 2022 Tour on May 9, Cacioli and more than 500 law enforcement officers from across the state and the country gathered at the Hilton Parsippany for the Northern New Jersey Chapter 1 departure for the 26th Police Unity Tour. The first full ride since before the pandemic certainly captured what Cacioli and all riders had come back for.

“It starts out as just something you want to do once in your career, but once you do it, it just becomes part of you,” Cacioli continued. “Now I do the Tour because it’s become part of who I am. At work, we bid for jobs. I actually bid around the Tours so I know that I can get here every May.” 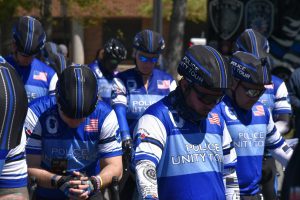 Officers participating in the 26th Police Unity Tour began their four-day journey with a prayer.

Riders gathered by 8 a.m. for the Chapter 1 departure three hours later. They prepared for the four-day journey that would lead them 300 miles to D.C. Some officers were riding for the first time and anticipating what has been described as the most emotional moment of their career.

Loyalty to the cause, dedication to the brotherhood and love for their fallen brothers and sisters brought these officers together for the Police Unity Tour.

“I think it’s all about showing respect to the families, the surviving families,” commented Belleville Local 28 member John McAloon, who was making his sixth ride. “We have to let them know that no matter what, we’ll be here on that day to show our respect for them, for the sacrifice that their loved ones gave, not only for us, but for the citizens of this country.”

Prior to the departure, Police Unity Tour founder Pat Montoure reminded riders of their great responsibility in taking on the Tour.

“We got to continue the honor of blue by making sure that we represent the best in life,” Montoure related. “Without you, the memories of the fallen would be forgotten. So take their memories with the bracelets on your wrists. Take the heart that you know that you have and do this ride the best you can.”

NJSPBA President Pat Colligan, who has made the Tour several times, added some words of encouragement to the officers before they departed. The scene was so inspiring that it even made Colligan feel like getting back on a bike right then and there.

“I come out here and I see everybody in blue, and I miss the Unity Tour,” Colligan expressed. “Maybe I have one more year in me, we’ll see. But on behalf of the State PBA Executive Board and Executive Vice President Marc Kovar, ride hard, ride strong. We will see you in D.C.” 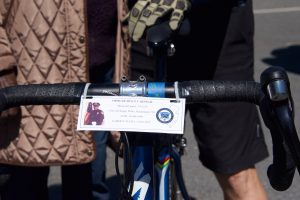 Officers posted photos on their bicycles of officers killed in the line of duty, including Orange Police Department Local 89 Inspector Joyce Carnegie, who died in 1999.

Hundreds of officers moved into position for the departure, each wearing a blue bracelet embroidered with the name of a fallen officer. Some carried flags or posted photos of a fallen officer on their bikes as symbols and reminders of why they ride.

Each officer had a story of who they were riding for. Like Clifton Local 36 member Gabe Zirpolo, who rode in honor of Local 36 member John Samra, who was killed in the line of duty in 2003.

“Every year, we ride for him,” Zirpolo related. “And we carry a flag for him.”

When Zirpolo has arrived at the Memorial the past five Tours, his first stop has always been the spot on the wall where Samra’s name is inscribed. There, he retires the flag.

Officers from surrounding states, like Connecticut, and across the country as far as Washington, gathered with their fellow officers.

Hartford Police Officer Sid Palmieri has ridden the past five Tours in honor of the seven officers his department has lost. And Palmieri plans to continue riding the Police Unity Tour even when he retires.

“We’re here for the same reason,” Palmieri remarked. “For those fallen officers and for those families down in D.C. waiting for us. I see the families once a year to show that we are going to continue doing this and to show our support for them. This is why we ride.”

Although there are challenges, like cold rain and strong wind, that the officers may face along the way, they often think of those who have gone before them. Those memories are what push them forward to continue persevering despite feeling exhausted at times.

Bergen County Sheriff’s Department Local 134 member Nicholas Haggerty finds his source of loyalty and tremendous affection for the Police Unity Tour in the memory of Jersey City Detective Joseph Seals, who was lost in the line of duty in 2019.

“It’s knowing who you’re riding for,” Haggerty revealed. “Every day you ride and pedal, even when you’re hurting, you just think of those names on the wall and that you’re doing it for them. It’s not about yourself.” 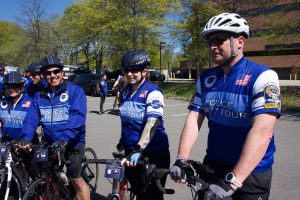 Hartford Police Department members from Connecticut joined the Tour to ride in honor of seven police officers who were lost.

Anticipation rushed through officers who were joining the Tour for the first time. Bloomingdale Police Department Officer Alexandra Morse, who has been on the job since last September, was compelled to ride after her department lost Officer Gary Walker to COVID in 2020.

Morse had heard about the grandeur of the ride and the emotional moment seeing the Memorial for the first time, which is what she was looking forward to most.

“I heard it’s very emotional to ride into the Memorial, so I’m excited about that,” Morse related as she prepared to ride. “And I’m looking forward to the camaraderie and bonding with the guys that have a lot more experience and seeing what I can learn from them throughout this journey.”

Lakewood (Washington) Police Department Sergeant Mark Eakes first rode 10 years ago after four officers were killed in the line of duty. He still remembers the deep connection he first felt when sharing stories with officers all over the country about those they’ve lost.

Being a part of the Police Unity Tour has been an incredible experience for Eakes.

“It’s a life-changing thing,” Eakes declared. “Just seeing the support along the route from kids who come out, firetrucks and helicopters flying above us. It’s pretty chilling and heartfelt.”