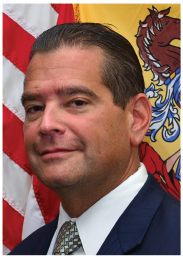 Law enforcement officers work in a dangerous career. We signed up knowing the dangers that exist at any given time throughout a working day. Just last week the FBI lost two agents— Laura Schwartzenberger and Daniel Alfin, who each dedicated years to investigating crimes against children- during an operation in Sunrise, Florida. Three additional FBI agents were shot during the same incident and had to be hospitalized.

The murderer, identified by the FBI as 55-year-old David Lee Huber, was found dead on the scene. Most news outlets covered the ambush of the FBI agents for only a few days afterward.  Sensationalism and violence seem to attract viewers, readers and listeners.

Just as predictably, the coverage of the heroes who lost their lives quickly faded into the almost exclusively unfavorable inquiries we have come to expect as members of law enforcement in New Jersey. Pension obligations, salaries and benefits for law enforcement make the news time and again as some sort of unnecessary or extravagant expense for taxpayers to bear. Until another one of our brothers or sisters is praised for their heroism for rushing a building with snipers actively shooting at random or we become the victim of an ambush.

Far too often we are either depicted as heroes or villains, with no in-between. And that is simply wrong. All law enforcement officers know that each day they go to work they have once again made the choice to protect communities, potentially at the expense of their own health and safety.

We celebrated Law Enforcement Appreciation Day on Jan. 9, but the sacrifices made by the men and women in law enforcement are 24-7-365. I wish the media would take some responsibility for its active role in depicting our members and their sacrifices as somehow just numbers on a ledger. A balanced approach could have a positive impact not only on the men and women of law enforcement, but also the communities we serve.

Of course, that is a naive thought as we continue to deal with news outlets and reporters who already have their storyline and anti-law enforcement bias baked into their reporting by the time they contact NJSPBA President Pat Colligan for comment.

The circumstances of the most recent interaction with a Gannett reporter, like so many of the other stories Gannett continues to write about New Jersey law enforcement, begins with a negative bias against police. In questions sent to the NJSPBA, the reporter communicated the belief that officers on assignment working security at a bar can become corrupt and that officers working security at a construction site are an “unnecessary expense passed on to the public.” With that continued inherent bias it becomes simply impossible to take this reporting seriously or with any integrity.

As President Colligan and I stress time and again, compensation for law enforcement is negotiated fairly often over many years. New Jersey is well-known its cost of living being ranked among the highest in the country. Our members proudly work around the clock, protecting streets and neighborhoods as well as jails across our great state. We work holidays. We work in all weather and for almost a year now have been working during a global pandemic.

But members of law enforcement also know that whenever some newspaper needs to boost its digital presence, we can expect to be dragged through the mud and used for a headline. Our members are charged with the very great responsibility of protecting local communities and the families that live there. We serve in a profession where every day we leave the house there is a potential to be confronted with great risk to your safety while facing down the possibility of death, assault and conflict.

President Colligan and I will never apologize for what our members earn, just as we will not back down from protecting our members against unfair mischaracterizations and unfounded presumptions of corruption while labelling us an unnecessary expense.

All that being said, the most important advice that we can give is to always remember to look out for each other and take actions that lessen the chance of getting hurt or killed and increase the chances of making it home safely to your families.

Our thoughts and prayers go out to our own members, Lieutenant Adam “Chuck” Norris from the Millburn Local 34, Luis E. Andujar from Cumberland County Corrections Local 231, FBI Agents Schwartzenberger and Alfin and Capital Police Officer Brian Sicknick.  We continue to pray for all the law enforcement lives we have lost and for the continued safety of the men and women who continue to risk their lives to keep our communities safe.