Defining how vital the NJSPBA Collective Bargaining Seminar has become recently compelled Labor Relations Coordinator Michael Freeman to put it in writing. A member had asked Freeman to pen a letter to a boss explaining why union time should be granted to attend the 2022 seminar Feb. 8-10 at Harrah’s Resort in Atlantic City.

An excerpt from that document reads:

The PERC Act declared as the public policy of this state that the best interests of the people are served by the prevention and prompt settlement of labor disputes seeking to promote permanent employer-employee peace and the health, welfare, comfort and safety of the people of the state. The attorneys that make presentations at the seminar are all considered to be among the best in the field of public-sector labor relations.

The one thing they all have in common is an adversarial approach that is cooperative rather than antagonistic. We strive to teach our attendees methods of negotiating and advocating that stress the importance of reasonableness. Our interactive sessions that detail the role of the union representative in disciplinary matters, critical incidents and contract negotiations serve experience that the members of the Local can draw upon.

Prompt settlement of labor disputes…permanent employer-employee peace…approach that is cooperative rather than antagonistic…importance of reasonableness.

These watchwords not only define how important attending the Collective Bargaining Seminar has become but how collective bargaining has evolved to so much more than procuring maximum salary increases. Negotiating tactics like banging fists on tables and in-you-face finger-pointing don’t move the ball anymore. Having opposing attorneys argue about what happened at PERC or how PERC has decided something doesn’t necessarily benefit the Local or the township because an agreement has to work for both sides. Otherwise, there won’t be an agreement.

So these pages attempt to put it in writing what the Collective Bargaining Seminar has evolved to.

“We’re not trying to teach members how to F the town,” articulates Artie Cronk, the Manchester Township Local 246 State Delegate and PBA Collective Bargaining Committee chair. “We’re educating the men and women in that room as union leaders how to be better negotiators and how to be communicators with the township and the counties. We’re trying to be ahead of the issue before the issue comes so you have a game plan.” 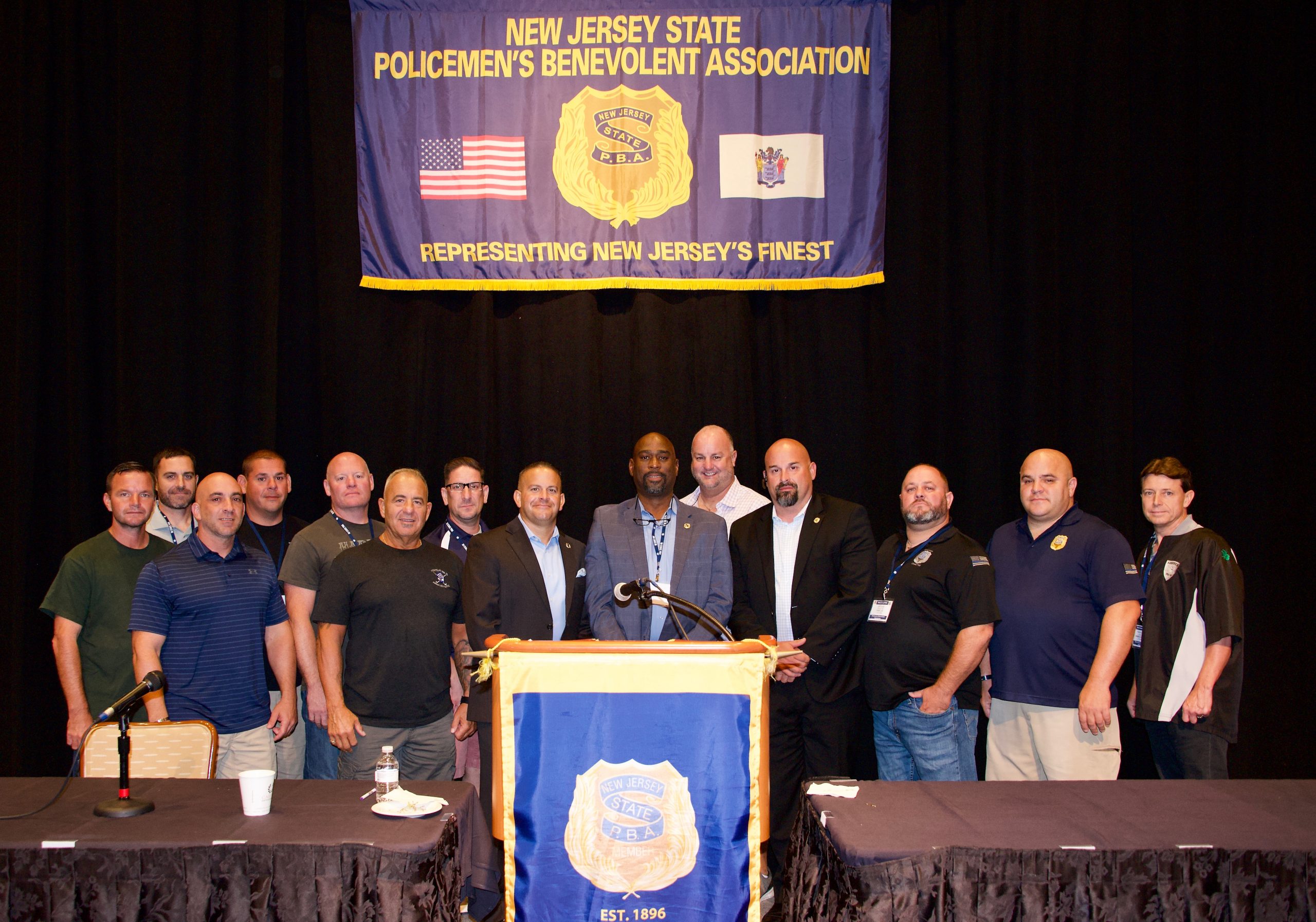 The NJSPBA collective bargaining committee communicates with members throughout the state for input about how to bring the most timely information to the seminar.

Important part of the process

Cronk recently invited Manchester Township Chief Robert Dolan to attend the Collective Bargaining Seminar, even just for a day. Cronk wanted Dolan to get a sense how the PBA is acclimating members to the ever-evolving labor relations landscape. It is an exclusive offer to see the dissemination of knowledge about how to not only reach a successful collective bargaining agreement, but how to administer and abide by all the aspects of the contract.

What everybody who attends learns is that the expert presenters Freeman referenced have been asked to take the podium because they stay on top of the latest and greatest information. Attorney Jim Mets of Mets, Schiro & McGovern, LLP has presented for more than 15 years and has seen how the seminar has changed with the times.

“Just the level of material that is presented has gotten more sophisticated each year, as well as the attendees,” Mets notes. “Some employers ask, ‘Well, why would I pay them to go to a PBA event?’ You’re releasing them to go because they come back educated about how to deal with labor management relations. They get this knowledge and not just negotiations knowledge. It’s how to interpret a contract, grievances knowledge, dealing with disciplinary matters and all the stuff that makes them an important part of the process.”

The past few years, the collective bargaining seminar has matriculated to enabling members to be more than just the adversary across the table. They learn how to navigate labor relations to the point where they might not need an attorney and actually mitigate the contentiousness and anxiety that comes from both sides in such relations.

“Members have become a good cog in the machine of labor-management relations,” Mets adds. “Someone who gets educated through the collective bargaining seminar might know to tell a member, ‘Wait, you don’t have a grievance here based on what I learned.’ And if you do understand, it also lends credibility to the union because when the PBA takes meritorious cases forward, the employer respects that.”

A significantly credible confirmation of how the seminar has evolved comes from a former NJSPBA Collective Bargaining chair. Executive Vice President Marc Kovar served that role for several years and has participated in planning and elevating many of these seminars.

He has seen how information presented at the seminar has helped Locals save $20,000, $30,000, $40,000 or more in costs by learning from an attorney how to handle an issue it is facing. When hearing the seminar characterized as a survival guide for all members, Kovar confirmed that it has become that and more. 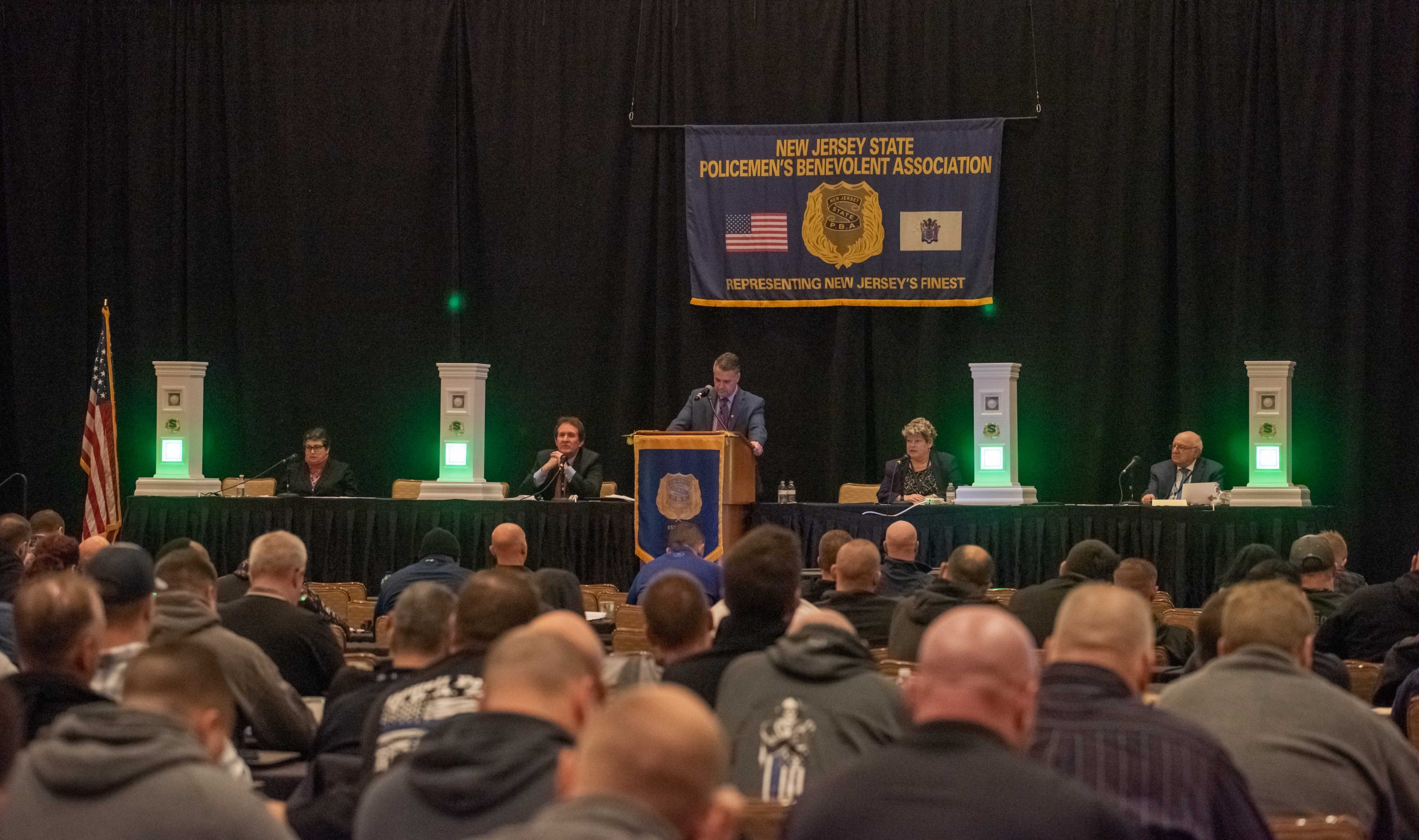 We all need to be on the same page

As simple and even cliché as it sounds, the peak of labor relations and, consequently, the outcome of the attending the seminar is for labor and management to get on the same page. All the clichés apply because they are true: A successful resolution to any collective bargaining issue should be a win-win. A good tradeoff is one that helps both sides.

So if members can participate in those two and half days, they will get a basis of what’s legal, what’s proper and what’s normal. That’s the technical evolution and that’s what is needed to co-exist with management to achieve the win-win of labor-relations serenity.

“There is compensation in there, but there are terms and conditions with safety and working conditions that are important to our members,” Freeman reasons. “Of course, the job has to be done and the public has to be respected and they have to pay for it. So we all need to be on the same page.”

The wake of attending the seminar in its present iteration enables some labor-management relations to transpire without necessarily bringing in an attorney. If it’s an IA or something similar, then a member will have that representation. But there is a lot of progress that can be made on contract-related matters affecting working conditions that don’t need to begin with attorney presence.

“It’s in the best interest of the Local to further the relationship between the union reps and the decision-makers by doing it personally, and the members can do it because they have seen it, they’ve talked about it and they’re not intimidated,” Freeman adds about the seminar’s application. “And if a Local can get in there and talk one on one with the decision-maker and make a case for a member in a situation that’s going to affect the entire membership going forward, I think that’s huge.” 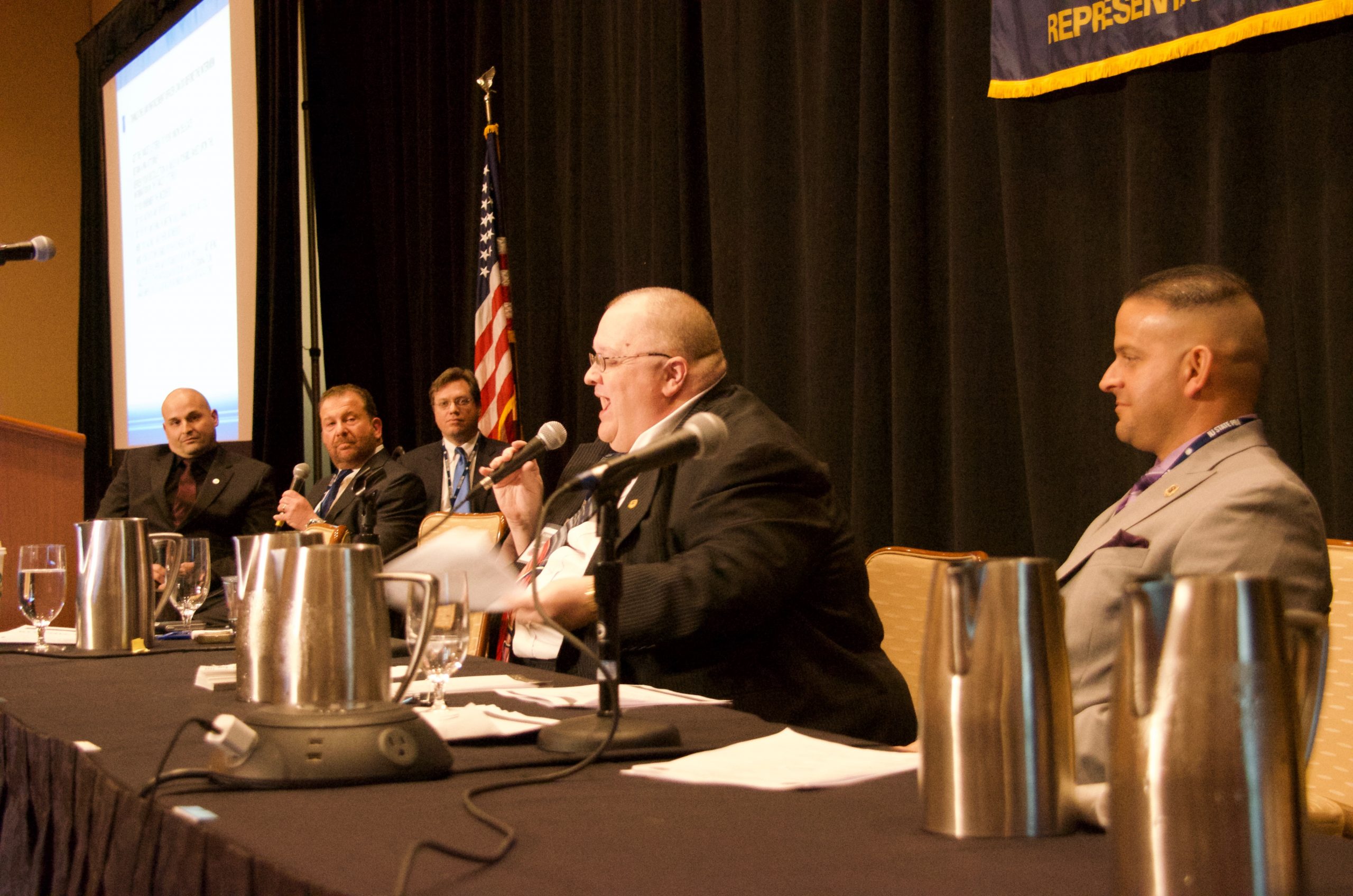 Stuart Alterman, left, and Arthur Murray have conducted a mock hearing during the past few collective bargaining seminars to help attendees better understand the IA process.

This is how you get it done

Evolution has spawned innovation to seminar sessions that have spiked retention of critical information. In 2019, the seminar featured the Red Light/Green Light Interest Arbitration

Panel in which actual arbitrators in the state of New Jersey heard actual cases and rendered their opinions by turning on a green light for ruling in favor of the employee.

The past three seminars have also included a mock IA hearing with PBA attorneys filling the role of representing both the member and the department or township. And in 2021, Mets’ partner, Leonard Schiro participated in another other great brainstorm. Alongside attorney Jonathan Cohen, they exchanged a point-counterpoint in “Advocacy – Union & Management,” a session to present the union and management sides to many of the current issues.

“The attorney general’s guidelines put a lot more enforcement powers on the prosecutors’ offices, so we want to see how they’re going to handle it and see other thoughts about how they handle discipline, how they handle notifications and what their stresses are,” Freeman explains. “Last year, having Prosecutor Onofri there was incredible because he laid out an absolute plan about how his office handles the Brady-Giglio-impaired officer, and that’s not universal.”

The State PBA conducts considerable discovery to find ways to evolve and upgrade the seminar agenda. Labor relations committee members canvass county conference meetings to hear about members’ needs. Freeman relates that he will get a call about something happening in Warren County one day and then another the next day about the same issue in Middlesex County. He will also see it come up at something like a chiefs’ association or NJ League of Municipalities conference.

Subsequently, a quick group text goes out for Freeman to confirm it’s a hot issue. And it winds up being added to some aspect of the seminar. Or he will address it during one of the short stand-ups he does on best practices taking place in Locals throughout the state.

It all feeds the real-world application of information – rather than straight lecturing – that has been driving the evolution of the collective bargaining seminar.

“It’s been my total objective,” Freeman declares. “It’s a chance for more members to learn, ‘This is how you get it done.’” 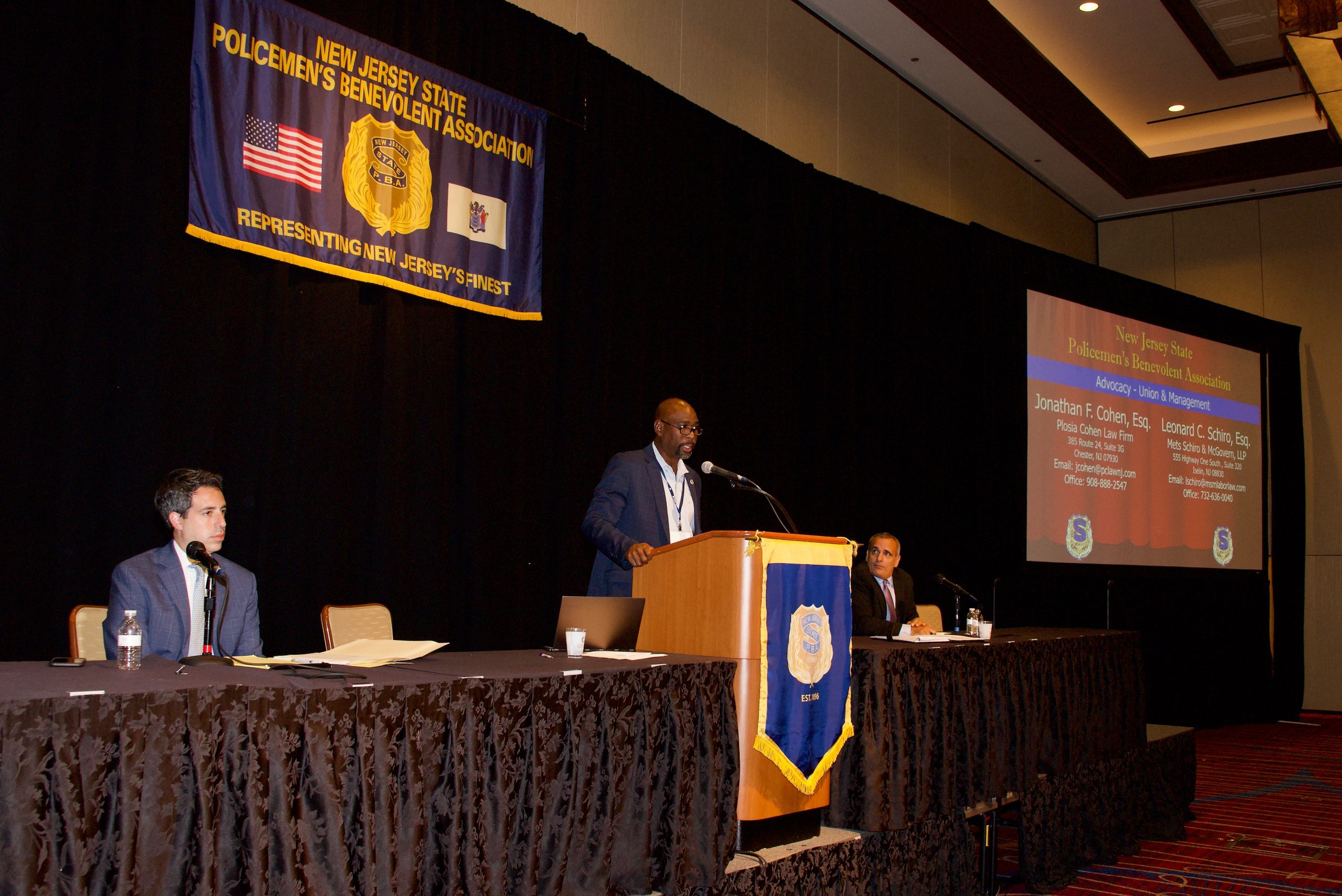 Which way things are moving

Mets astutely notes that the seminar has evolved to create an attention to detail of collective bargaining agreements. Important information is presented about the language to include because language items cannot be subject to interest arbitration and therefore should be accounted for in negotiations.

“A lot of times, management doesn’t want to deal with these issues. They want to get in, talk about economics and get done,” Mets specifies. “But it definitely sets down terms and conditions of employment for members of the Local.”

If there is a next level of evolution, Mets contends it is Locals trying to get more members to the seminar as possible. Veteran members should attend because the labor landscape continues to change, especially now from the impact of COVID on use of sick time, personal days and worker’s comp. Younger members should attend because the information available profoundly affects their future. And aspects of the contract and administering it affect older and younger members differently.

“Plus, if you’re well-educated and you go in front of your members to present proposals, you’re going to inspire more support,” Mets suggests. “They’re going to be more confident in you going to the table or going to an IA or an interest arbitration because they’re just going to have more faith in you.”

Cronk anticipates some new information coming in every presentation because of COVID. Without federal government subsidy, municipalities are trying to get members to burn their own time if they come up positive. All-in-all, though, collective bargaining, labor relations and contract negotiations have evolved to the point where members are perpetuating the power and presence of the union by attending.

“It’s about the people who have worked for years and years for collective bargaining rights that have been years and years in the making,” Cronk states. “So you should pay attention to everything that’s in it, not only so we don’t lose things or give up things, but to see what’s changing with the times and see which way things are moving.”