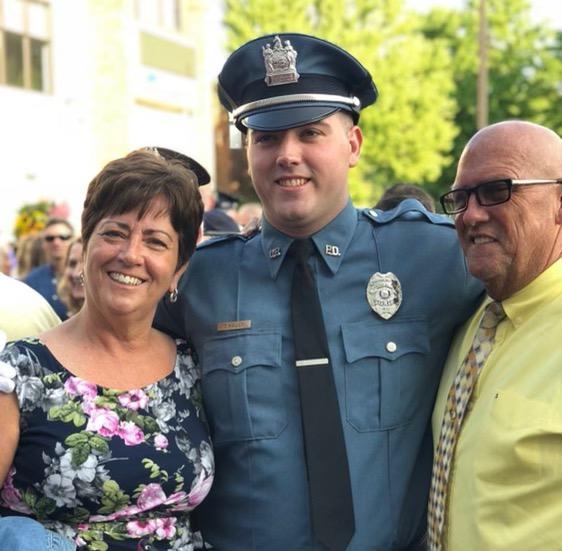 Junior always wanted to hang out at the Union Beach Police Department with his dad, Tim Kelly Sr. Junior loved sitting in the police cars and talking to the other officers.

Tim Kelly Sr. was one of the most beloved officers in Union Beach and throughout the Bayshore area. Junior was well on his way to following in his dad’s footsteps. He took over the Law Enforcement Against Drugs (LEAD) program, serving as his father did when he was a school resource officer and it was known as the DARE program.

Detective Corporal Tim Kelly was a rising star in the department, according to Union Beach Chief Michael Woodrow. But five years into his career, the 29-yearold Kelly, a Local 291 member, was lost in an off-duty vehicle crash when his Honda Civic, heading west on Route 36, struck a telephone pole just past Grand Avenue early on the morning of July 17.

“He was full of life,” Union Beach Detective Sergeant Shawn Gilkison began. Gilkison was like a brother to Kelly, who was on his squad. Gilkison’s sergeant when he first came on was Tim Kelly Sr. His best friend, Christian Belmonte, was Junior’s first cousin. Gilkison was handling hiring for the department when Junior was a Class II, and everybody in the department could not wait to get him on.

“He would bring a smile to everyone’s face that he came across,” Gilkison continued. “He could talk to anyone. He was a master mediator. The guy had the gift of gab and was just an incredible community police officer.”

Knowing the family history, Union Beach asked Kelly to get involved with the LEAD program in February. Working with fellow Local 291 member James O’Toole, they revamped the curriculum to include students from fifth through eighth grade.

But Kelly wanted to do more. He pitched an idea to Gilkison for the LEAD program to sponsor the annual eighth grade barbecue at nearby Holmdel Park. They found a way to use LEAD funds to do so.

At the end of the 12-week session, Kelly gave the graduation address that exhibited his gift of gab.

“They did an awesome job. The kids loved them, and he was invaluable to the kids here,” Gilkison related. “Tim was always thinking. He was always being progressive in the way he policed.”

Prior to taking the LEAD, Kelly had established quite a career showcasing the work he had done to complete a double major at the University of Alabama resulting in degrees in history and criminal justice. Once he came on full time with Union Beach, Kelly was assigned to many high-level special operations with the FBI, DEA, Monmouth County Prosecutor’s Office and BTF, a regional unit used for exceptional situations that require specialized tactics, strategies and methodologies.

And he appeared well on his way to achieving the stature his father achieved. Junior learned about this firsthand when he made a traffic stop one day.

Those who were pulled over in the Bayshore area often tried to get off by saying, “I know Officer Kelly.” A motorist tried this on Junior.

“Timmy was like, ‘Oh, you do. How do you know him?’” Gilkison reported. “The driver told him, ‘Well, he’s one of my best friends.’ So Timmy said, ‘Do you want to call him?’ And the driver responded, ‘Well, I don’t have his number.’ He never alluded to the fact that he was his son until he called that guy out. But that was Timmy. He could hold court with anybody. He was fun to be around.”

The posts on the Union Beach Police Department Facebook page offer a stirring tribute to Kelly. Departments from throughout the Bayshore area posted messages as well. 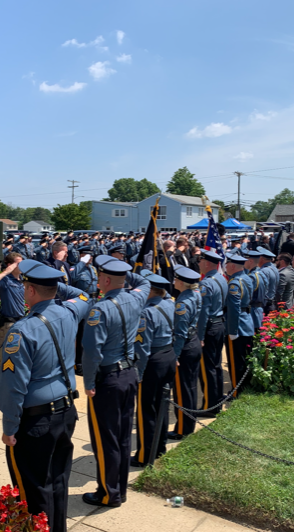 Perhaps the most riveting came from Chief Woodrow, who wrote:

Translated, the Latin phrase means “To serve and protect for eternity, may he rest in peace.”

Gilkison seemed to capture the emotions Kelly’s death sent rippling through the area. Realizing the terrible, traumatic loss, he seemed to fight back a tear when he let out, “No words. There’s no words.”

Ultimately, actions will speak louder than words. Union Beach just put a new patrol car on the road with the number 6512 to follow in sequence of badges.

The next car, according to Gilkison, will skip ahead and carry the number 6531. Timmy Kelly had badge 6531.

Family, friends and citizens will see that number 6531 on Union Beach uniform patches. Students will see number 6531 on top of whiteboards in the LEAD classroom and other classrooms. It will be used in a special tribute every July. “And then we can tell stories of the person Tim was and the officer Tim was,” Gilkison continued.

“And people will know to strive to be just the way he was and know what he brought to the table.”

It is, of course, natural to ask why such a talented law enforcement officer with a future that probably would have changed the world was taken so young. But it’s more likely that officers and residents will go down to the beachfront where they can give Tim Sr. a hug and share words of praise. Words like these that describe his legacy:

“Tim lived every day like there was no tomorrow,” Gilkison revealed. “He was always positive, and if there’s anything he’d want us to do, it would be to continue to live life to its fullest and make sure we take care of our own.”