Some words from Bruce Polkowitz about your pension, reinstating COLA and why it’s in the best interests of retired members to reelect him to the PFRS Trustee Board 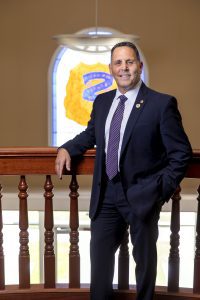 Go ahead and hold Bruce Polkowitz accountable for the Police and Fire Retirement System (PFRS) reinstating COLA for retired members. He wants that responsibility. Everything he has accomplished during his time as a PBA Local leader, department leader, elected official, school board member and top-level administrator with one of New Jersey’s biggest development companies equips Polkowitz to be in this position.

So put it on him to get COLA back. As the retired members elected trustee to the PFRS board the past 3 1/2 years, Polkowitz has pined to lay the groundwork for reinstatement. Despite what misinformation you might see posted, the PFRS Board of Trustees is making headway on the COLA highway.

And that’s the reason to reelect Polkowitz, the candidate endorsed by the PBA, the FMBA, PBA Retired Members Local 600 and FMBA Retired Members Local 500, to another term. When ballots go out beginning on Sept. 12, vote for Bruce. The continuity, expertise and relationship building he brings profusely to the board will serve to reinstate COLA. And not just reinstate this non-negotiable need, but do so in a manner that best benefits members and allows COLA to be sustained well past the time when even those just now coming on the job will need it.

Since every conversation Polkowitz has with a retired member seems to start with COLA, let’s start this reelection dissection right there. Let’s hear the straight dope from Bruce, knowing that he has to give you the truth, even if you can’t handle the truth. Other people, other groups, can present perspectives about the path to reinstatement, no matter how much fact or fiction they include.

Polkowitz is not only bound by, but dedicated to, the accountability required by being a PFRS trustee. So with that said, Bruce has the floor on the state of COLA reinstatement.

“Currently, we are finalizing the most important document the board has done since we’ve been here. It’s a memorandum of understanding to determine narrowly and specifically how money will be transferred from the Division of Investments to the PFRS.

Pause for the cause. Sometimes, you have to with Bruce, because he’s that knowledgeable, that committed, that passionate. About everything. NJSPBA President Pat Colligan muses to not pick up the phone when Polkowitz calls unless you have 30 minutes to talk.

He’s intense. He has to be, especially to continue moving forward on COLA. Considering that he can’t just say whatever he wants about the subject, like others with no intimate knowledge have in posts, Polkowitz maintains his accountability to the PFRS board.

It’s easy to make promises on social media, but Polkowitz won’t. If COLA could be turned on with the flip of a switch, he would be the first to do so. But as he strives to maintain the continuity that will come with reelection and is critical to keep the board moving toward reinstatement, here is what Bruce can say:

“As much as I would love to narrow it to a specific time frame, I cannot, other than it being the top agenda item for this Board once we receive our monies, which we believe will be before the end of this year. We have looked at some COLA scenario’s and the costs associated that would cover the largest pool of retired members. Remember, this is a snapshot we are looking at and being proactive.”

Put your trustee in

There will be more about COLA before Bruce is done here. But to understand why he is the best man for the job, it is imperative to look back on why he was elected for his first term in 2018.

The PBA tapped Polkowitz as its candidate back then because of a resume befitting a captain of industry, an executive director of a state agency, a federal legislator or a talk-show host.

He served not only as a State Delegate for Edison Local 75, but also as president of its SOA. He retired from the Edison PD as a captain and during that time fit in side gigs as an elected member of both the Edison and Franklin Township school boards. He was also mayor of Franklin Township in Hunterdon County from 2012 to 2014.

He proudly relates that as president of the board of education in Edison Township from 1995 to 2001, he was able to positively affect the lives of nearly 14,000 students and 1,600 employees serving 17 schools. The plethora of leadership positions, combined with a master’s degree in human resources training and development – essentially working with people – have given Bruce a perspective that has evolved from sitting at so many tables.

Now, sitting at the table with Polkowitz might feel like a whirlwind. He has been elected to so many offices that it seems like he is always campaigning. But that’s just Bruce – communicating, kibitzing, schmoozing, shooting the, well, you know.

He’s a guy you want to have a conversation with because he’s astute, knowledgeable and affable. And he wants to listen.

“His gift of gab, his ability to connect and relate to people, is key for him,” PBA First Vice President Pete Andreyev observes about Polkowitz.

As the PBA’s pension benefits coordinator, Andreyev has had the opportunity to watch Polkowitz work at the table with the other 11 PFRS trustees. He has seen how Bruce conducts business and, more importantly, how he takes care of business.

“I think his strength is being able to tell people his opinion in a very diplomatic way,” Andreyev continues. “You walk away from him going, ‘All right, I respect his point of view. I don’t agree with it maybe, but I respect it.’ He is a good communicator. He can talk to anybody about anything, really.”

For the past several years, Polkowitz has been working as director of development and operations for Edgewood Properties. A premier commercial and residential real estate developer, Edgewood relies on Polkowitz to combine his detective skills and diplomacy to help maintain a workforce of hundreds of people.

All of that experience has prompted another aspect of what Polkowitz believes is developing a board premium that can powerfully benefit all members. 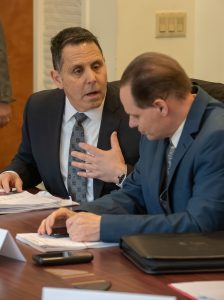 Worthy of your trustee

So what has Polkowitz been up to since February 2019, when the PFRS became independent from the state of New Jersey? Well, he has served as chair of the board’s personnel committee.

All that group has done is hire a board secretary and a full administrative staff to handle day-to-day operations. And an executive director. And a chief legal counsel after PFRS pulled its legal services away from the attorney general’s office. And a chief investment officer.

Now that the assets are coming over, the system is looking to hire another 15 staff members to handle accounting and other investment duties. If you know long it takes to hire somebody, how many resumes you must go through to find an employee who can meet this workload, well, as personnel chair, Polkowitz has been working a full-time job on top of his full-time job.

And oh yes, the board has increased funding from approximately 69 to 72 percent. Let’s do a little math on this: That 3 percent of $30 billion is about $900 million, which might go a long way toward reinstating COLA.

It’s a lot of work, to be sure. So why would Polkowitz want to continue to run at that pace when he could be stopping to smell the roses a little more?

“I want to finish what we started,” he submits. “I have the relationships, experience, product knowledge and commitment you can’t get with a new member to the board. You cannot dismiss the value of teamwork with this board. Because of the relationships I have with this board, the teamwork will be crucial to keep moving toward our goals of ensuring the fiduciary stability of the system and bringing COLA back.”

Local 600 State Delegate Carmen Brucato looks beyond the thirst for COLA when explaining why Polkowitz earned the endorsement from PBA Retired Members. Brucato knows the dynamics of how a board works, having served as a Board of Ed member for 12 years.

And he has seen how Polkowitz has been such a vital member of the PFRS board.

“Bringing in a new board member in the middle of all of this is not the way to do it,” Brucato surmises. “The only agenda the other candidates have is COLA. That’s not what it’s all about. It’s about stable life conditions so that we have a pension future. COLA is the bonus to that. Bruce has a lot of credibility. He knows the ins and outs of the political game. And that’s why we have full confidence in Bruce doing the right thing for Local 600 members.”

Andreyev concurs, knowing that the PBA endorsement is a vote of confidence in how the PFRS board has progressed and in its ability to ensure it won’t be COLA zero for much longer.

“There’s a lot of things where a guy like Bruce can draw upon that learning curve,” Andreyev illuminates. “I’d rather have someone there with experience, because this is my pension, and I don’t want somebody there who isn’t knowledgeable in the complexities of the fund.”

Colligan helped write the bill to make the PFRS independent and lobbied for it until the governor realized it had to be signed. So he’s not about to hand the PBA endorsement over to somebody who is not equipped.

“Bruce has a very keen sense of the PFRS system, and he’s made allies with a lot of people on the management side of the board,” the PBA president details. “If somebody thinks they’re going to come in and make massive changes, nobody’s going to take them seriously until they understand the system.” 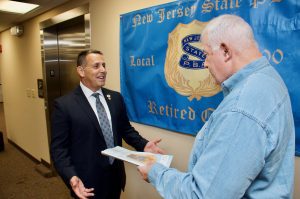 The last words, then, are left for Polkowitz to discuss what’s foremost on retired members’ minds. It’s part of his philosophy that people have the right to be heard and responded to in an honest manner.

“We’re pulling back the curtain and seeing about COLA. We’ve even hired a law firm to look at monies we may be owed from other funds that might make it more than $30 billion. So there’s politics involved with all of this. It’s going to be a collaborative effort to get our money, get across the finish line and get COLA back.

“We have complete empathy and understanding of where retired members are coming from. And you know what, if 100 people want to ask me about it, I’ll answer it 100 times. If something wasn’t done that I promised, I will explain why it didn’t happen. But that’s never going to stop me from trying.”

Enough said for now. Ballots for PFRS Retired Members Trustee come out in mid-September. It’s apparent how to vote to get what is best for the system and its members and the best path for them to get the COLA they have been thirsting for.