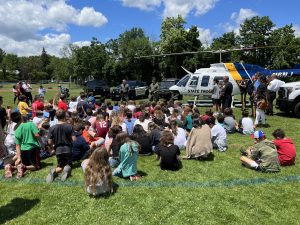 More than 100 sixth graders from Henry B. Whitehorne Middle School in Verona watched the sky on June 9 as the NJ State Police helicopter flew overhead. It landed on the school’s lawn among other police vehicles parked there, like the West Caldwell Police Department Hummer and the Essex Fells Police Department ATV vehicle.

“It’s about the children getting to see police officers in a positive environment,” Martin remarked. “And it was kind of just bridging the gap amongst the different generations.”

While working in Verona schools for the past six years hosting workshops and engaging with students, Martin was inspired to host Police Day to allow students to hear about the work law enforcement officers do every day.

Martin found that students’ experiences with law enforcement officers can be negative, and he wanted to help change that.

“The inspiration is breaking through stereotypes for kids,” Martin explained. “We’re trying to do what we can to go above and beyond and do more positive engagement and positive community outreach. So when there’s a crisis or when they’re having a bad day, they can see an officer and connect and relate a little bit more effectively.”

Watching the children and officers engaging with one another was the highlight of the event for Martin.

“That is the memorable moment,” Martin said. “That moment where I step back and watch them talking, asking, learning and understanding. It’s a building block for their respect and their ability to grow.”