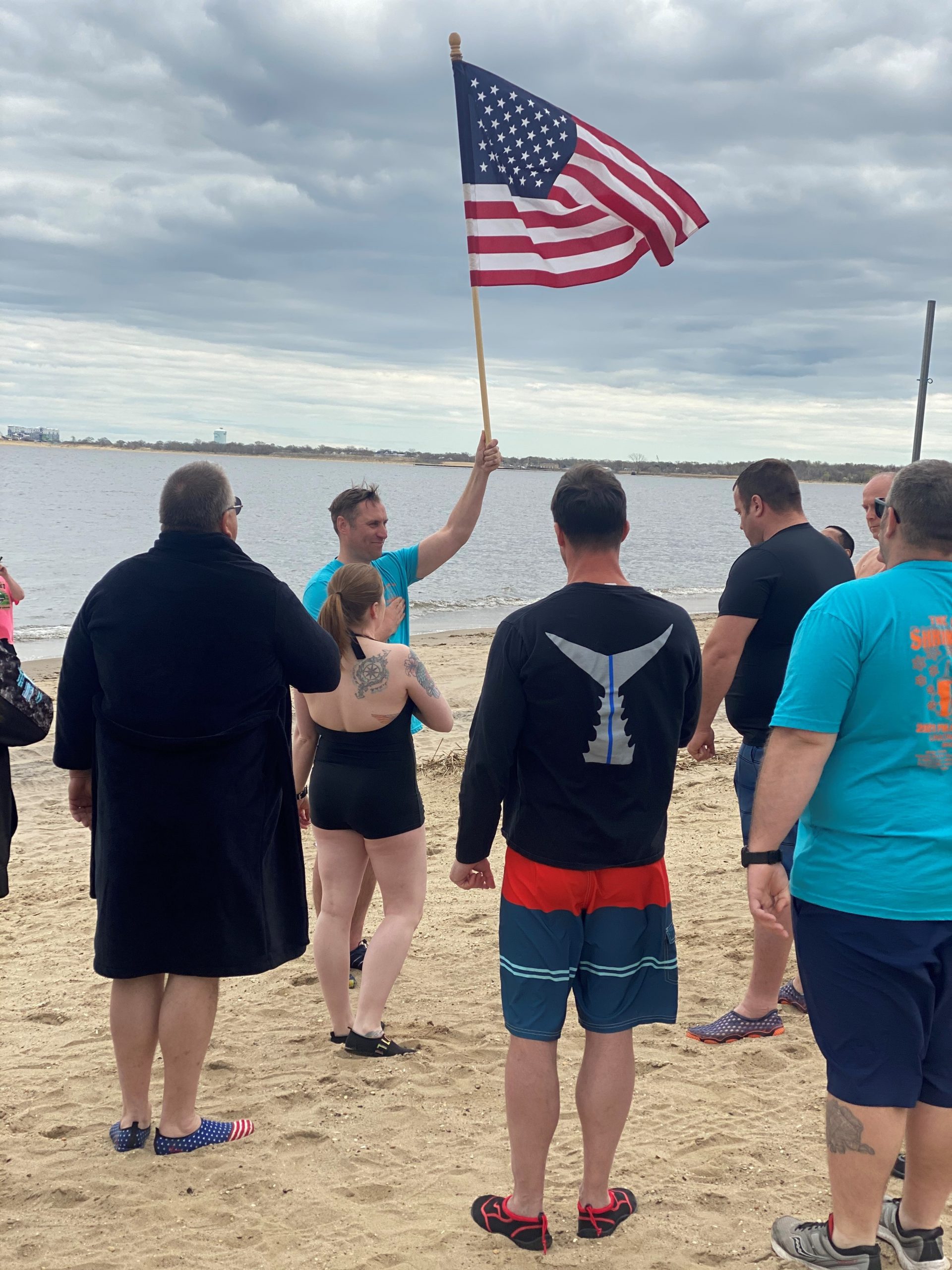 Holmdel Local 239 members salute the flag before taking an icy dip at the beach for the 2021 Polar Bear Plunge.

The 2021 Polar Bear Plunge for Special Olympics New Jersey went virtual this year and did not have its usual thousands of spectators and plungers at Seaside. But that didn’t deter NJSPBA members across the state from raising a total of $74,636 in donations and doing the plunge for the cause anyway.

Several Locals, including Berkeley Township Local 237, Holmdel Local 239, Sayreville Local 98 and South Brunswick Local 166, gathered with their respective teams at different beaches or other locations they created to take the plunge. 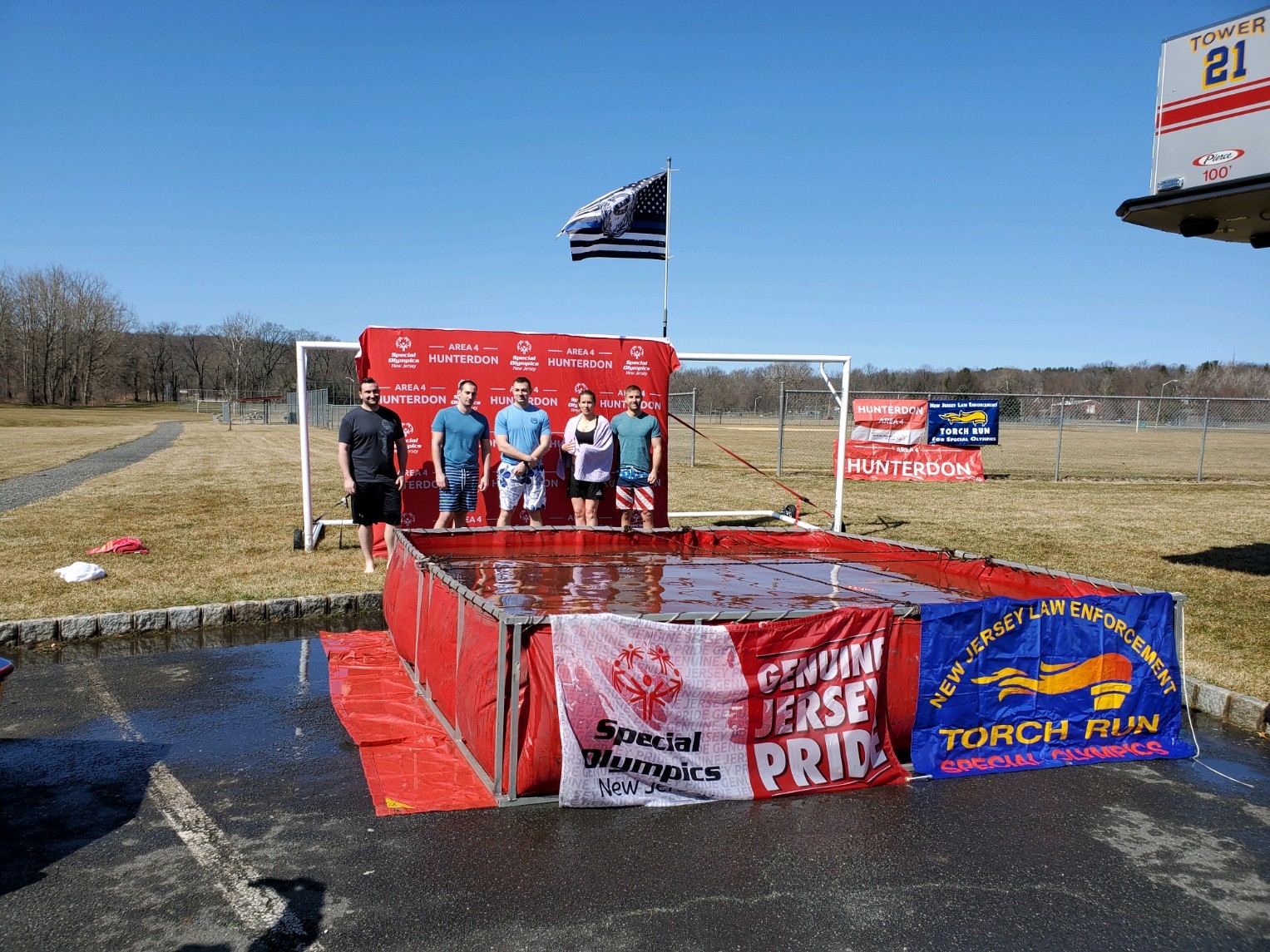 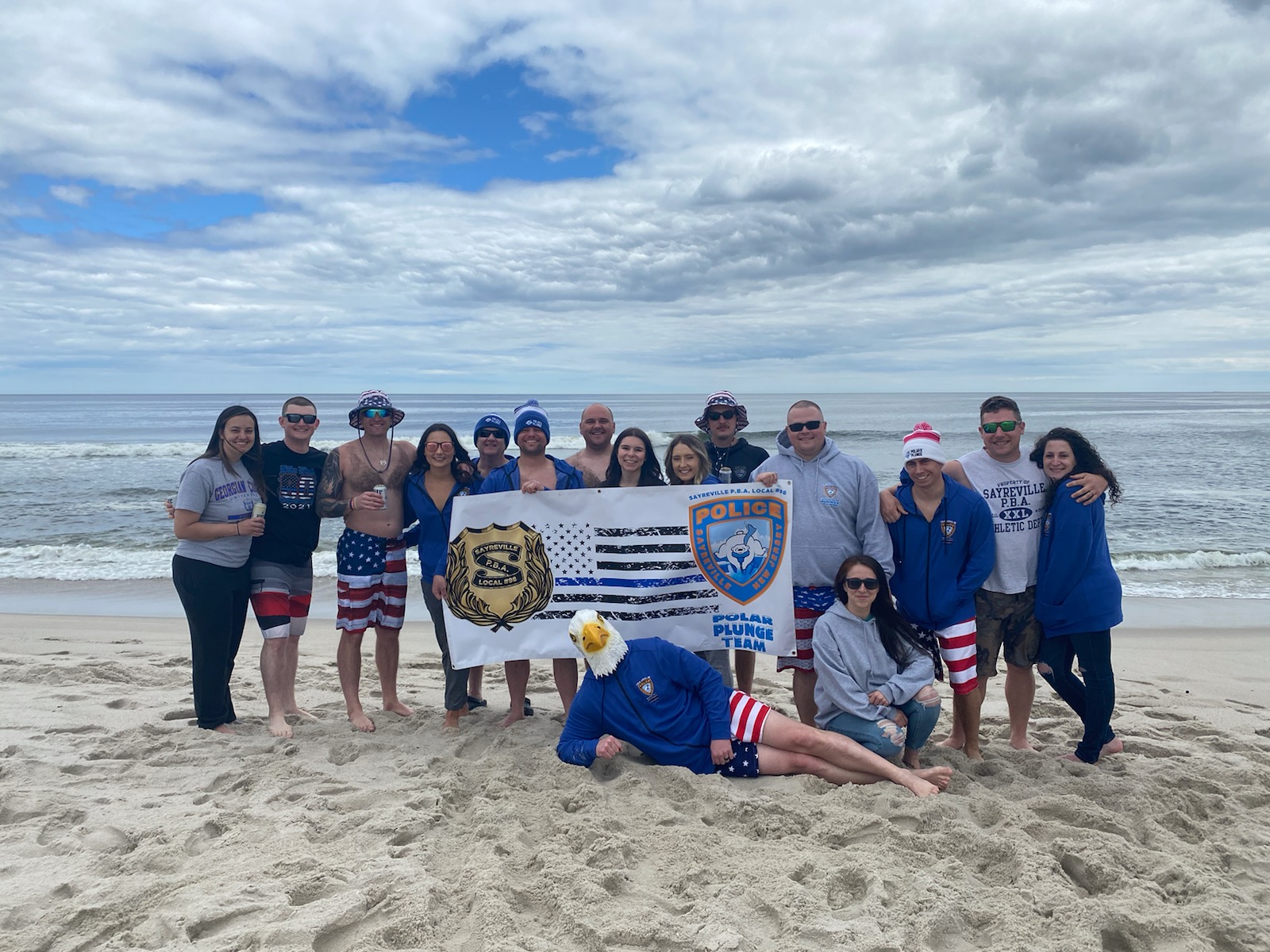 “It just puts that local face on the fundraiser that’s usually so big but made up of all these little people coming together,” explained Local 337 State Delegate Meg Hammond, who is also the PBA liaison for Special Olympics New Jersey (SONJ). “And that’s the true meaning of Special Olympics. It’s a huge community, but it’s all these little intricacies — everybody’s flair, unique personality and passion for competition, sports and community.”

Whatever the method, members of these Locals proved that their dedication to the plunge knows no limits.

This one’s for Coletti 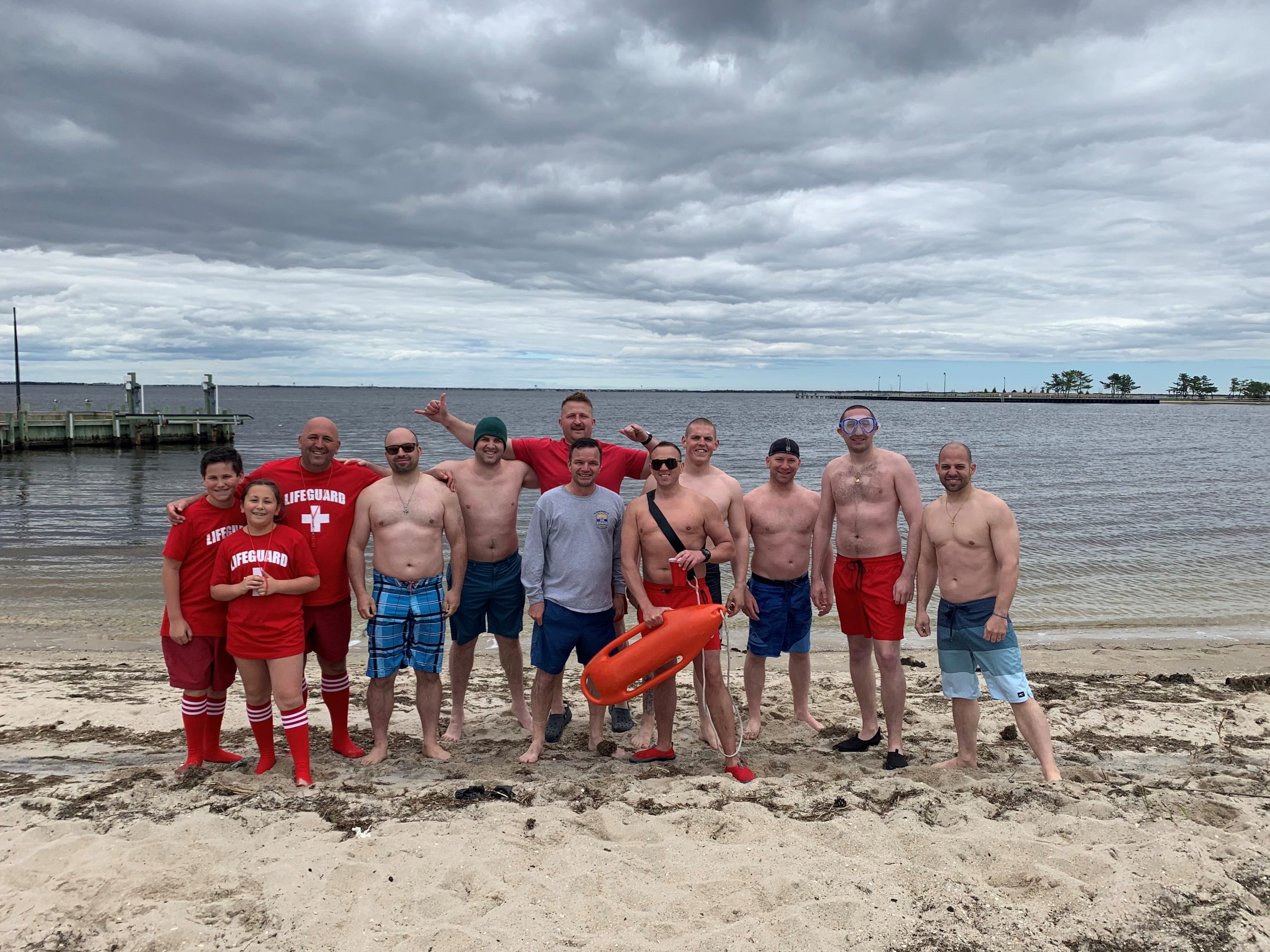 Twenty-seven members of Berkeley Township Local 237 dressed as lifeguards, with one member wearing a snorkel, and headed to the bay. For the past seven years, team members have met at Ryan’s Boulevard Deli & Grill in Seaside and taken the icy dip in the water. James Coletti, a former Special Olympics gold medalist and brother to Local 237 member Patrick Coletti, would lead the team into the water.

“We wanted to keep tradition and [plunge] for the community,” Local 237 State Delegate Christopher Shick mentioned. “It’s really fulfilling when we have him there because he’s benefitted from the Polar Bear Plunge.”

The team, which donated $2,432 to Special Olympics New Jersey, plunged by themselves this year. But they are prepared to be back stronger than ever next year, when hopefully the thousands of participants will be back at Seaside Heights and they will be joined by other Locals.

“Everybody has a great time out there,” Shick noted. “The support from the public that comes out just to watch the plungers is astonishing. I can’t wait to be back.” 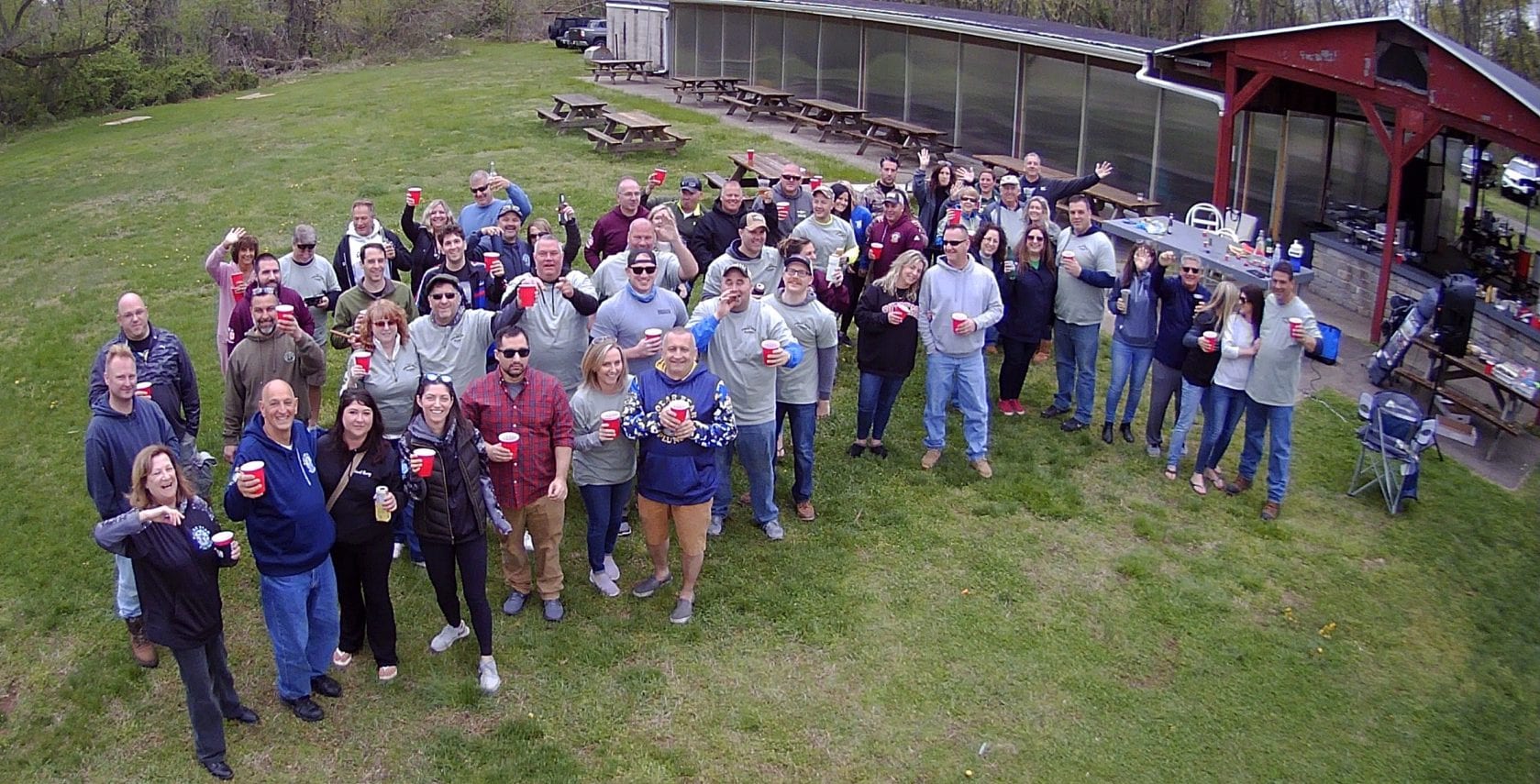 Nearly 50 members of Hamilton Local 66 went to Veterans of Foreign Wars Post 491 to spend the day throwing water balloons and shooting water guns filled with freezing-cold water at each other. They also raised $8,131 in donations for Special Olympics New Jersey.

“It ended up working out phenomenally,” described Local 66 Member Jason Moulds. “As soon as we put the feeler emails out, everybody that’s ever been part of our team couldn’t wait to be a part of it.”

Water guns and balloons sufficed this year. But Local 66 can’t wait to get back for another icy dip to help Special Olympics.

“The water balloons really gave it a fun twist this year,” Moulds remarked. “But I just love jumping in the ocean in the middle of the winter.”

Four Holmdel Local 239 members joined a team of 60 plungers at the Union Beach Pier on April 17.

“We wanted to preserve the tradition,” noted Local 239 State Delegate Mike Michalski, who took his 17th plunge. “And keep it somewhat consistent with what we’ve done. We had enough space for everybody to be safe, and it was a really remarkable event.”

The Local has been participating in the Polar Bear Plunge for 19 years. But for the past several years, they have joined Bayshore Shrinky Dinks, a local Polar Bear Plunge team, to raise donations and take the plunge.

Local 239 Member Eric Hernando, who runs Bayshore Shrinky Dinks, raised $36,000 with his team in just a short period of time.

“They’re usually well over that rate, but it was put together kind of last-minute,” Michalski explained. “But we were successful. It was a group effort, and it all came together. The best part is being able to raise that amount of money for Special Olympics, a cause we feel strongly about.”

Michalski noted that another special tradition for Local 239 is for new members to take the plunge.

“It’s almost like a rite of passage for them,” Michalski described. “It’s kind of a requirement when you get hired here, and that tradition has been carried on. The guys we had to force five or six years ago to do it still come down every year.”

Dunking with an Olympian 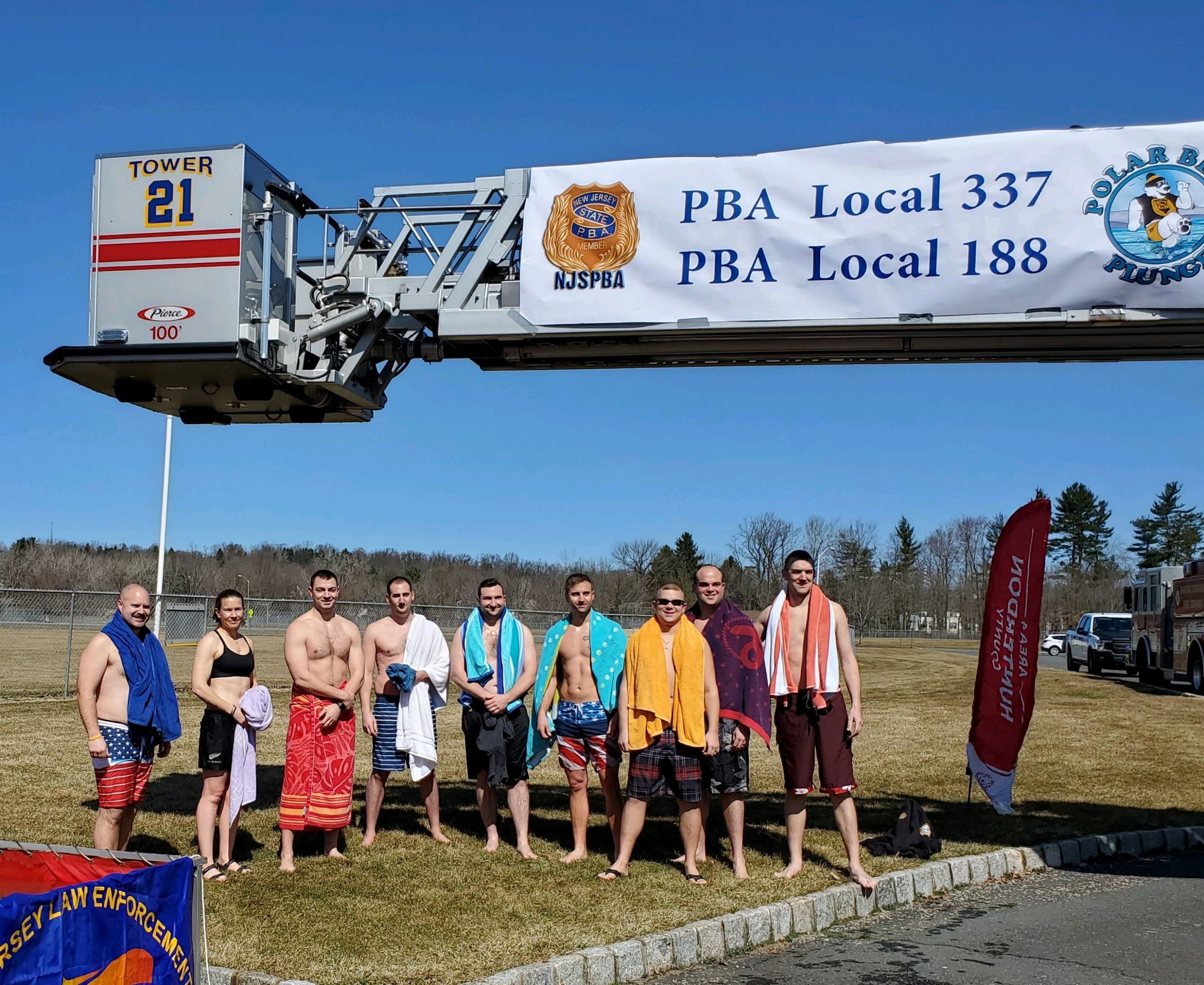 Raritan Township Local 337 members acquired a large water retention basin, normally used to battle forest fires, from the Raritan Township Fire Company for their plunge. Seven members jumped into the basin for the 2021 Polar Bear Plunge, with one doing a cannonball into the water.

Local 337 was joined by five Hunterdon County Local 188 members and SONJ athlete Kyle Leh, whose grandmother Kathy Creveling is the SONJ Area 4 director. Leh was dressed in a polar bear suit and raised a portion of the $3,131 that the Local donated.

Hammond mentioned that the modified plunge has made her want to continue the event on a local scale, separate from the plunge at Seaside Heights.

“I’ll never take away from the Seaside plunge because it’s an amazing experience,” Hammond relayed. “But I think we’re going to continue to do it this way, our little Hunterdon Plunge.”

Sayreville Local 98 members rented a house in Lavallette to take the plunge at Ortley Beach.

“It was definitely different, because it wasn’t with the thousands of people at Seaside,” noted Local 98 Member Steve Maslowski, who has been organizing the team for five years. “But I think it was actually a little better to just be with the [members] and hang out.”

Despite having to revise the event, the members wanted to keep tradition and plunge anyway to keep the momentum of participants strong.

“We have fully grown our team,” Maslowski explained. “We had a small team of two or three guys, and over time we started adding more people. So as a group, we decided we wanted to continue to participate.”

The Local raised $11,177 for Special Olympics New Jersey, with many donations from friends and family. For Local 98, giving back to people with special needs is personal.

“All of us either know somebody or have somebody in our families that has special needs,” Maslowski explained. “So for us to raise money for a cause like this, it definitely felt really good.”

For the right reasons 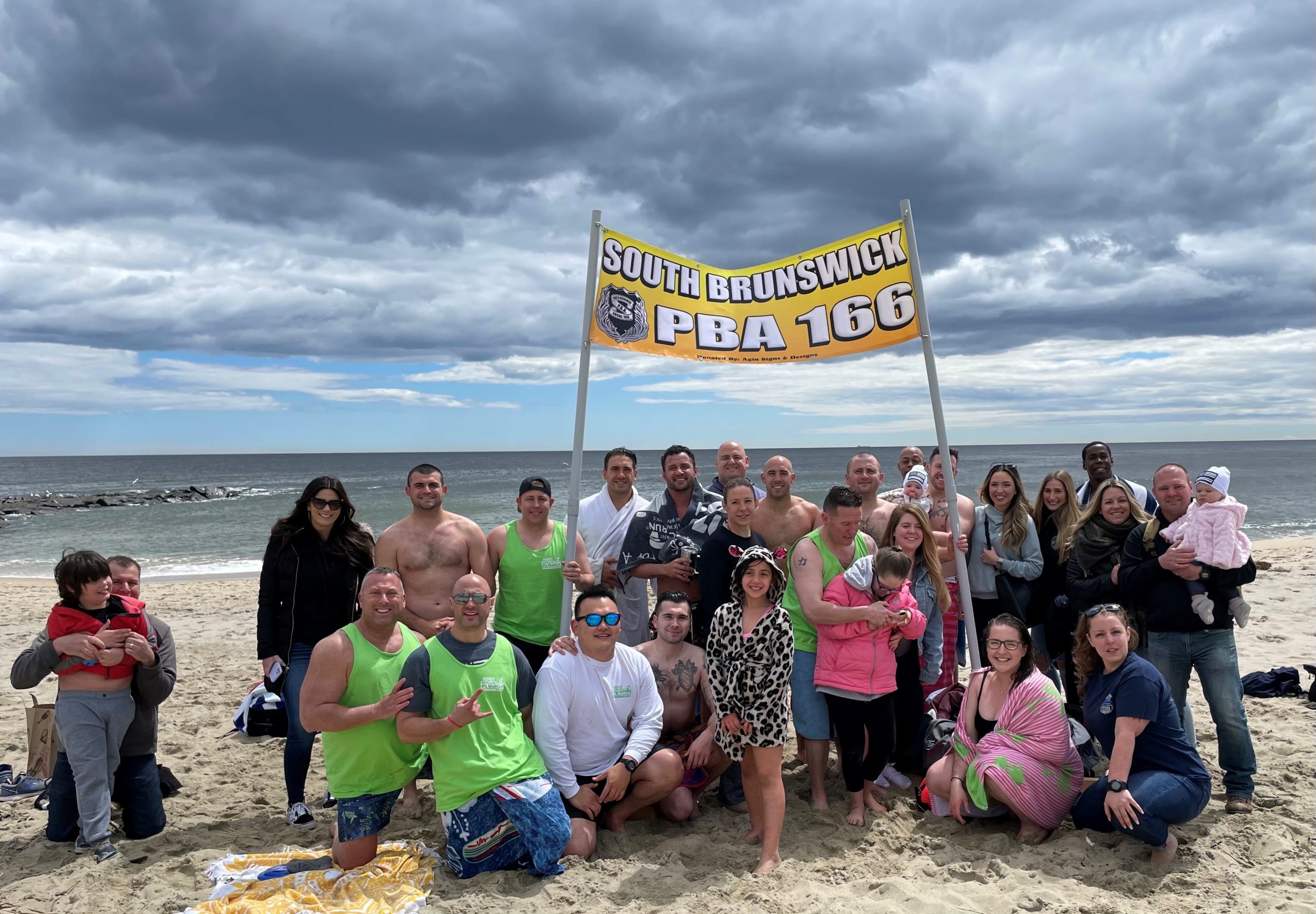 South Brunswick Local 166 members headed to Bradley Beach for their 2021 plunge and made it a family-oriented event.

The Local always participates for member Nathan Labuda’s daughter, Penelope, who is a Special Olympian. This time, Penelope jumped into the water with her father and the other members.

“We’ve seen her grow up, and we know the donations are going to the right place,” confirmed Local 166 State Delegate Brady Shelcusky. “So it’s something we want to continue to help fund.”

To raise the $8,648 they donated, members sent emails to get the word out in advance. They were unable to ask the businesses that they would typically go to for donations due to the financial hardships during COVID-19, so they asked family and friends instead.

“We tried to at least do our part the best we can,” Shelcusky noted. “We know it definitely changes some of these kids’ lives, and just having positive interaction with the police always seems to work out very well.”

We must go on 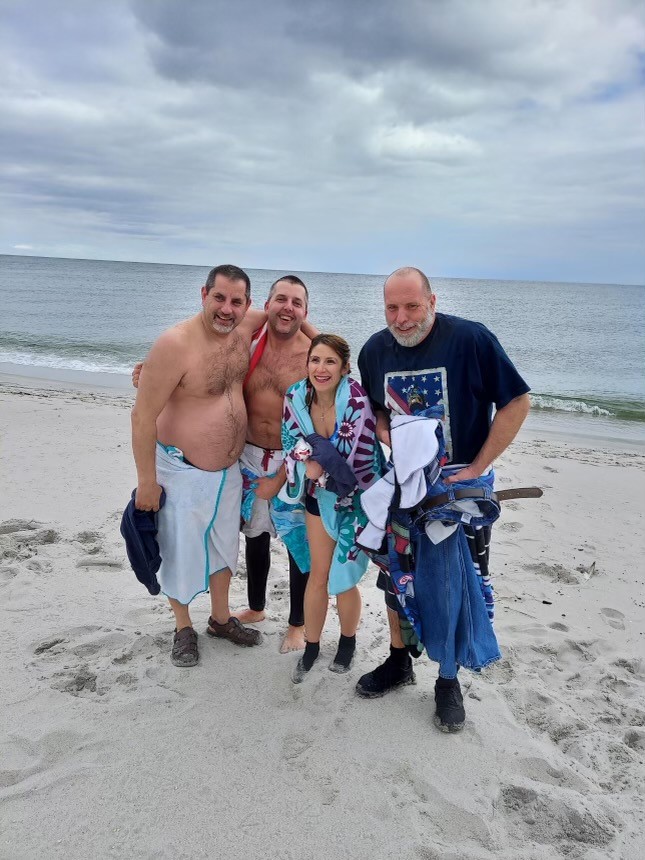 State Corrections Local 105 members signed up to raise money for the 2021 Polar Bear Plunge and generated a donation of $5,117. Then, the 26 members individually plunged for the cause.

Some took an icy dip at a beach. Some jumped in the pool. Others dumped cold water over their heads.

“It was a little easier because you could take your own time to do [the plunge] instead of meeting up on a specific day,” mentioned Local 105 President Bill Sullivan, who has plunged since 2007. “But a lot of our [members] would go to the event at Seaside and hand out medals to the participants, so it means more to them to continue to participate.”