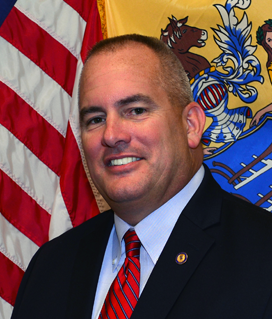 Rob Nixon sums it up best: If you don’t have a seat at the table, you’re probably on the menu. As we finished up another long week at the League of Municipalities 2022 Conference in mid-November, I realized that our collective message of getting your Local involved in politics is finally paying off.

While some of you headed home after the state meeting on Tuesday in Atlantic City, many of you stayed to attend the League events. It was great to see how many of you were connecting with your mayors, council people and county commissioners.

I’ve been touting League attendance for PBA Locals since I was a County Conference chair. In fact, realizing that smaller Locals couldn’t afford a week, our county conference would cover the expenses for two State Delegates to attend the appropriate labor sessions and provide a report at the next county conference meeting.

For those who can’t attend, the League of Municipalities will eventually put recordings or video of all the sessions online. But I’ve been saying it forever: Where else do you get to see your opponent’s playbook? And what you can’t do from home is connect with your local governing body and build relationships.

If you think that contract negotiations only happen every three or four years sitting across a conference room table, you are sorely mistaken and missing the boat. PBA Labor Relations Coordinator Mike Freeman always says that negotiations are about building relationships.

Relationships aren’t built after one or two handshakes on agency turf. They are built over dinner and a few drinks at the League and continuing that relationship for the other 51 weeks of the year. A lot of you are reading this and rolling your eyes at the prospect of doing anything with your governing body. It doesn’t happen overnight, that’s for sure. You need to start somewhere.

Changing lanes, as you will read on page 52 of this issue, I had the opportunity to visit Israel with the Police Unity Tour in October. This position has afforded me some incredible opportunities over the years, but this visit is near the top.

The sense of national pride amazed me. The number of Jewish Americans who have moved to Israel to fulfil the country’s mandatory military service was incredible. “Kids” from Teaneck, Boca Raton, San Francisco and every other corner of our country have chosen to put their lives on hold and serve the Israeli military for at least two years (or two years and eight months.) Some of those I met were getting ready to re-up to continue their service. It was humbling, to say the least.

Police Unity Tour founder Pat Montuore went with us this year and had the opportunity to see where he had a heart attack during his last visit there and meet those who saved him. It was a trip I’ll never forget.

Stay safe and start making plans for next year’s League of Municipalities Conference. Start building your relationships today. Or get used to being on the menu!